Even though the Skywalker Saga wrapped up with 2019’s The Rise of Skywalker, Disney+’s The Mandalorian has shown there are plenty more great stories for fans to discover in the Star Wars universe. With its eclectic planets, epic fight scenes, and one adorable baby, it’s a rollicking sci-fi adventure that appeals to superfans and newcomer alike. If you’ve finished the first two seasons of the series and are looking for more Mando content, here are 21 The Mandalorian behind-the-scenes facts that are truly out of this world.

Set five years after Return of the Jedi, the first live-action Star Wars show follows an intergalactic mercenary known as a Mandalorian (aka Mando), who’s played by Pedro Pascal. What starts off as a simple one-off job becomes much more complicated when Mando encounters an adorable baby of Yoda’s species (lovingly dubbed "Baby Yoda" by fans) with strong Force abilities. With remaining members of the evil Empire in pursuit, Mando and his allies must fend off their enemies to help Baby Yoda become strong in the Force.

A lot went into making The Mandalorian, from high-tech virtual sets to ensuring Baby Yoda looked just right. Here’s everything you need to know about how the cast and crew told a new story within a galaxy far, far away: 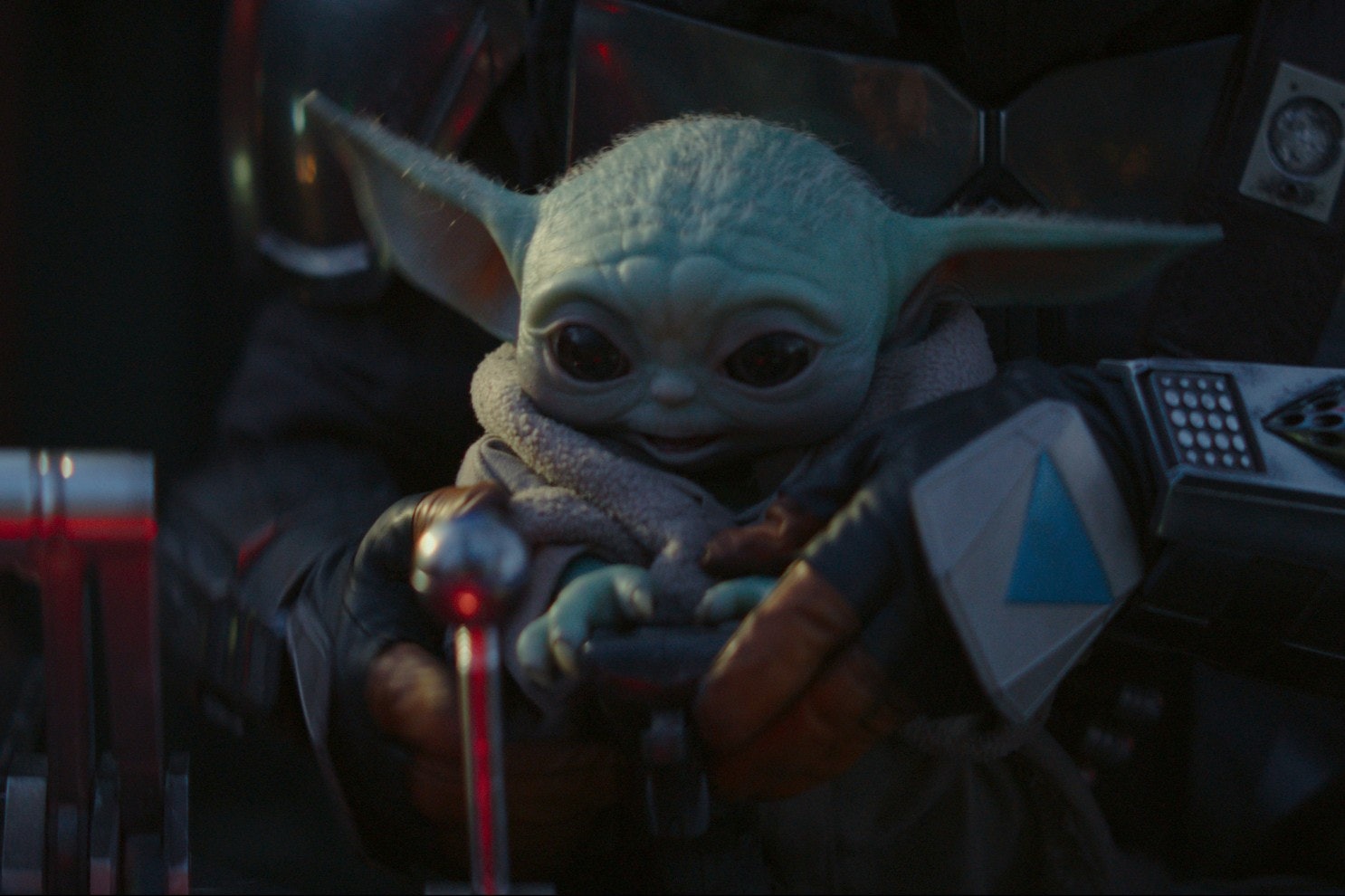 Special effects company Legacy Effects created the Baby Yoda puppet, and Episode 3 of the behind-the-scenes show Disney Gallery: The Mandalorian revealed that a number of Legacy puppeteers also brought him to life. One puppeteer controlled Baby Yoda’s eyes, another handled his head and body, a third was in charge of his mouth and ears, and a fourth person was responsible for moving his body and arms.

Chow directed Episodes 3 and 7 of Season 1, making her the first woman to direct a live-action Star Wars adventure in the franchise’s 43-year history. She was closely followed by Bryce Dallas Howard, who directed Season 1, Episode 4.

3. Oscar Isaac convinced Pedro Pascal to star in the show.

Isaac, who plays pilot Poe Dameron in the Star Wars sequel films, takes credit for getting his friend Pascal to put on his Mandalorian armor in the first place. "You’re welcome. I convinced him to do [the show]," he said during a WIRED interview featuring the two actors.

4. A lot of ‘The Mandalorian’ was filmed using virtual sets.

Working with Epic Games, VFX studio Industrial Light & Magic created groundbreaking virtual sets to make the crew and actors feel like they really were in a galaxy far, far away. To make things even more realistic, the set moved whenever the actors and camera moved.

5. CGI is hardly ever used for Baby Yoda. 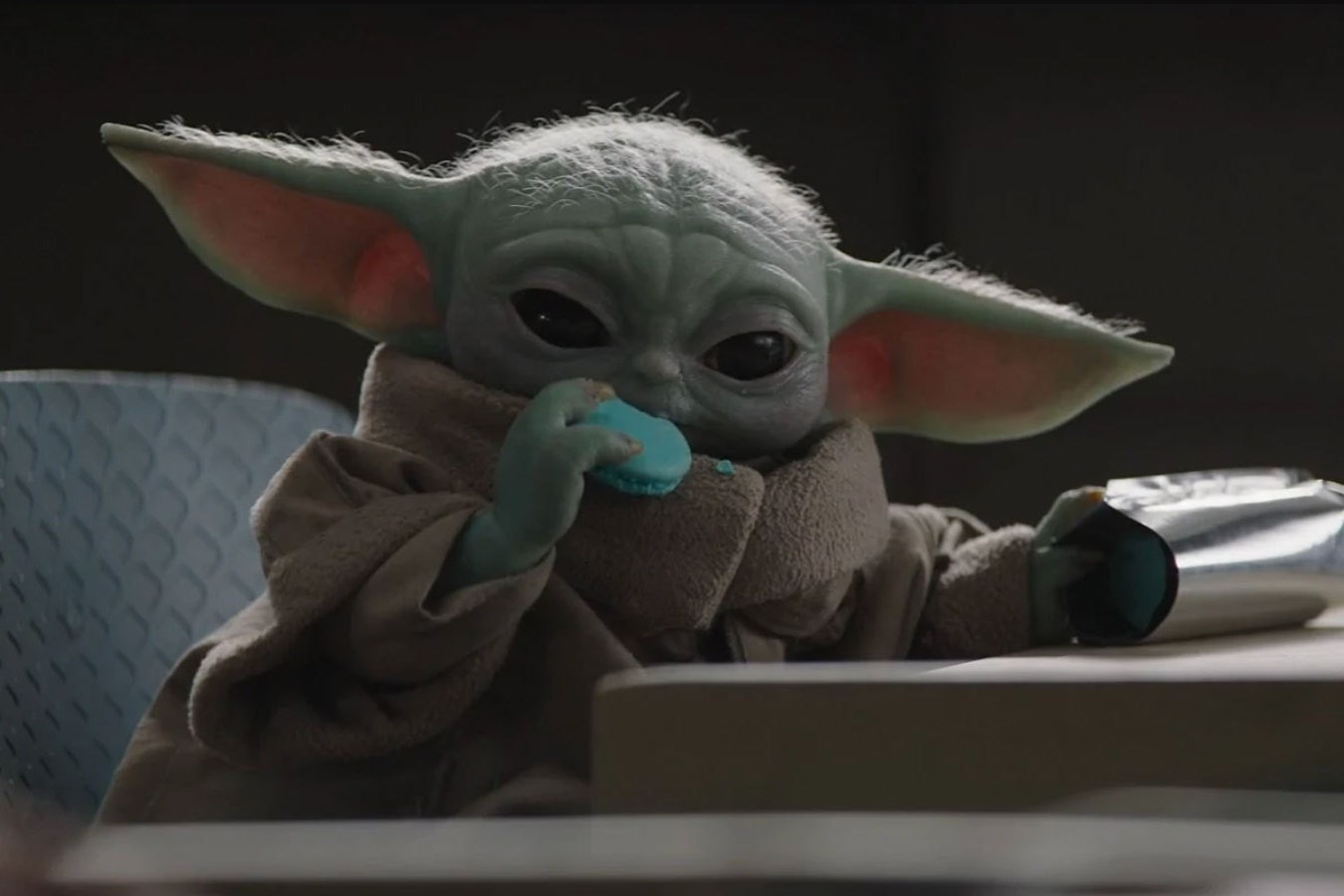 Favreau told The Hollywood Reporter that when the show has to use CGI, they try to make Baby Yoda obey the same “physical laws” that a puppet would. “I think a lot of times CG makes itself too obvious where you don’t create parameters creatively that allow the character to keep the same identity and charm,” the director said.

Comedy actors Jason Sudeikis and Adam Pally were particularly cruel toward everyone’s favorite Mandalorian character when they guest-starred as Stormtroopers. After Baby Yoda bit them, they hit the poor little guy before droid IG-11 saved the day. Fans were hilariously outraged.

When Pally filmed the scene in which his Stormtrooper character punches Baby Yoda, Favreau took a moment to remind him just how precious the puppet really is.

"[Favreau] said, ‘I just want you to know that this is the [main] Yoda and it costs, like, $5 million," Pally told Entertainment Weekly. 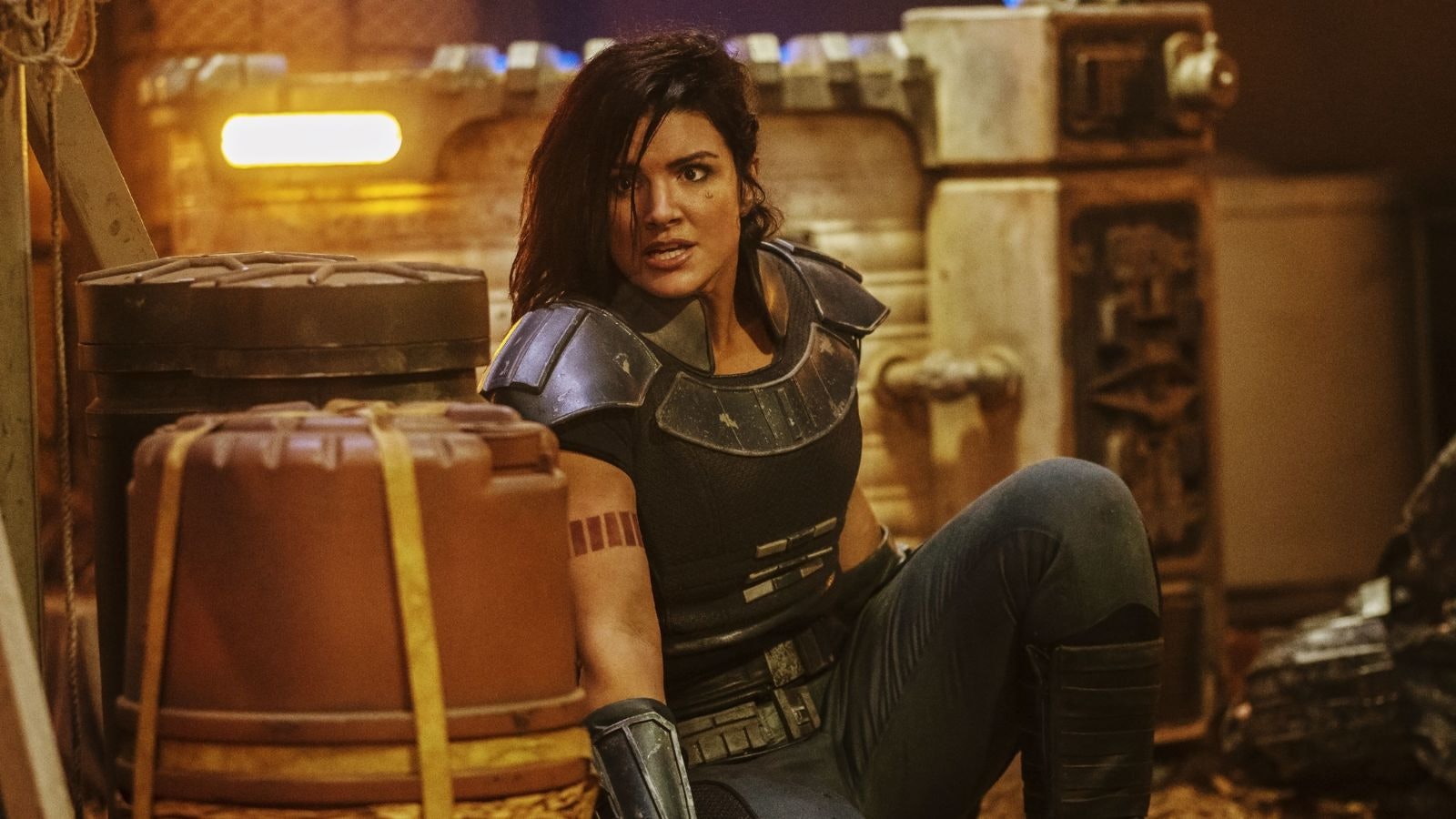 During an interview on Vanity Fair’s "Still Watching" podcast, Carano confirmed that Favreau didn’t even audition anyone else for the part. He even named the character after her, deriving the name "Cara" from the actor’s last name.

9. Werner Herzog had never seen a ‘Star Wars’ movie before booking ‘The Mandalorian.’

It turns out, playing The Client was actor and acclaimed documentary filmmaker Werner Herzog’s first experience with a galaxy far, far away. “I have to confess, I never saw a single [Star Wars] movie,” Herzog said in an Associated Press interview.

The actor couldn’t physically film the episode because he was in rehearsals for King Lear on Broadway. Instead, stunt actors Brendan Wayne and Lateef Crowder stood in as Mando, and Pascal recorded his lines for Episode 4 later.

11. A lot of Hollywood A-listers visited the ‘Mandalorian’ set.

Big Hollywood names like Steven Spielberg, Seth Rogen, and the Coen brothers all stopped by to see what was going on at the Mandalorian set. One extra special guest was Star Wars creator George Lucas, and Favreau later shared a sweet photo of Lucas cradling the Baby Yoda puppet.

12. Pascal originally thought he was going to play Boba Fett.

Pascal admitted during his initial meeting with Favreau that he saw the concept art for Mando and assumed that the director was going to ask him to play Boba Fett, a well-known bounty hunter first introduced in the original trilogy.

"Jon just looked at me and said, ‘You’re the Mandalorian,’" the actor told ComicBook.com. "I couldn’t have imagined a better moment."

13. Carano thought she would play a Wookiee.

"I thought I was going to be, like, the female Chewbacca," Carano told Vanity Fair, referencing her muscular, MMA fighter physique.

"I was ready to put on the fur outfit and be the female version of that," the actor continued. "That’s what I thought. I was surprised to find that I was one of the few people that you were actually going to see her face."

Mando gets into his fair share of high-stakes fights on the show, meaning stunt backup was incredibly necessary to bring his character to life. It turns out, two stunt doubles actually fill in for Pascal: gun expert Brendan Wayne and hand-to-hand combat pro Lateef Crowder.

15. Pascal was injured right before filming the scene on which viewers see Mando’s face.

In Disney Gallery Season 1, Episode 3 ("Cast"), Pascal revealed that right before filming the moment from the Season 1 finale, in which Mando finally takes his helmet off, he accidentally hurt himself by walking into a piece of plywood. The actor ended up needing seven stitches, resulting in the gnarly wound on Mando’s face during the scene.

Baby Yoda’s cuteness may have taken over the internet since The Mandalorian‘s release, but it took a lot of sketches to come up with the right look.

Favreau explained in the Disney Gallery episode "Practical" that "some [drawings] were too cute, some too ugly, some were the wrong proportions."

Even when the team decided on a design, it took at least three months to develop the main puppet.

In Disney Gallery Season 1, Episode 5 ("Practical"), The Mandalorian prop master Josh Roth noted all of the characters’ weapons were inspired by World War II guns. "[For the original trilogy], they rented surplus weapons from World War II and modified them," Roth explained, adding that Mandalorian takes place shortly after those films.

Mando’s signature weapon is a Pulse Blaster, a deadly rifle that can electrocute his opponents. In the Disney Gallery "Connections" episode, Favreau said the Mandalorian team was inspired to include the weapon after seeing an animated Boba Fett wield it in 1978’s Star Wars Holiday Special.

20. Baby Yoda’s voice was made using a mix of animal and human baby sounds.

According to sound editors David Acord and Matthew Wood, Baby Yoda’s voice was initially created using recordings of two animals: a bat-eared fox and a kinkajou. But when Favreau asked for his voice to sound more "relatable," they also incorporated human baby vocals. 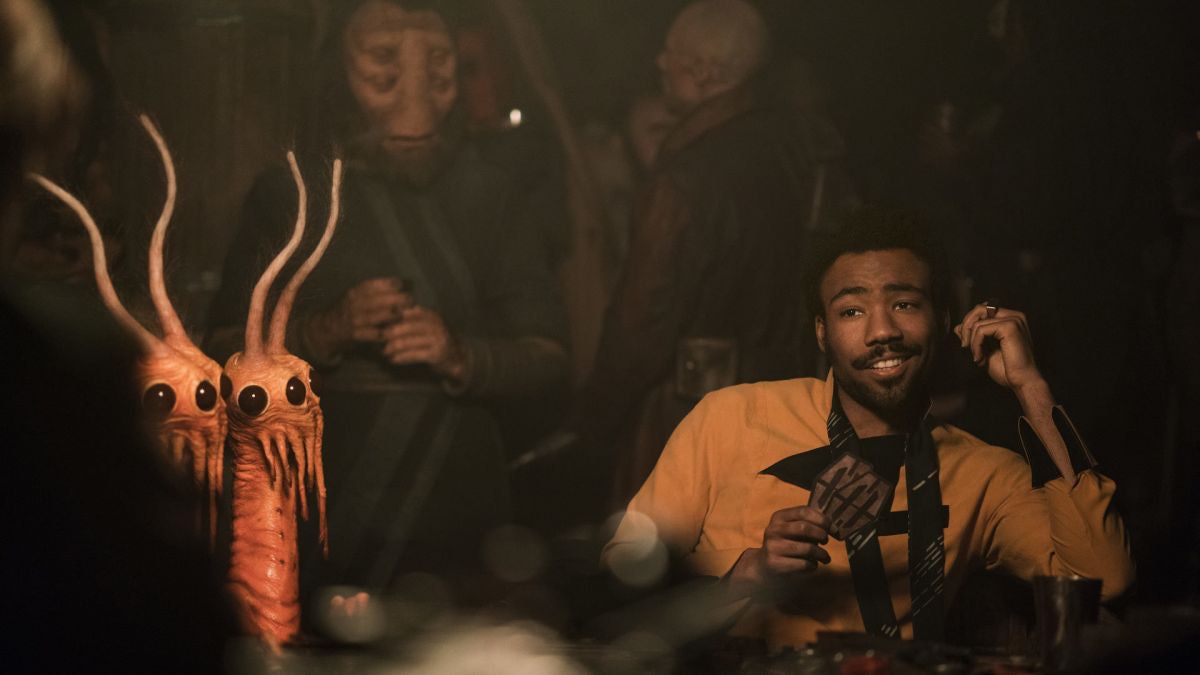 Favreau told The Hollywood Reporter that Glover gave him the idea to keep Baby Yoda a secret while they were working on 2019’s The Lion King.

"We were talking about music and pop culture, and he was saying that what people really like now is to be surprised, because it didn’t happen much," the director said. "Just putting it out there spurred a conversation that would become more viral and bring more genuine attention than any marketing."

The Mandalorian is on Disney+ now.