Back on? Sofia Richie, 21, reunites with Scott Disick, 37, again

Sofia Richie, 21, once again reunites with Scott Disick, 37, at his Hidden Hills home as ex Kourtney Kardashian, 41, shares an article on cheating

Scott Disick and Sofia Richie appear to have reunited once again after ending their nearly three-year relationship in May.

On Sunday, Sofia, 21, shared an Instagram video from inside 37-year-old Scott’s Hidden Hills home, as she revealed she was having a cosy night in watching Zac Efron’s new Netflix show Down to Earth by the fire.

The second sighting comes after the former couple spent fourth of July together in Malibu, sparking rumors they might be back on, and on Monday, Scott’s ex Kourtney Kardashian also raised eyebrows by sharing an article about cheating on her lifestyle website Poosh – with the caption ‘hmmmmm.’ 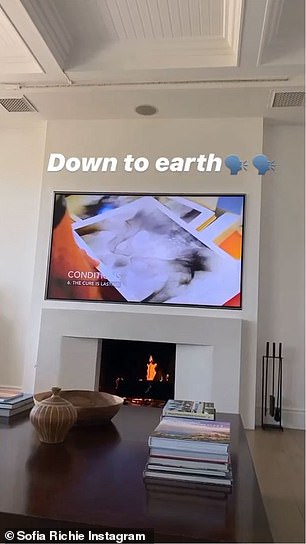 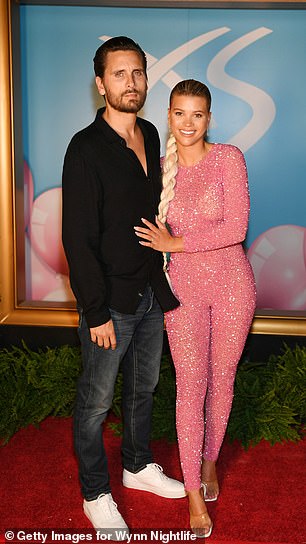 Back on? Sofia Richie, 21, shared an Instagram Stories snap of Scott Disick’s Hidden Hills home (left) sparking more rumors she is back together with the 37-year-old 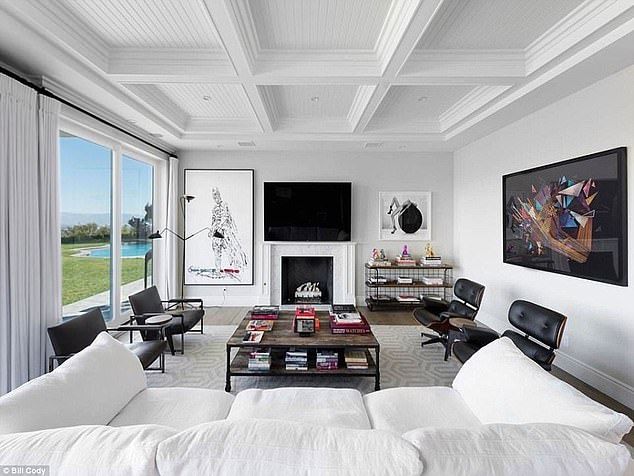 Spot the difference: A view of Scott Disick’s living area at his Hidden Hills home where it appears his ex Sofia has been relaxing at over the weekend

Since splitting with Sofia, Scott had been spending more time with his ex-Kourtney, – 41, with whom he shares three children Mason, 10, Penelope, eight, and Reign, five – which also sparked rumors that they could be getting back together.

Scott and Kourtney spent his 37th birthday together in May in Utah with their kids, and were also seen dining at Nobu together the following month. Kourtney recently revealed that she has collaborated with Scott on his Talentless brand by designing a new hoodie.

However, in the past few weeks Sofia has also been pictured wearing one of Scott’s Talentless hoodies, which has caused much confusion among fans of the reality stars. 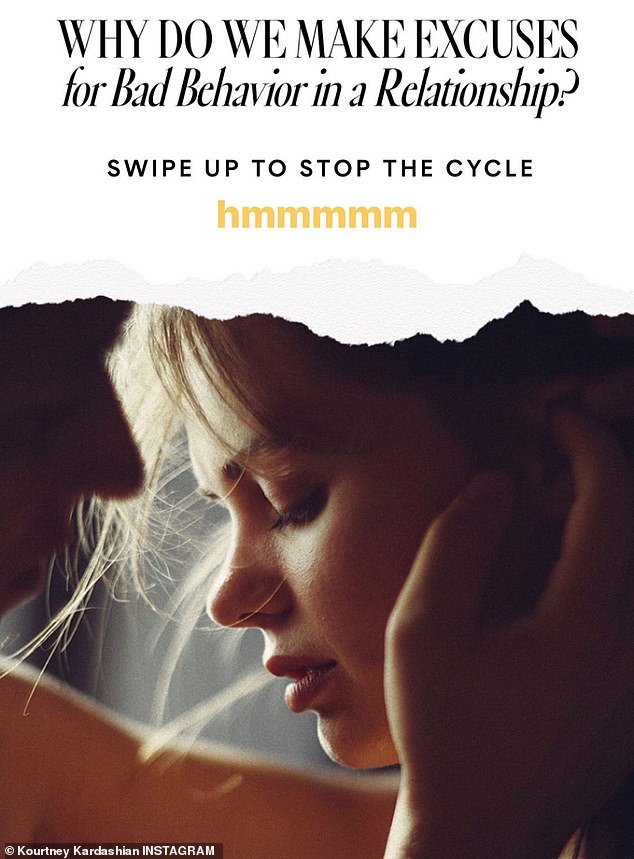 Poignant? Kourtney Kardashian appeared to be pondering ‘bad behaviour’ in a relationship on Monday, as she shared this article from her lifestyle website Poosh 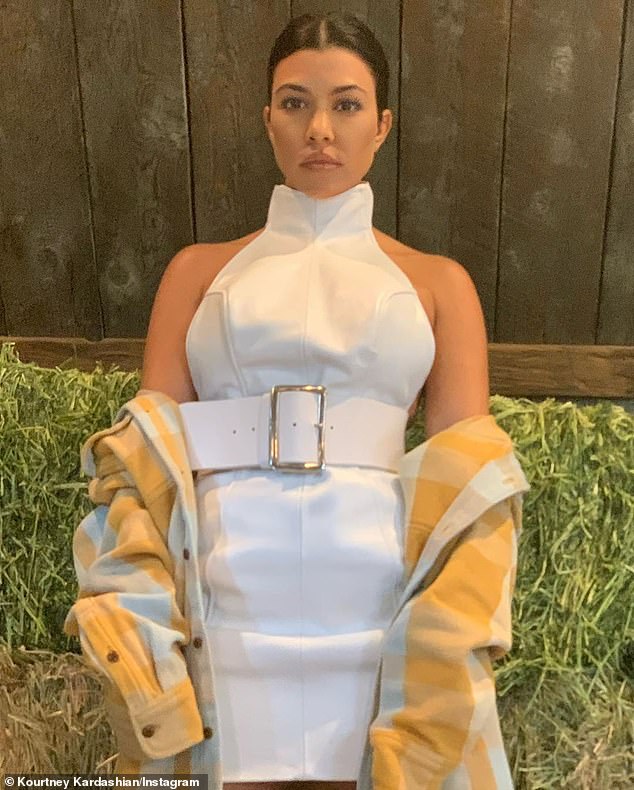 What’s going on? Kourtney, 41, had been spending more time with her ex Scott Disick in recent months, after he broke up with Sofia, 21, in May

Kourtney made a point of sharing an article on her new lifestyle website on Monday, with a headline that read: ‘Why Do We Make Excuses for Bad Behavior in a Relationship?’ she seemed to be pondering the question herself as the captioned over it with a ‘hmmmmm.’

The article details a personal story about a narcissistic abusive ex, who it turns out, was not faithful in the relationship.

Kourtney shared the experience of the woman who had written the article, that said she still longed for her ex-partner even after all the crazy things he had done, including an ‘accumulation of shady lies, cheating and manipulation.’ 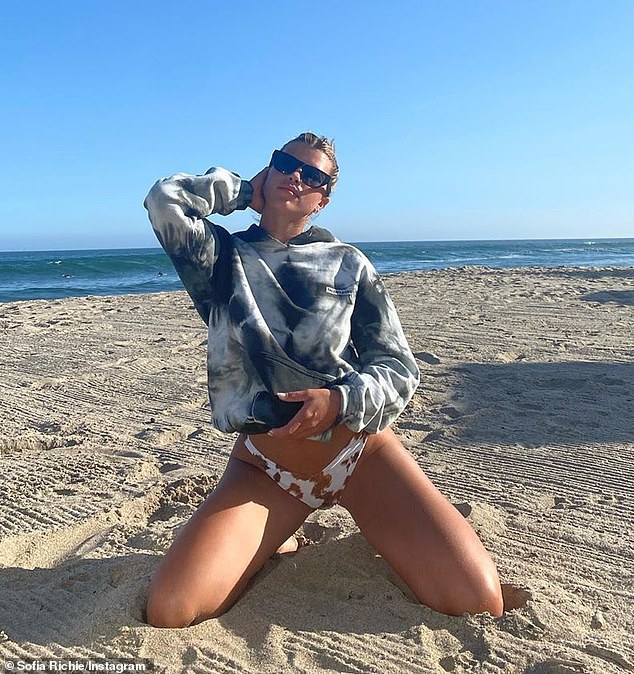 Ex-factor: Sofia RECENTLY posed in one of Scott’s Talentless hoodies in a sexy beach snap earlier this month, just weeks after Kourtney wore her ex’s flannel 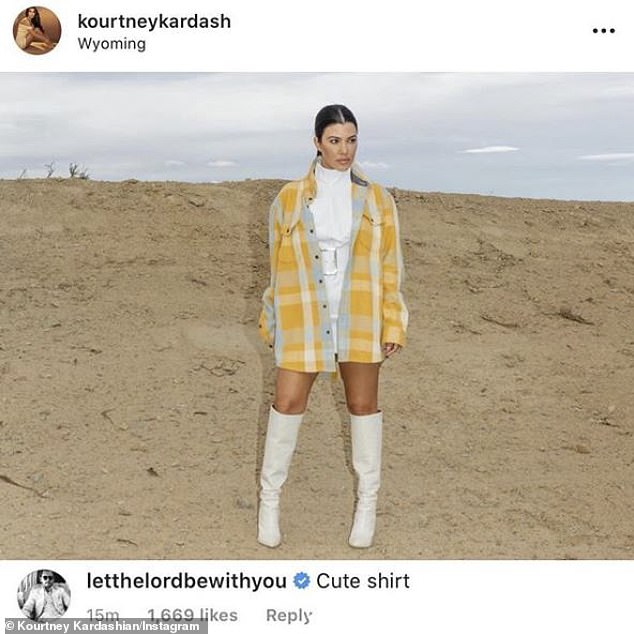 A tale of two tops: Scott sparked romance rumors recently when he commented on another photo of Kourtney wearing a ‘cute shirt’ that belonged to him

Scott caused the rumor mill to go into overdrive himself last month, when he posted a flirty comment on Kourtney’s Instagram saying ‘Cute shirt’ highlighting the fact that she was wearing his item of clothing.

The pair’s display of affection on social media triggered rumors and reports that there could be another reconciliation on the cards between the on/off couple – who first dated from 2006 to 2015.

But the rumors quickly fizzled out when Scott and his ex Sofia – the daughter of Lionel Richie – were spotted together over the fourth of July weekend in Malibu.

An insider recently told Us: ‘There’s always been a chance that Scott and Sofia could rekindle their relationship and Scott knows that Sofia is good for him.’

The source added: ‘But her friends and family aren’t sure if he is also good for her.’