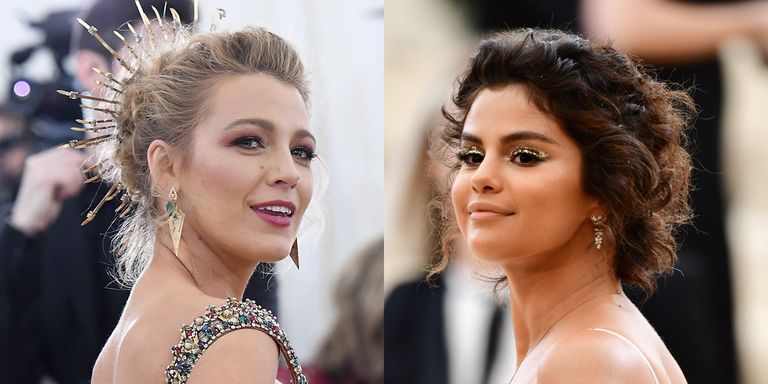 Blake Lively and Selena Gomez’s Met Gala dresses were meant to make an impression—but if that wasn’t enough, the two snuck two very different messages into their looks. Lively’s was on her clutch, and it was a nod to her husband Ryan Reynolds, who didn’t attend the gala with her Monday, and their two daughters James and Ines.

Lively’s Judith Leiber clutch was decorated with gems creating a family cross. “Reynolds” was written on the bottom, and the family’s initials B, J, I, and R were the cross’s four points. Very on-theme and complementary to Lively’s Renaissance princess-esque Versace dress:

Lively hinted some special accessories were coming when she told Women’s Wear Daily in March about her Met Gala look. “I just sent Lorraine Schwartz and Christian Louboutin my dress, and said, ‘Okay let’s do something special,'” she said then. “They’re making something custom for it. So it’s kind of nice, because I have a bunch of artists around me who I have direct relationships with. It’s sort of a group effort with that. I rely on people who do that for a living rather than outsourcing it to someone else.”

Gomez, meanwhile, went straight-up biblical with her dress and bag. She handwrote a Bible verse, Proverbs 31:30, and Coach embossed it on the bag she carried. It was also sewn in ribbon to the train of the dress. The verse reads, “A woman who fears the Lord is a woman who shall be praised.”

Embossed by us, hand-written by Selena. A closer look at the custom Kisslock Frame bag #SelenaGomez wore to the #MetGala. #CoachxSelena #CoachNY