She recently enjoyed a relaxing trip to the South of France with beau Brad Pitt.

And Nicole Poturalski was back to work as she strutted along the Hugo Boss catwalk during Milan Fashion Week on Friday.

The model, 27, looked sensational as she flaunted her toned figure in a black maxi dress with a plunging neckline and long sleeves. 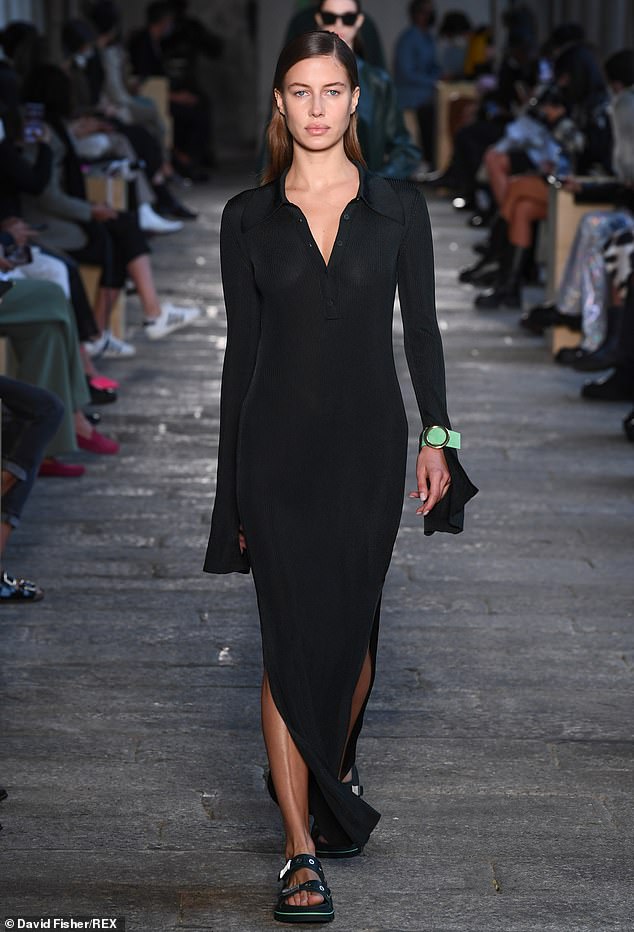 Stunning: Nicole Poturalski looked sensational as she strutted along the Hugo Boss catwalk during Milan Fashion Week on Friday

Nicole exuded confidence as she walked during the show, completing her simple yet stylish ensemble with strap sandals.

As she made her way along the catwalk Nicole flashed a glimpse at her bronzed legs through her dress’ side splits.

The stunner added a splash of colour to her outfit by donning a mint green bracelet with a large silver buckle at the front.

Just like the other models, Nicole wore her long brunette locks down and perfectly slicked back off her face with a side parting. 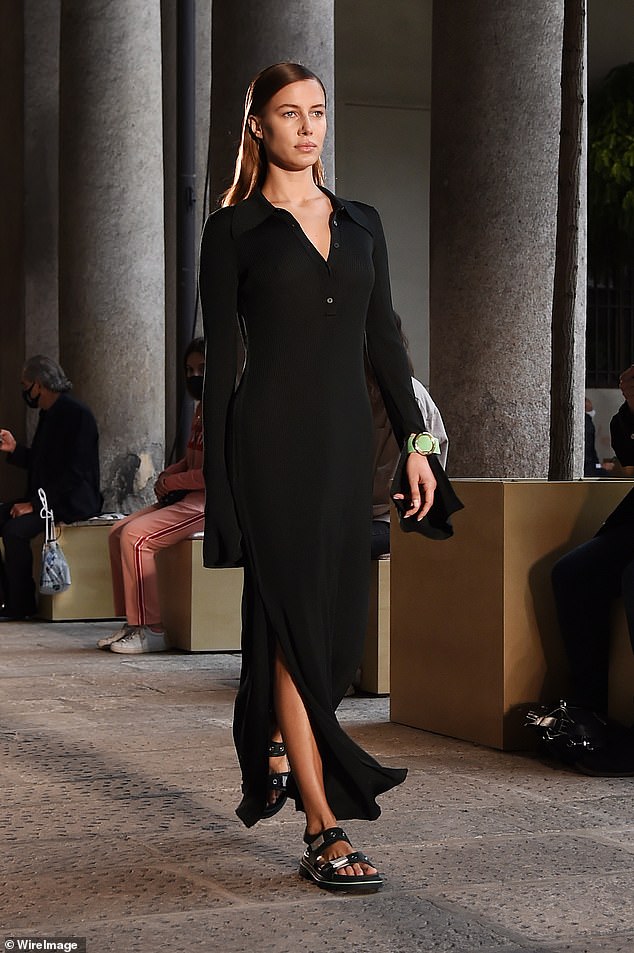 Beauty: The model flashed a glimpse at her bronzed legs through the splits at the side of her fitted dress 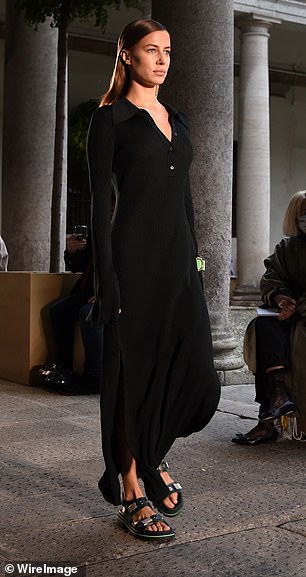 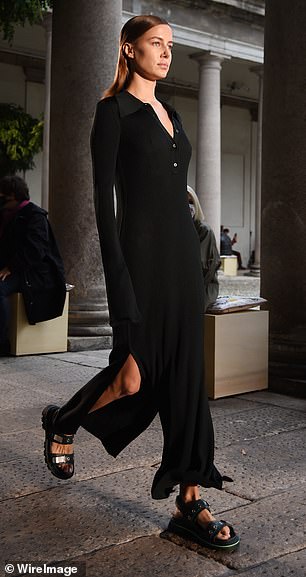 In action: She exuded confidence as she took to the catwalk during the star-studded show 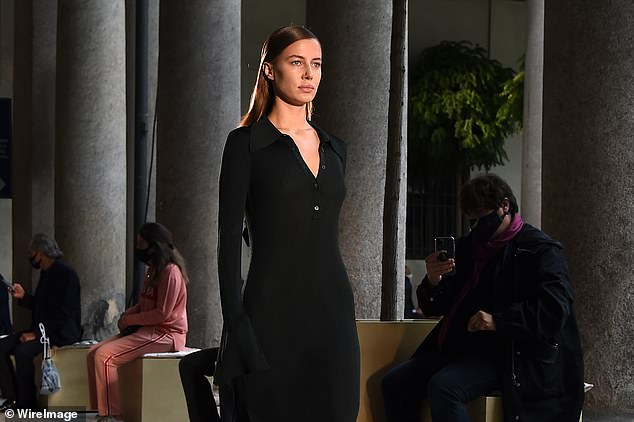 Fashion: Guests to the show sat on spaced out blocks and wore face masks as they admired Nicole’s outfit on the runway

The beauty added a touch of makeup, including a slick of mascara and nude lipstick to accentuate her pretty features.

Also seen at the Hugo Boss show was Suki Waterhouse, who wowed in a cream ensemble of a trench coat, top and trousers.

Model Irina Shayk also looked sensational as she walked the Hugo Boss catwalk in a utility-style outfit with square shoulders. 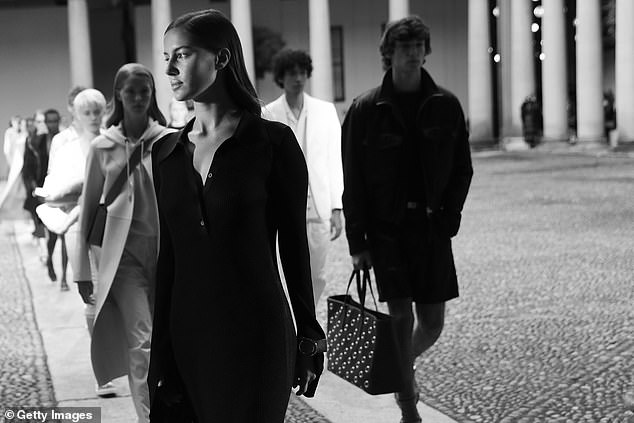 Style: Nicole’s dress boasted a plunging neckline with several buttons along the seams 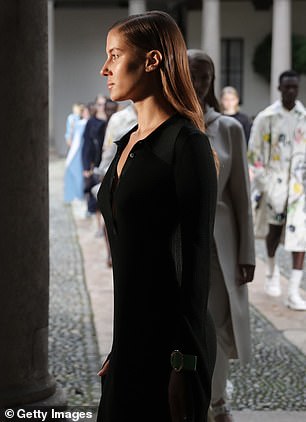 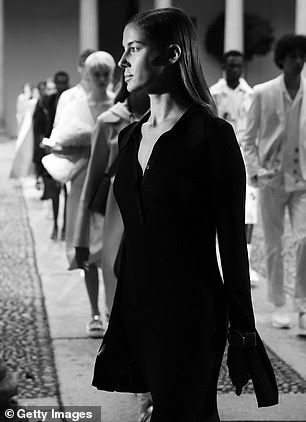 Slick: Nicole wore her brunette locks tucked behind her ears 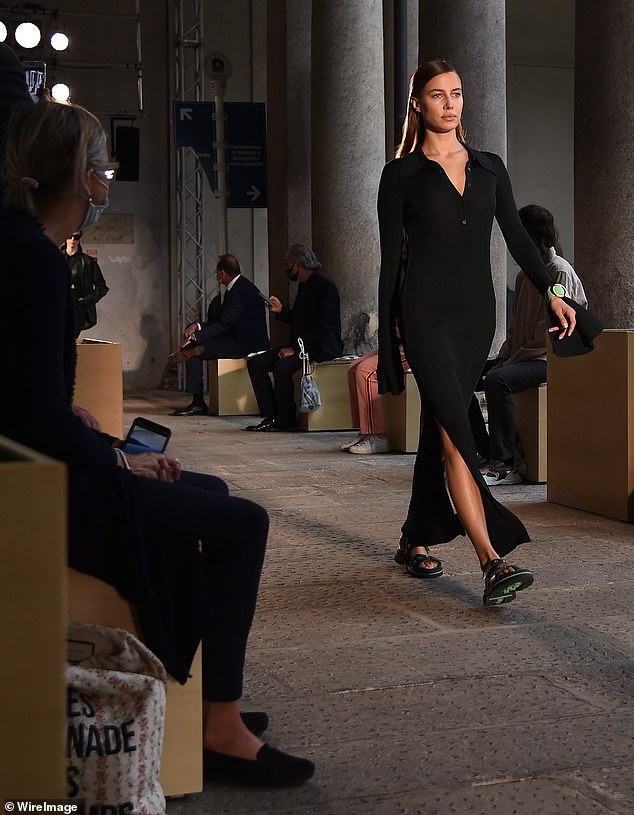 In the zone: Nicole looked every bit the professional model as she strutted her stuff

Hugo Boss’ colourful also show boasted a selection of shades including greens and red as well as denim garments and long coats.

Several models took to the catwalk, flaunting their svelte figures in silk dresses and tailored suits, with them all wearing similar open-toe shoes.

Milan Fashion Week is being held as a breakthrough for Italy, seven months on from when the country dealt with the devastating effects of coronavirus. 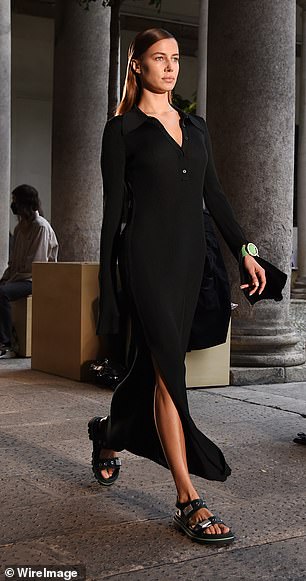 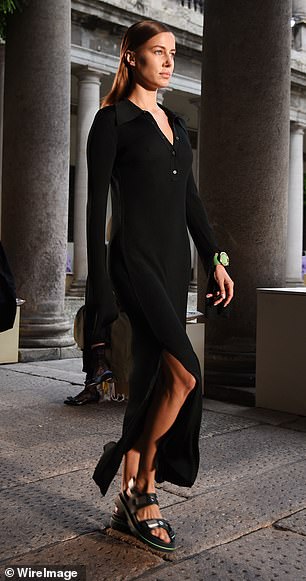 All in the details: All of the models donned open-toe sandals which crossed over on the top of their feet, with Nicole being given a black pair with a silver detailing 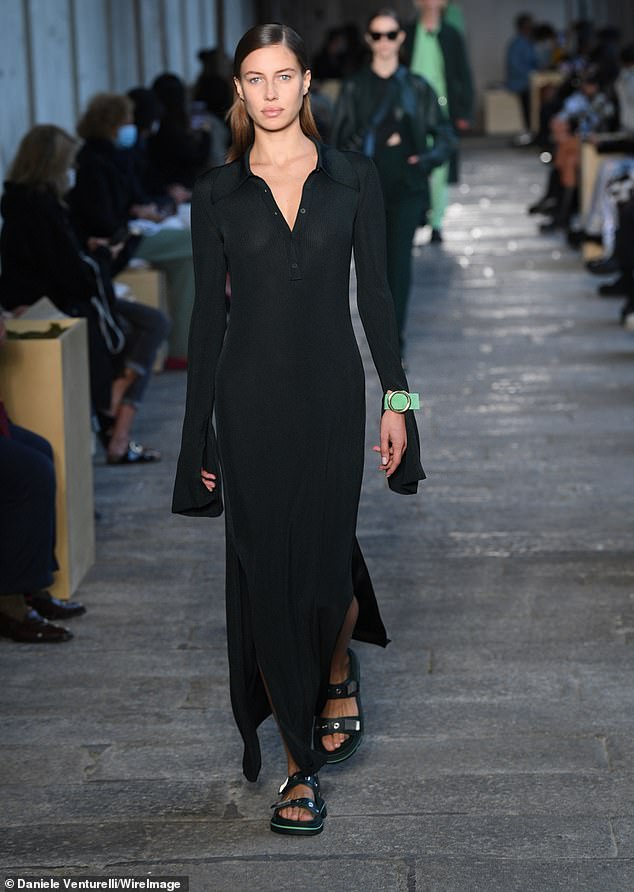 In formation: Nicole looked incredible as she flaunted her model walk during the show 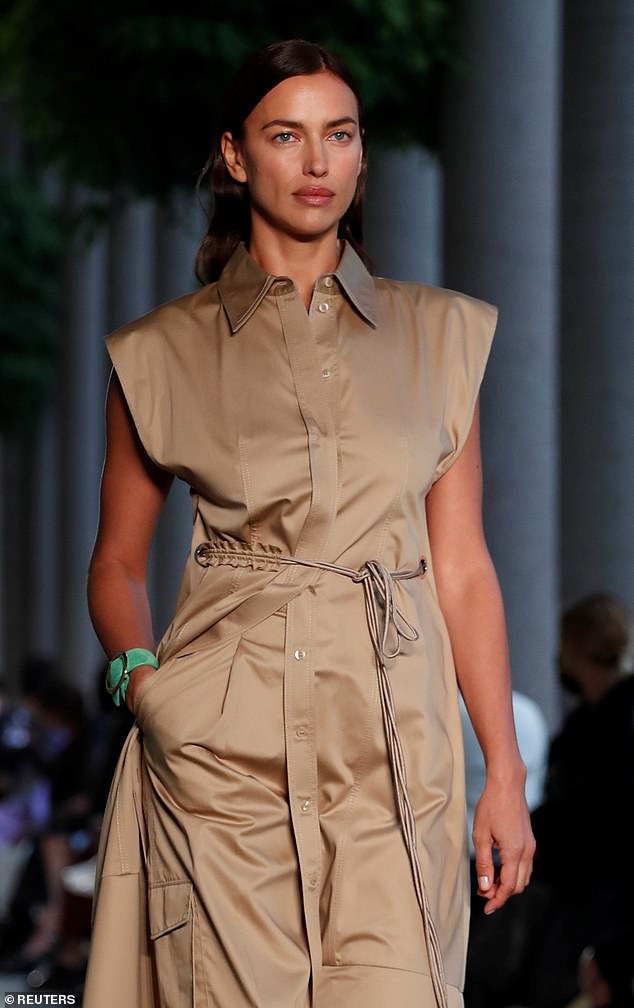 Chic: Irina Shayk wore her brunette locks in sleek loose lengths while her make-up was extremely minimal to best highlight her glowing complexion 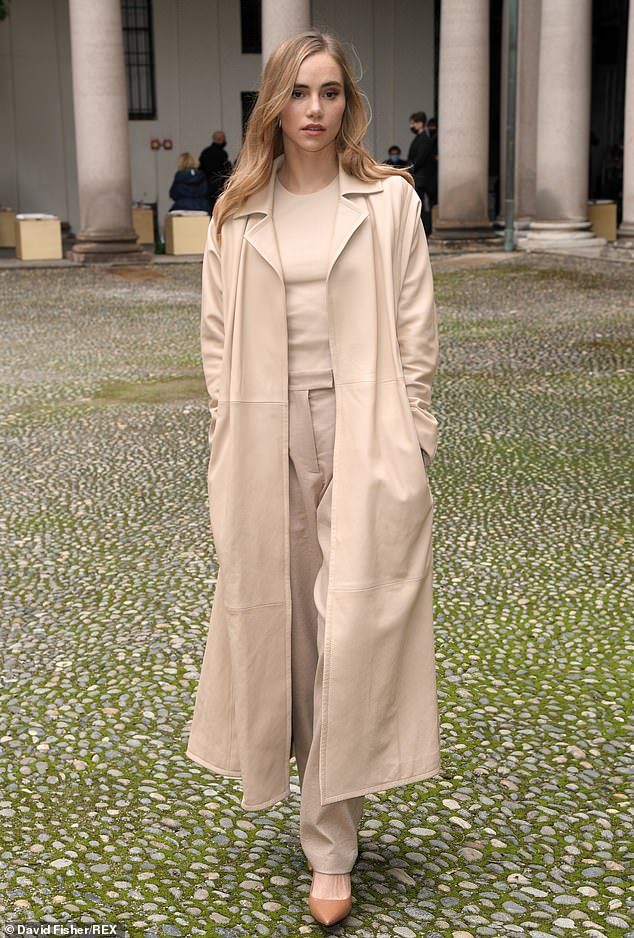 She’s got style: Suki Waterhouse turned heads as she led the arrivals for the Hugo Boss Milan Fashion Week show on Friday

Here come the girls: Irina strutted down the runway in a quirky khaki shirt dress, while another model showed off a silk floral number from the collection

Meanwhile, actor Brad, 56, is dating model Nicole and they were spotted last month arriving in the South of France on a private jet where they visited Château Miraval.

The trip coincided with what would have been his and Angelina’s sixth wedding anniversary, they married at the château on August 24, 2014.

The former couple had purchased the estate including the Château and vineyard in 2011 for $60 million after leasing it for three years. 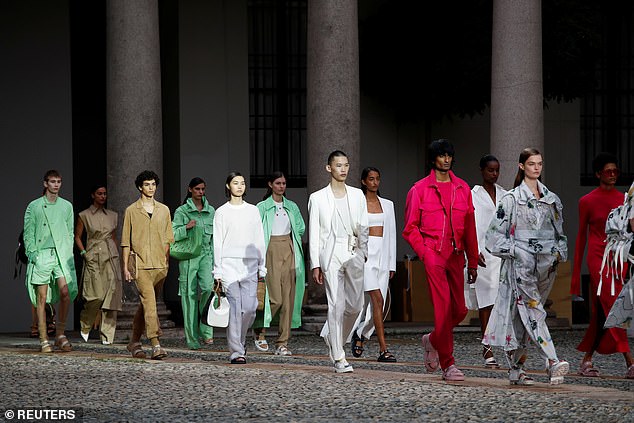 Back: Milan Fashion Week is being held as a breakthrough for Italy, seven months on from when the country dealt with the devastating effects of coronavirus

Snakes and leathers! The outfits seen at the show featured a host of textiles and patterns 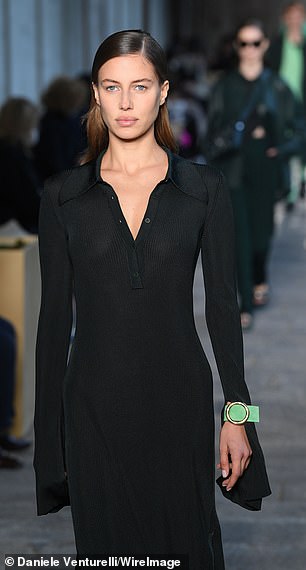 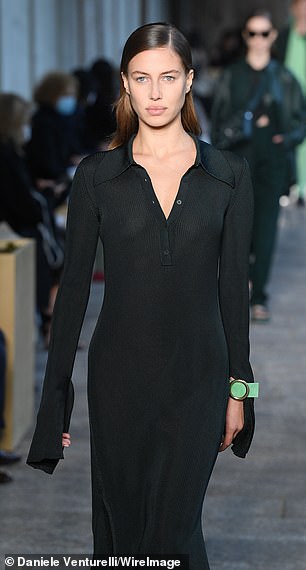 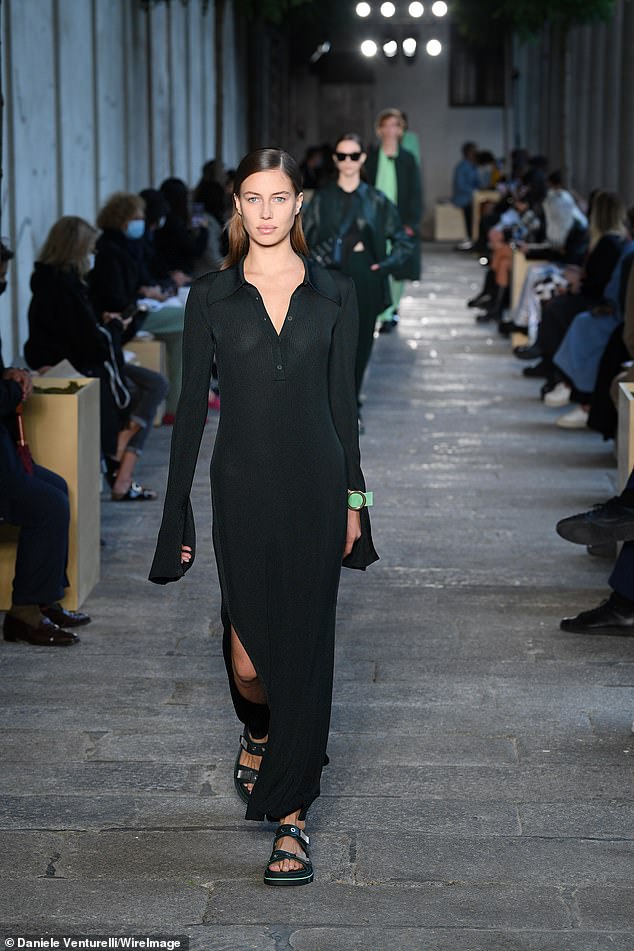 It is believed that Nicole and Brad may have been dating for the best part of a year, as they both attended a performance of Kanye West’s opera Nebuchadnezzar at the Hollywood Bowl in November 2019.

Nicole is allegedly in an open relationship with her husband Roland.

Earlier this month, Nicole hit back at trolls accusing her of of ‘hating’ Brad’s ex-wife Angelina Jolie and said people should ‘stay out’ of her relationship after she shared a cryptic quote saying ‘happy people don’t hate’.’

Brad and Nicole’s visit to Château Miraval reportedly angered Angelina, with a source telling the Mirror: ‘Angie is furious and utterly stunned Brad could stoop this low. 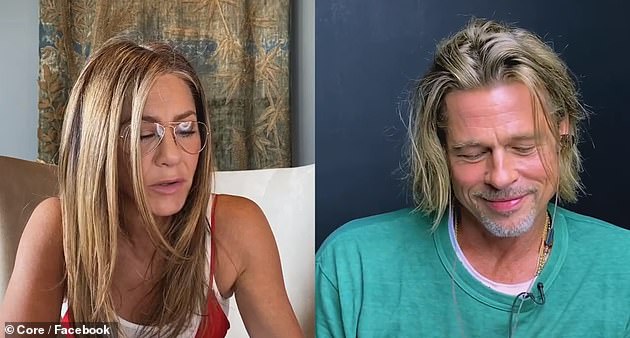 Back together! Nicole’s runway show comes after Brad’s fans went wild when he reunited with ex-wife Jennifer Aniston for a risqué table read of Fast Times at Ridgemont High

It was the first time the former spouses have been seen together since they were spotting chatting backstage at the Screen Actors Guild Awards in January.

The former couple recreated one of Fast Times At Ridgemont High’s  most risque scenes, where Jennifer’s character walks in on Brad’s character ‘daydreaming’ about her topless in the bathroom as she looks for Q-tips. 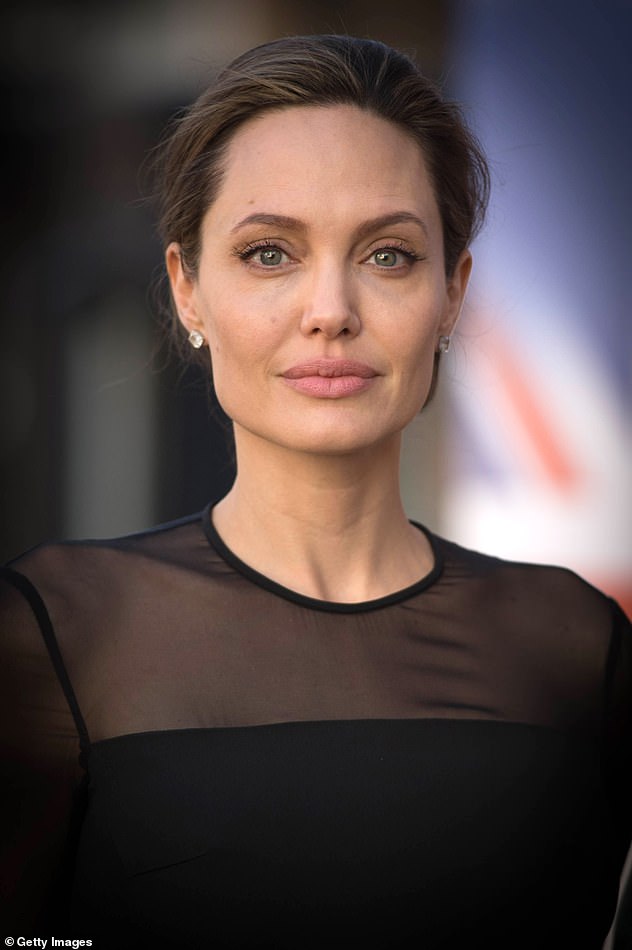 Hitting back: Earlier this month, Nicole hit back at trolls accusing her of of ‘hating’ Brad’s ex-wife Angelina Jolie and said people should ‘stay out’ of her relationship