Brian Austin Green and Tina Louise have split up.

The 47-year-old actor started dating the 39-year-old model last month following his split from wife Megan Fox but she ended things this week because she wanted to settle down and he wasn’t ready for a serious relationship, sources told TMZ.

Insiders also claimed that Tina had been getting abuse from fans of Megan, 34, and Brian and ‘the bullying was disheartening and really affected her and definitely played a part in the breakup.’ 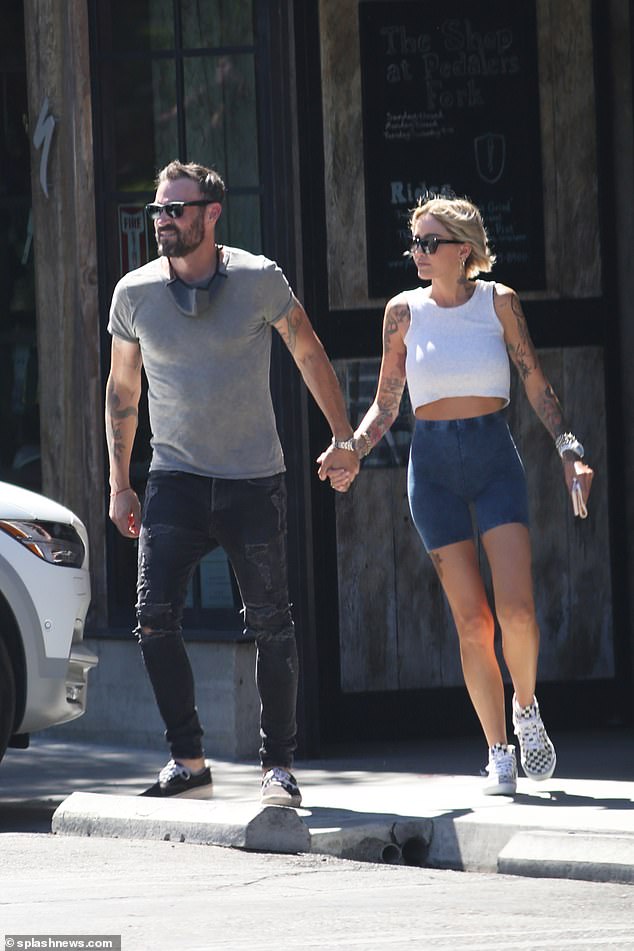 The way they were: Brian Austin Green and Tina Louise have split up; pictured July 13, 2020

Meanwhile, Brian previously admitted he was ‘disappointed’ in Courtney Stodden for sharing a bizarre video of them in a hot tub together, saying it ‘kinda sucked’ that she posted a video online after he started seeing Tina, as he said she knew it would ’cause problems,’ he told TMZ.

He said: ‘Courtney, super nice … but disappointing. I was just trying to be a nice guy, I shot a video for her friend Ashley, saying hello … That was a month-plus ago, that was back when the pictures of her and I came out.

‘I was disappointed [that she posted it] knowing that it would cause problems for Tina – and myself – having three kids, it kinda sucks. I think she’s a nice person, I just think she’s making some bad choices.’ 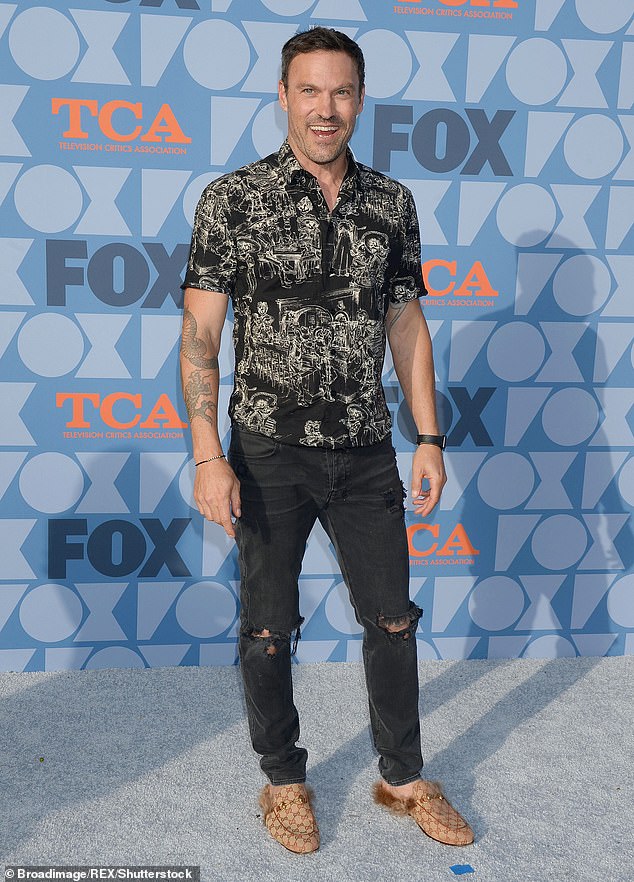 Star: The 47-year-old actor started dating the 39-year-old model last month following his split from wife Megan Fox but she ended things this week because she wanted to settle down and he wasn’t ready for a serious relationship, sources told TMZ; pictured August 7, 2019

Meanwhile, Brian and Megan – who is currently dating Machine Gun Kelly, 30 – have vowed to stay good friends for the sake of their three children.

He said of their split: ‘It sucks when life changes and something that you’re used to, that you’ve been doing for 15 years, you try and not get rid of but you change … I really don’t want Megan and I to be at odds … she’s been my best friend for 15 years and I don’t want to lose that.’

The ‘split’ comes while Megan is currently in Puerto Rico with Machine Gun Kelly.

The couple, who have been dating for about a month, did their first joint interview on the Give Them Lala.. With Randall podcast on Wednesday, where they spoke about their future together with astrologer Susan Miller. 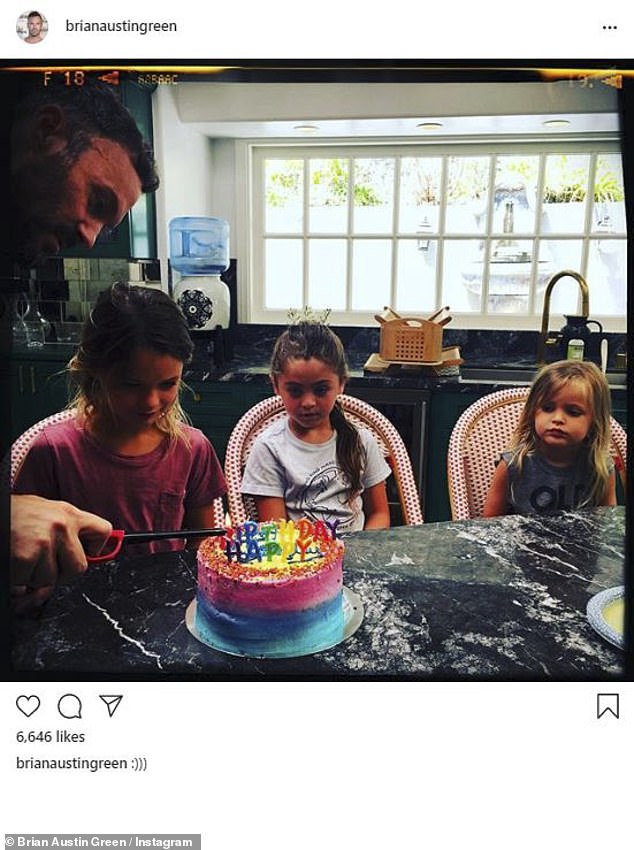 Susan responded saying, ‘or could be a scholar too. Sagittarius is also someone who digs deep and thinks,’ while Kelly quickly chimed in with: ‘I think she’s famous.’

Then, when Susan noted that his wife would be someone who is ‘happy’ Kelly added: ‘Yeah, like Megan. Megan is always really happy.’

The rapper the discussed whether or not he would have more kids (he shares a 12-year-old daughter Casie with ex-girlfriend Emma Cannon.)

Susan gave her prediction that he would have a baby girl if he decided to have more children in the future.

Megan – who has three boys with ex Brian Austin Green – remarked in the interview how she already sees the rapper as her soul mate.

‘I just felt it like, deep in my soul – that something was going to come from that. So then, we met on set,’ she said about meeting him while filming their upcoming movie Midnight in the Switchgrass. 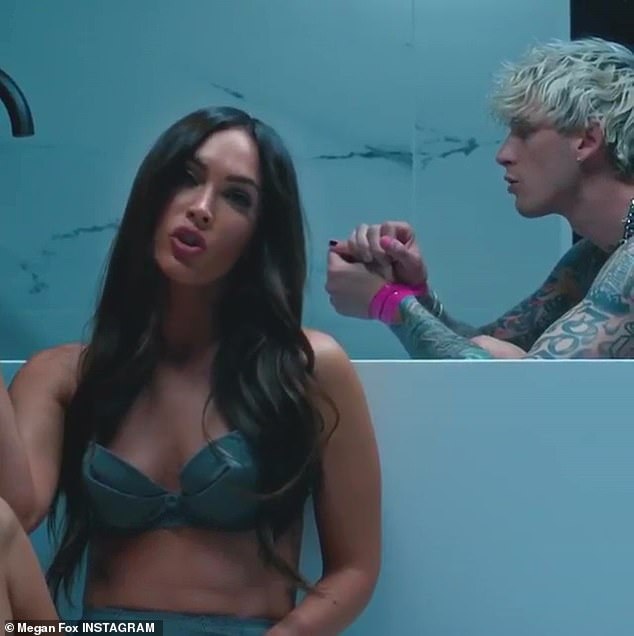 Vacation time: The ‘split’ comes while Megan is currently in Puerto Rico with Machine Gun Kelly; pictured in his music video Bloody Valentine

She added: ‘I knew right away that he was what I call a twin flame. Instead of a soul mate, a twin flame is actually where a soul has ascended into a high enough level that it can be split into two different bodies at the same time.’

‘So we’re actually two halves of the same soul, I think. And I said that to him almost immediately, because I felt it right away.’

Megan then revealed that it only took her to the second day of filming before she asked the rapper to come into her trailer for lunch, admitting: ‘I put him through all of this astrology stuff… I went deep right away. I knew before I even did his chart, I said to him, he has a Pisces moon. I could tell by his energy.’

Megan’s ex Brian said earlier this year that cheating ‘did not play a part’ in their marriage breakdown. In May, Brian said on his podcast: ‘She met this guy, Colson, on set… I’ve never met him,’ adding: ‘Megan and I have talked about him. They’re just friends at this point.’

Meanwhile, Machine Gun Kelly admitted that he would be ‘waiting outside on my trailer steps, every day… to catch one glimpse of eye contact. She would have to get out of her car. There were like, five steps between the car and the trailer. And I would just sit there and hope.’