MIRIAM AND ALAN: LOST IN SCOTLAND AND BEYOND

After their ultra-cute and saccharine K-Pop music and the uber-violent thriller Squid Game, South Korea’s next global export might be a cure for obesity called mukbang.

Mukbang is not a diet. It’s a blowout, a gut-busting binge, an overload of carbs so excessive that it looks physically dangerous. 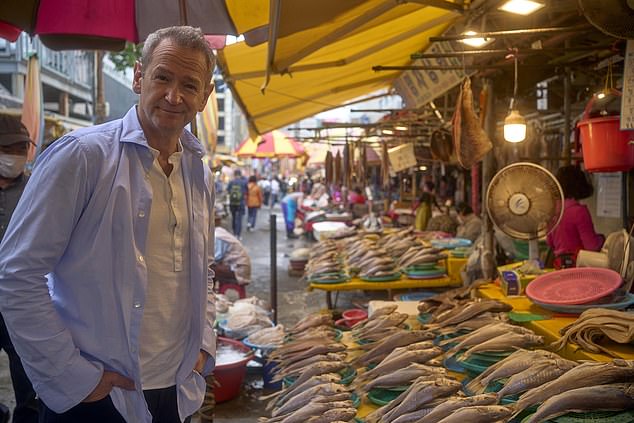 To demonstrate, a tiny woman named Heebab, on Alexander Armstrong In South Korea (C5), boiled up 20 bags of processed noodles and wolfed them down in under three minutes.

To burn off the calories, she says she works out on a treadmill in her apartment. She has good genes too, she adds.

How Heebab can remain the size of a doll is anyone’s guess. But her diet has worked wonders for me — I never want to eat a noodle again.

Alexander, or Xander to his Pointless friends on BBC1’s teatime quiz game, looked positively green as he tried to match her. 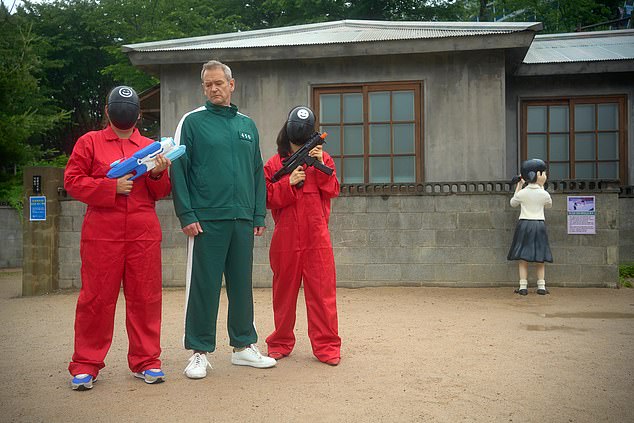 Tearjerker of the night

Alex Jones admitted, on Between The Covers (BBC2), that she loves having a cry over a sad book when she flies. ‘It’s just alcohol and altitude,’ scoffed fellow guest Graham Norton. Either that, or the half-term holiday trauma of six-hour queues for baggage check-in.

But that might have been due to the make-up session in a Seoul male beauty parlour, where his face was spray-painted green, which Koreans believe looks better than the European pinky-red.

With his eyebrows coloured, too, he looked like an over-restored corpse in a funeral parlour. That proved apt as this amiable and lively travelogue took him to a graveyard where a guru invited him to pretend that his life was over.

Poor old Xander, usually such an upbeat chap, became quite choked, pulling on a shroud and lying down in a coffin. He took it all seriously, as his guide asked him who would be crying to learn of his demise.

‘I hadn’t imagined how powerful this perspective was going to be,’ he gulped. A tear ran down his face: ‘I think my children are my best achievement. The thing I think of is love.’

And then the coffin lid was symbolically hammered down. It seemed especially harsh that, for a fellow who makes no secret of his fondness for a Cordon Bleu dinner with vintage wine, his last meal should be half a hundredweight of lukewarm noodles.

Perhaps 57-year-old Alan has lost his appetite, thanks to his octogenarian companion’s constant foul language and wind.

A small dose of Miriam goes a long way, though she was the one who appeared to be getting increasingly fed up as their travels took them to Luss, on the banks of Loch Lomond. 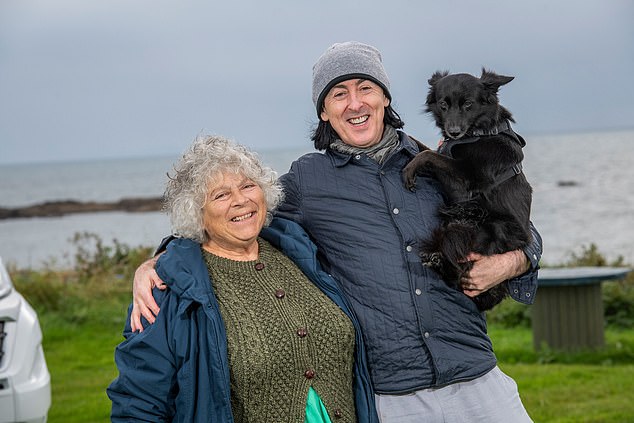 That might be because it was Alan who was getting all the attention, from the moment he pulled off his woolly hat to reveal shoulder-length locks dyed black. He looked like a bad Neil Oliver tribute act. ‘Hideous, darling,’ said Miriam.

Undeterred, Alan started reminiscing about his early career, as a murderous lothario in the Scottish soap Take The High Road.

Then he flaunted his credentials as an ordained minister in the Universal Life Church, performing a marriage blessing for his cousin Martin, who was affirming his vows to husband William.

No, I’d never heard of the Universal Life Church either, but apparently it hands out certificates to celebs who want to play vicar. Benedict Cumberbatch and Adele are fellow clerics.

Sometimes it seems the entire planet has gone stark staring mad, but maybe it’s just me.