CHRISTOPHER STEVENS reviews last night’s TV: Why is the BBC still hiding behind a wall of silence over evil Jimmy Savile?

Savile: Portrait Of A Predator

Even now, the silence is oppressive. A brief investigation into Jimmy Savile’s 50-year career found plenty of appalling footage that showed the BBC DJ committing blatant sexual offences on camera.

But there was no one from the Corporation, past or present, to begin to explain, on Savile: Portrait Of A Predator (ITV), how he was allowed to get away with it. No producers, no presenters, no Radio 1 jocks, no studio crews, no execs.

The wall of silence was broken only by a bland statement about new safeguards to ensure the crimes could never be repeated. Since Savile died in 2011 aged 84, I think we can take that for granted. 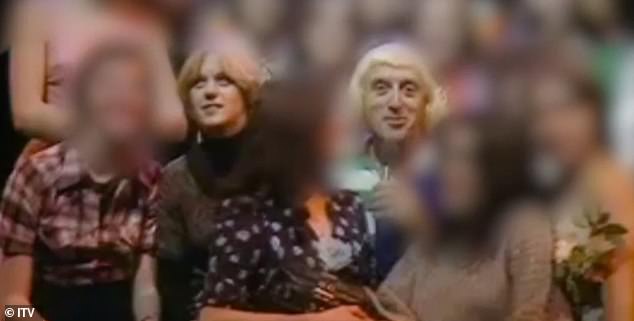 There was no one from the Corporation, past or present, to begin to explain, on Savile: Portrait Of A Predator (ITV), how he was allowed to get away with it. No producers, no presenters, no Radio 1 jocks, no studio crews, no execs

The closest to a BBC witness was a former radio researcher who met the swaggering pervert once and was horrified to hear him brag of sex with 14-year-olds in a campervan, parked in a TV Centre bay.

‘Everybody knew about it but nobody knew what to do about it,’ said Richard Pearson, who added that he felt unable to report Savile’s boasts without evidence.

This documentary to mark the tenth anniversary of Savile’s death was short, shallow and skirted many of the worst facts.

It’s telling that it screened on an independent channel, not the BBC which failed to conduct any investigation into his systematic sex abuse while he was alive.

Many of the allegations deserved much more thorough treatment. One woman, Kelly Gold, said that, aged 15, she was plied with champagne at the BBC bar by employees before recordings of Top Of The Pops.

Photos showed her on the set, standing near to Savile, who summoned her to his dressing room at the studio later. There was a ‘day bed’ there, and other underage girls drinking alcohol.

Kelly fled when Savile tried to grope her. Her friend, Claire McAlpine, also 15, became a favourite of the DJ. She later killed herself.

It’s hard to escape the conclusion that a lot of people at the BBC, past and present, were keeping their heads down as they have for many years. They aren’t the only ones. This report said nothing of Savile’s many friends in the police.

His hundreds of victims are owed an in-depth account of how he was enabled to rape and molest with impunity. At the very least, these crimes deserve the sort of five-hour documentary series the BBC does so well, such as the one currently devoted to the relationship between Tony Blair and Gordon Brown.

Instead, the Beeb has commissioned a drama starring Steve Coogan as Savile — turning the bleakest episode in its history into entertainment.

That show, called The Reckoning, is filming now. Treating the story as fiction appears to be one more way for the BBC to avoid confronting the most difficult issues . . . such as asking: Who financed Savile’s crimes?

The answer to that is: Us. The licence payers. Our annual fees paid Jimmy Savile’s salary and supplied the budget for his shows. The silence has to end. We are all owed that much. The Beeb can manage multi-part documentaries when it wants to.

Ambulance (BBC1), now in its eighth season, is proof of that.

This simple format never palls: we ride with a couple of paramedic crews to a variety of call-outs, ranging from the touching to the tragic, and eavesdrop on the banter back in the control room. Moments of accidental comedy shine through.

One lady who passed out in her car was joined in the ambulance by her son. She sent him away with instructions to: ‘Go and let the hens out.’

It’s absorbing and, more than that, it’s uncontroversial. How the BBC bosses must love it.