She has been showing off her newly slimmed down frame in recent months, after shedding a few dress sizes via controversial Skinny Jabs.

And Gemma Collins gave a glimpse of her more slender frame once again on Friday night, when she stepped out in an eye-catching ensemble in London.

The Diva Forever star, 39, turned heads in a markedly bright and colourful pyjama-style trouser suit, as she treated her nephew to a lavish meal at the Dorchester. 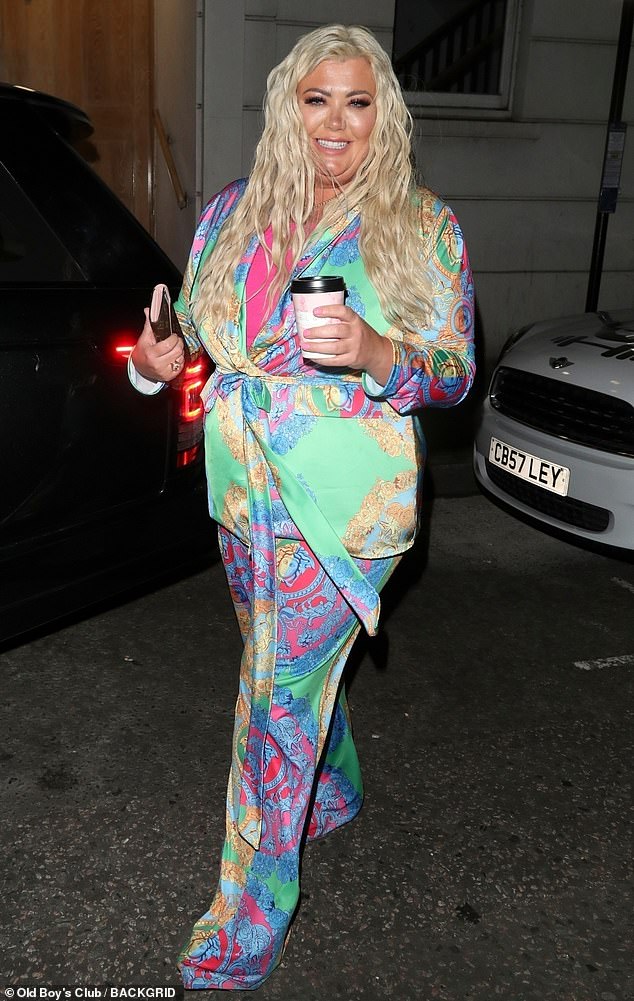 Catching the eye: Gemma Collins stepped out in eye-catching style, when she enjoyed a lavish meal at London’s Dorchester, before picking up dessert at EL&N London on Friday evening

Her satin two piece, which was dominated by shades of green and blue, was teamed with a bubblegum pink plain top – further adding to her bold and bright look.

The TV personality wore her golden locks in long waves, while a generous serving of makeup ensured she turned heads as she enjoyed her evening out.

Following their meal, TOWIE star Gemma was seen taking her nephew to EL&N London to grab some desserts as a sweet treat. 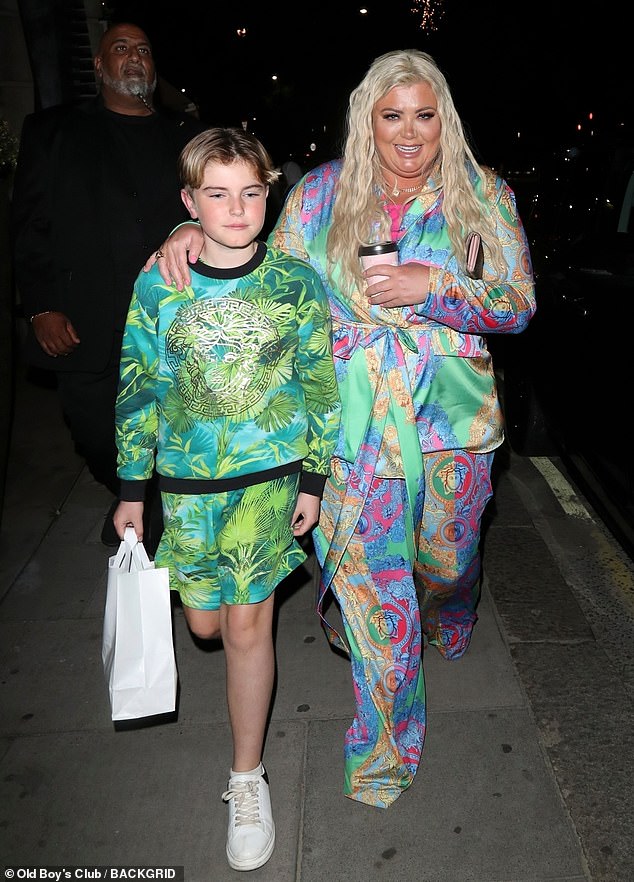 Family: The reality star was joined by her nephew for her night of fine dining and sweet treats

Gemma has been able to showcase her weight loss in a range of social media snaps as she promotes her bespoke clothing range.

On Friday, she took to Instagram to upload a snap of herself in grey loungewear as she posed on a plush sofa with a rose in her mouth.

Gemma took the opportunity to promote her new range, as she wrote in the caption: ‘I AM …. MY OWN WORK of ART.

‘[T]he countdown begins my beautiful luxury lounge wear designed by moi will be available from next week.’ 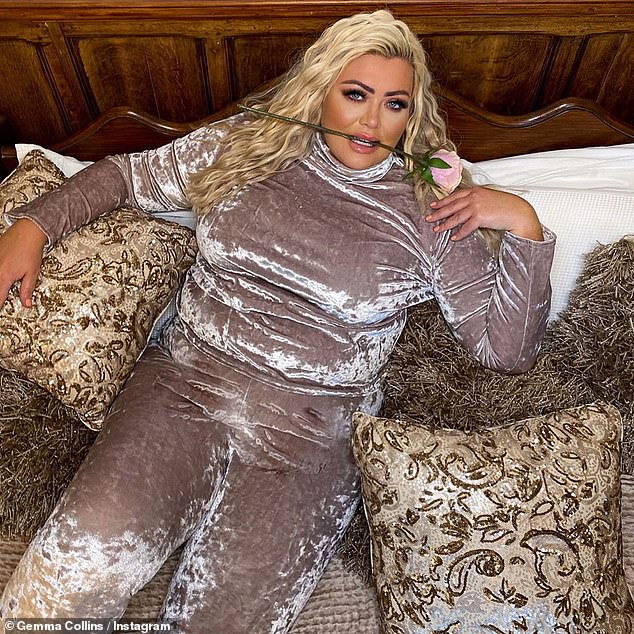 Wow! On Friday, the TV personality donned grey loungewear as she promoted her new clothing range via Instagram

Talking to PlayOJO bingo on Wednesday, Gemma opened up about her weight loss journey, as she revealed: ‘I use Skinny Jabs – it’s a programme that I am on and I have managed to lost 3 stone on it.

‘It is a full programme, you get nutrition advice, nice recipes and guidance and I’d recommend it to anyone looking to lose weight.’

The television personality has previously come under fire for promoting the jab, which ‘regulate the glucose level in your blood, allowing your body to use your stored fat for energy’.

This means that you can safely consume small portions without experiencing the undesired effects of starvation mode. 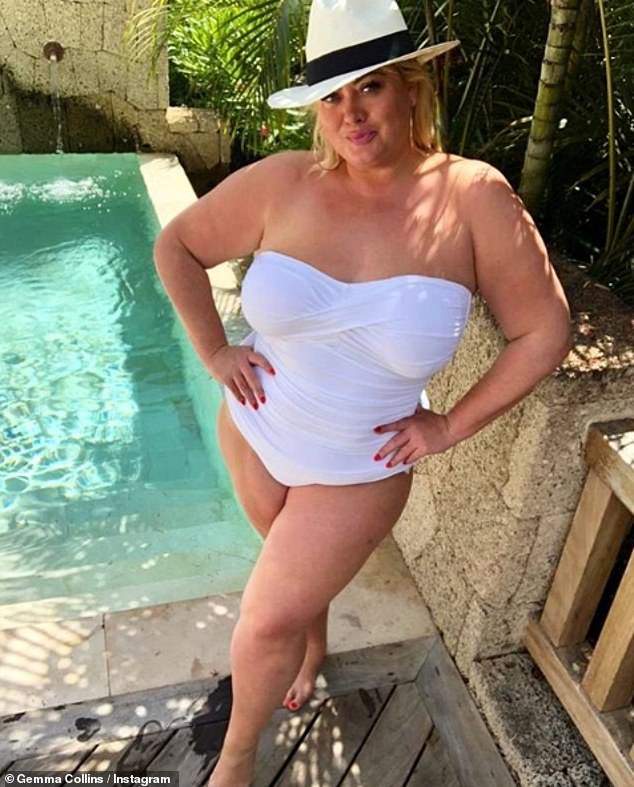 Weight loss journey: Gemma has shed three stone so far this year thanks to controversial Skinny Jabs, and said she would ‘recommend’ it to others (pictured in July 2019)

Gemma continued: ‘My advice to anyone looking to start a weight loss journey would be adopt the right mindset.

‘I believe that all bodies are beautiful, but if you want to make a change its really powerful to do it from a health-first perspective.’

Earlier this month, Gemma furiously hit back at brands who refused to dress her as she was ‘too fat’.

Talking about TOWIE’s 10th anniversary, she said: ‘I was never the prettiest girl on the show. I never had the best body. 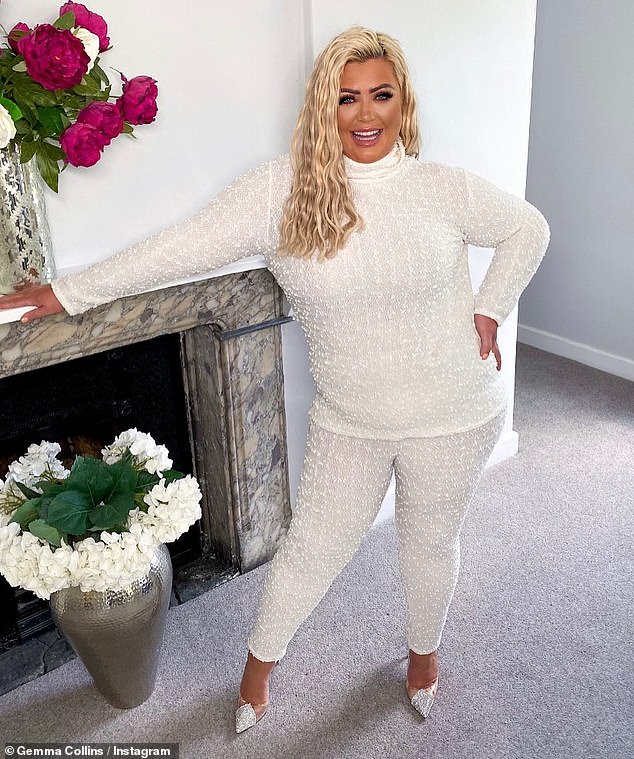 Trim: ‘I believe that all bodies are beautiful, but if you want to make a change its really powerful to do it from a health-first perspective’, Gemma said (pictured on Monday)

‘Obviously I was confident when I went on the show, but a lot of clothing brands wouldn’t lend me their clothing because they said I was too fat.

‘So to everyone who wouldn’t lend me clothing or put me in their brands, what you got to say now, huns?’

Gemma then brazenly stuck up two fingers to the camera with both hands before saying it had been ‘amazing’ looking back at the reality show that made her a household name. 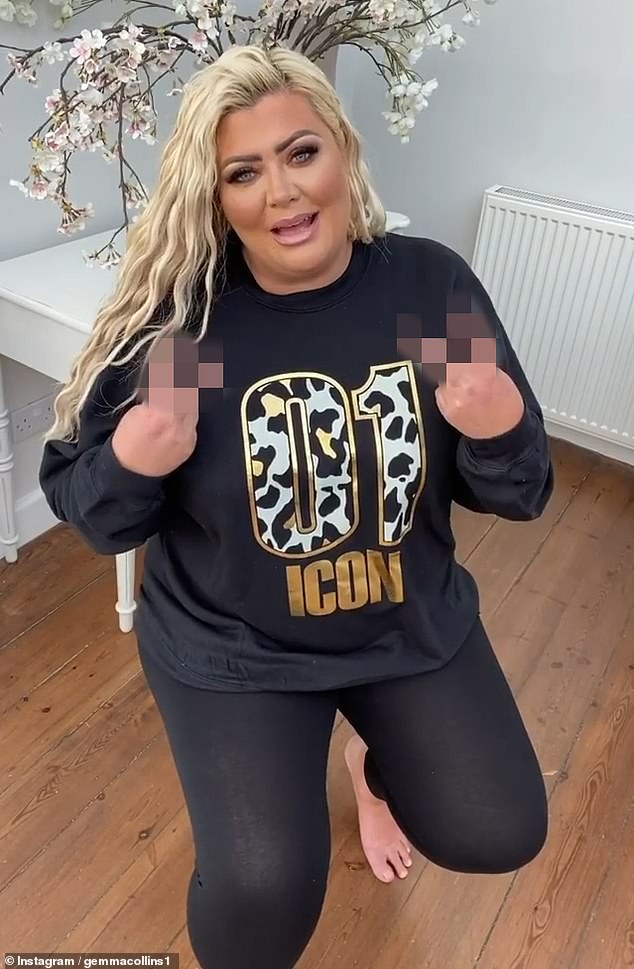 Defiant: Earlier this month, Gemma furiously hit back at brands who refused to dress her as she was ‘too fat’

Kim Kardashian Enjoys Family Time Ahead of Her 40th Birthday

Bruce Springsteen Shares Trailer For ‘Letter To You’ Documentary