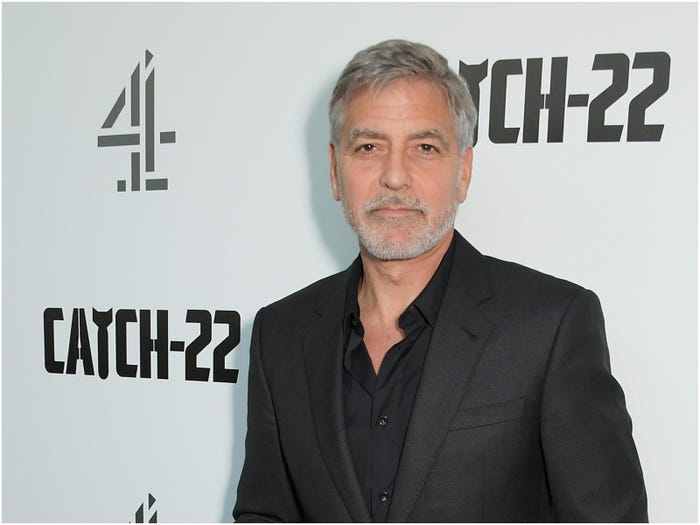 George Clooney said that people started filming him on the ground after he suffered a near-fatal motorcycle crash, which he thought might be his last moments on Earth.

In a new interview with GQ, the Oscar-winning actor recalled the 2018 motorcycle crash in Sardinia Italy, where a car turned in front of him while he was going 75 mph.

"I launched. I go head over heels. But I landed on my hands and knees. If you did it 100 times, maybe once you land on your hands and knees, and any other version you land, you're toast. It knocked me out of my shoes," Clooney said.

"When I hit the ground … my mouth — I thought all my teeth were broken out. But it was glass from the windshield [of the car he hit]."

The crash took place on the Italian island while Clooney was shooting "Catch-22," the miniseries that he produced, directed, and starred in based on Joseph Heller's book of the same name.

Clooney said that he expected to come out of the crash with, at the very least, paralysis, and was lying on the ground "waiting for the switch to turn off." Miraculously, he survived with no serious or life-threatening injuries.

However, Clooney said he would never forget the reactions of passers-by who stopped to film him after the crash.

"I was on the ground. I was really screaming. Like, really screaming. And Grant [Heslov] came back, and he was screaming at everybody to get an ambulance, and I remember everybody got out of their cars, they stopped in the middle of the street, and all these people came and stood over me and just pulled out their phones and started taking video."

Clooney continued: "It's a funny thing. I'm not a cynical guy, and I really tend to look at life and try to find the good in everything. But I'll never forget the moment that what I thought might be my last few moments was for everyone else a piece of entertainment."

While these spectators oggled Clooney and his crash, the actor described that his overiding thought while laying there post-crash was the thought of his children, who he thought he might not get to see again.

"My kids were like a year old, and mostly it was just the thought that this was it and that I wasn't gonna see them again."

Since that crash, Clooney's wife Amal Clooney has banned him from ever riding a motorcycle again, which he says he fully accepts.