Is Katie Price planning another engagement to Carl Woods

Is Katie Price, 42, planning another engagement? Thrice-married star packs on the PDA with Carl Woods, 32, as she says ‘watch this space’ after dating for less than a month

She’s been dating car salesman and former Love Island star Carl Woods for less than a month, but is Katie Price planning another engagement?

The new couple packed on the PDA as they were seen strolling along Lakeside shopping centre’s car park hand-in-hand in Essex on Friday afternoon.

The thrice-married mother-of-five, 42, later shared an Instagram snap of herself with Carl, 32, on Monday, alongside the caption: ‘You have made me feel like the luckiest girl in the world @carljwoods …. everyone watch this space ❤️❤️.’ 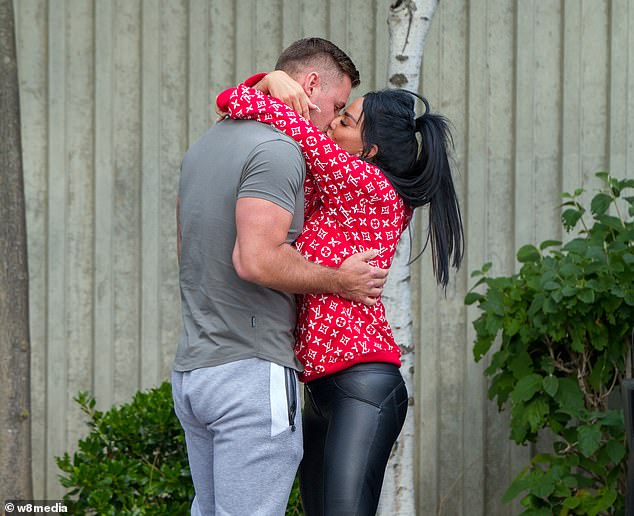 Is Katie Price, 42, planning another engagement? Thrice-married star said ‘watch this space’ and claimed Carl Woods, 32, is ‘a keeper who ticks every box’ after dating for less than a month

During their outing, the duo couldn’t keep their hands off each other as they kissed and hugged after parking the hunk’s £100,000 Hummer at the complex.

The former glamour model cut a typically chic figure as she teamed a £10,000 red jumper by Louis Vuitton x Supreme with leather leggings.

Nailing sporty chic, the CBB star complemented her stylish appearance with a pair of white trainers.

The brunette wore her tresses in a high ponytail, while her complexion was enhanced with matte foundation. 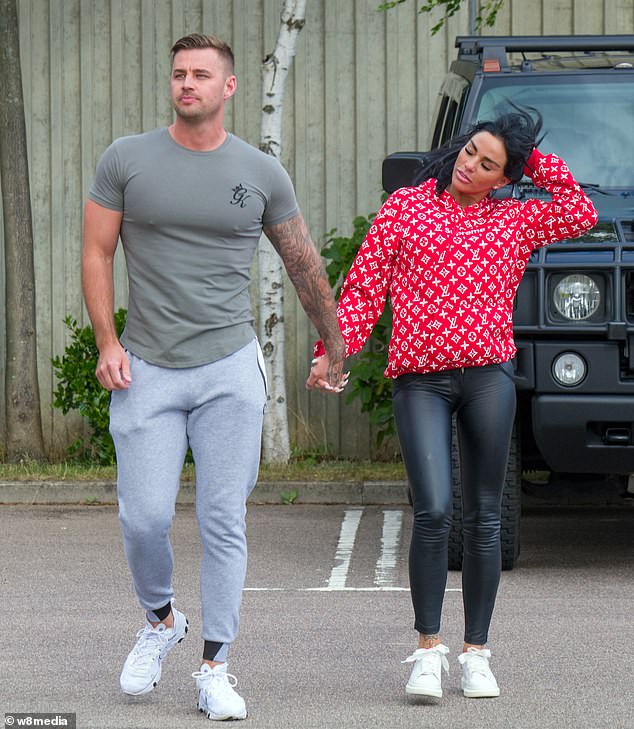 Smitten: The new couple packed on the PDA as they were seen strolling along Lakeside shopping centre’s car park hand-in-hand in Essex on Friday afternoon 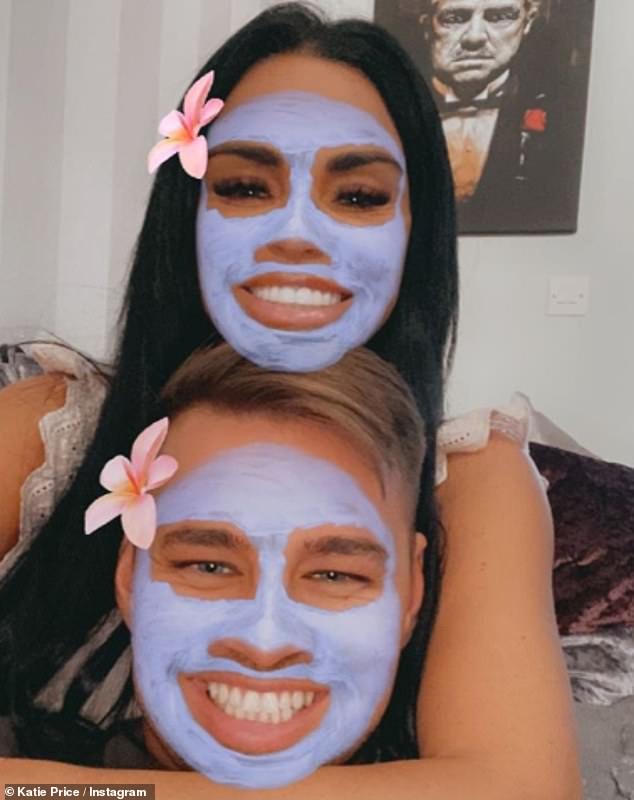 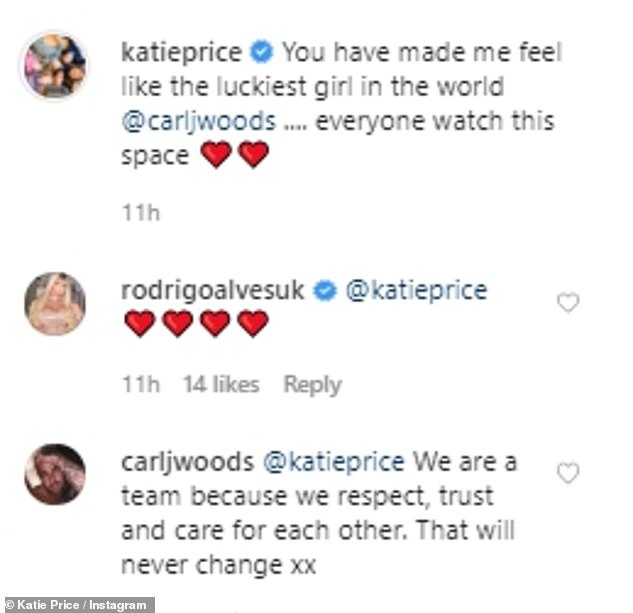 Sweet: On Monday, Katie, who famously married Kieran Hayler after two months, urged her Instagram fans to ‘watch this space’ when it comes to her romance

Carl, meanwhile, showed off his bulky physique in a grey, form-fitting T-shirt and matching joggers.

Katie later showered her man with love on social media, just days after saying she had ‘finally found her prince.’

As the media personality posted an image of the pair with blue-mask filters, reality star Carl wrote in the comments: ‘We are a team because we respect, trust and care for each other. That will never change xx.’

There’s no stopping them: During their outing, the couple couldn’t keep their hands off each other as they kissed and hugged 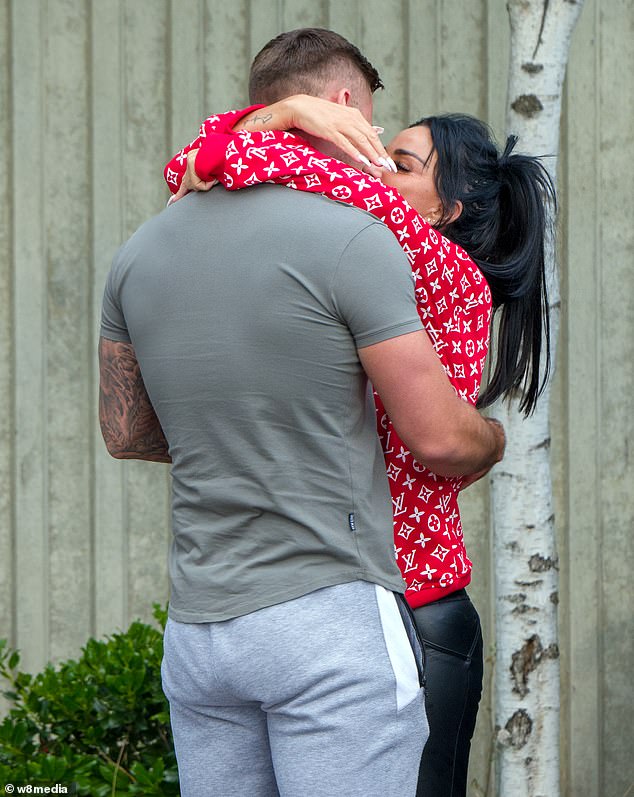 Kiss like no one’s watching: They shared smooches throughout their shopping date 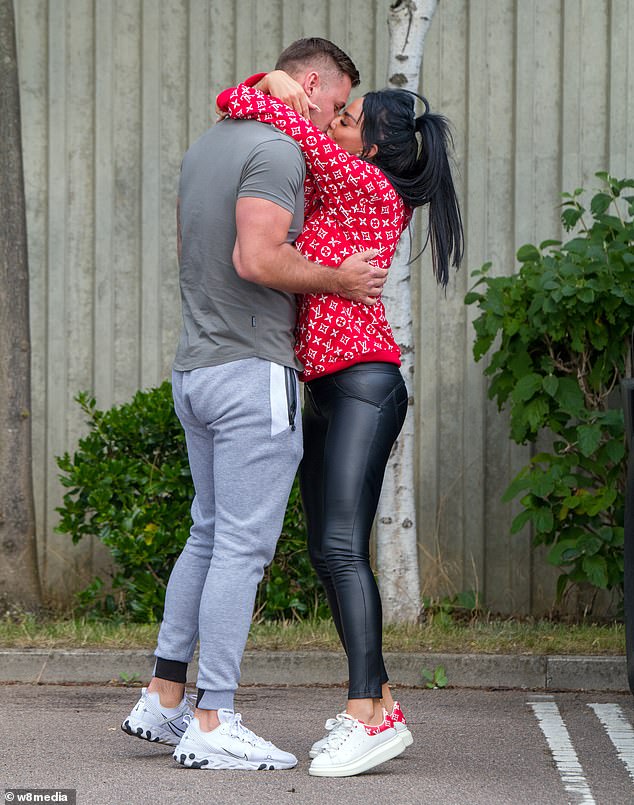 Her happy place: Carl appears to be a new highlight in Katie’s life following a challenging year 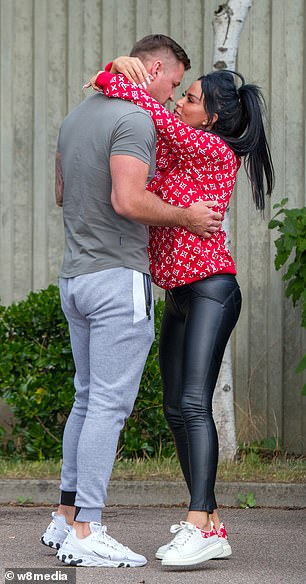 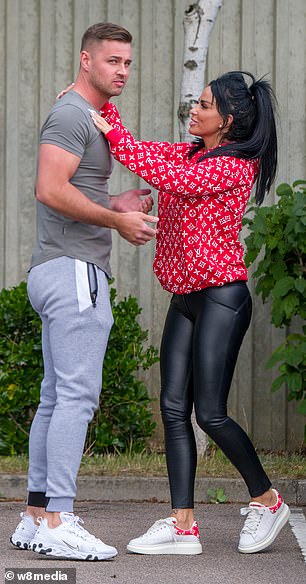 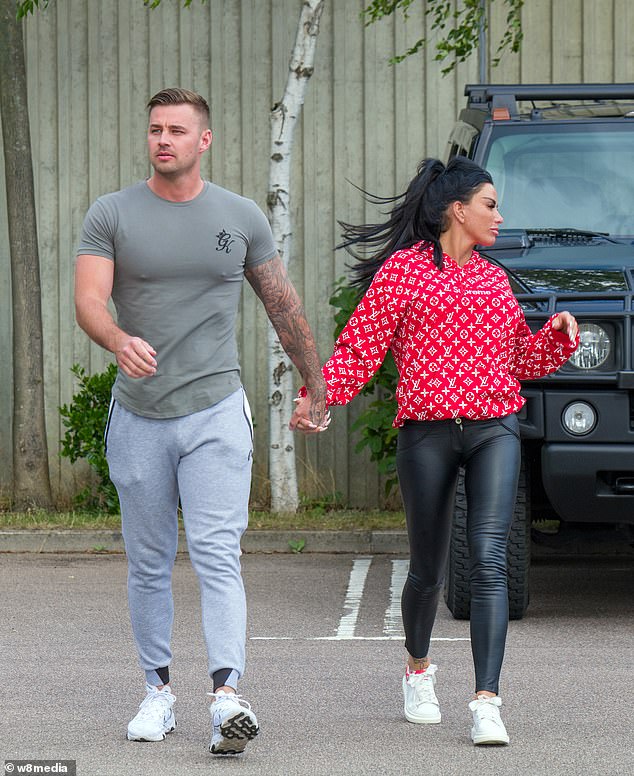 Making a statement: They put on a cosy display as their relationship continues to go from strength to strength

The former Loose Women panellist said: ‘He makes me feel alive, safe and happy. He’s like a dream come true and ticks every box.’

Katie, who split from personal trainer and former fiancé, Kris Boyson, 31, earlier this year, has said her mother Amy finally approves of this romance following a tumultuous time. 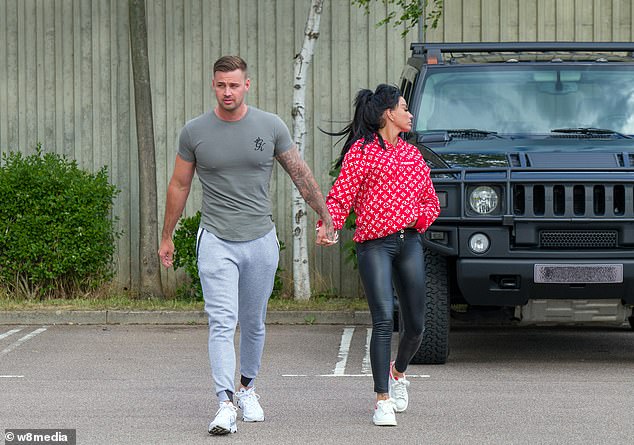 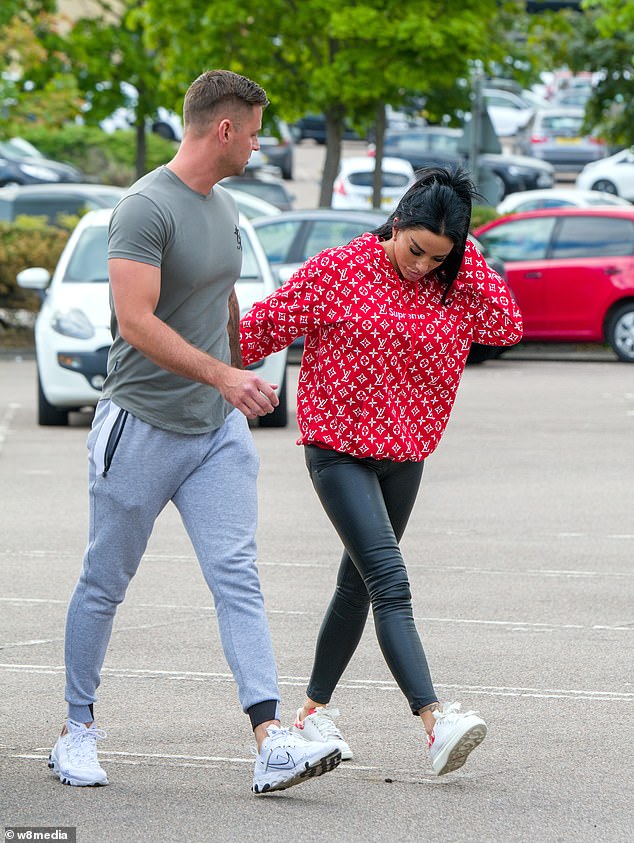 Radiant: The brunette wore her tresses in a high ponytail, while her complexion was enhanced with matte foundation 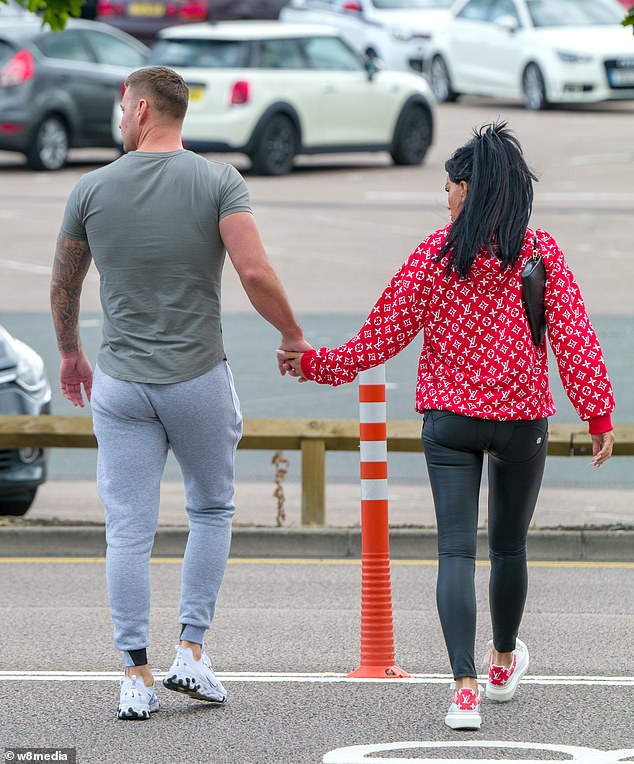 Watch out: They looked out for oncoming cars as they crossed the road 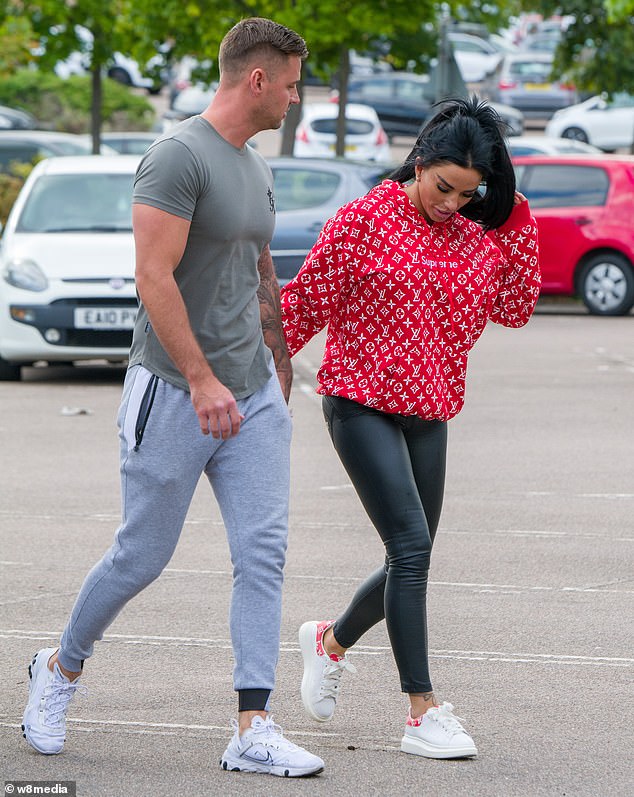 Stylish: Carl, meanwhile, showed off his bulky physique in a grey, form-fitting T-shirt and matching joggers 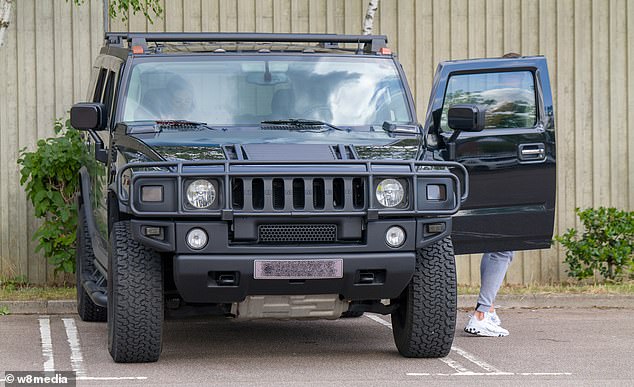 She added: I honestly feel like I’m punching with him. My mum and close friends are really happy for me. I’m telling you, he has all the right attributes to be a keeper.’

Katie said that mutual friends set them up and that she has known Carl for two years and he has ‘admired her from afar.’

And she claims Carl does not want to be in the public eye, despite his appearances on current ITV2 reality show, Killer Camp and Love Island in 2016. 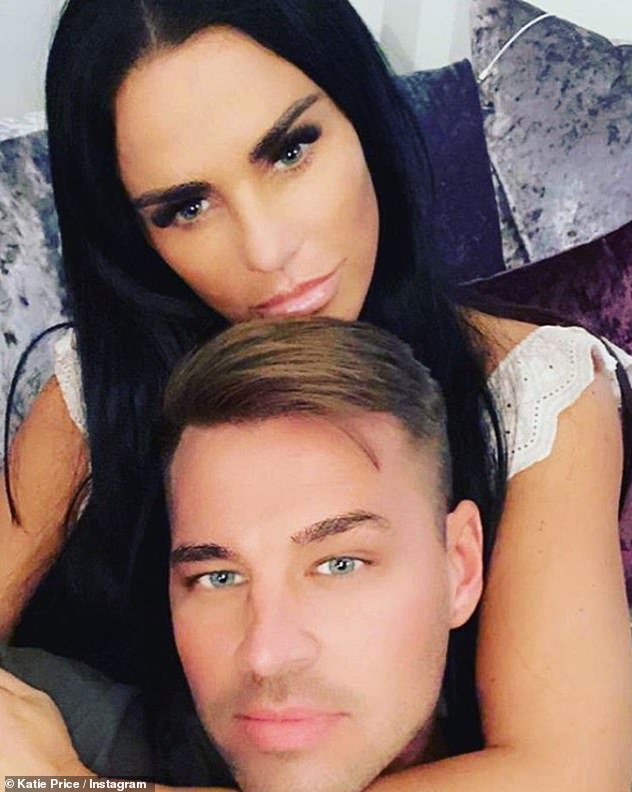 Loved-up: The TV star heaped praise on latest boyfriend Carl as the couple made their blossoming relationship Instagram official on Sunday evening 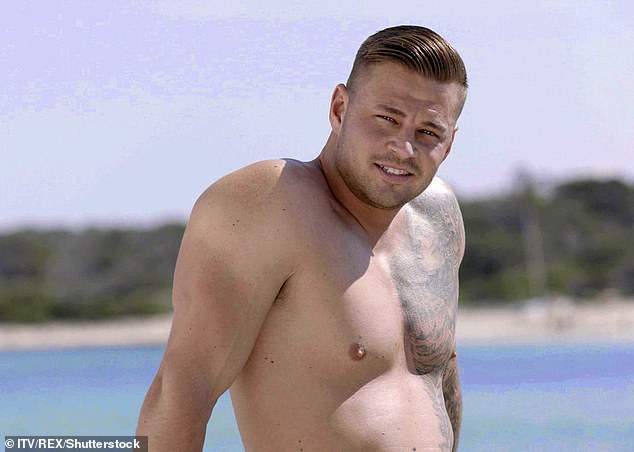 Wannabe? Carl appeared on ITV reality show Love Island in 2016 where he described himself as ‘confident, charming and outrageous’ but his time at the villa was short-lived

It’s been a tough time for the star who checked into the Priory in January this year for four weeks after admitting to taking cocaine to ‘numb the pain’ following a series of personal woes.

A source close to Katie said: ‘Katie is the happiest I’ve seen her in a long time. She feels really good in herself, secure and she’s smiling again.’

Katie married Kieran Hayler in January 2013 after a two-month romance but he was unfaithful with two of her best friends and allegedly had a fling with the nanny. 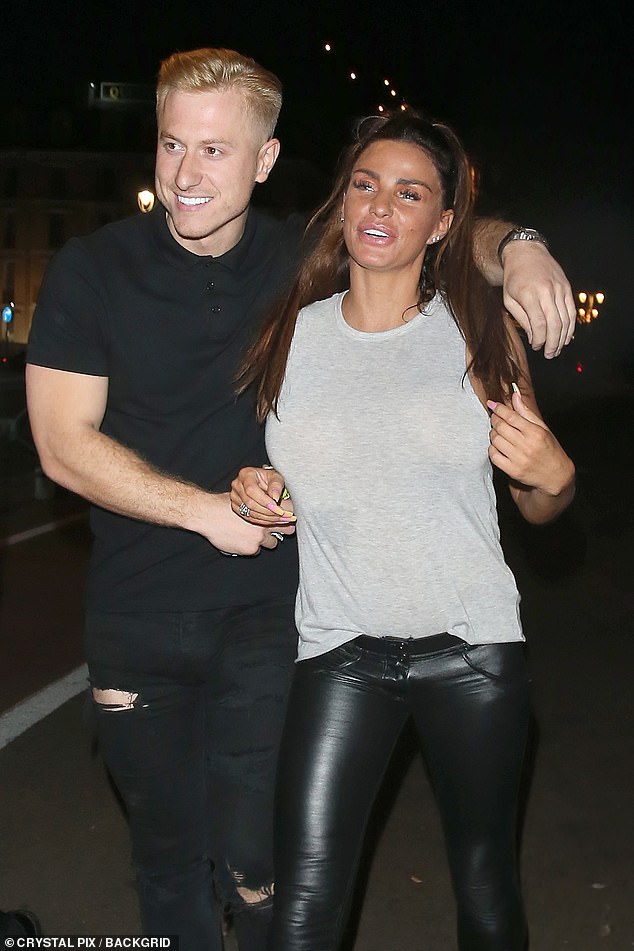 They then renewed their vows once more in October 2016 in Barbados after going through a series of ups and downs before filing for divorce in 2018.

Before her marriage to Kieran, Katie was wed to Alex Reid between 2010 and 2012 following an eight month romance and Peter Andre from 2005 to 2009. 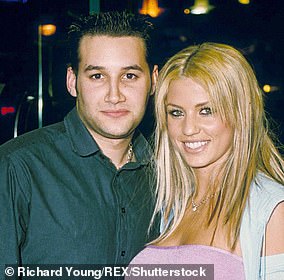 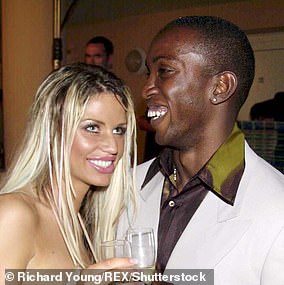 1996-98: Katie, then a surgery-free 18-year-old glamour model hooks up with Gladiators star Warren Furman. They get engaged but split in 1998.

1998-2000: Katie moves onto Another Level singer Dane Bowers. The pair date for two years but endure an acrimonious break-up. Katie admitted having an abortion during their relationship and called him ‘the love of my life’

2000-2001: After Dane, Katie starts seeing footballer Dwight Yorke after meeting him in a London club.

During their romance Katie falls pregnant with son Harvey, although Dwight initially refuses to acknowledge the baby is his.

2001: While pregnant with Harvey Katie beds Pop Idol finalist Gareth Gates, then 17, taking his virginity. She said afterwards ‘I just wanted to be loved’

2002: After Harvey’s birth in May 2002, she hooks up with Matt Peacock who went on to be briefly wed to Jodie Marsh 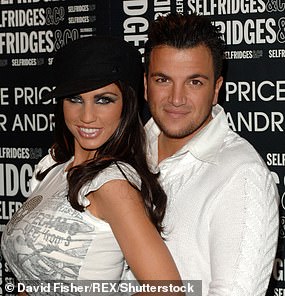 First husband: Katie and Peter Andre were the picture of true love

2003-2004: Katie gets into a relationship with Scott Sullivan, who coincidentally shares the same birthday as her. He proposes with a diamond ring on a teddy bear’s paw and she accepts but she is about to enter the I’m A Celebrity jungle

2004-2009: Katie falls madly in love with Peter Andre and the pair get married in 2006. The pair will welcome two children Junior, 12 and Princess Tiaamii before they split in 2009 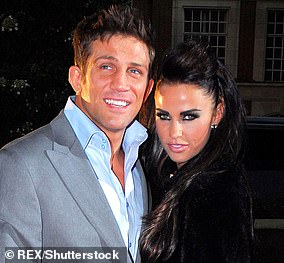 2009-2011: Admitting she was on the ‘rebound’ Katie starts dating cage fighter Alex Reid a mere eight weeks after her split from Pete. Following a whirlwind romance the pair wed in Las Vegas in January 2010 but the marriage falls apart less than a year later

2011-2012; Katie falls for Argentinian model Leandro Penna after meeting him at Elton John’s Oscars party in LA. Revealing she bedded him on the first night, the pair went on to get engaged before they split in 2012 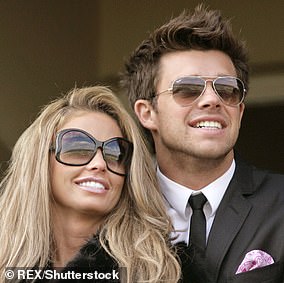 Fast and furious: Katie and model Leandro Penna were briefly engaged in 2012

2014: Katie takes to Twitter to announce the couple are divorcing after she found out about Kieran’s affairs with her friends Jane Poutney and Chrissy Thomas. She later reconciles with him 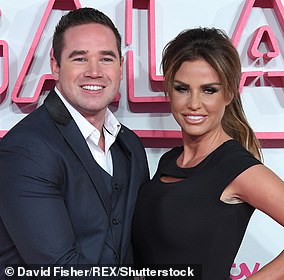 Third time not so lucky: Katie caught Kieran Hayler cheating with her friends

2017: Katie announces the pair will divorce after she catches the ex stripper sending intimate emails to their nanny Nikki Brown. The process is still ongoing

2018: Katie meets Kris at Sheesh in May, going Instagram official one month later. She breaks his trust by flying out to Mallorca with toyboy Alex Adderson, but they give their relationship a second chance  in the autumn of 2018

2019: Kris regularly features on Katie’s TV show My Crazy Life but they are yet to move in together. She hints Kris is ‘husband material’ and the pair are alleged to be trying for twins via IVF