James Harden on his Blue Lives Matter mask: ‘I thought it looked cool’ 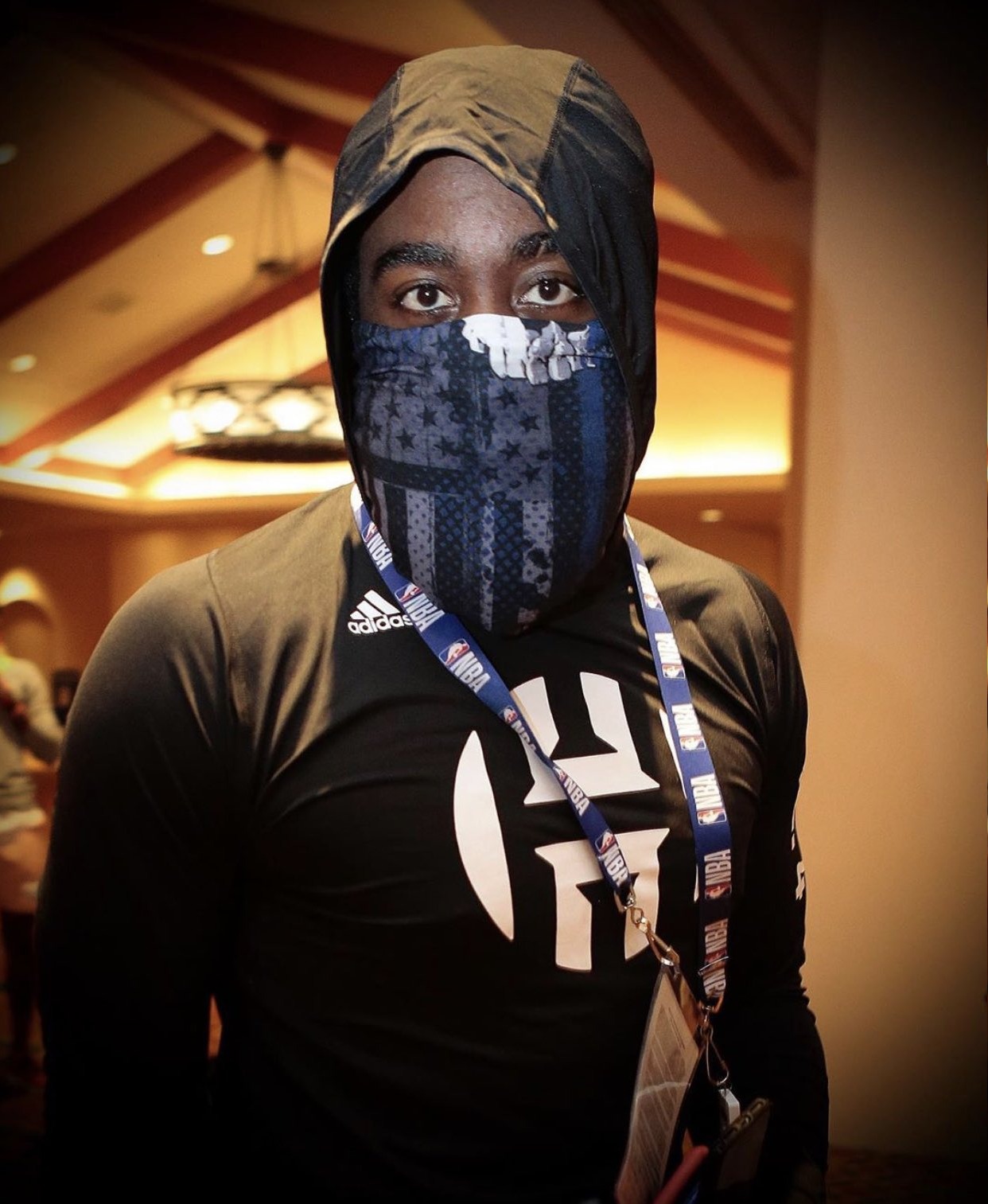 The NBA Bubble is still around for now and I can only imagine what the situation in Orlando will be like in a few weeks, as players go stir crazy isolated in their hotel rooms, and they continue to snitch on each other on the Bubble Hotline. For what it’s worth, I haven’t seen any of the NBA players put up a fight about masks though – all of them are wearing masks whenever they leave their hotel rooms and the only time they get to remove their masks is for the court. There’s been a wide variety of player-masks this far, but James Harden’s mask situation got a lot of attention. He plays for the Houston Rockets, and the team’s social media posted some photos of Harden in a black and blue mask with some kind of skull motif. People quickly pointed out that this is the “Blue Lives Matter” mask and Harden was dumb for wearing it. He’s saying he didn’t know the meaning:

Houston Rockets guard James Harden said he did not intend to make a political statement by wearing a “Thin Blue Line” mask Thursday and that he was unaware of what the mask represented. The Thin Blue Line — the American flag with a blue line as one of the stripes — shows support for law enforcement. That flag, as well as the Punisher skull that was on Harden’s mask, are sometimes seen as symbols that are against the Black Lives Matter movement.

“Honestly, I wasn’t trying to make a political statement,” Harden said before the Rockets’ practice Friday. “I honestly wore it just because it covered my whole face and my beard. It’s pretty simple.”

Thursday was Harden’s first day practicing with the Rockets at the NBA’s Walt Disney World campus after arriving five days after the team’s flight. Harden said he was considering ways that he could voice his support for the Black Lives Matter movement during the season’s restart, including whether he would have a social justice message on the back of his jersey. He reiterated that on Friday.

“I’m in the process of doing that right now,” Harden said. In regard to police, Harden said, “There’s people who do their job at a high level and there’s BS people in every profession.”

On Thursday, Harden expressed pride about Houston’s reaction to the death of George Floyd at the hands of Minneapolis police, which led to protests throughout the world. Floyd’s funeral was in Houston, the city where he grew up. “The way the city just, like, rallied, it was amazing,” Harden said Thursday. “I think the world saw it, how so many people could come together so close. Obviously, it was for a tragic reason, but the marching and everything we’re standing for is very powerful.”

After finishing that virtual news conference, Harden put on the Thin Blue Line mask, unaware of what it represented, he said. “It was just something that covered my whole beard,” Harden said. “I thought it looked cool. That was it.”

I’m including a look at the full mask below – it definitely looks like something a goth 14-year-old would choose for a mask, not someone trying to align themselves with the alt-right or police-supremacy movements. I think he just made an honest mistake and didn’t realize what the mask meant, truly. I wouldn’t have known it either unless it was explained to me. That being said, Black Lives Matter masks and scarves are all around! Players have been wearing those too. I wonder why he didn’t wear one of those? 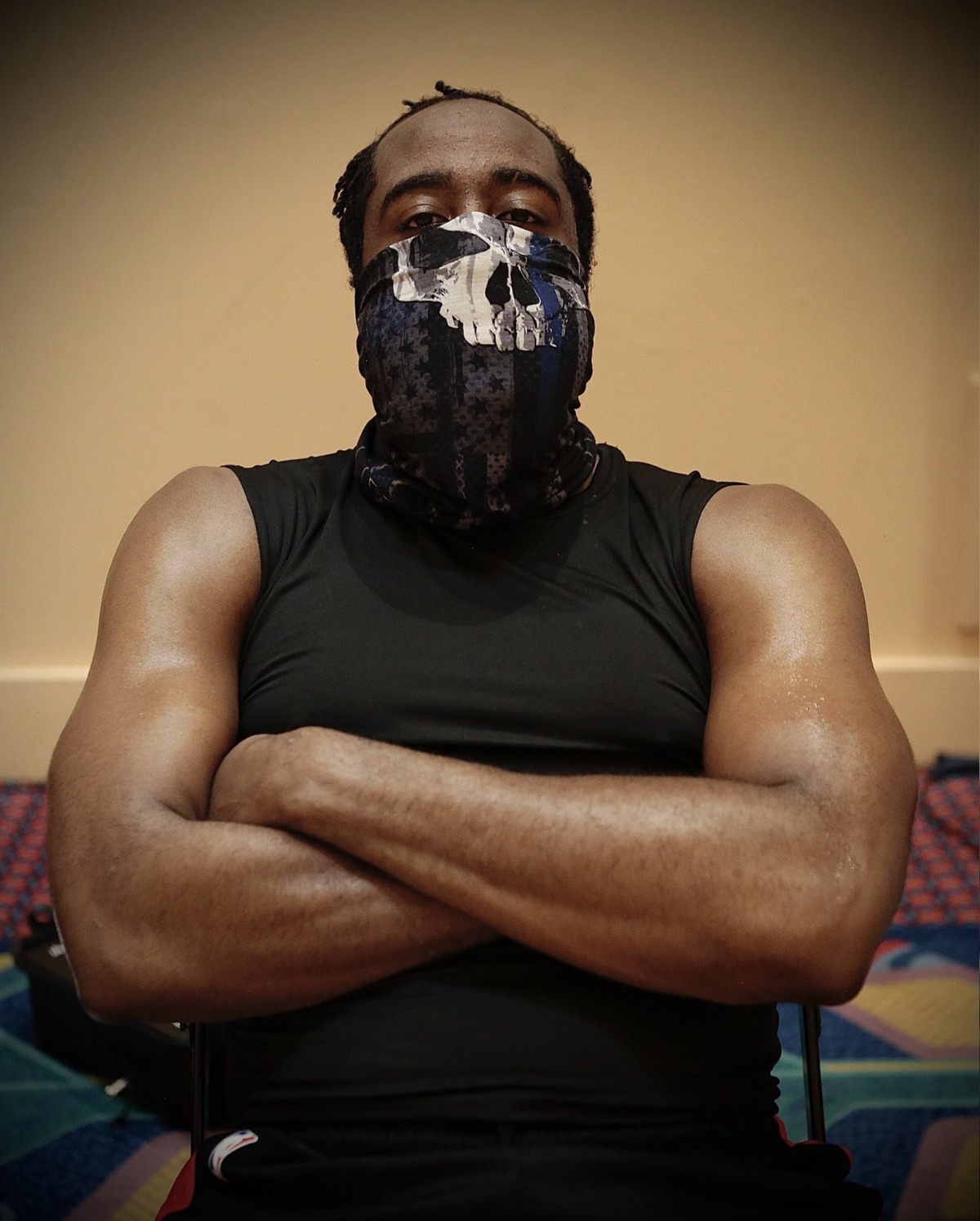