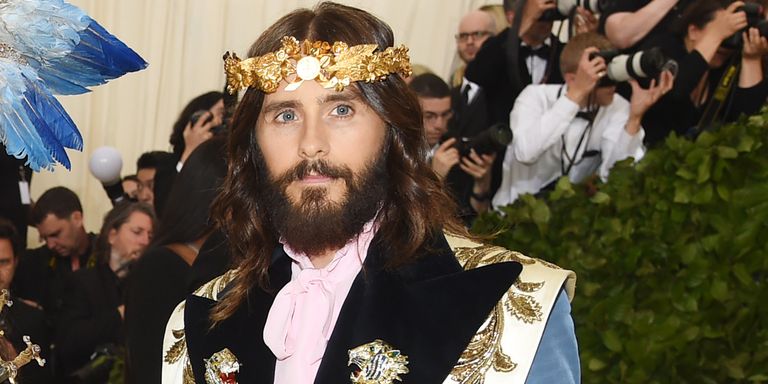 Tonight’s Catholicism-themed Met Gala is lending itself to many religion-inspired looks (case in point: Rihanna dressed as a Pope), but Jared Leto took things up a notch by showing up looking like Jesus himself.

The actor opted for a Gucci look (because, of course) at this year’s event. Taking the theme quite literally, he topped off his blue suit and ornately-embroidered stole with a gold crown of thorns.

You could say that Leto (along with Rihanna) won this year’s Met Gala with his dramatic interpretation of the theme, but to be honest, he does dress like this pretty much all the time. However, it’s especially impossible to look at him in this Gucci look without making comparisons to Jesus Christ.

Leto accompanied Gucci designer Alessandro Michele and Lana del Rey to the Met Gala this year. Before hitting the red carpet, the dreamy trio posed for a photo op in their coordinating looks—Michele and Leto looking like the Gucci-clad twins they were born to be.

Moments before the #MetGala, Gucci Creative Director #AlessandroMichele together with @lanadelrey and @jaredleto in custom #Gucci. #MetHeavenlyBodies