Ben Affleck was on Jennifer Lopez’s mind while considering her goals for the new year, as she said she wants to be the best romantic partner and ‘best friend’ she can be in 2022.

“Hey guys,” Jennifer Lopez said at the start of the Instagram video she posted on Monday (Jan. 10). “It’s raining outside right now, and – I don’t know – that puts me in kind of like, a pensive mood.” While holding up a sequined JLO Body Armor Lyte water bottle, J.Lo, 52, said she was just thinking about “what my intentions are for [2022]” before heading to her workout. The star of the upcoming Marry Me said she was thinking of being “really mindful of what I want my life to be,” and that includes being the best version of herself possible. “To be the best mother I can be, the best partner I can be, the best friend I can be, the best daughter, sister, boss – person – that I can be.”

Jen’s resolutions come months before the one-year anniversary of her romantic reunion with Ben Affleck. J.Lo and Ben, 49, rekindled their romance in April 2021, one month after she called off her engagement to Alexander Rodriguez. Since then, the “Bennifer 2.0” romance has been firing on all cylinders. The couple has taken their romance worldwide with several high-profile vacations and some PDA-filled dates.

Days before J. Lo’s resolutions video, she took to Instagram Stories to share the swag box she got in conjunction with his Amazon Prime movie  The Tender Bar. While marveling over Blue Point Brewing company beers and branded glasses, J.Lo gushed over Ben’s performance in the film. “There’s a great scene in a bowling alley with Ben and the little boy [Daniel Ranieri]. Ben plays his uncle [and] they’re both amazing in the movie. If you haven’t seen it, you should,” she said. 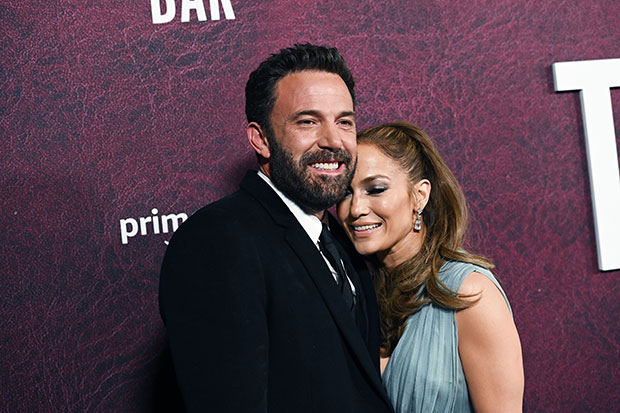 Before 2022 arrived, Jennifer sent some subtle love to Ben via an Instagram Selfie. “Cozy morning in my super puff,” she captioned the shot of her in the CliMATTE Super Puff jacket from Aritzia. Fans noticed that JLo’s coffee mug had the letter “B” on it, a not-so-secret shoutout to the man in her life.

In November, Ben went on The Howard Stern Show and said that he almost didn’t pursue J.Lo out of fear that it might harm his and Jennifer Garner’s three kids, Violet, 16, Seraphina, 12, and Samuel, 9. “My responsibility to my children is the highest responsibility. I don’t want to do anything that is painful or destructive to them if I can help it,” he said. “That being said, I know that my life affects them. Me and their mom are celebrities, and that is hard, let’s not bullsh*t each other, right? That is a cross to bear.”