EXCLUSIVE: Jordana Brewster puts on a VERY amorous display with new CEO beau while showing off her incredible bikini body… weeks after divorce from husband of 13 years Andrew Form

She filed for divorce from her husband of 13 years, Andrew Form, earlier this month.

But Fast & Furious star Jordana Brewster is wasting no time in moving on.

The 40-year-old actress is currently dating investment CEO Mason Morfit, and the pair having been packing on the PDA on a number of occasions over the past few weeks. 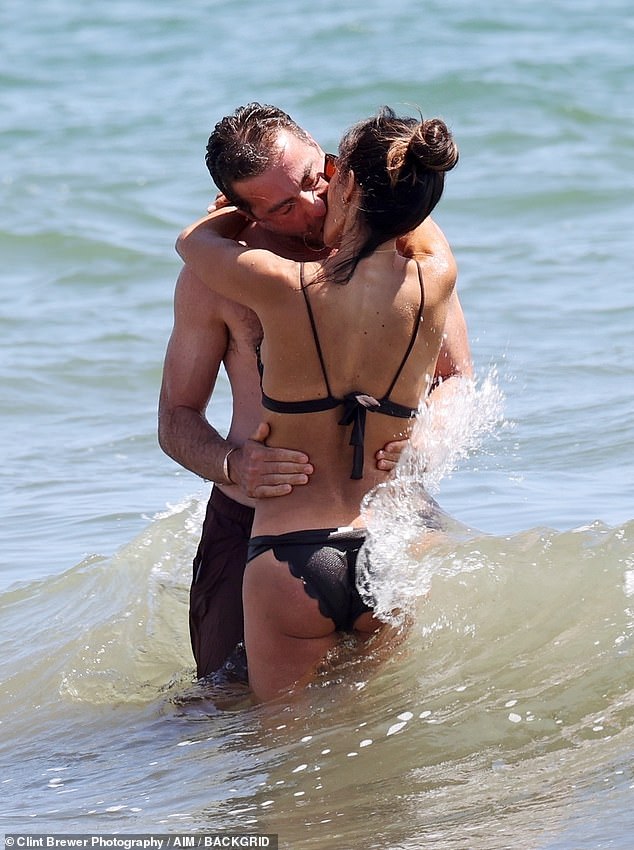 On Saturday, Jordana and her new man were seen passionately kissing one another while frolicking in the ocean in Santa Monica, Los Angeles.

Jordana showcased her incredible figure in a brown bikini, as she wrapped her arms around her beau.

The pair appeared to be having a very amorous kissing session while standing in the waves together. 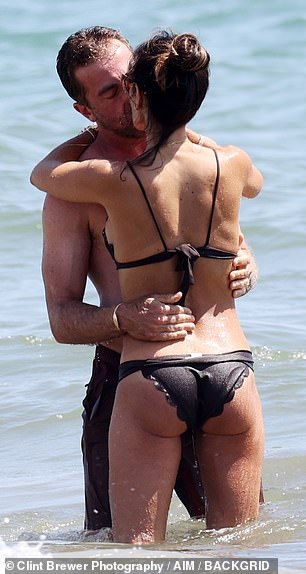 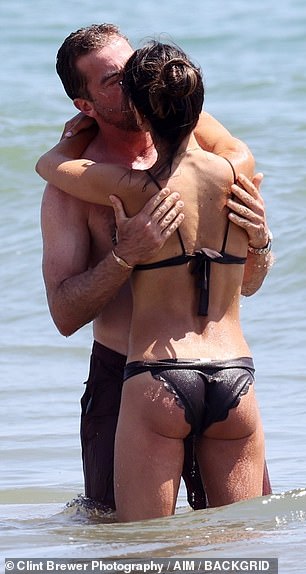 Fast and Furious: It’s not clear how long the pair have been dating, but they certainly appear to be in the honeymoon phase of their fledgling relationship 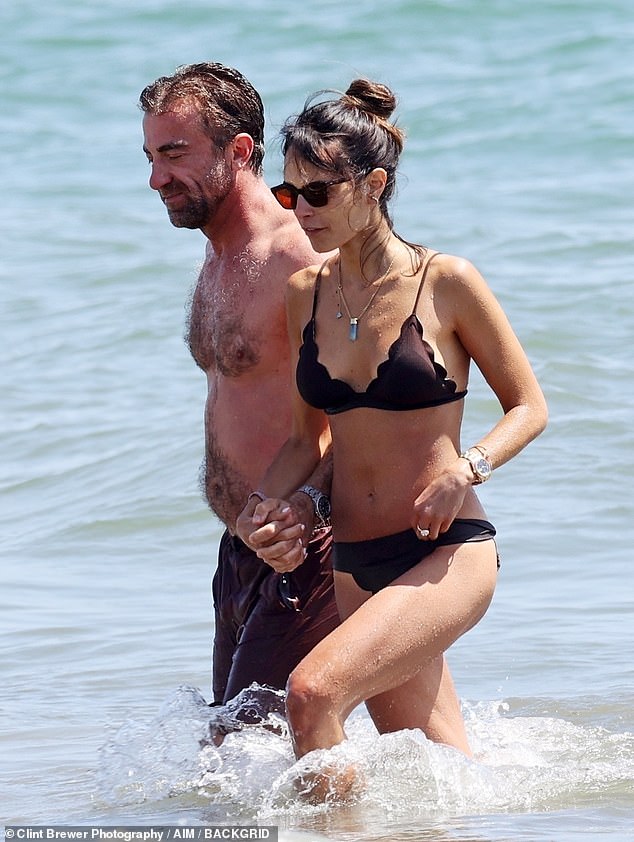 Loved-up: Jordana and Mason are making no secret of their love for another 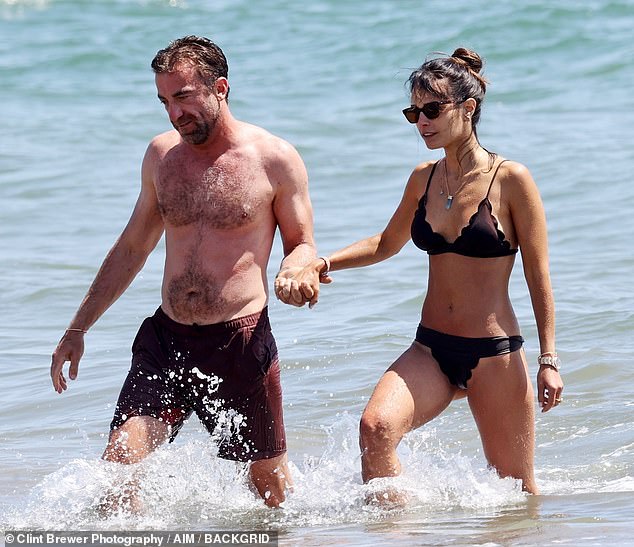 Romantic: The pair held hands as they climbed back out of the ocean after packing on the PDA 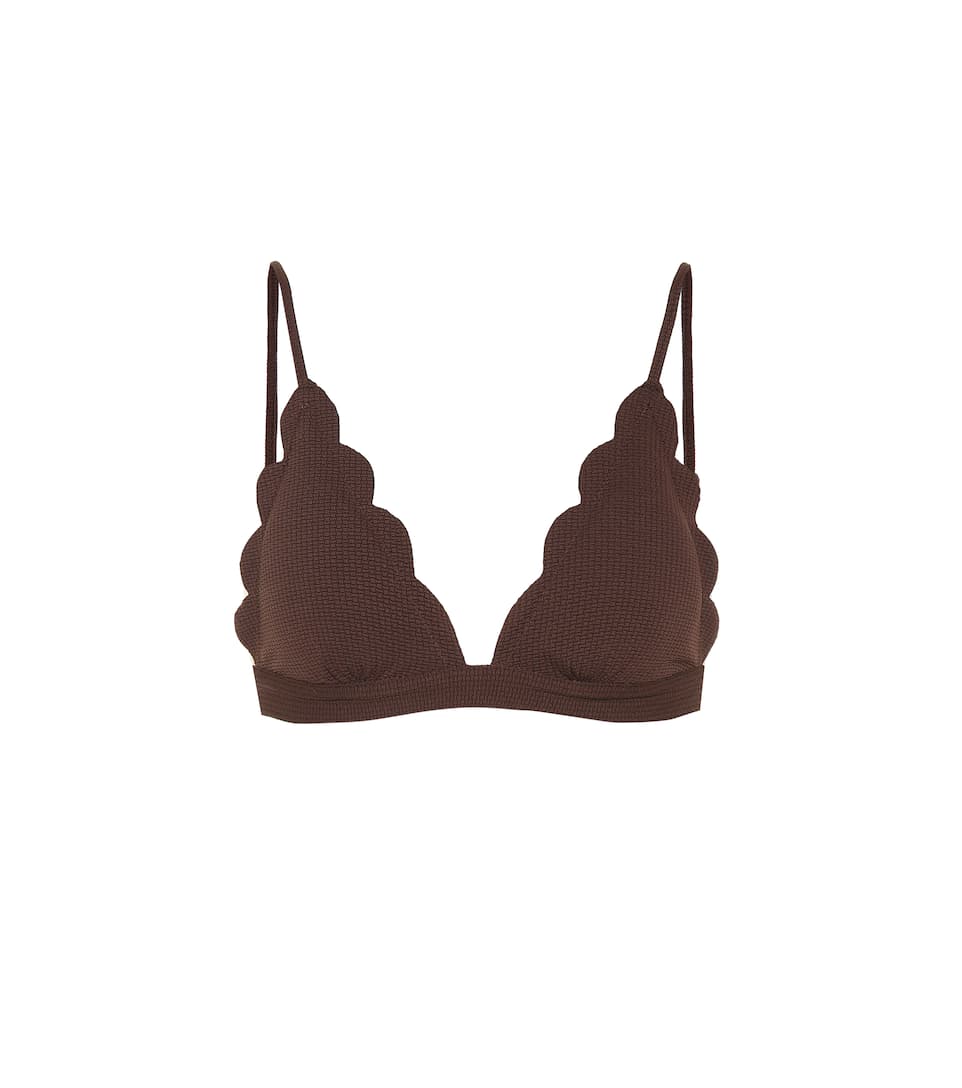 On July 1 this year, Jordana applied to legally end her 13-year marriage to Andrew – the father of her sons Julian, six, and four-year-old Rowan – after it was reported they had ‘quietly separated’ earlier this year.

According to TMZ, relations between the former couple are ‘amicable’, but it is unclear what caused their split.

Jordana met the 48-year-old producer on the set of their 2006 film The Texas Chainsaw Massacre: The Beginning but they initially kept their relationship under wraps as they felt it would have been ‘unprofessional’. 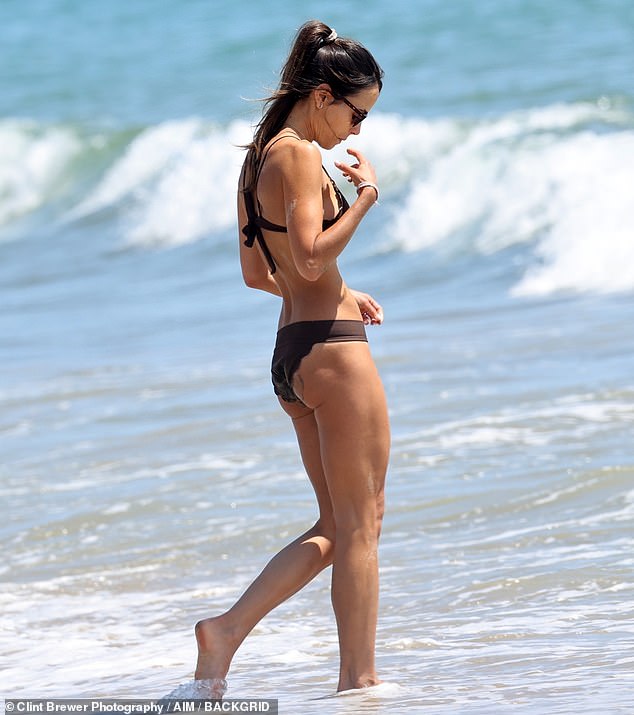 Tanned and toned: Jordana wowed in a brown two-piece on her day out at the beach 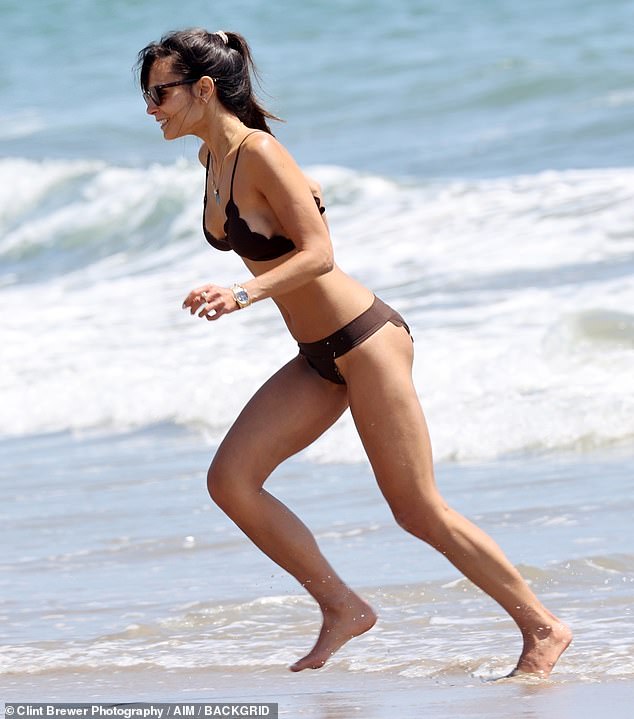 Fast and curious: It seemed Jordana wanted to test the waters to see how cold the ocean was 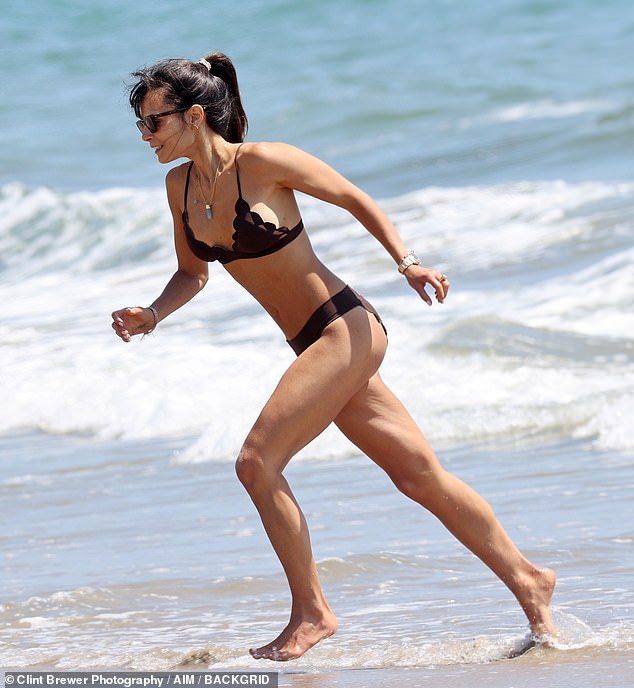 Not today: The actress runs away from an incoming wave to get back to her beau

The star previously said: ‘We started dating in secret – you know, hanging out in my trailer – because it would have been unprofessional otherwise.’

Meanwhile, it appears Jordana and her new love Mason Morfit are already well into their relationship as they have been spotted out now on numerous occasions together holding hands and looking loved up.

Mason is currently the President and Chief Investment Officer of ValueAct Capital, and was previously on the the Microsoft Board of Directors until November 2017. 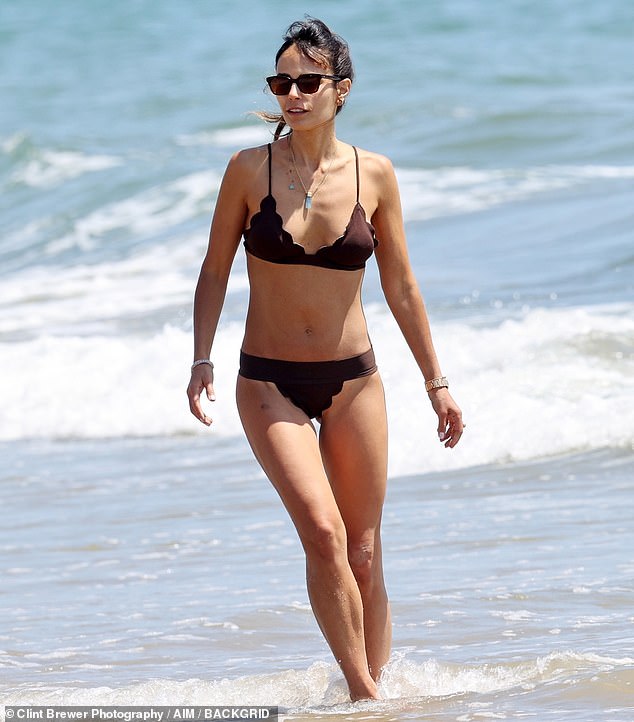 Making waves: Jordana shows off her amazing physique at the beach 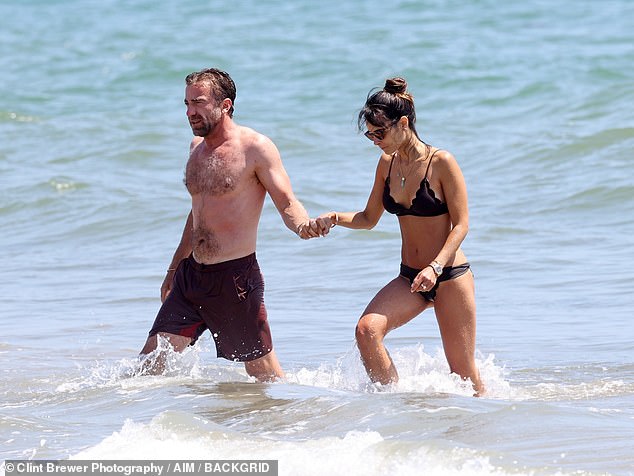 Making a splash: The pair are certainly fond of weekend trips to the ocean 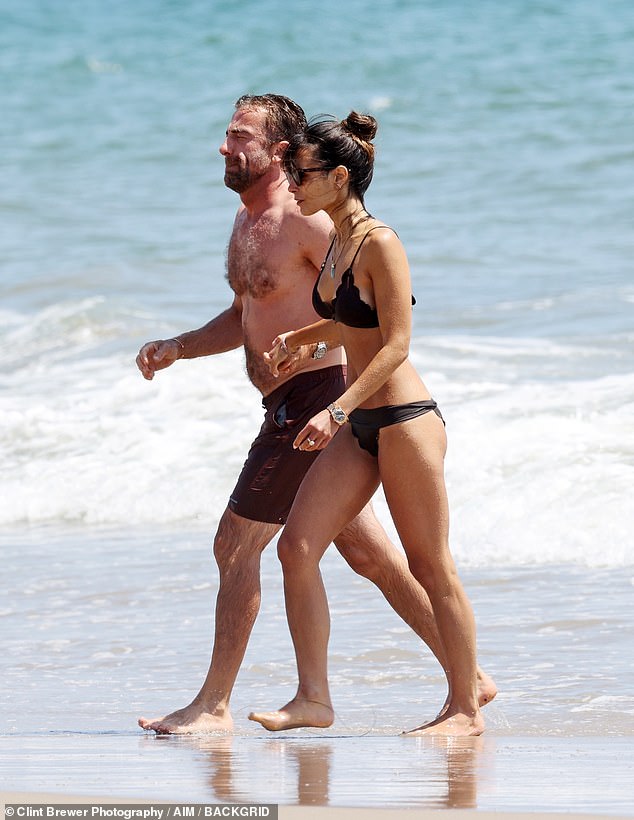 Hot new romance: The pair appear to be enjoying their company as they’ve been spotted out on numerous occasions this past week

Jordana recently opened up in an interview about her struggles as a mother and admitted that she is a ‘pretty neurotic’ parent.

She said: ‘But being a mom, in general, is not easy, obviously. I thought I would be a chill supermom, but I’m not – I’m pretty neurotic. Having kids really kicked up my anxiety and made things like meditation that much more important for me.’

‘And kids really are mirrors back to you! My son Julian is a lot like me. He’ll see the negative in something or he will always question things. 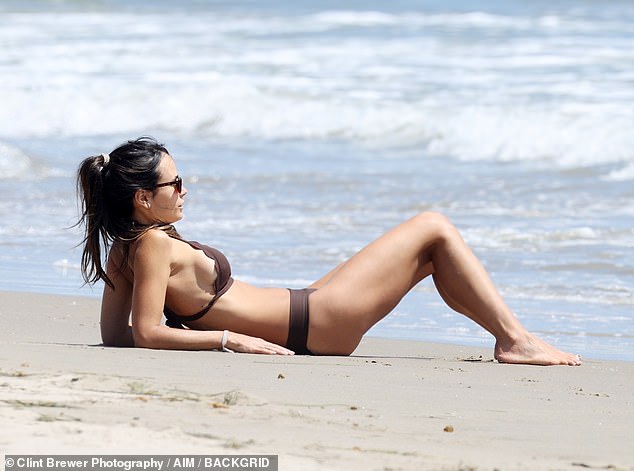 Sunning herself: The actress showed off her stunning figure while sunbathing 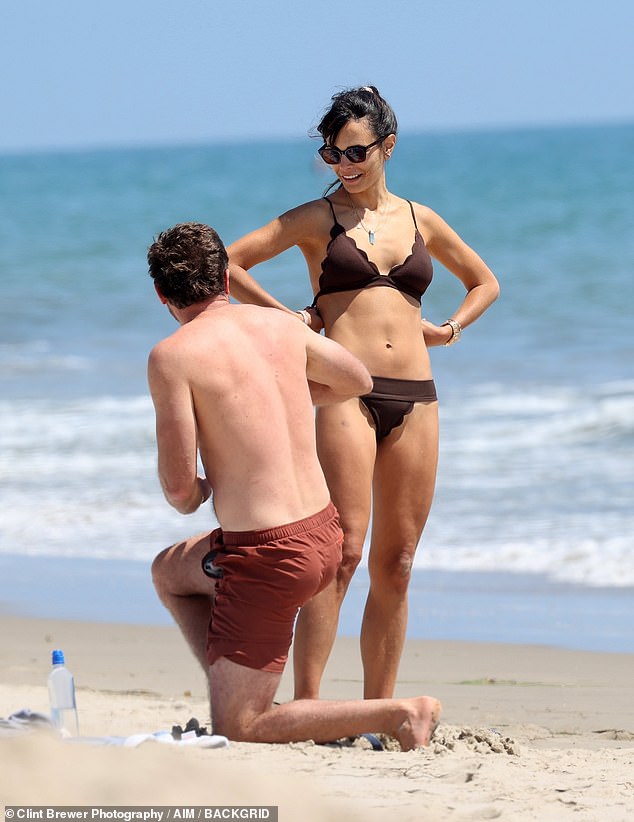 Getting down on one knee: The couple certainly have been moving fast in their union 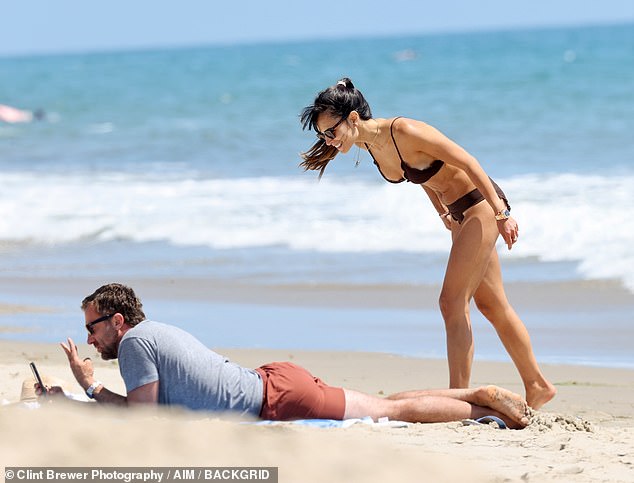 Peace out: Mason appeared to be taking a selfie with Jordana in the background 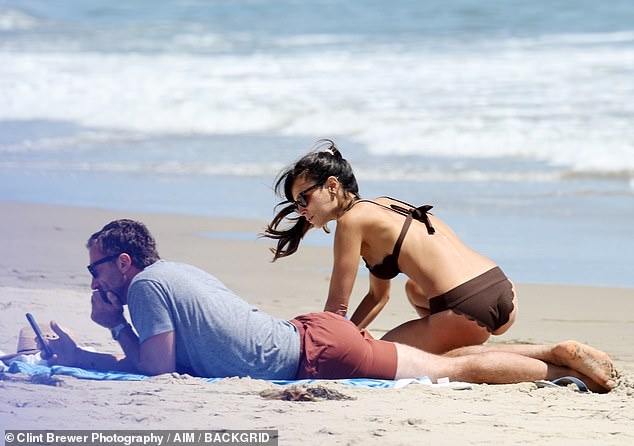 Let me see: The couple look at his phone after taking a shot 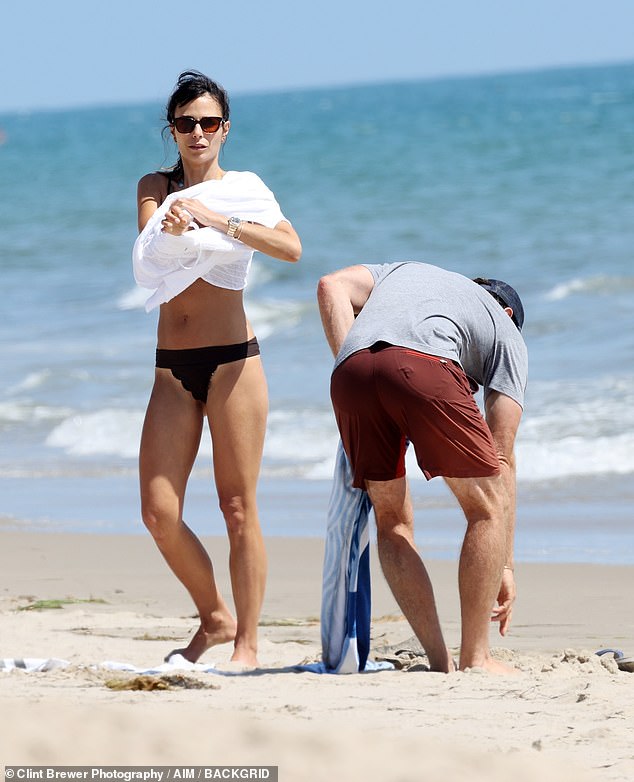 Packing up: The pair got their things together to head home after a day of fun

‘He’s really smart, so he keeps me on my toes. There are certain things I have to do now, like going on set, that I wouldn’t have thought twice about back in the day. I’ll make my boys calendars and say, ‘This is when mommy is coming back. This is what your schedule is. This is what we’ll do then.'”

‘That helps with all of our anxiety. I strive really hard to be a good mom and not take it too far where I’m being crazy-neurotic. What helps me the most is talking to my friends who have similar issues and are going through similar things.’

‘The only bummer is that I don’t have that many actor friends who are moms, and I need some more of that in my life because it’s just such a unique position to be in.’ 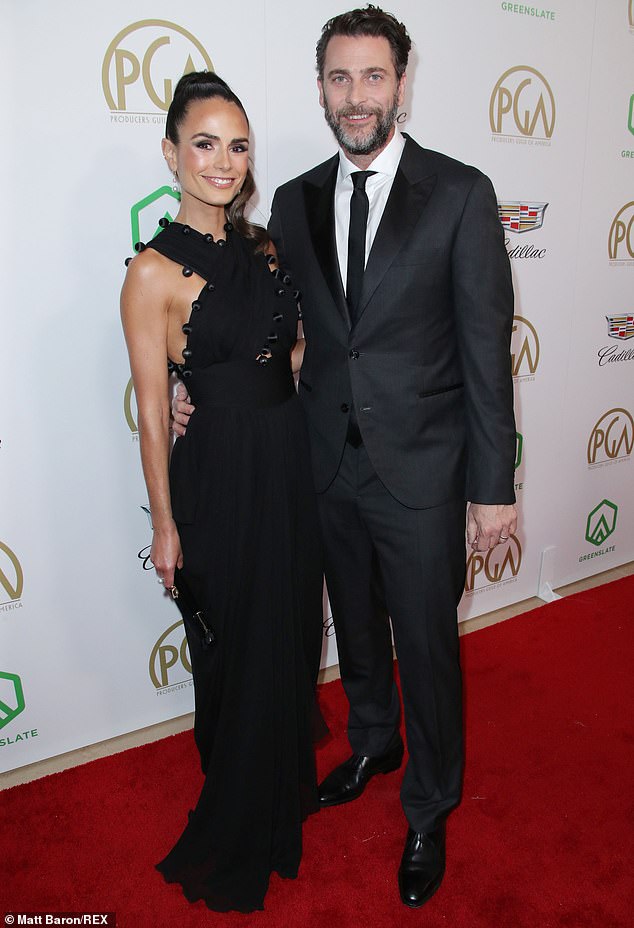 Ex: On July 1 this year, Jordana applied to legally end her 13-year marriage to Andrew Form (pictured last year) – the father of her sons Julian, six, and four-year-old Rowan