Kanye West’s friends are calling him out after his recent Twitter rant expressing support for President Donald Trump — and he’s sharing those conversations with the world.

John Legend texted West, 40, on Thursday, April 26, one day after his slew of controversial tweets. The Yeezy designer tweeted a screenshot of the private conversation minutes later.

“Hey it’s JL. I hope you’ll reconsider alining yourself with Trump. You’re way too powerful and influential to endorse who he is and what he stands for. As you know, what you say really means something to your fans. They are loyal to you and respect your opinion,” wrote the “All of Me” crooner, 39. “So many people who love you feel so betrayed right now because they know the harm that Trump’s policies cause, especially to people of color. Don’t let this be part of your legacy. You’re the greatest artist of our generation.”

The 21-time Grammy winner replied: “I love you John and I appreciate your thoughts. You bringing up my fans or my legacy is a tactic based on fear used to manipulate my free thought.”

West then tweeted an explanation for posting the private messages. “I tweeted the John text to show that there are people around me that disagree with me and voice their opinion,” he noted. “I respect everyone’s opinion but I stand my ground. If you feel something don’t let peer pressure manipulate you.”

Legend strategically responded to the “Famous” rapper upon realizing that he was tweeting their text exchange. “Think freely. Think with empathy and context too,” he urged. “Your words and actions have consequences. Much love.”

The Oscar winner added: “And since you’re posting texts, let me add that I have a new single out haha,” in reference to his track “A Good Night.”

West took to Twitter again to reflect on the conversation afterward. “I really appreciate this dialogue with John Legend because I’m actually very empathetic. I’m still the kid from the telethon. I feel when people think of [Make America Great Again] they don’t think of empathy,” he wrote. “This is year one. We can’t ad empathy to MAGA by hating. We can only ad empathy with love and time and truly healing all sides.” 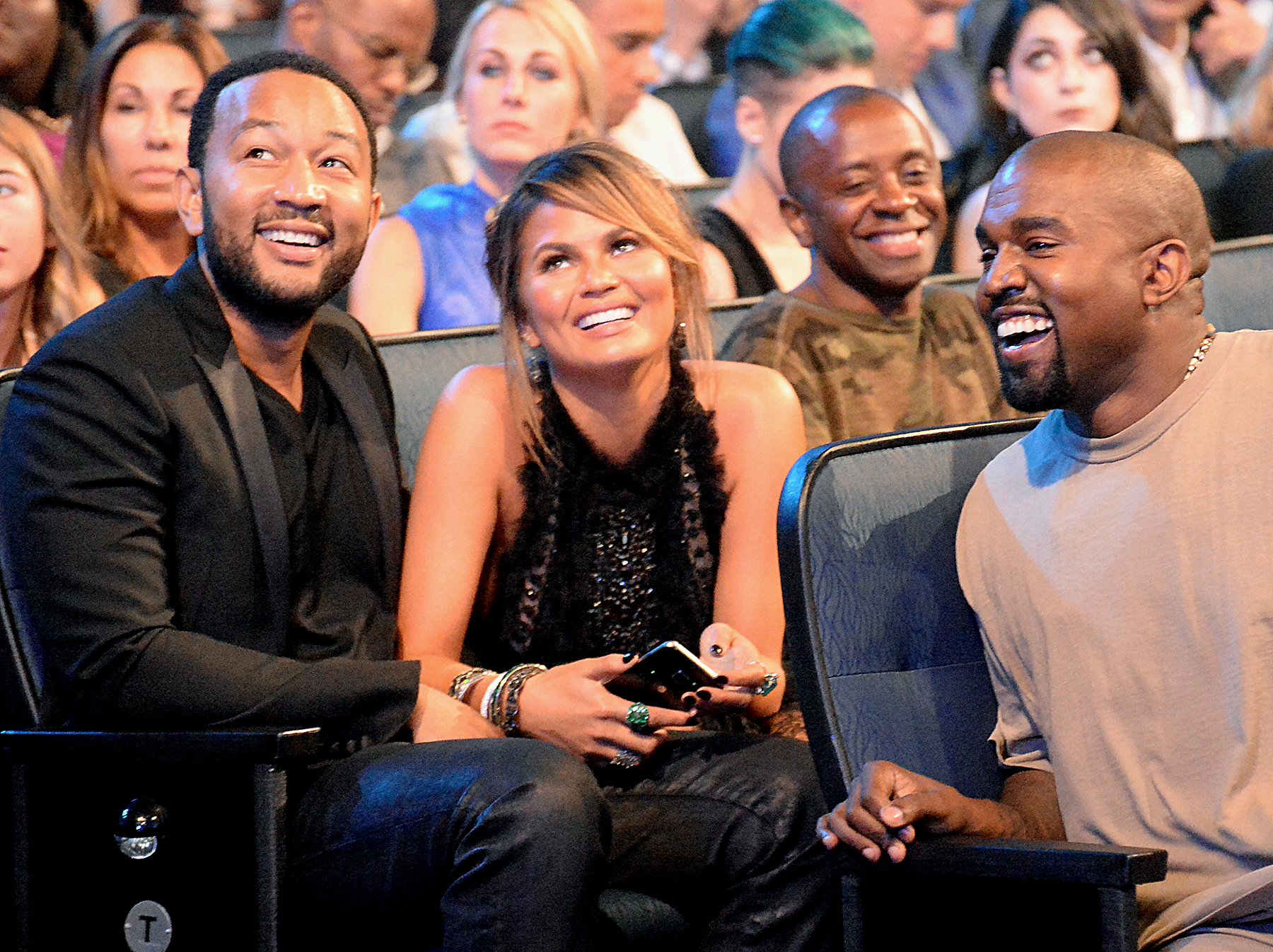 Legend’s wife, Chrissy Teigen, who famously feuded with Trump via Twitter before he blocked her last July, also chimed in. “Everyone keeps asking me to comment on s—t … speak up about Kanye. When it comes to people we know, we DO speak up. To THEM,” she explained. “Not on Twitter. And sometimes, I guess it makes it to Twitter.

The Lip Sync Battle cohost, 32, also made light of the situation by retweeting West’s screenshots and complimenting his cell phone quality. “This is the most elaborate and complex google pixel phone ad I have ever seen,” she joked.

Legend first criticized West’s perspective via Twitter on Wednesday, April 25, writing, “I love that great, brilliant artists have the power to imagine a better future. But artists can’t be blind to the truth.”

More celebrities including Wendy Williams, Rosie O’Donnell, and Perez Hilton also slammed the Adidas designer via social media after he made headlines for praising Trump, 71, as his “brother.” On the other hand, West’s wife Kim Kardashian supported his right to speak his mind and be a “free thinker.”

Teigen reached out to the KKW Beauty founder, 37, after West’s most recent rant. “Are we still doing dinner Friday or no lol,” she asked. The E! personality joked back, “Yes but maybe no phones.”

The commander in chief later retweeted West, thanking him for his “very cool” words. Trump also called into Fox & Friends on Thursday to elaborate on his friendship with the Adidas designer.

“He sees that stuff and he’s smart,” the real estate magnate continued. “He says, ‘Trump is doing a much better job than the Democrats did.’”