Still fab at 40! Kelly Brook ’embraces her post-lockdown curves’ as she poses in a gold string bikini for new unairbrushed swimwear campaign

Kelly Brook showed off her sensational curves in a series of unairbrushed photos which were released on Thursday.

The brunette bombshell, 40, looked incredible as she modelled a skimpy gold string bikini by F&F, while wearing a leaf-print kimono over the top.

Standing outside in the back garden of her country pad in Kent, Kelly appeared body confident as she posed up a storm in black and gold wedge heels. 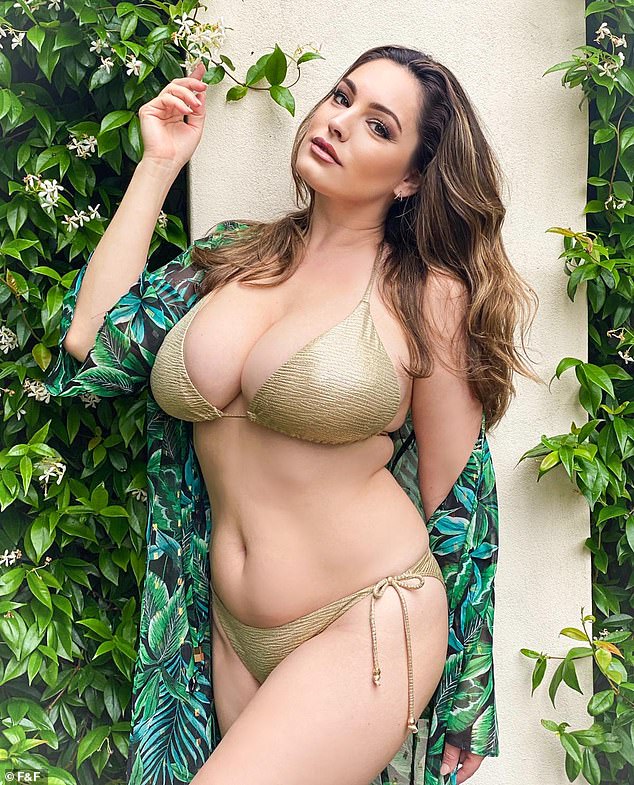 Still fab at 40! Kelly Brook ’embraced her post-lockdown curves’ as she posed in a gold string bikini for a new unairbrushed swimwear campaign for F&F on Thursday 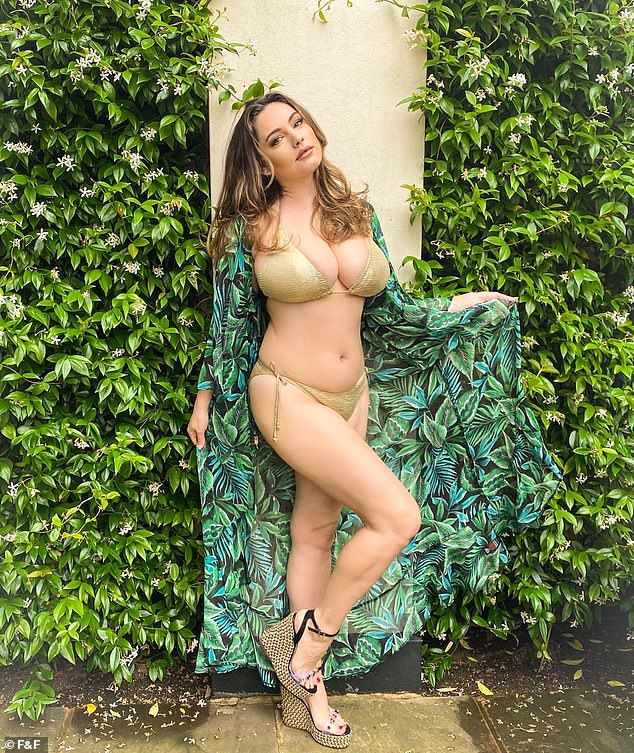 Strong woman: Standing in her own back garden in her country pad in Kent, Kelly appeared body confident as she posed up a storm in black and gold wedge heels

The stunner took to Instagram to write about how good she was feeling.

She penned: ‘Embracing my Curves post Lockdown in this Beautiful Bikini and cover up from @fandfclothing.

‘They have always championed women of all shapes and sizes so as we approach the summer let’s embrace our body’s love our Curves. [sic]. 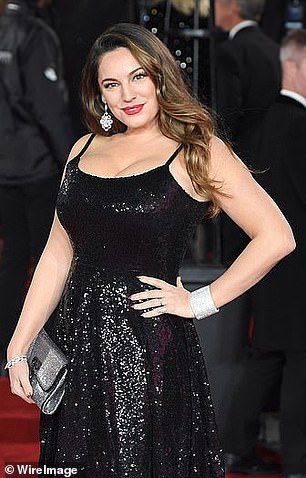 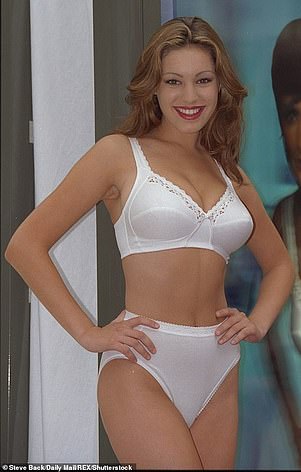 Pin-up: She’s famed for her hourglass curves, yet Kelly revealed she didn’t feel healthy or beautiful at her curviest, after ‘creeping up’ to a size 16 in 2017 (left)

Last week, Kelly claimed that sex gets better with age and said her longterm love, hot-bloodied Italian Jeremy Parisi, 35, is a big fan of her curves.

Talking on Vicky Pattison’s The Secret To… podcast, she said: ‘My boyfriend is 35 and he is Italian, so, you know, he likes a nice large curvy woman so that’s always a good thing! I think your sex life gets better as you get older! 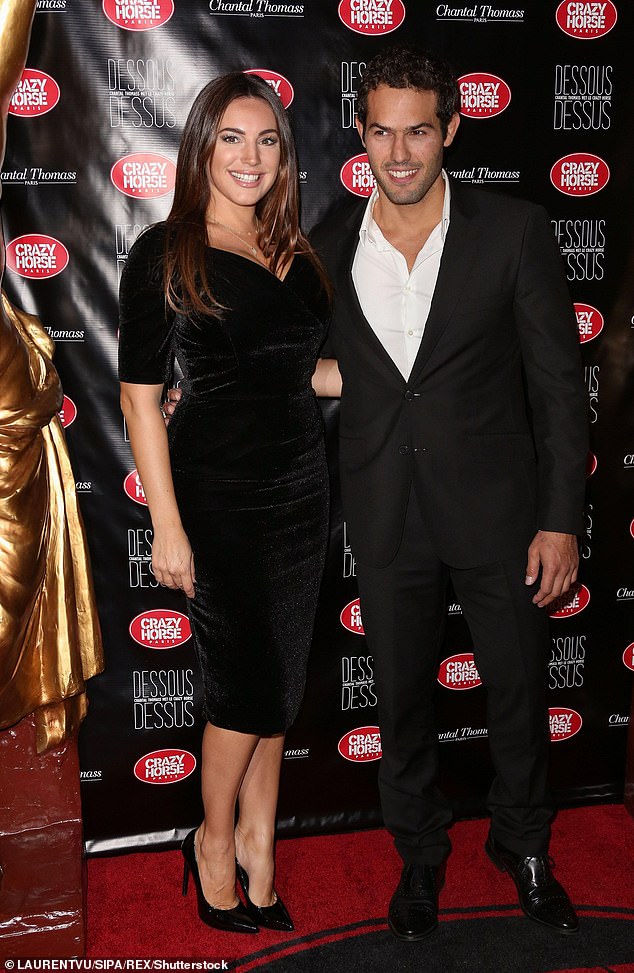 Kelly recently said: ‘My boyfriend [Jeremy Parisi] is 35 and he is Italian, so, you know, he likes a nice large curvy woman so that’s always a good thing!’ (pictured in 2016)

‘When you’re young you don’t tell them. They are like “is that nice?” or whatever and you’re like “yeah!” When you’re older you are gonna make sure you get what you want!’

The pair have been dating for nearly five years, having started dating in 2015.

Kelly famously began modelled aged 16 after she won a beauty competition, which her proud mother had entered her into.

Campaigns for the likes of Bravissimo, Foster’s and Walker’s crisps followed, as well as shoots with lads’ mags such as GQ, Loaded and FHM.

FHM dubbed her the winner of their 1’00 Sexiest Women in the World’ list in 2005, which polled 15 million people. 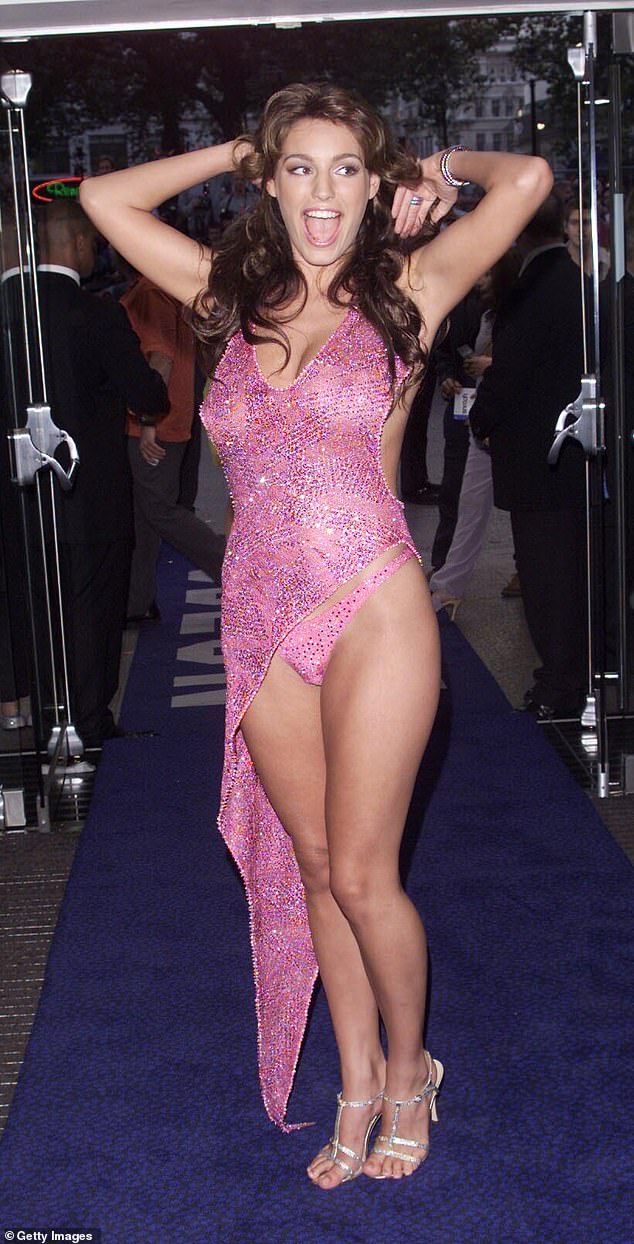 Iconic: Kelly made headlines everywhere when she wore this daring pink Julien Macdonald dress to the Snatch premiere in 2000