The two longtime best friends stepped out for a little retail therapy in Malibu on Thursday afternoon.

Their fun outing comes just one month after Malika, 36, announced that she is expecting her first child with her ex-boyfriend O.T. and her bestie Khloe, 35, has been right by her side to support her. 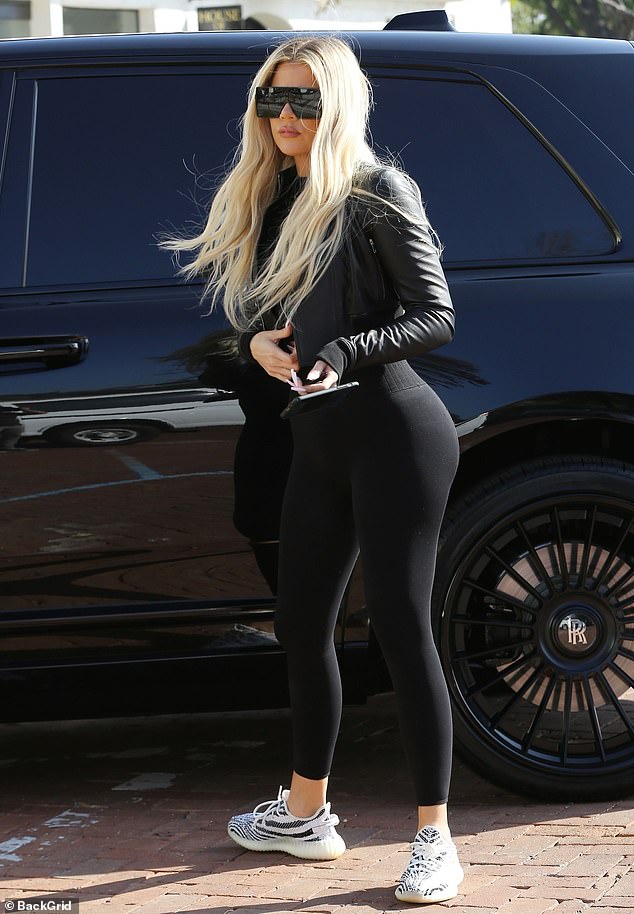 Stepping out: It’s a girl’s day for these two best friends, Khloe Kardashian and her best friend Malika Haqq who stepped out for a shopping trip Stylish: Malika cut a stylish figure as she showed off her growing baby bump while out with her longtime friend in Malibu

After her play-date with her one-year-old daughter True out in her backyard, the fashion designer dressed down for the casual outing.

Khloe wore a pair of black leggings that showed off her toned curves. She paired them with a black jacket and white pair of Yeezys.

Her mom-to-be best friend kept it casual in a long black coat and leggings. The television personality elevated the look with a pair of black Balenciagas. 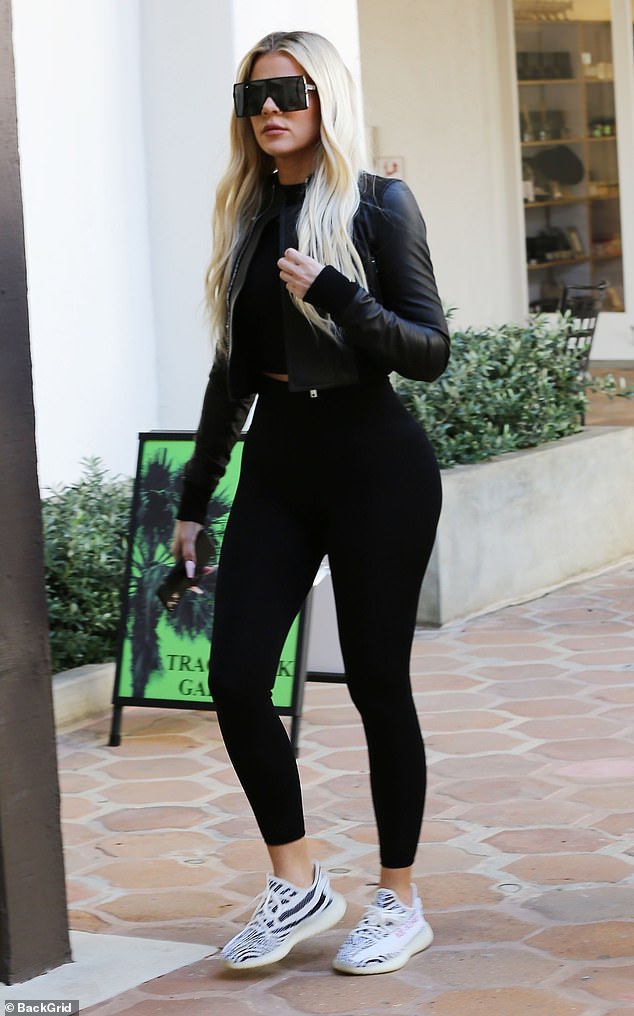 Casual outing: After her play-date with her one-year-old daughter True out in her backyard, the fashion designer dressed down for the casual outing 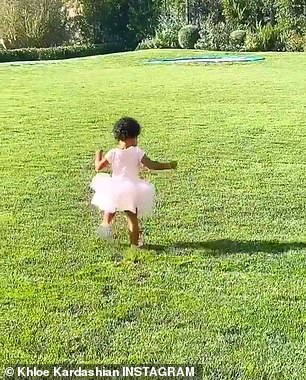 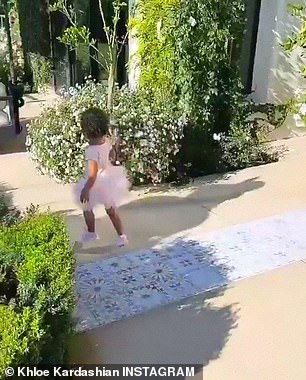 Adorable: The little one sported an adorable outfit complete with a pink tutu 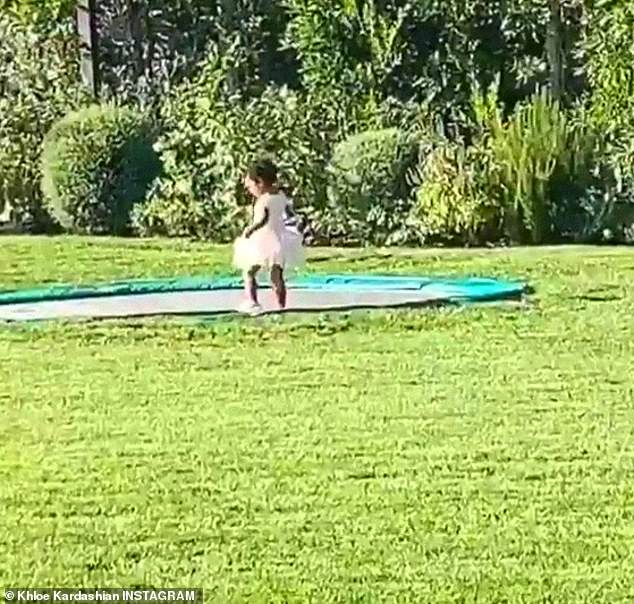 Made it! True made it to her trampoline and didn’t waste any time before hopping away

Meanwhile, Khloe’s two famous sisters had a busy afternoon. Kim, 39, opened up about her recent fragrance collaboration with Khloe and their other sister,  Kourtney, 40.

‘I love doing collabs with my sisters. It makes me feel kind of nostalgic,’ the reality star revealed to ET. ‘We haven’t really done anything together, the three of us in so long, at least for a decade… We kind of branched out and started doing our own projects, so to me, this was a no-brainer.’

The new KKW Diamond Fragrance collection launched on November 8 for $40 a bottle which features scents from Kourtney (the yellow bottle), Khloe (pink), and Kim (clear.) 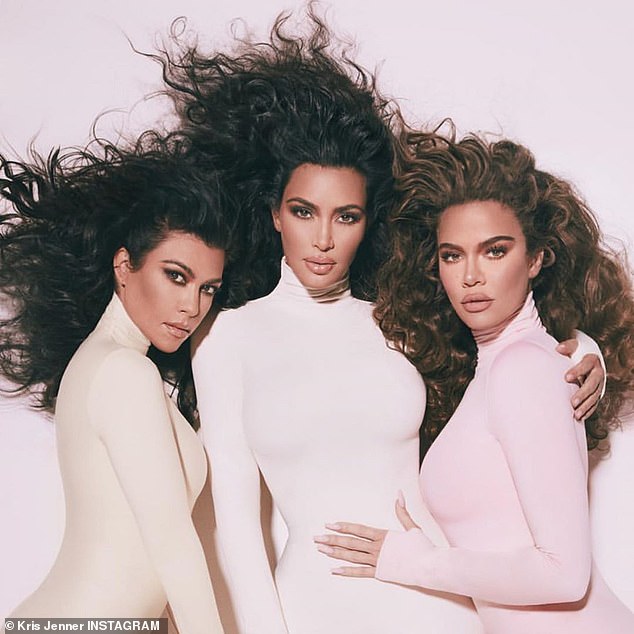 Sisters: Kourtney, Kim, and Khloe pose with matching hairstyles and outfits as the promote the new KKW fragrance

While each sister created their own scent for the collection, Khloe didn’t let her sister get away with out praise for the fabulous collection.

‘Well, this is Kim’s expertise. She’s been with the fragrance world for so long, and she’s so successful at it, so I think Kourtney and I both definitely take her lead and she knows what she’s doing,’ she revealed during the interview.

‘But when it came to our scents, that was very personal. We all would say if we liked the scent or not, it was really up to us as the scent part of it all, but Kim is so good at this that we definitely respect her opinion.’

‘Well, mine is actually very sweet,’ the Revenge Body star said of her pink-bottled scent. ‘Mine’s jasmine and lilac and tuberose are, like, their main scents, but mine is just my signature scent. It’s something that I’ve always been drawn to, they’re my favorite notes and to combine them all and they work really well on your natural body oil, so I love them.’ 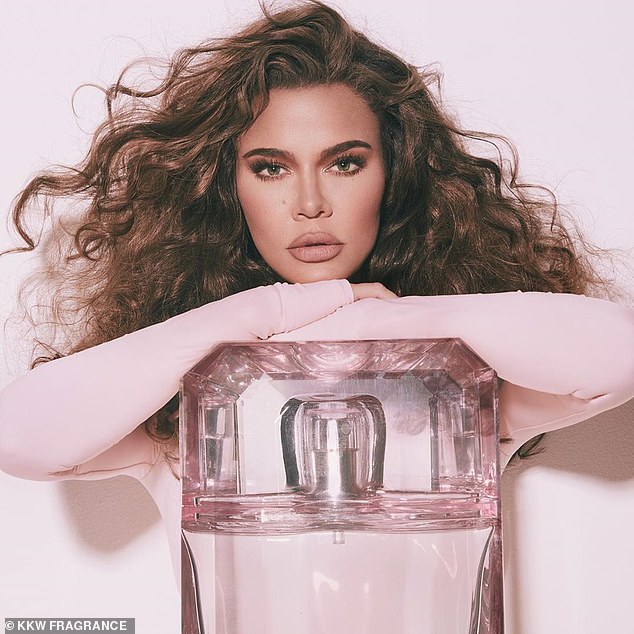 Brunette: For the shoot Khloe opted for a brunette vibe with a full head of curly hair to promote her new fragrance with her sister

After the interview, Kourtney jetted off to the airport to catch a private flight to San Francisco.

On her way, the mother-of-three gave money to a homeless man while at a stoplight in her all-black Range Rover.

After arriving, the Poosh founder quickly boarded her jet with a coffee in hand as she heads to the Environmental Working Group. 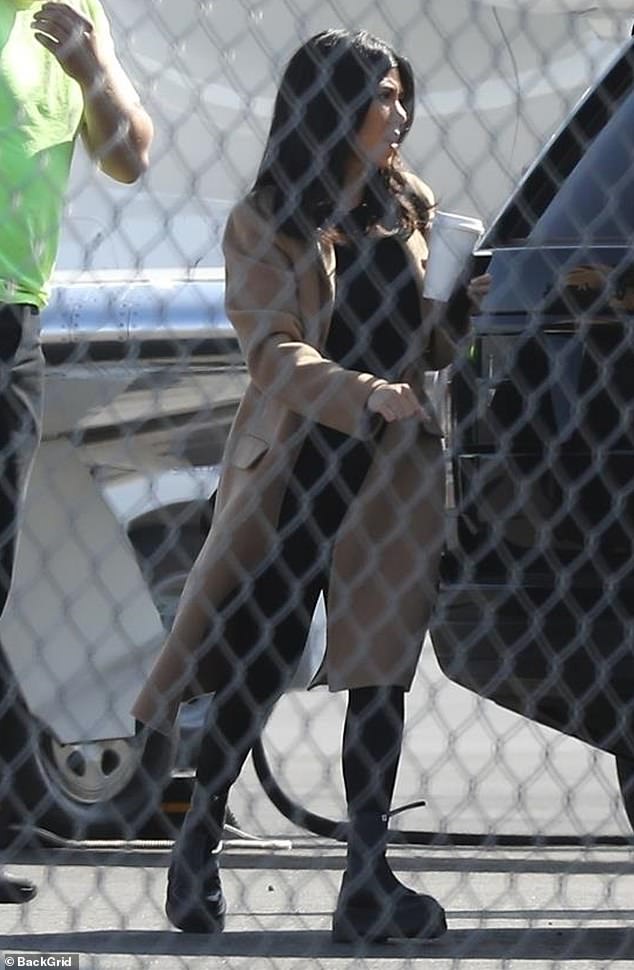 On-the-go: Kourtney is spotted arriving at the airport as she boards her private jet to San Francisco

Recently, Kourtney revealed that she’s played with the idea of leaving the long-running Keeping Up With the Kardashians show on the E! Network.

‘I just decided to spend more time as a mom and put more of my energy there,’ she revealed about her three children Mason, Penelope, and Reign.

‘But I’m not saying goodbye,’ she told the outlet on Thursday. ‘I think you’ll have to see more of it on the new season, season 18,’ she adds. ‘It isn’t airing yet but it’s being filmed.’

‘I feel like it’s a revolving door, so Kourtney might leave this week, [but] she’ll be back,’ Khloe chimed in during the interview. ‘They all come back.’

Kourtney also added that she’s played with the idea of moving to different places but quickly recounts until she’s found the perfect place: ‘I keep throwing up different places, but then I’ll go there to visit and I’ll be like, ‘Nope, this isn’t it, but glad I came. We’ve just been to Finland. And I was like, ‘Check, it’s great for me to visit, but I’m not going to move there.’ Maybe Norway. Switzerland? I’ve got a lot of ideas.’ 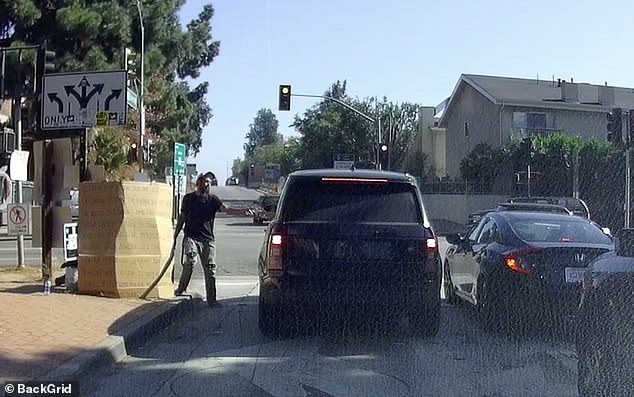 Paying it forward: Kourtney stopped at a traffic light when she noticed a homeless man. She dug out her wallet and gave the man some cash

Nicole Scherzinger 'is trying for a baby with beau Thom Evans'

Bollywood stars Amitabh Bachchan and his son Abhishek have COVID-19

Brooklyn Beckham and Nicola Peltz 'will have TWO weddings next year'

Joel Edgerton Slips Into Tight Wetsuit for Dip in The Ocean!