She was recently given a compliment from a very unlikely fan after revealing her insecurities over her legs.

And Khloe Kardashian lavished praise on Strictly star Maisie Smith and her ‘beautiful’ body once again in a sweet tweet this week.

The reality titan, 36, responded to a fan who tweeted about her Instagram comment to Maisie, 19, and wrote: ‘Maisie Smith is very high on my list of ‘people who I wouldn’t expect to have @khloekardashian in their Instagram comments’ but I’m here for it. 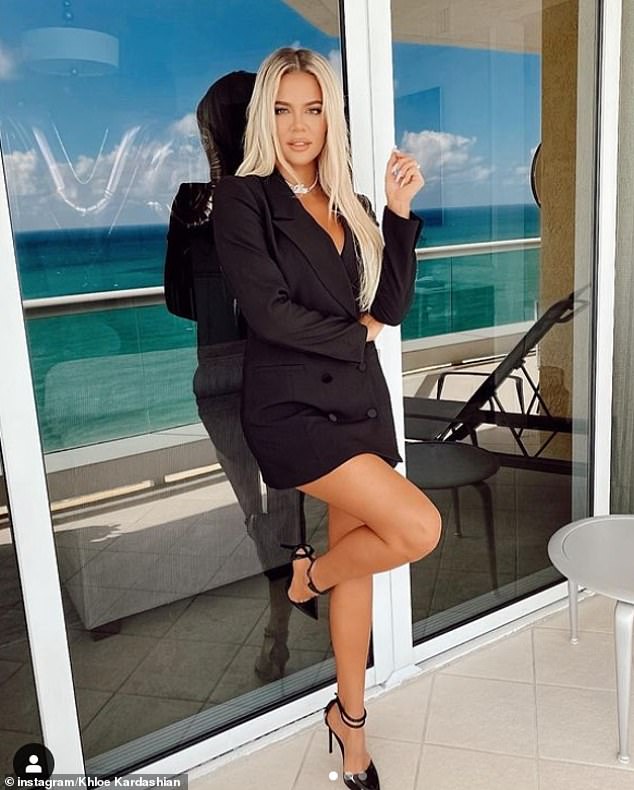 Support: Khloe Kardashian lavished praise on Strictly star Maisie Smith and her ‘beautiful’ body once again in a sweet tweet this week

The Keeping Up With The Kardashians star wrote: ‘I don’t know her But that doesn’t mean that we can’t uplift one another.

‘Spread love/positivity. She was insecure about her beautiful body, I wanted her 2notB.'(sic)

Maisie and Khloe first crossed paths last week when the actress shared a very candid post discussing her body confidence struggles and revealing how she used to ‘hate’ her legs. 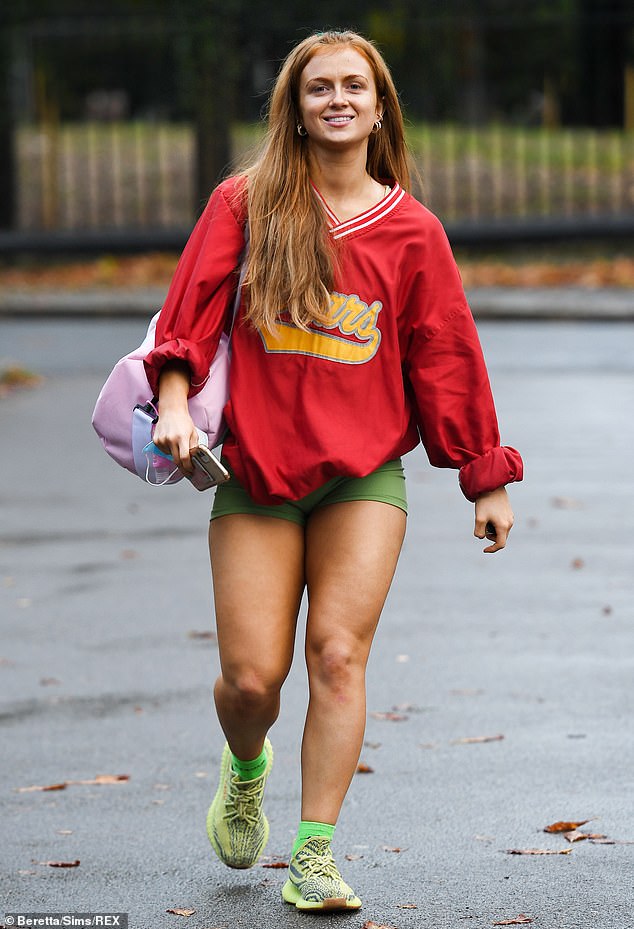 Stunning: Khloe previously commented on Maisie’s Instagram post about ‘hating’ her legs, showing her support and gushing over her ‘envy worthy’ physique 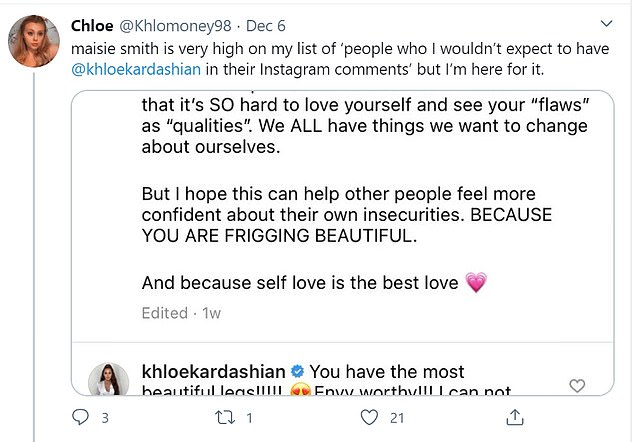 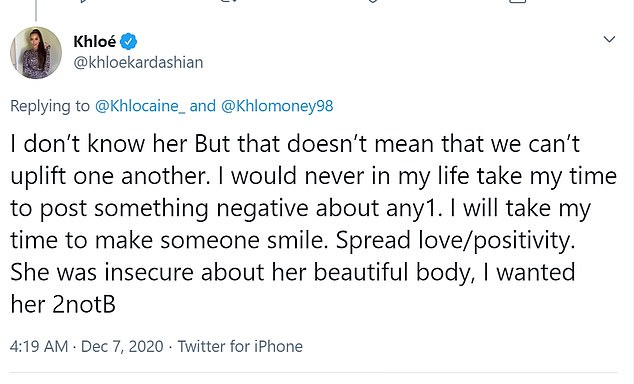 Cute: The reality titan, 36, responded to a fan who tweeted about her Instagram comment to Maisie, 19, and praised Maisie’s ‘beautiful body’

The surprised Strictly contestant took to social media on Sunday to share the sweet message she had been left by the reality star.

Sharing a screenshot of her post and comments, Maisie wrote ‘LOL why am I so gassed’ as she showcased the compliment.

Khloe had penned: ‘You have the most beautiful legs!!!!! Envy worthy!!! I can not build my legs for the life of me! So I’m drooling over yours… you are gorgeous!!!!!!

The TV star left her supportive comment an entire seven days after the EastEnders actress shared the collection of images showing her leaving the gym. 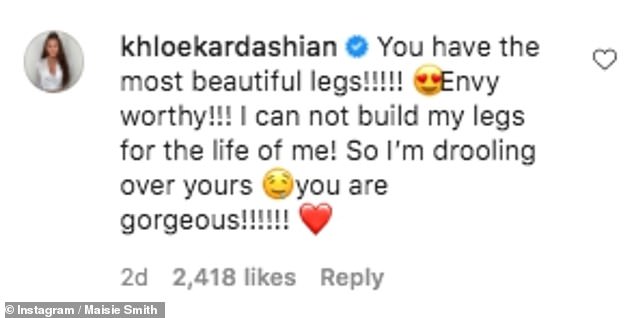 Gushing: The reality star previously told Maisie that she was ‘gorgeous’ and was ‘drooling’ over her legs

What a response! Maisie simply replied to Khloe saying ‘thanks chicken’ 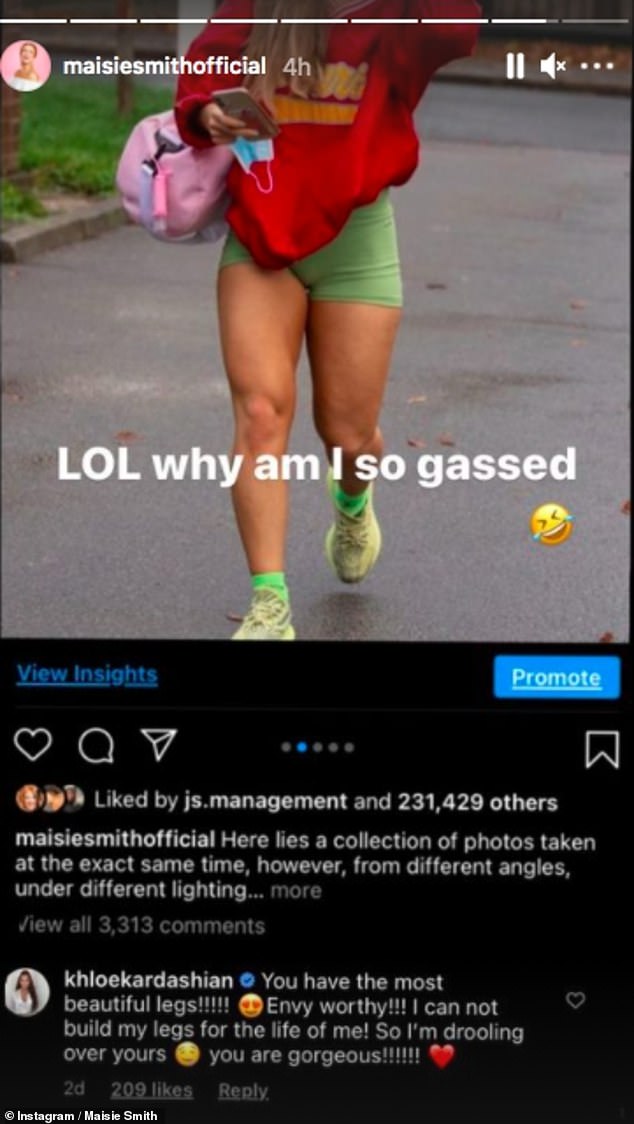 Loving it: The Strictly star also shared Khloe’s comment to her Instagram story saying ‘LOL why am I so gassed’

However Maisie was quick to respond to the unexpected reply, simply writing back to Khloe: ‘Thanks chicken x’

Maisie’s fans were equally taken aback with the lovely yet unexpected support from a reality TV icon, with one person writing: ‘Not the cross over I expected today’.

Last month Maisie, who is competing on Strictly alongside pro Gorka Marquez, revealed that her time on the dancefloor has taught her to learn to ‘love’ her ‘flaws’.

Taking to Instagram, the soap actress shared five photos taken from different angles of her leaving the gym in October and explained that she always worried about ‘cellulite’ on her legs. 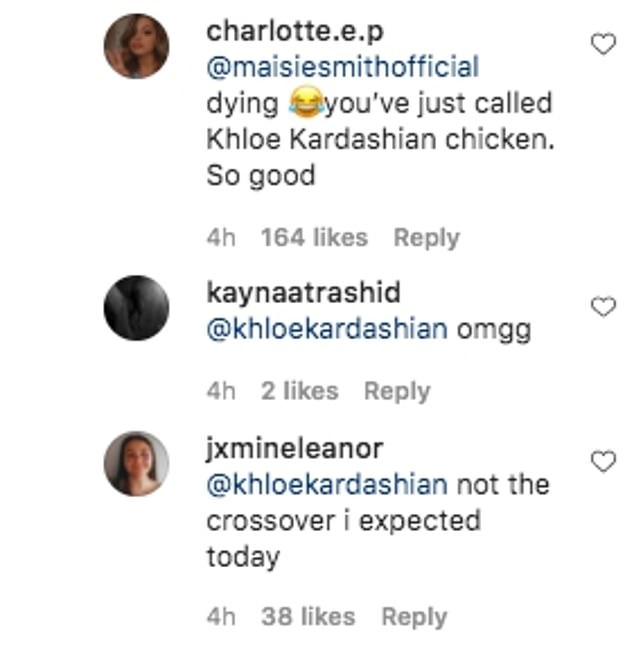 Reaction: Maisie’s fans were equally taken aback with the lovely yet unexpected support from a reality TV icon, with one person writing: ‘Not the cross over I expected today’ 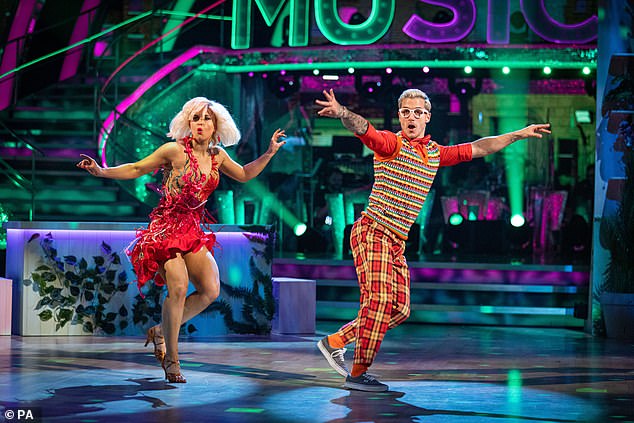 Full of energy: Maisie and her dance partner Gorka Marquez stormed the stage on Saturday with a very energetic performance of a jive to Little Shop Of Horrors, getting a 28 overall