Kim Kardashian, with some help from her children, opened up a slew of Valentine’s Day gifts from family and friends on Thursday evening.

But the 39-year-old could not help but ogle over one gift in particular given to her by sister Khloe Kardashian that featured wrapping paper sporting husband Kanye West’s iconic mug.

‘How cute is this wrapping paper,’ gushed Kim, as she continued to share more of the gifts she received from family and friends on her Instagram story. 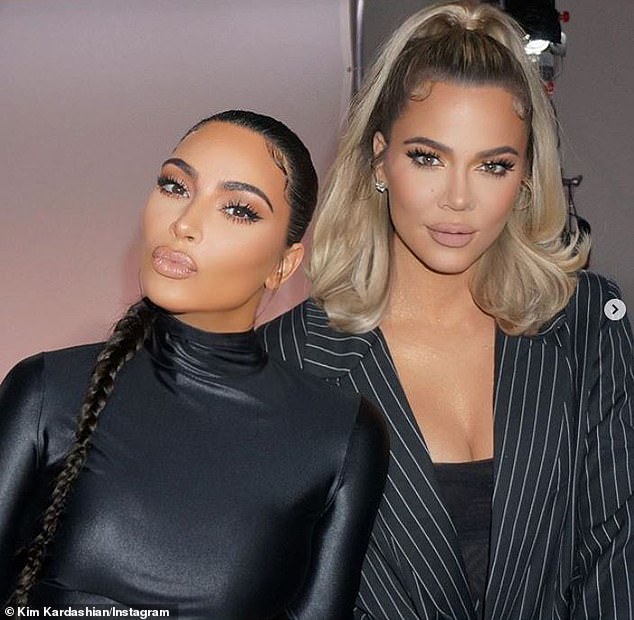 Thoughtful: Kim Kardashian took to her Instagram story on Thursday evening to share the gift her sister Khloe Kardashian gave her, which was covered in wrapping paper donning Kanye West’s face 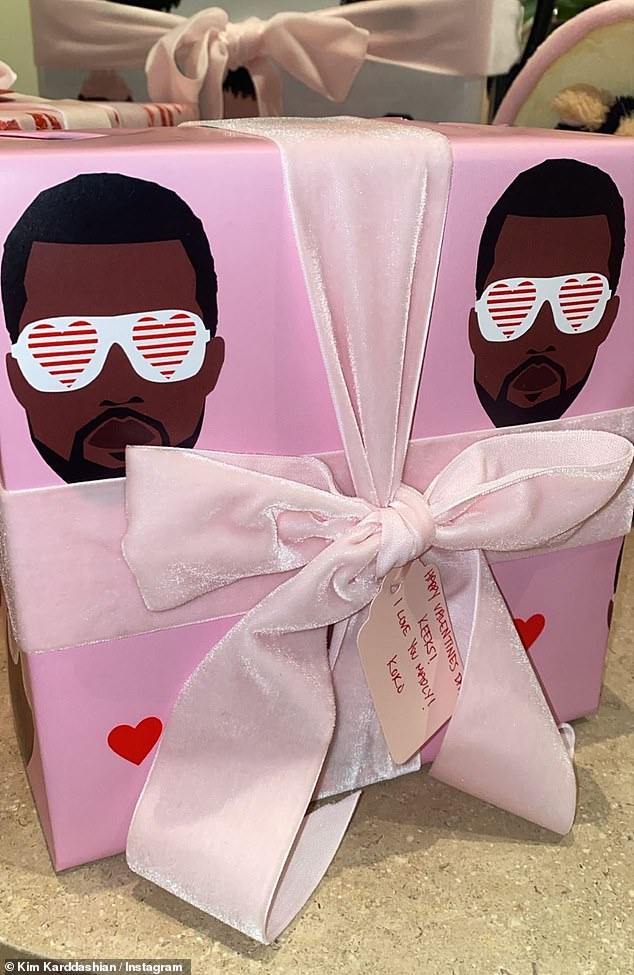 Kanye can ‘wrap’: Kim zoomed in on the aesthetically pleasing gift, which placed Kanye in a pair of white glasses featuring hearts over the eyes

There was a note attached to Khloe’s gift that read: ‘Happy Valentine’s Day, Keeks! I love you madly! Koko.’

The wrapping paper, topped with a light pink velvet bow, placed Kanye behind a pair of white blind style shades with hearts over the eyes.

Kanye’s face floated upon a pink backdrop among a slew of bright holiday-appropriate red hearts.

‘Thank you @khloekardashian,’ captioned Kim as she moved her camera over the rest of the gifts Khloe bestowed upon her and her family. 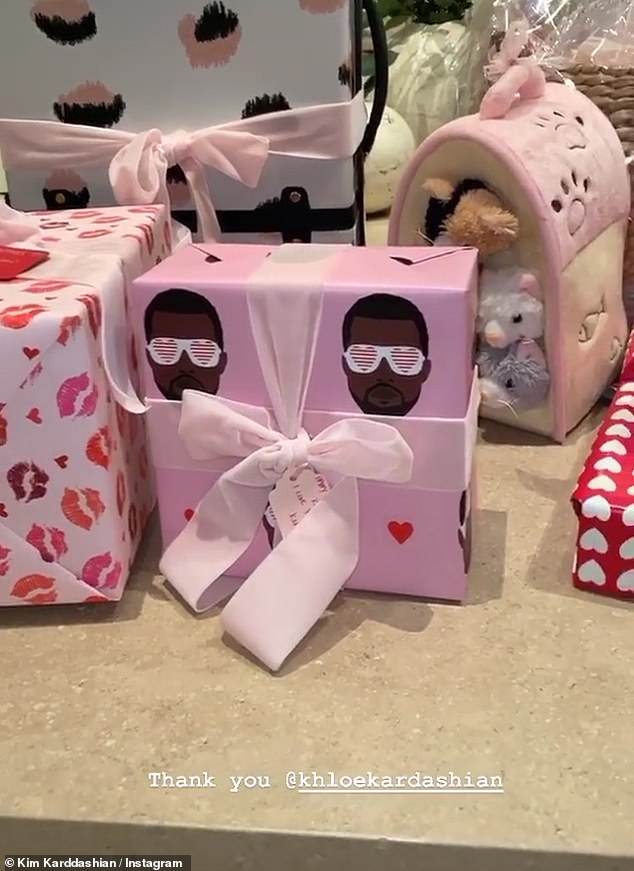 A special touch: ‘How cute is this wrapping paper,’ remarked Kardashian before moving onto the other gifts bestowed upon her and her family by Khloe on Thursday night 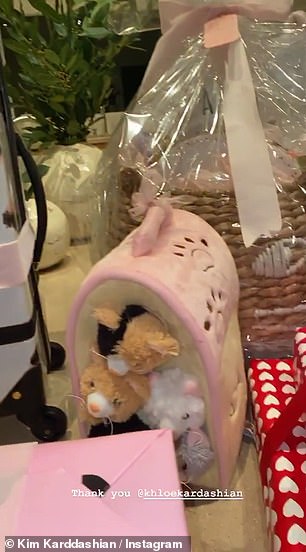 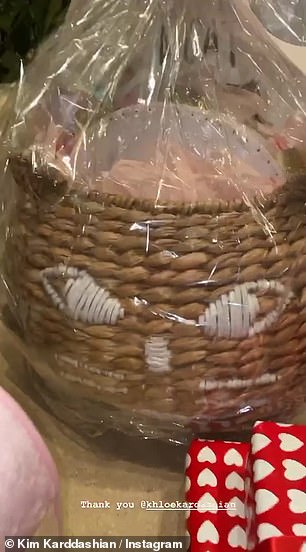 Aunty knows best! Among the gifts were hoards of cat themed merchandise, which Kim explained was for her daughter Chicago who ‘loves cats’ 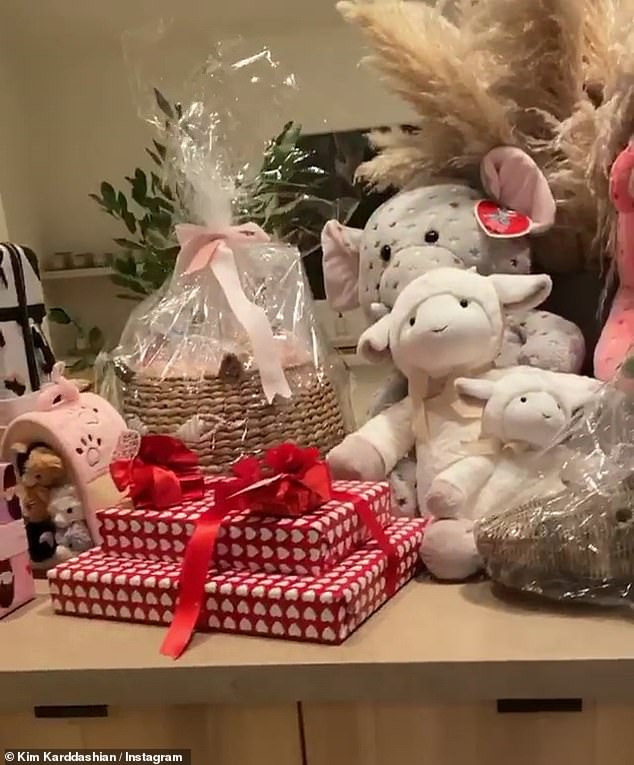 Generous: Khloe provided the family with an impressive array of gifts for the annual holiday 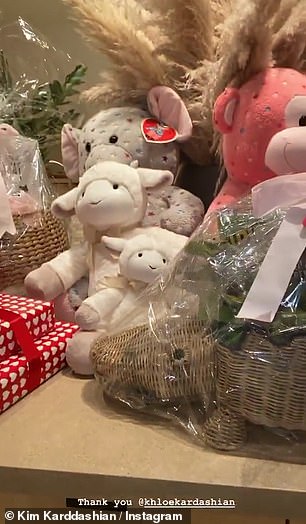 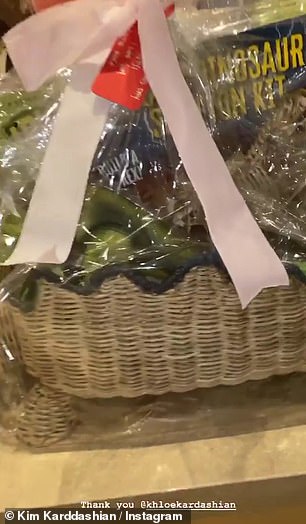 Dinos for days: A gift basket for Saint was put on display which featured a clear dinosaur theme

‘She got all this stuff…,’ narrated Kim as she panned over the large array of gifts.

A bunch of the personalized presents were cat themed, prompting Kim to explain that her youngest daughter Chicago, two, happen to ‘love cats.’

There was also a basket full of dinosaur merchandise that Kim said her son Saint, 4, was ‘going to love.’

‘They’re gonna love it all when they wake up in the morning and feel the love!,’ concluded Kim who was clearly taken aback by her sister’s generosity and thoughtfulness. 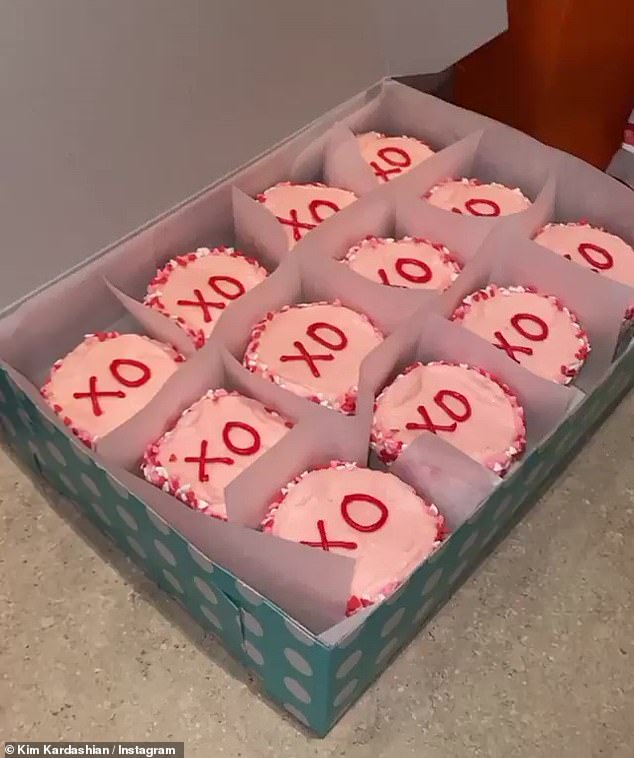 Yummy! Kris had Valentine’s day cupcakes delivered to Kim’s home for her and the family to share 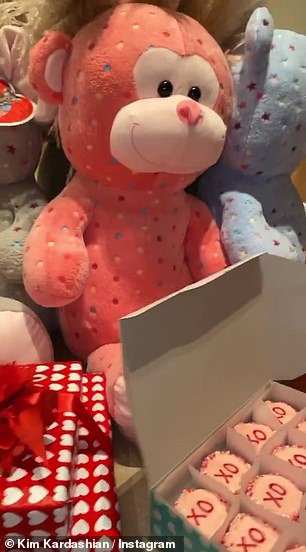 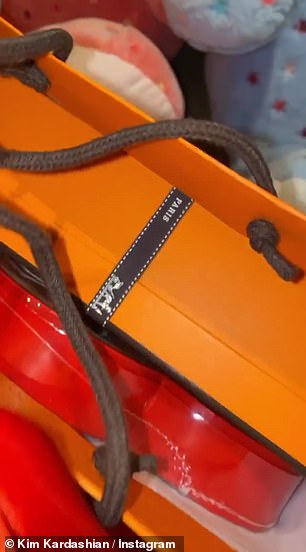 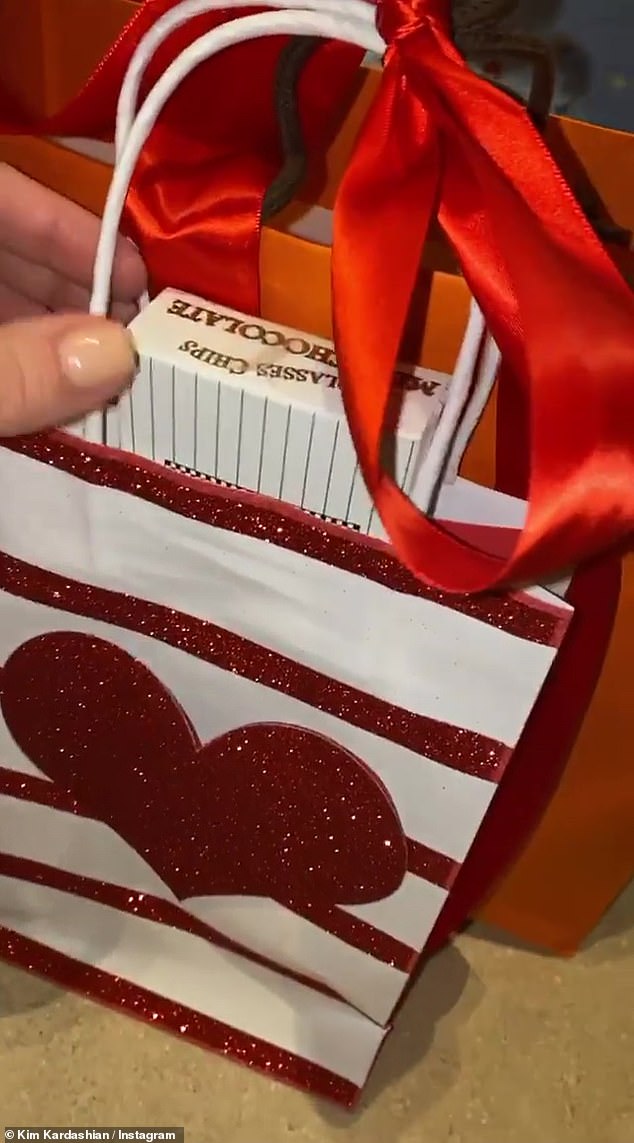 A personal favorite: Kris also picked out a type of Sees candy that Kim, as well as her late father Robert Kardashian, loved

Prior to the the Kanye wrapping paper, cats, and dinosaurs, Kim filmed the gifts she received from her mom Kris Jenner with two of her kids, Saint and Chicago, by her side.

‘My mom is the cutest! She gets gifts for all of my kids for Valentine’s Day,’ explained Kim, as an excited Saint began climbing onto the kitchen counter where the gifts resided.

‘And look what she got me!,’ exclaimed Kim as she pulled out a box of Molasses chips from Sees candy.

She remarked that the particular style of candy was her and her late father Robert Kardashian’s favorite to purchase when they would visit the iconic candy retailer. 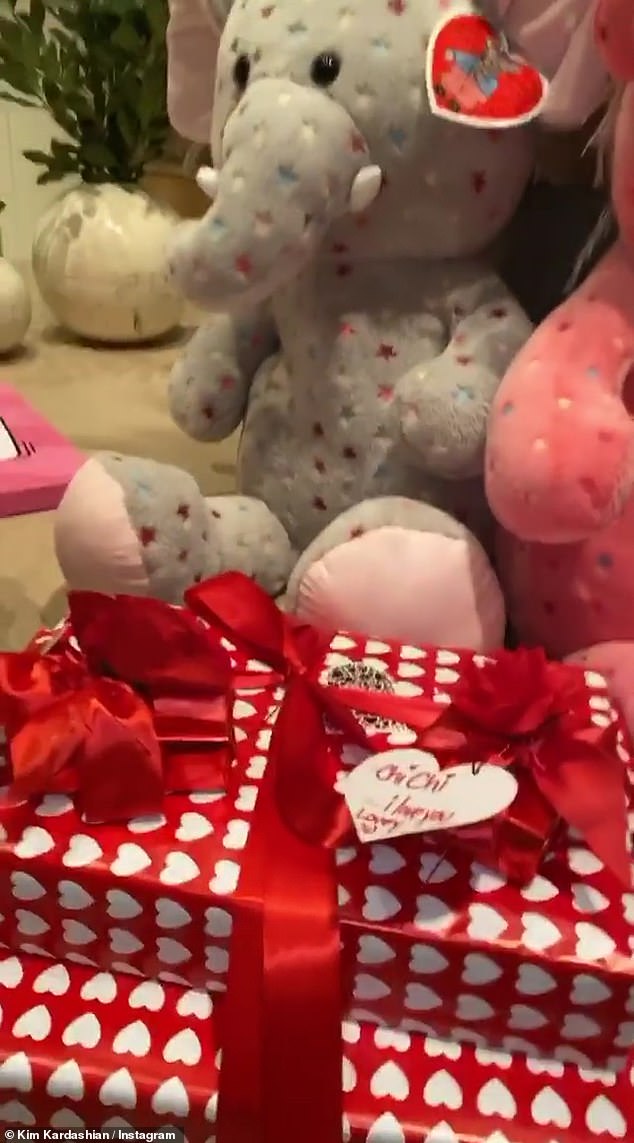 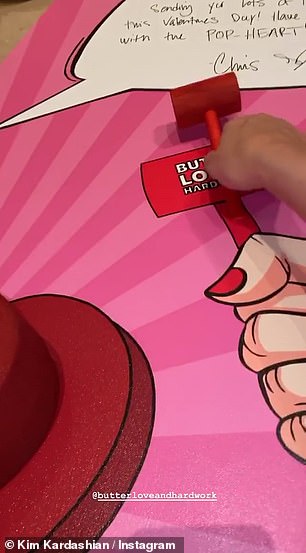 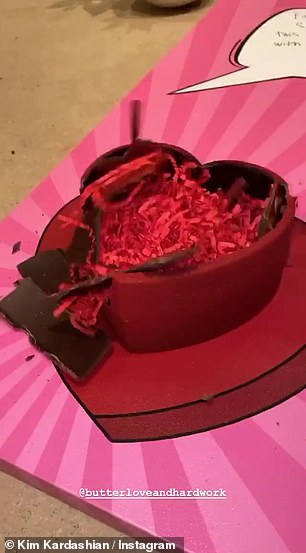 Smash it open! A gift from pastry chef Chris Ford required Kim to bust open the gift with a tiny red mallet

‘And she got me a little gift…,’ narrated Kim as she flashed over a bright orange bag stemming from the high fashion retailer Hermes.

Kim also shared a hilarious clip of her kids helping her bust open a gift from pastry chef and friend Chris Ford.

The unique gift required the opener to wield a hammer and smash open a heart shaped box filled with treats.

Saint and his little sister Chicago were more than happy to take on the task for their mom, as they fought over how many ‘turns’ they’d get each. 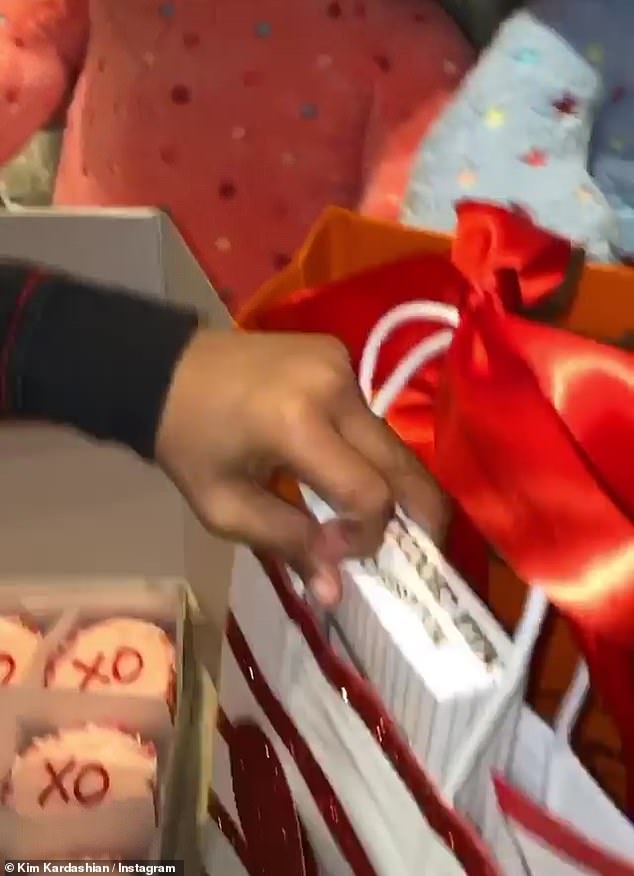 I want it! Kardashian’s son Saint admitted that he wanted the Sees candy his mom was gifted, even trying to snatch the box of milk chocolate goodness during his mom’s Instagram story 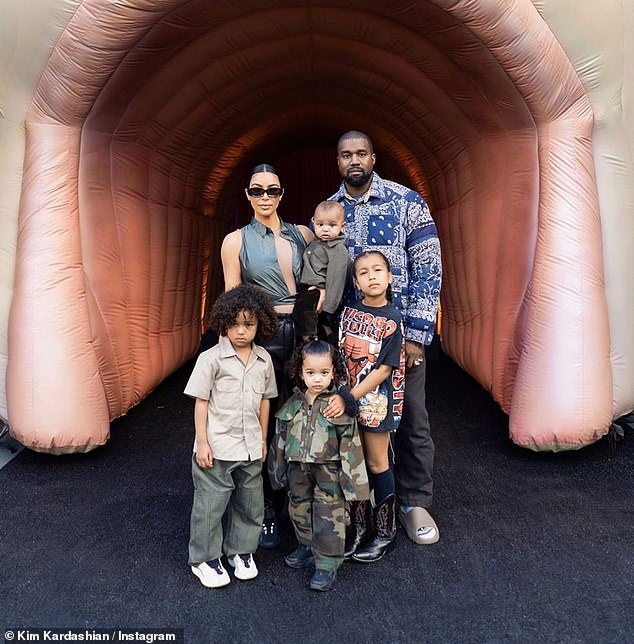