Larsa Pippen claims new beau Malik Beasley had been ‘separated’ from his now estranged wife Montana Yao when they met.

The 46-year-old former Kardashian pal tweeted, ‘Malik and his ex were separated before I ever met him that’s a fact,’ as she tried to clear the air surrounding the alleged affair with the 24-year-old Timberwolves player.

Beasley’s ex Yao – who filed for divorce upon seeing photos of the pair holding hands online – hit back at Pippen’s tweet on Sunday as she said, ‘receipts don’t lie,’ while calling her claims ‘100% false.’

Caught in the act: Larsa Pippen, 46, speaks out about her new relationship with 24-year-old NBA beau Malik Beasley as she claims he and his ex Montana Yao were ‘separated’ when they met as Yao says it’s a ‘lie’

Separated: The former Kardashian pal who is twice Beasley’s age tweeted that he and Yao were ‘separated before I ever met him’

Getting wind of Larsa’s tweet, Yao took to social media to slam her for her lies.

She wrote back to Pippen, ‘This is 100% false. Continue to speak on my name and my relationship and we’re going to have issues. Receipts don’t lie. Let’s not go there. I think you’ve embarrassed yourself enough already.’

Yao and the Beasley had been married for nine-months leading up to the divorce filing in early December.

Home with their 21-month-old son Makai, she had expected Beasley to return home for his birthday on November 26, though it was later revealed in photos that he spent it with Larsa in Miami. 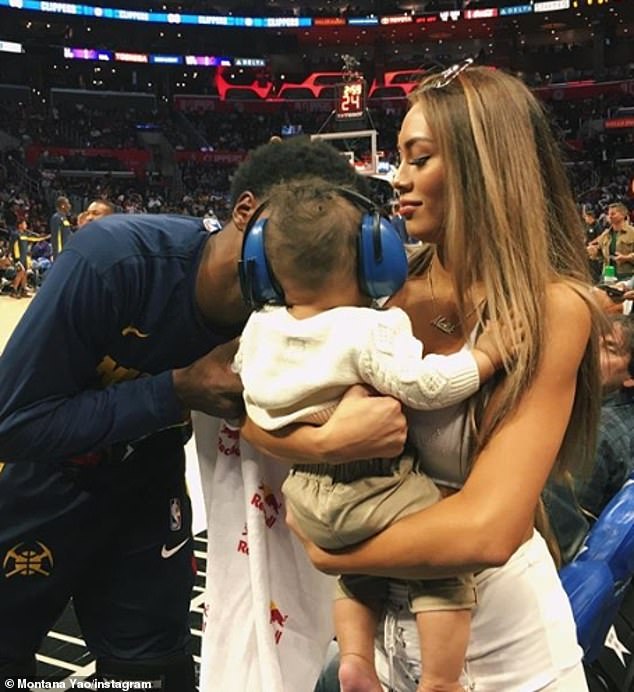 On the rocks: Yao and Beasley were married for nine months and share their son Makai as his affair tore their relationship apart

Got receipts: In Yao’s scathing tweet back to Larsa she accused her of lying as she said ‘receipts don’t lie’ before claiming Pippen looked like a sad joke

Before Pippen and Beasley were spotted at the mall he left a flirty post on her Instagram on October 23 as he wrote, ‘I just want to take you on a date and treat you like a queen.’

When they were seen a month later in the sunshine state it became apparent that they had made plans to meet up weeks in advance, with Yao being completely unaware.

After seeing the photos a blindsided Yao said on Instagram, ‘Wow…I don’t even know this man…this is wild y’all I’m seeing it for the first time just like y’all.’

On December 9 Montana got candid about the aftermath of the affair as she told her followers, ‘Things have been pretty rough I’m not going to lie. We were told to leave our family home 10 days ago and just like you all I’m pretty confused.’ 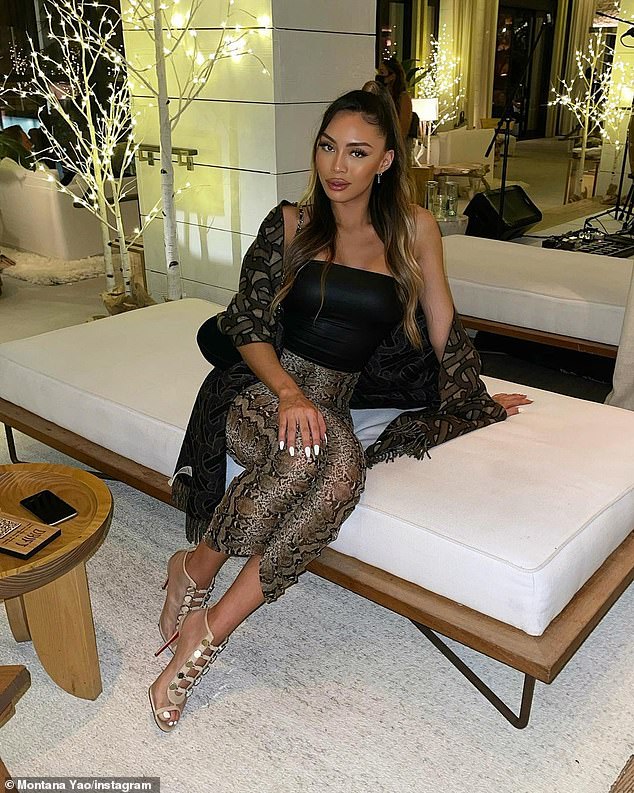 Uprooted: An emotional Yao shared that after filing she and Makai were ‘told to leave’ their home as she said she was ‘pretty confused’

She added, ‘There has been no private or public addressing of the situation nor any type of apology. I’m not the type to disclose too much information but I definitely will if or when I feel it is appropriate.’

Since filing, Beasley has made his affection for Pippen very clear as he commented on a photo of her that read ‘What makes you the happiest?,’ to which Beasley shamelessly commented ‘U’ with a red heart.

Frequently referencing her relationship on Instagram, Pippen recently said, ‘Sometimes you meet a person and you just click–you’re comfortable with them like you’ve known them your whole life, and you don’t have to pretend to be anyone of anything.’

The pair spent time together in his city of Minnesota as they posed for some snaps by a Christmas tree. 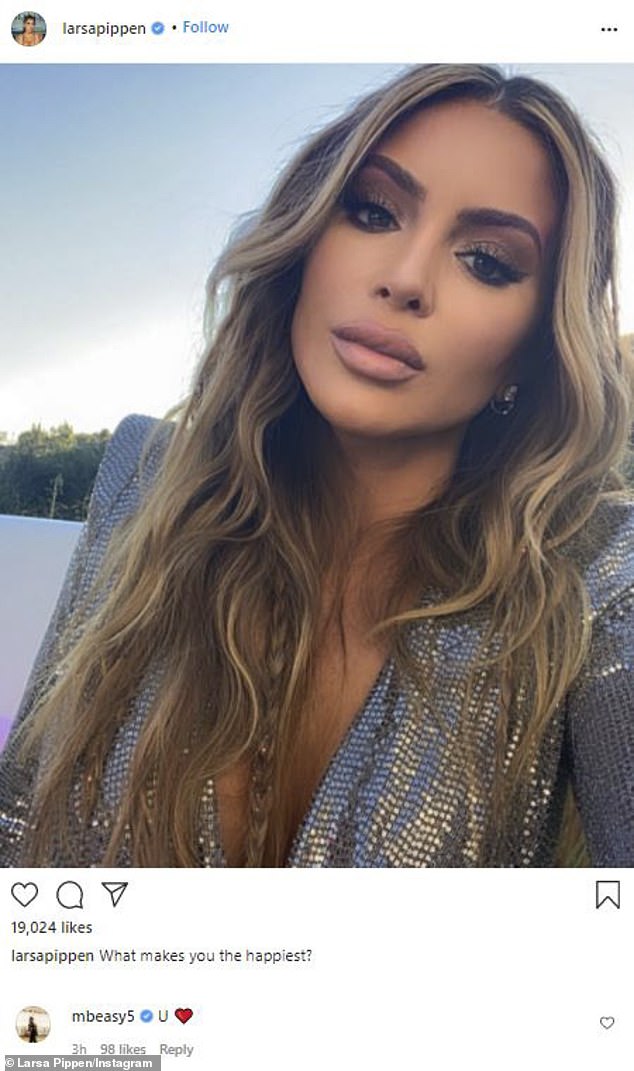 Flirty: On December 12 Beasley left a flirty comment on her Instagram as he said that she ‘makes him the happiest’

Vilified: The ex-wife of Scottie Pippen claimed that people were trying to paint an untrue picture of her

On Sunday morning, Pippen continued to try and clear her name of lies as she tweeted: ‘I’ve been separated going thru a divorce for over 2 years and I’ve been linked to a few guys my entire life so don’t sit here and paint a picture of me that isn’t true.’

The ex-wife of Scottie Pippen slammed what she dubbed ‘disgusting’ media stories, as she said people have been writing ‘weirdo s**t’ on her photos.

Beasley – who has since cleared his Instagram feed of all but four photos of himself – revealed on his Instastories late Saturday that he was in Larsa’s city of LA as his team faces off against the Lakers on Sunday.

Earlier this week he pleaded guilty to a felony charge of threats of violence surrounding a September incident and he faces 120 days in a workhouse. 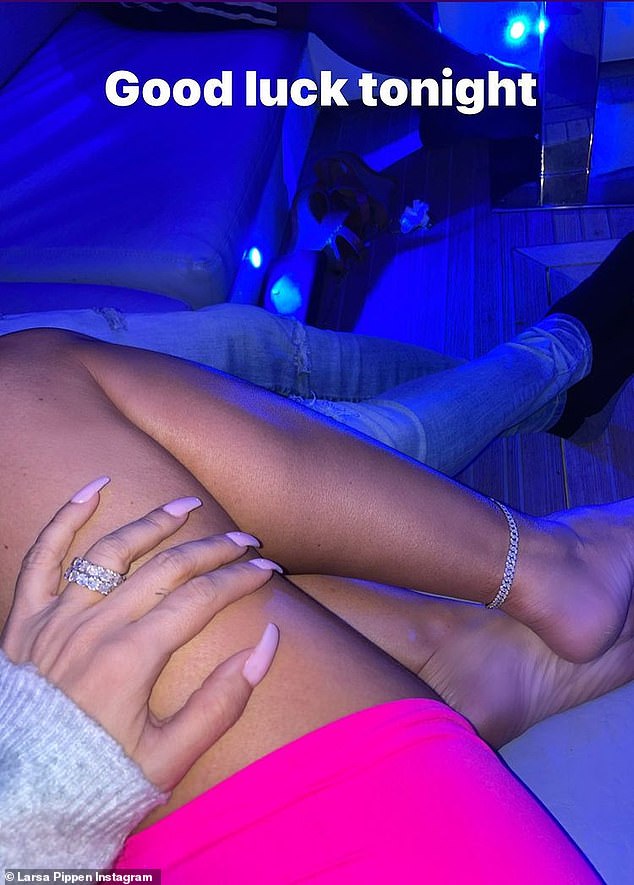 Cozied up: Last week she shared a photo of her legs next to Beasley’s as they spent some time together; December 21