Lin-Manuel Miranda responds to criticism over Hamilton and slavery

Lin-Manuel Miranda took to social media Monday to respond to critics calling for Hamilton to be canceled for its glorification of slave owners.

The 40-year-old playwright responded on Twitter in a thread debating critiques of the musical that debuted Friday on the Disney+ streaming service.

Tracy Clayton tweeted that Hamilton the play that debuted in Broadway in 2015 and the movie version ‘were given to us in two different worlds & our willingness to interrogate things in this way feels like a clear sign of change’. 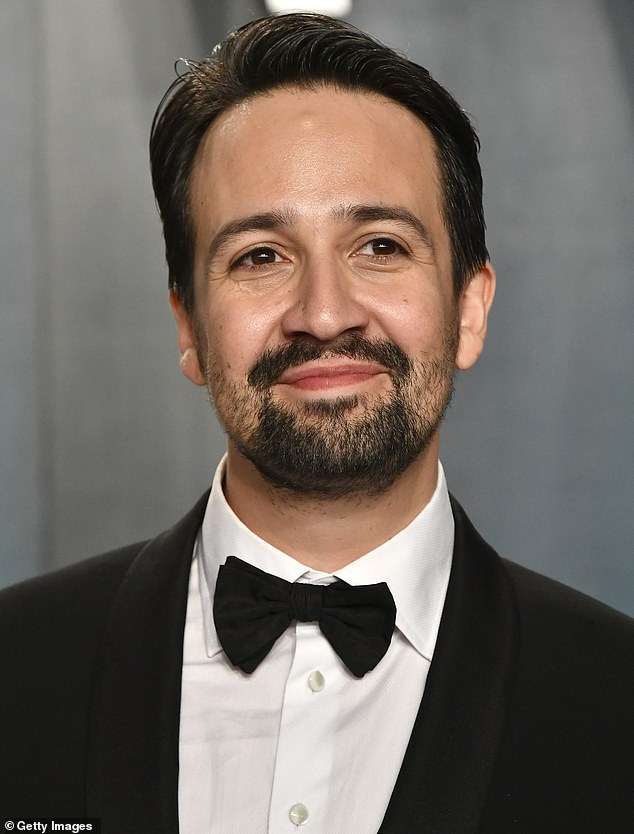 Online response: Lin-Manuel Miranda, shown in February in Beverly Hills, California took to social media Monday to respond to critics calling for Hamilton to be canceled for its glorification of slave owners

The host of the weekly Netflix podcast Strong Black Legends also posted that Hamilton is a ‘flawed play’ while additionally noting that it gave her ‘flawed and imperfect little life a big boost when i needed it most’.

Miranda took the criticism in stride.

‘Appreciate you so much, @brokeymcpoverty. All the criticisms are valid. The sheer tonnage of complexities & failings of these people I couldn’t get. Or wrestled with but cut. I took 6 years and fit as much as I could in a 2.5 hour musical. Did my best. It’s all fair game,’ he tweeted..

Hamilton was a US Founding Father and first Secretary of the Treasury who also promoted the abolition of the international slave trade in New York City. 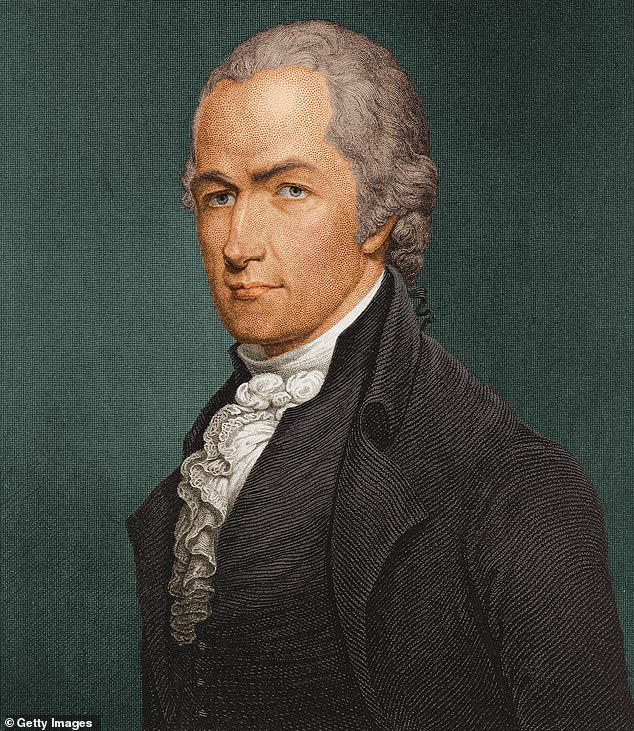 American statesman: Alexander Hamilton shown in a portrait circa 1790 was a Founding Father of the United States and the first Secretary of the Treasury 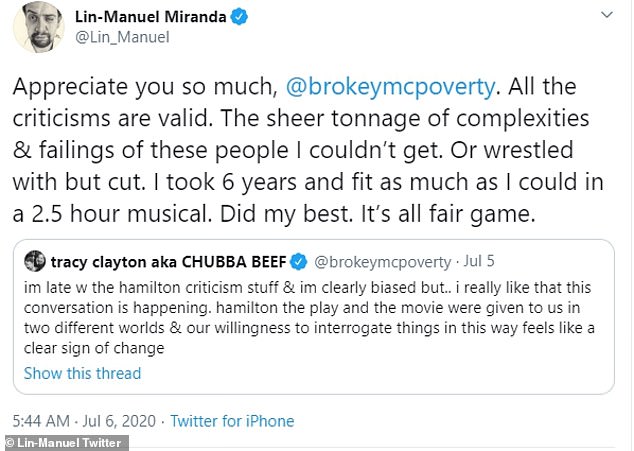 Fair game: Miranda tweeted that ‘All the criticism are valid’ and said it was ‘all fair game’

The musical and film version portray Hamilton as a ‘young, scrappy, and hungry’ immigrant and someone who was passionate about the abolition of slavery.

The production in light of recent Black Lives Matter protests has come under increased scrutiny with some pointing out that Hamilton was a slave trader.

The Founding Father married into a prominent New York slave-holding family, and managed the sale of slaves for his in-laws. He also did accounting for a Caribbean trading company that engaged in the slave trade. 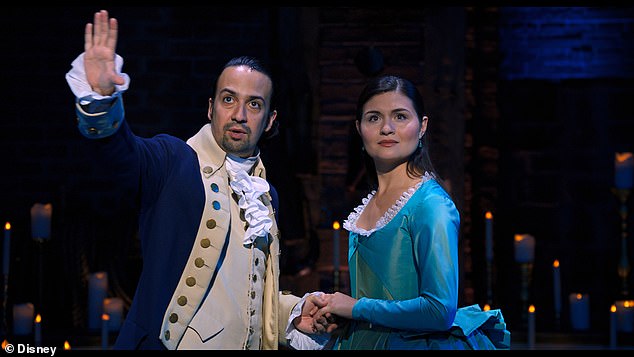 Hit play: Phillipa Soo is shown as Eliza Hamilton and Miranda as Alexander Hamilton in a still from the filmed version of the Broadway production of Hamilton that debuted Friday on Disney+

It does not appear, however, that Hamilton ever directly owned any slaves himself.

The Hamilton musical, which won 11 Tony Awards for its Broadway run and has grossed $1 billion worldwide, cast many non-white actors in roles as historical white figures.

The production mostly glossed over the issue of slavery, making few references about the profits that some Founding Fathers made from it. 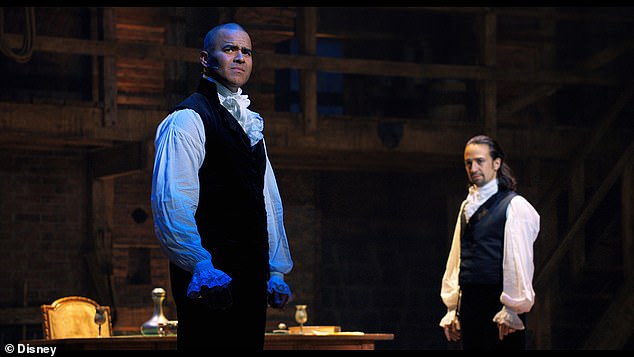 The true story behind the Hamilton show saw the hashtag ‘CancelHamilton’ grow on Twitter.

‘How is Hamilton not canceled? Alexander Hamilton owned and traded slaves. I think we need to cancel Hamilton,’ wrote one Twitter user.

‘Hamilton was a slave trader. Tear down the statues NOW and #CancelHamilton,’ added another.

There were other such calls though some were tongue-in-cheek responses to the emergence of ‘cancel culture’ on social media. 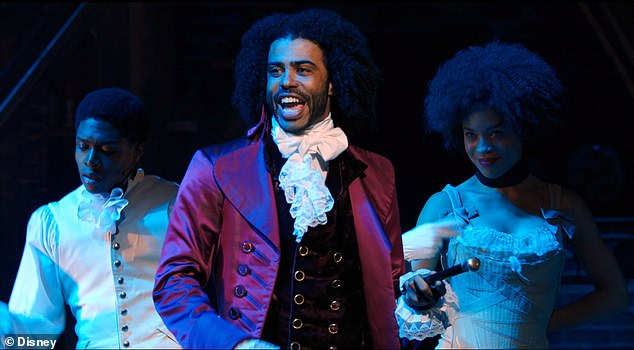 Slave owner: Daveed Diggs is shown portraying Thomas Jefferson, who owned more than 600 slaves, in a still from Hamilton on Disney+

Hamilton was a penniless orphan from the Caribbean who was so brilliant — and so good at self-promotion — that he rose through the ranks in the Revolutionary War to become George Washington’s right-hand man.

In 1780, he married Elizabeth Schuyler, the daughter of a wealthy and influential New York landowner and military officer. The couple went on to have eight children. She was a source of loyalty and stability over the years.

Although it does not appear that Hamilton ever directly owned any slaves himself, he did marry into a prominent New York slaveholding family, and managed slave sales for his wife’s family.

It’s believed the Schuyler family owned between between 8 and 13 slaves at their Albany, New York estate over the years with a further 15 at the Saratoga, New York home.

The slaves consisted of a handful of men, several women and their children.

The male slaves would moving materials between the Schuyler’s properties while the women carried out household chores including cooking, washing, and looking after the children.

Born and raised in the West Indies, Hamilton was orphaned in his early teens. Taken in as an apprentice to an international shipping company based on his home island, his talents were recognized by local benefactors who created a fund to provide him with a formal education.

Hamilton came to New York in 1772 at age 17 to study at King’s College (now Columbia University).

While he lived in the city he was exposed to American Patriots became a supporter of their cause. As a student, he wrote defenses of the revolutionary cause and published in local newspapers.

Soon afterwards, Hamilton was commissioned as a Captain of Artillery at the beginning of the Revolutionary War; and later his abilities were again recognized and he was invited to become an aide-de-camp to General George Washington.

After the war, as a member of Congress, Hamilton was instrumental in creating the new Constitution. As co-author of the Federalist Papers, he was indispensable in the effort to get the Constitution adopted.

As the first U.S. Treasury Secretary (1789-95), Hamilton created a modern financial system, funded the national debt, founded a bank and established a mint with the dollar as currency.

He defended the Constitution in the Federalist Papers, a series of 85 essays. They would become his best-known writings.

Hamilton also founded the New York Post, and was even involved in a sex scandal, the Reynolds Affair.

In the infamous ‘Reynolds Pamphlet,’ published in 1797, Hamilton went public about an affair with a married woman, Maria Reynolds.

He did so in order to clear his name from any suspicion of illegal financial speculation involving her husband, James.

It was America’s first prominent sex scandal and ultimately dashed any hopes of achieving higher office.

Hamilton also had a lifelong rivalry with Aaron Burr, the vice president under Thomas Jefferson. Hamilton and  Burr had been political opponents since the debate over the Constitution in 1789.

Burr claimed Hamilton insulted him and in July 1804 challenged him to a duel. Each man fired one shot; Hamilton missed, and was killed.