‘They’re raring to go’: Little Mix ‘vow to continue as a trio with a new single set for release and plans for another series of The Search’ after Jesy Nelson left the band

Little Mix have reportedly vowed to continue as a trio and have already made plans for the future after Jesy Nelson announced she had left the band on Monday.

The singer, 29, revealed her decision on Instagram saying the ‘constant pressure’ of being in the band over the last nine years has taken a toll on her mental health.

Fans had worried that her departure would mean the end for the band, however a source has now claimed that remaining members Perrie Edwards, Leigh-Anne Pinnock and Jade Thirlwall have already got a single ready to go as a three-piece. 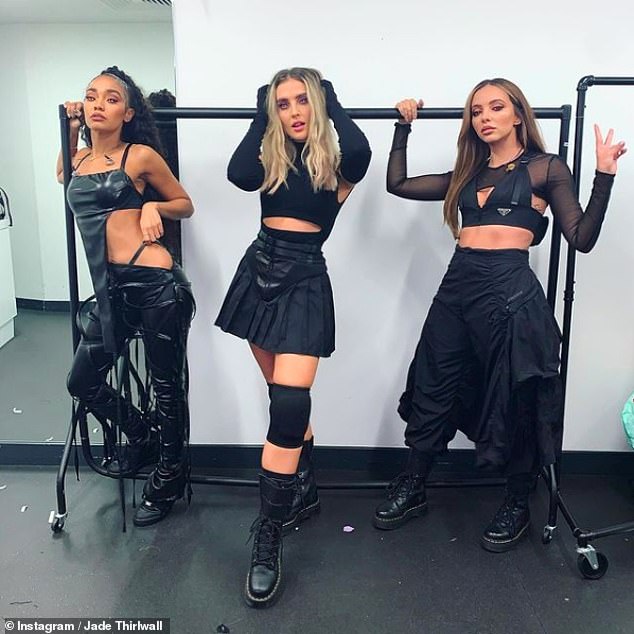 Carrying on: Little Mix have reportedly vowed to keep singing as a trio and have already made plans for the future after Jesy Nelson announced she had left the band on Monday

A source told The Sun: ‘The tour [Confetti] could have just been cancelled if Perrie, Leigh-Anne and Jade didn’t want to carry on, but they adore Little Mix and all decided they don’t want this to be the end.

‘There is a new single featuring the three of them ready to go early next year, as well as other tracks, and there could even be a seventh album before 2021 is over.

‘2021 marks a decade of Little Mix and the girls are raring to go for another ten years.’

They added that the girl group are in ‘advanced talks’ about filming a second series of their hit singing talent show The Search.

MailOnline has contacted a representative for Little Mix to ask for a comment. 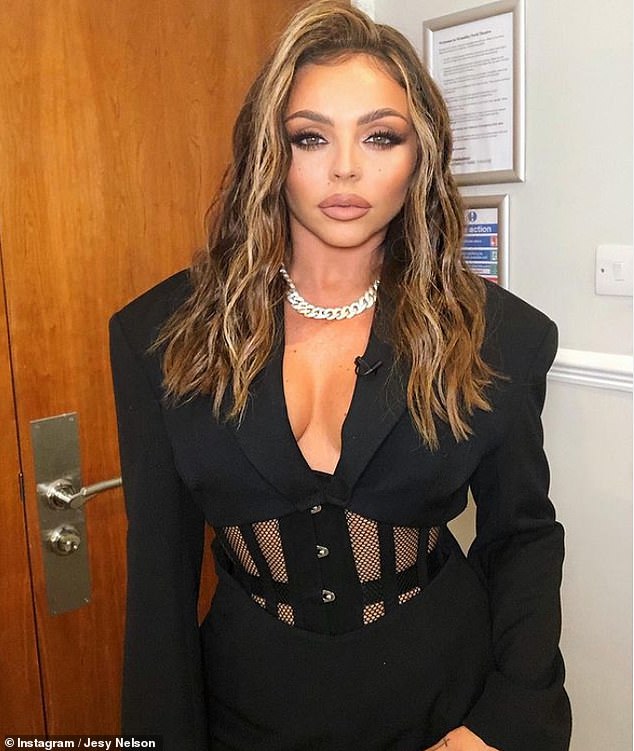 Over: The singer, 29, revealed her decision on Instagram saying the ‘constant pressure’ of being in the band over the last nine years has taken a toll on her mental health

After Jesy revealed she had left the band, Perrie, 27, Jade, 27, and Leigh-Anne, 29, admitted it was an ‘incredibly sad time’ but they ‘fully support’ her decision.

Little Mix also confirmed that they would be remaining as a trio, saying that they are ‘not ready for it to be over’.

They penned on both Instagram and Twitter: ‘After an amazing 9 years together Jesy has made the decision to leave Little Mix. This is an incredibly sad time for all of us but we are fully supportive of Jesy.

‘We love her very much and agree that it is so important that she does what is right for her mental health and well-being.

‘We are still very much enjoying our Little Mix journey and the 3 of us are not ready for it to be over. We know that Jesy leaving the group is going to be really upsetting news for our fans. 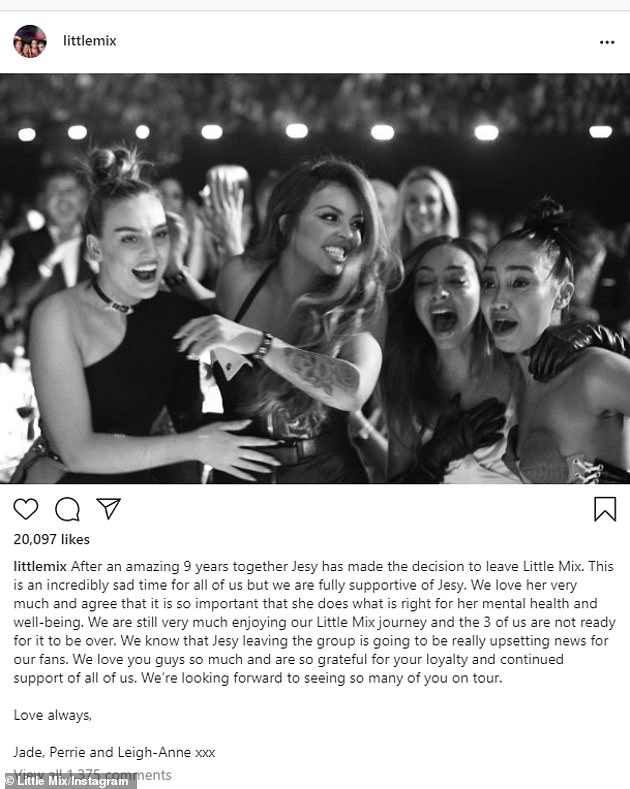 Support: The remaining three singers are thought to have already got a single ready for release and making plans for a second series of The Search (pictured their supportive post after Jesy announced she had left the group)

‘We love you guys so much and are so grateful for your loyalty and continued support of all of us. We’re looking forward to seeing so many of you on tour.’

Jesy detailed her reasons for leaving the group in an emotional statement shared to Instagram on Monday night.

She penned: ‘To all my Mixers, the past nine years in Little Mix has been the most incredible time of my life. We have achieved things I never thought possible. From winning our first Brit Award to our sold out shows at the O2.

‘Making friends and fans all over the world I can’t thank you all enough from the bottom of my heart for making me feel like the luckiest girl in the world. You have always been there to support and encourage me and I will never ever forget it. 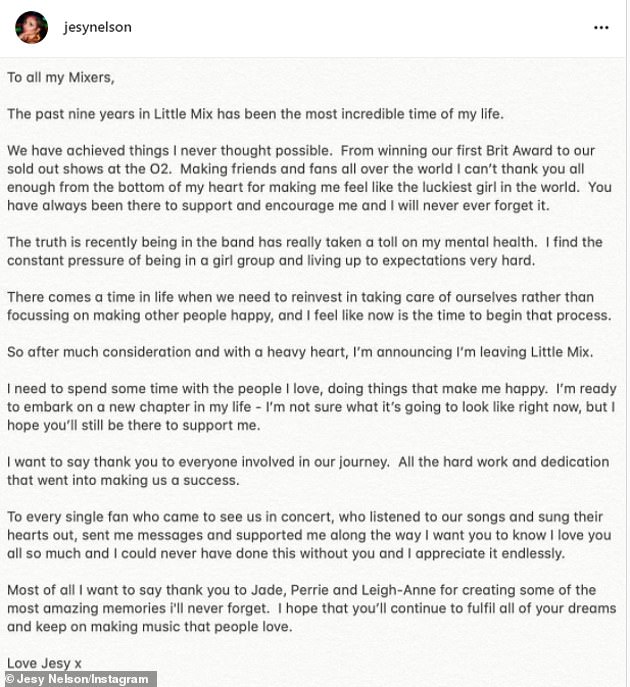 Emotional: Jesy shared a heartfelt statement on Monday where she announced her departure and revealed she wants to focus on things that make her ‘happy’ 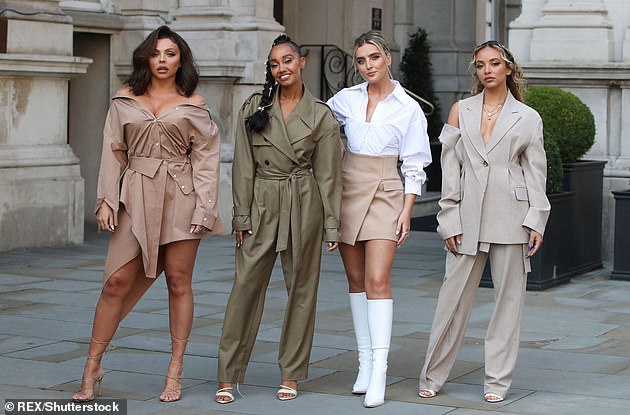 ‘Very hard’: Jesy also emotionally said that being in the band had ‘taken a toll on her mental health’ and that she finds the ‘constant pressure very hard’ (pictured with bandmates Leigh-Anne Pinnock, Perrie Edwards and Jade Thirlwall L-R in September)

‘The truth is recently being in the band has really taken a toll on my mental health. I find the constant pressure of being in a girl group and living up to expectations very hard.

‘There comes a time in life when we need to reinvest in taking care of ourselves rather than focusing on making other people happy, and I feel like now is the time to begin that process.

‘So after much consideration and with a heavy heart, I’m announcing I’m leaving Little Mix.’

Jesy emotionally added: ‘I need to spend some time with the people I love, doing things that make me happy. I’m ready to embark on a new chapter in my life – I’m not sure what it’s going to look like right now, but I hope you’ll still be there to support.

Little Mix were crowned the winners of The X Factor in 2011 when they become the first band to ever win the show in its history.

The band has since gone on to become one of the biggest ever girl group’s in the UK, scoring number one hits including Wings, Black Magic and Shout Out To My Ex.

They were signed to Simon Cowell’s record label Syco until November 2018 when they switched to rival label RCA.

Little Mix won two BRIT Awards for their 2017 hit Shout Out to My Ex and their 2019 single Woman Like Me featuring Nicki Minaj. 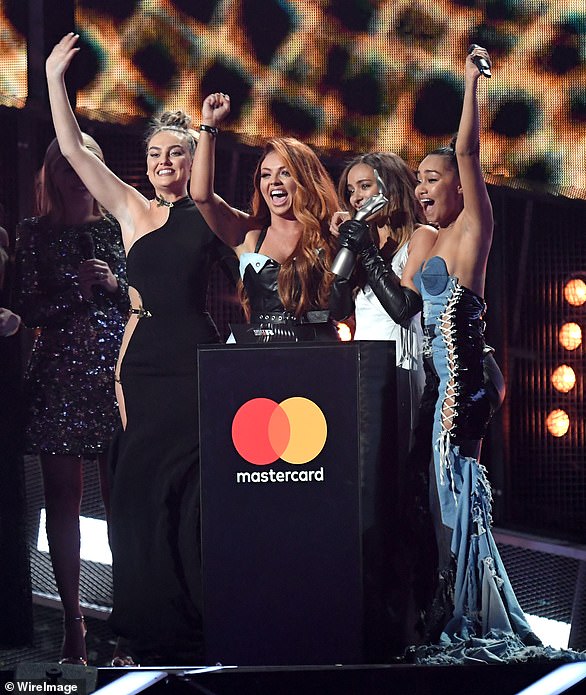 Winners! Little Mix won two BRIT Awards for their 2017 hit Shout Out to My Ex (pictured) and their 2019 single Woman Like Me featuring Nicki Minaj

The band had a total of six successful tours, they were due to be touring this year for their Summer 2020 Tour but it was cancelled due to the coronavirus crisis.

Only recently, the band had great success with both their brand new album Confetti as well as their talent show Little Mix: The Search.

The album reached Number 1 on the Official Irish Albums Chart while it peaked at Number 2 in the UK.

Little Mix are slated to head on tour in April next year with their new album Confetti, but it is currently unclear whether dates may be delayed due to the Covid-19 crisis. 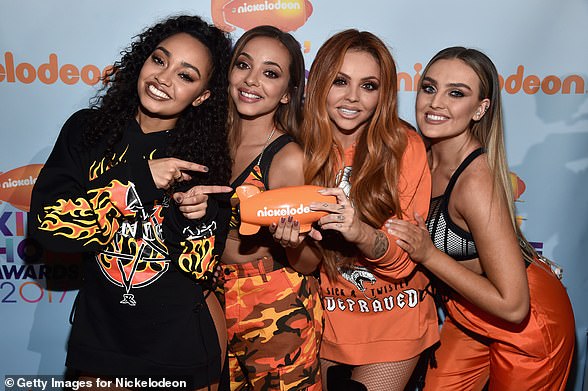 ‘I want to say thank you to everyone involved in our journey. All the hard work and dedication that went into making us a success.

‘To every single fan who came to see us in concert, who listened to our songs and sung their hearts out, sent me messages and supported me along the way I want you to know I love you all so much and I could never have done this without you and I appreciate it endlessly.

‘Most of all I want to say thank you to Jade, Perrie and Leigh-Anne for creating some of the most amazing memories I’ll never forget. I hope that you’ll continue to fulfil all of your dreams and keep on making music that people love. Love Jesy x.’

Fans were left devastated over the news as they sent their best wishes to both Jesy and the band in emotional messages. 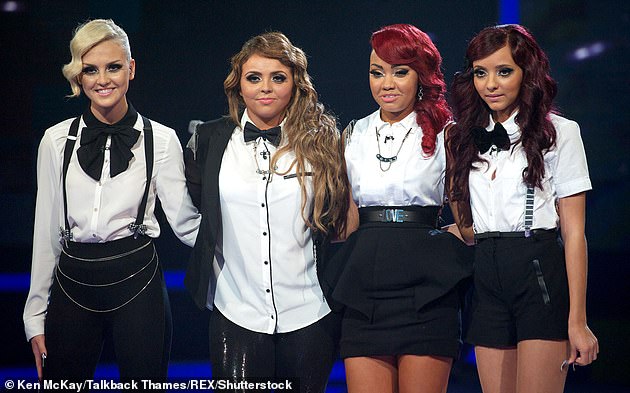 Way back when: Little Mix were crowned the winners of The X Factor in 2011 when they become the first band to ever win the show in its history (pictured)

While several celebrities, such as Dermot O’Leary and Frankie Bridge, reached out on the post to support Jesy as they praised the star for her ‘brave’ decision.

Jesy’s ex-boyfriend Chris Hughes also showed his support and he commented under her post with ‘the best’ along with a love heart emoji.

One person said: ‘I’m in tears rn… But I wish the best for jesy and the girls… No words can express the pain I’m feeling right now… I’m devastated.’

Sam, whose working relationship with Little Mix began shortly after their X Factor win in 2011, is still followed by the remaining members – and in turn still follows Jesy’s Instagram account. 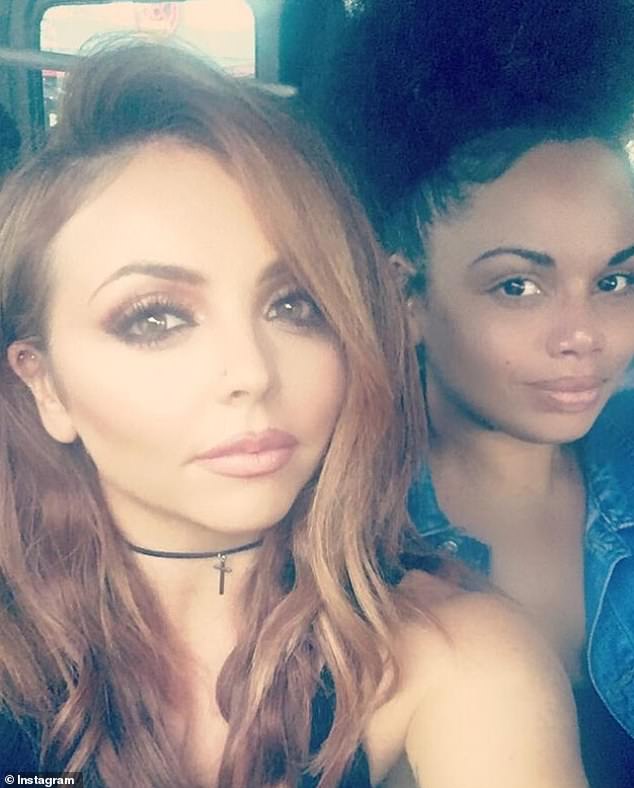 Manager: Hours after revealing she had left the chart-topping group after 9 years on Monday, fans noticed Jesy had unfollowed Little Mix’s manager, Samantha Cox, on Instagram (pictured together)