MissPap as announced that Love Island’s Amber Gill is the new face of the relaunch for the brand as part of an exciting £1M deal.

While fans have been waiting in anticipation for the Love Island queen to announce her plans for a fashion-focused collaboration, the brand has been working behind the scenes with Amber on the six-month deal which will kick off with the launch of the reality star’s first ever-clothing collection due to launch in October.

This follows Amber hitting back at a fan who accused her of being less successful than the other Love Islanders – despite her winning the show. 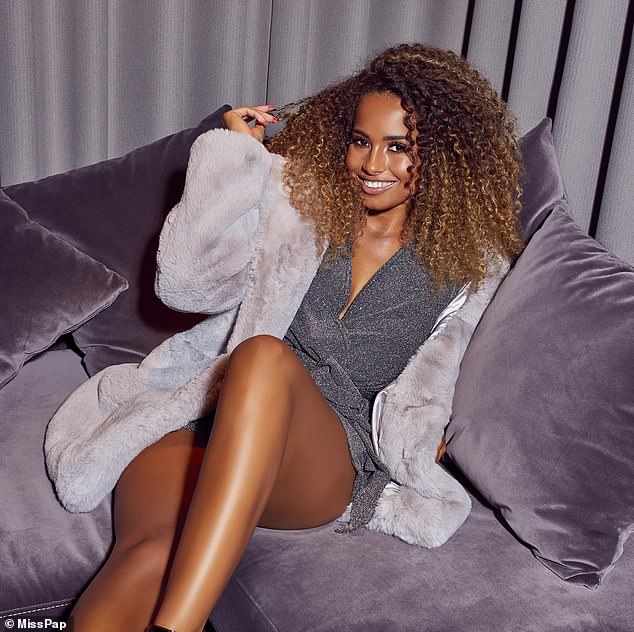 New venture: MissPap as announced that Love Island’s Amber Gill is the new face of the relaunch for the brand as part of an exciting £1M deal

Taking to Twitter, the fan wrote: ‘Maura joining boohoo, Ovie joining ASOS and Molly Mae having her own collection with PLT. What is Amber doing please?’

Taking no prisoners, Amber, 22, wrote back: ‘Sis please don’t tell me you think I’m out here doing nothing? I always do the most Be patient!’

The collab also comes just a week after it was announced Amber and Love Island co-champ Greg O’Shea have split up.

Amber said of the collab: ‘I am so happy to be joining the new MissPap family and to be a part of the fresh MissPap brand. 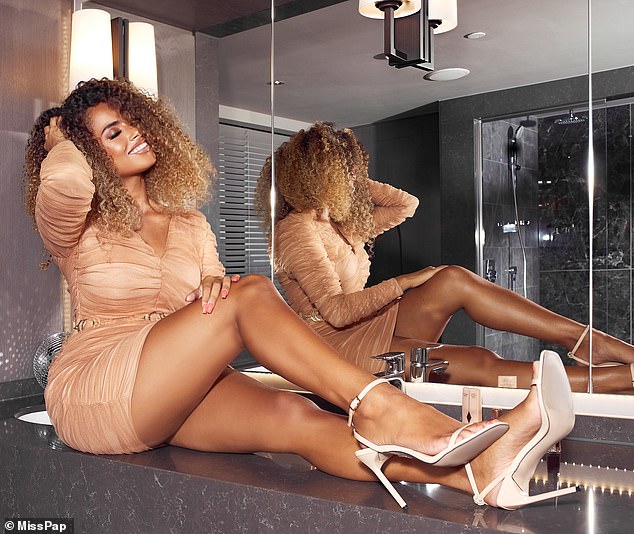 Onwards and upwards: This comes just a week after it was announced Amber and Love Island co-champ Greg O’Shea have split up 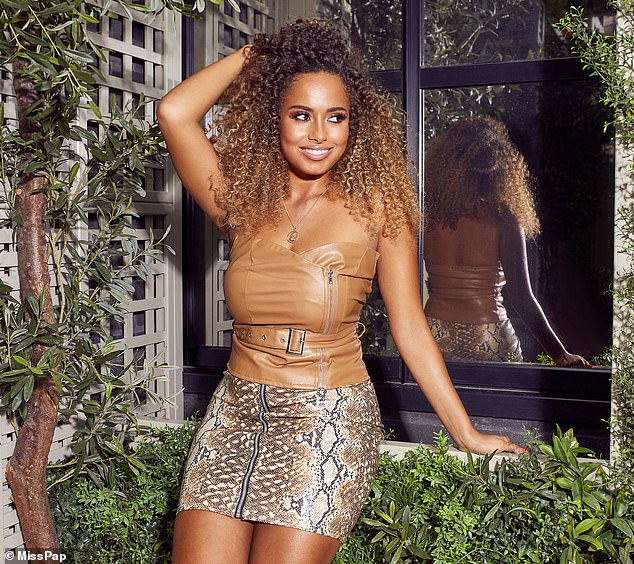 Amber Gill said of the collab: ‘I am so happy to be joining the new MissPap family and to be a part of the fresh MissPap brand’

‘Since leaving Love Island everyone has been waiting for me to announce my clothing collection but I wanted to take my time in the design process to make sure everything is perfect for girls of all shapes and sizes, but also ensure it embodies my fashion sense, fun, sexy and easy.

‘My collections will feature a range of going out, gym and lounge wear mixed with essential day time bits too.’

The first full Amber x MissPap collection is set to go live in October and will be an all-inclusive range offering sizes from 6-26.

With something for everyone, the collection will include fabrics that shimmer & drape, with exaggerated sleeves, ruches and plunge necklines. 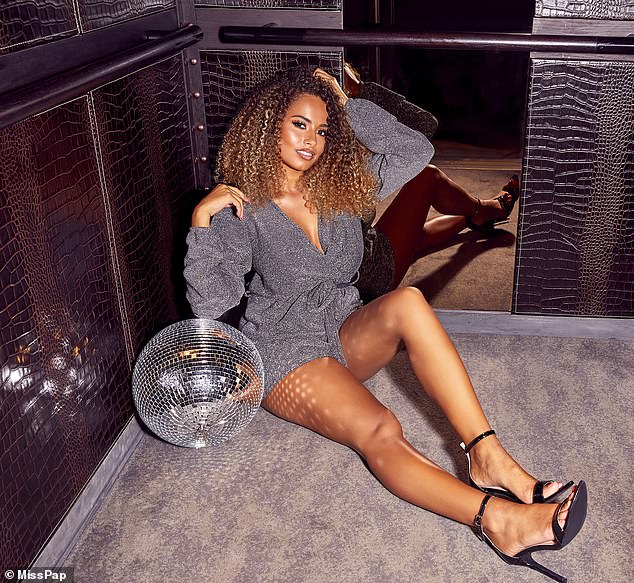 Diverse: The first full Amber x MissPap collection is set to go live in October and will be an all-inclusive range offering sizes from 6-26

Featuring body con silhouettes & figure flattering shapes, the collection adds a touch of class to the ultimate night out wardrobe with a tonal colour palette of champagnes and nudes, high-lighted with this season’s statement neon pink.

Referring to the insinuation that she wasn’t doing much since her Love Island victory, Amber retweeted the comment of one of her more positive fans.

They had penned: ‘People loved Amber on #LoveIsland because she spoke her mind, stood up for herself, didn’t play by anybody’s rules & was always her own person.

‘Now that she’s out of the villa those same fans are harassing her cause she isn’t following the playbook of all the other Islanders???’ 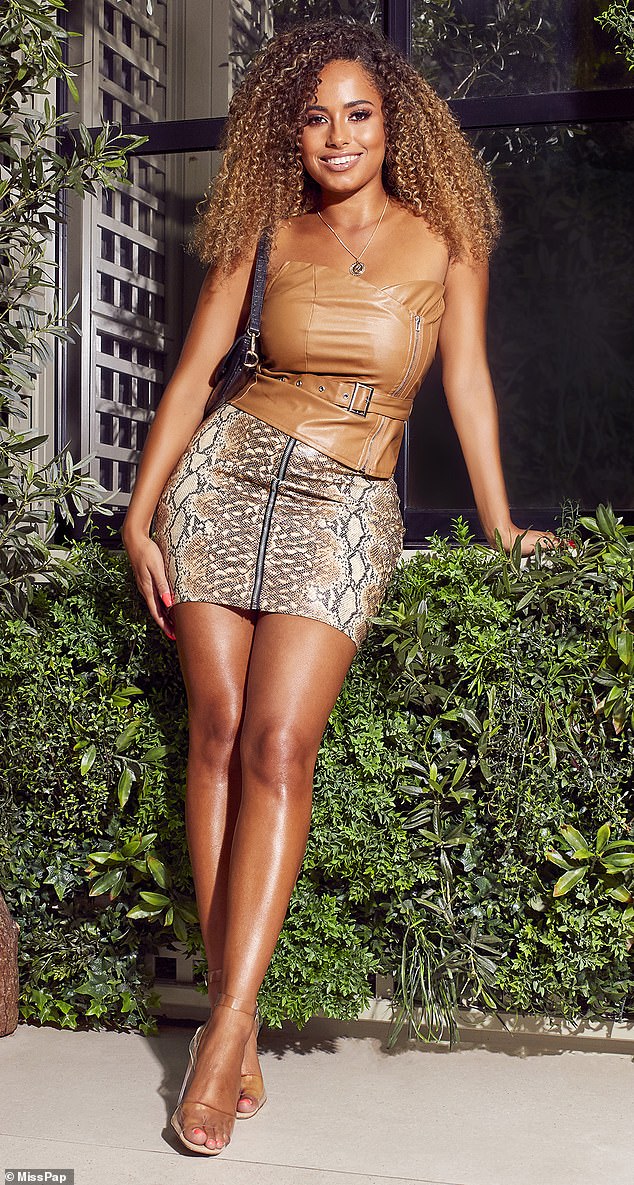 She added: ‘My collections will feature a range of going out, gym and lounge wear mixed with essential day time bits too’

The latest words come after Amber’s rumoured appearance on the forthcoming series of Dancing on Ice was said to be cancelled, with show bosses opting to sign Maura Higgins instead.

The Tyneside beautician was thought to be confirmed for the popular talent show, which sees a group of hapless celebrities with little or no skating ability perform complex dance routines on the ice each week.

But ITV bosses have reportedly been swayed by fiery Maura following her string of competent appearances on daily chat show This Morning, where she features as a resident agony aunt. 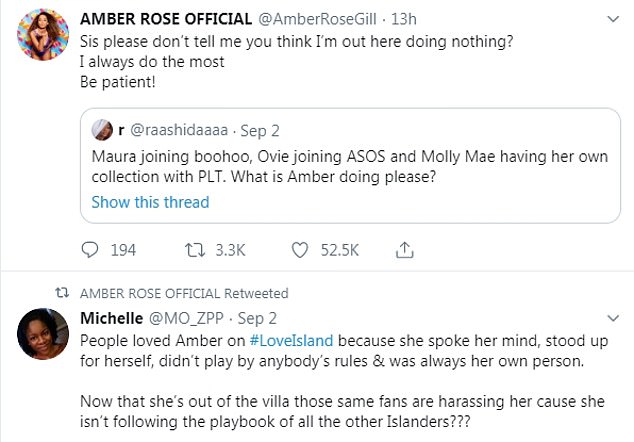 No holding back: Amber certainly had something to say when it came to defending herself

It’s understood that the straight-talking Irish grid girl was one of ‘several’ Love Island stars considered by producers before they made their final decision.

A source told The Sun: ‘Dancing On Ice producers were always going to sign a Love Island star for next year’s series and they wanted a girl this time after having two guys in the past.

‘It was looking hopeful for Amber but Maura pipped her to the post with her sense of humour and personality.’

An insider from the show told MailOnline: ‘At no point has Amber been booked or replaced on Dancing on Ice.’

Not happening: Love Island winner Amber’s rumoured appearance on Dancing On Ice is said to be cancelled, with show bosses opting to sign Maura Higgins instead

Amber broke her silence on her shock split from Greg on Monday’s Loose Women, admitting she was ‘really disappointed’ by the hunk and hoped the couple would find a way to make their long-distance relationship work.

She told the panel: ‘Obviously I’m really disappointed – I wasn’t expecting it all.

‘I was due – just this weekend gone – to fly out to Dublin to spend some time with him and we were going on a TV show together. I had to cancel because it was, like, it wasn’t working out.

‘I think our careers and the distance thing were always factors, it was something we always knew about so I don’t know what changed. I kind of wanted to make it work but it is what it is really.

‘I am disappointed that it’s over but you know I’m busy and I’ll be fine, onward and upwards from here.’ 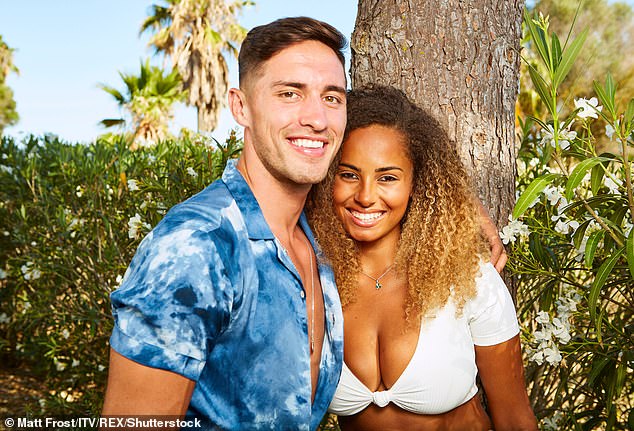 Greg lives in Ireland, while Amber originally hails from Newcastle and is currently spending a lot of time in London.

Since the split emerged on Friday, Greg has insisted the decision was mutual, and claimed he didn’t ‘dump’ her via text message.

To which Amber said: ‘From my point of view I still wanted to make it work. There was a call a few days before just chatting, not specifically to do with that and then definitely on that day it was a text.

‘That’s just it… I did a little bit of that [fishing], all I wanted from him was a bit effort from him to come to London or Newcastle to come and see me. 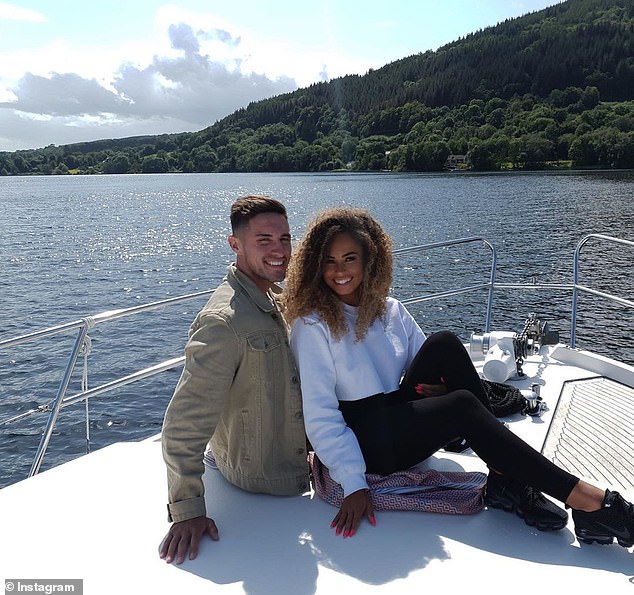 Split: The pair are fastest winners to part ways in the show’s history, just five weeks after winning the ITV2 reality show (pictured together last month)

‘He’s a lovely guy, I am not sure what will happen in the future, it’s a bit of an odd situation.’

The pair are fastest winners to part ways in the show’s history, just five weeks after winning the ITV2 reality show.

They are the third 2019 couple to split, following on from Anton Danyluk and Belle Hassan and Chris Taylor and Harley Brash.