They’ve recently returned from a sun-soaked break in Dubai.

And Eve Gale, 21, looked sensational as she flaunted her curves in a tiny maroon crop top, while on a night out with her stylish sister Jess on Friday.

The Love Island stars both commanded attention as they posed up a storm in their sizzling ensembles outside MKNY HSE in Mayfair, London. 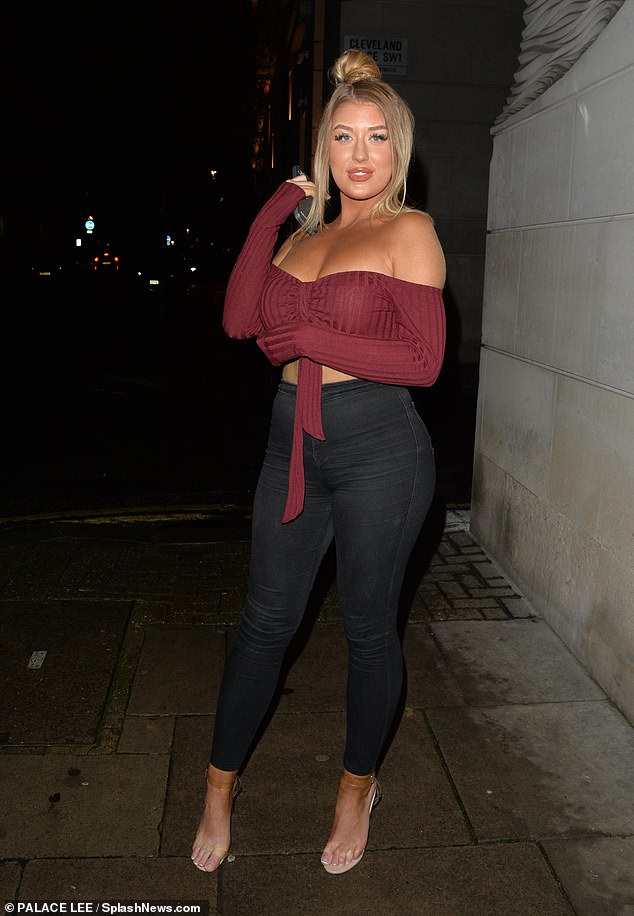 Sizzling: Eve Gale, 21, looked sensational as she flaunted her curves in a tiny maroon crop top while on a night out with her stylish sister Jess in London on Friday

Eve put on a busty display in a low-cut ribbed top, which boasted long sleeves and a statement tie detail in the middle.

She paired her eye-catching shirt with some black skinny jeans and added a little extra height to her frame with a pair of clear heels.

The blonde beauty pinned half of her hair back in a stylish bun for the evening’s activities, letting the rest of her tresses cascade over her shoulders.

Jess also cut a fashionable figure as she flashed her abs in a high-neck beige crop top and pair of skin-tight leather trousers.

Flaunt it: Love Island star Jess also ensured to work all her angles as she showcased her killer curves and washboard abs in a tiny beige top

The reality star exuded confidence as she worked all her angles for the camera, highlighting her pert derrière.

Sticking with a winning formula, Jess opted to complete her ensemble with a pair of nude heels which she also wore out for dinner on Thursday.

The twins’ night out comes after they returned from Dubai. During the luxury trip the blonde duo treated their followers to several sizzling bikini snaps.

It was recently revealed that Jess is set to star on Ex In The City, a spin-off series of MTV’s Ex On The Beach. 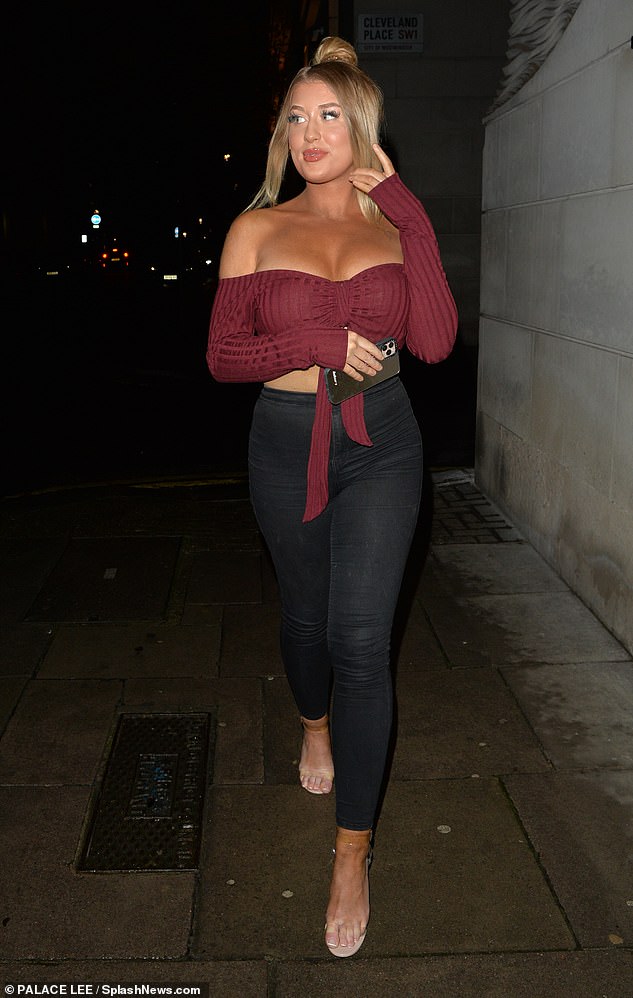 Glam: Eve put on a busty display in her low cut top which scooped over her cleavage

Night out: She matched her sister with a pair of black trousers and clear heels 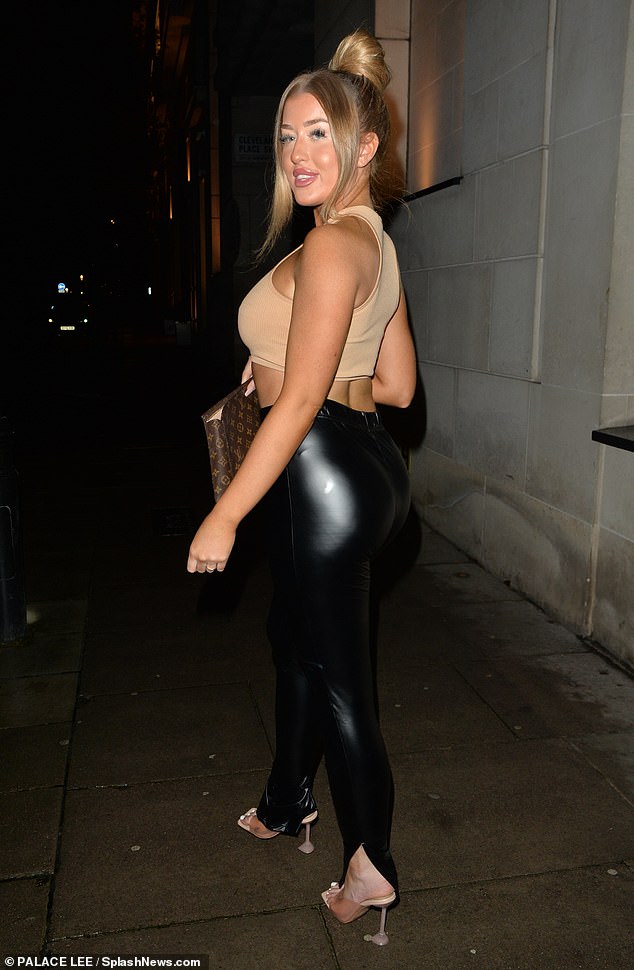 Style: Jess added a designer touch to her ensemble by toting a small Louis Vuitton bag

The first episode launched on Youtube on Tuesday and saw Megan, 24, gobsmacked when her ex-beau Charlie Frederick gatecrashed her date.

Meanwhile, Jess has been single since June after announcing she had split from her Love Island boyfriend, Ched Uzor. 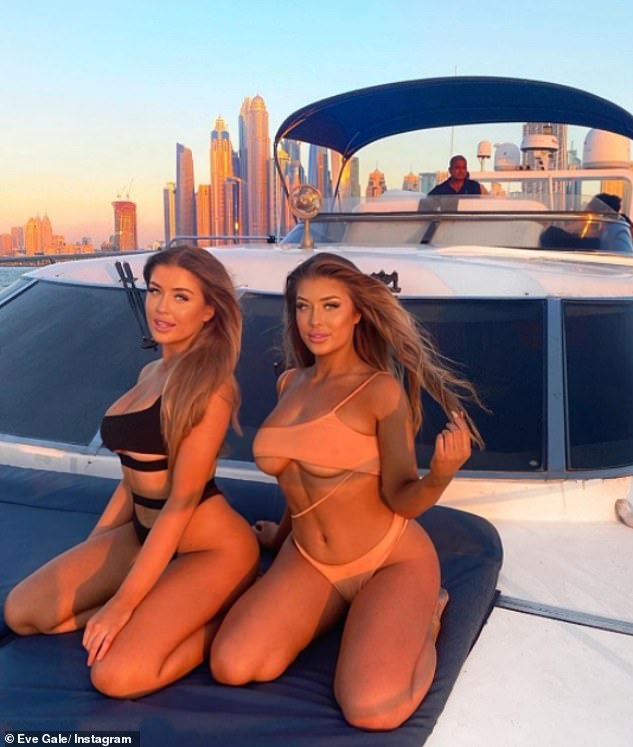 Don’t mind us: It comes after the Love Island twins soaked up the sun during their winter break in Dubai (pictured, Jess (L) and Eve (R))

In a statement shared exclusively with MailOnline, the blonde beauty confirmed that the lockdown played a role in the end of their romance, while insisting that she and the hunk, 23, will continue as friends.

‘After a whirlwind romance in the Love Island villa, unfortunately Jessica Gale and Ched Uzor have made the mutual decision to split,’ read a statement from the reality star’s publicist.

‘They have unfortunately felt the effects of lockdown separation but will continue as friends. They wish nothing but the best for each other and full success in each others careers.’ 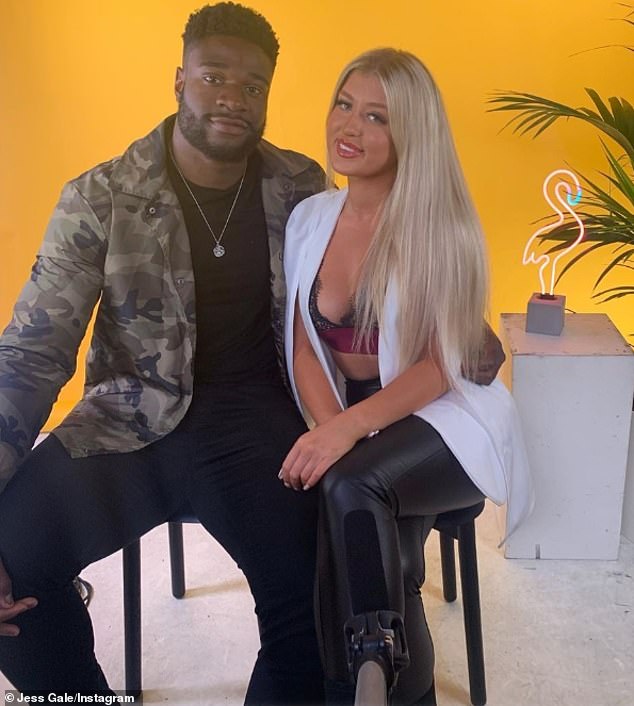 Separated: It was recently revealed that Jess is set to star on Ex In The City, a spin-off series of MTV’s Ex On The Beach after splitting from her Love Island boyfriend Ched Uzor in June