Matt Damon shows toned physique as relaxes on the beach

Matt Damon, 49, reveals his toned physique as he soaks up the sunshine on the beach in Malibu with his family

He might be known for his action-packed car chases in the Jason Bourne movies.

But Matt Damon is taking it easy as he soaks up the Malibu sunshine to reveal his muscular, athletic physique on a relaxing trip to the beach on Wednesday.

The movie star, 49, kept a low profile as he watched over his daughters, Isabella Damon, 14, and Gia Zavala Damon, 11, and mingled with friends during the sun-drenched outing. 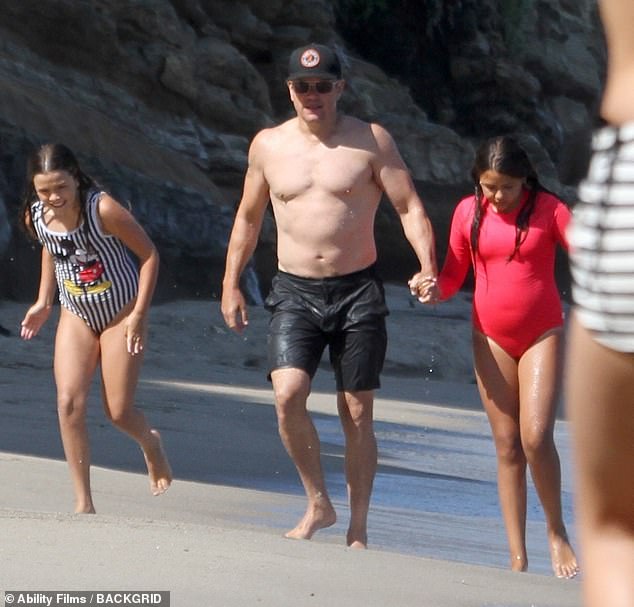 Laid back: Muscular Matt Damon took a trip out to the beach in Malibu on Wednesday to spend quality time with his children and catch up with close friends 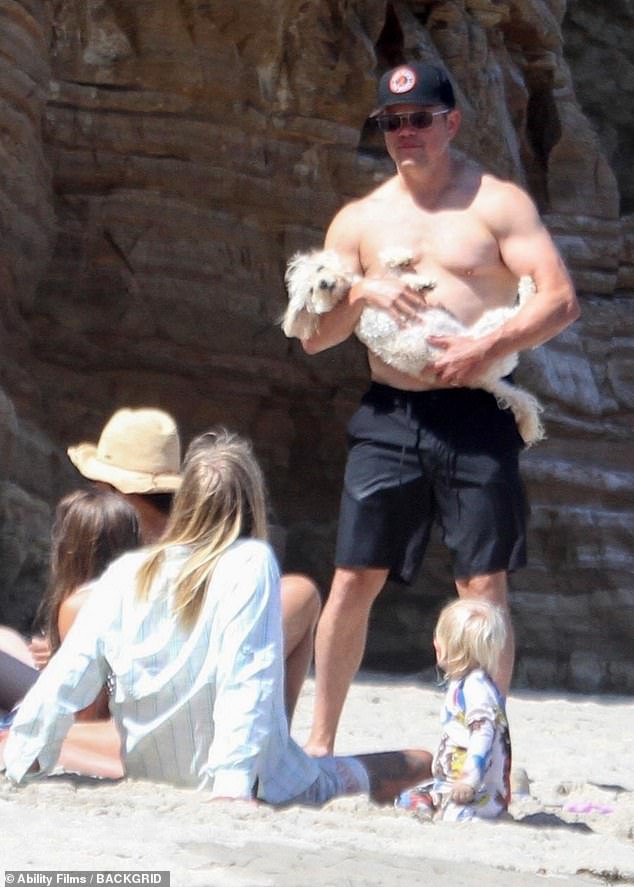 Part of the family: The Silver Screen star, 49, cradled one of the dogs in his arms as he chatted to several friends and children

He opted for large shades, a black cap and matching swimming trunks to showcase his toned stomach and broad shoulders.

Matt kept things simple with a clean shaven look as he embarked on a casual stroll in the sand with his family and his adorable pooches in tow.

He was joined on the sandy beach excursion by his wife of fifteen years Luciana Barroso, 44, and their three children, Isabella, 14, Gia, 11, and Stella Damon, nine. 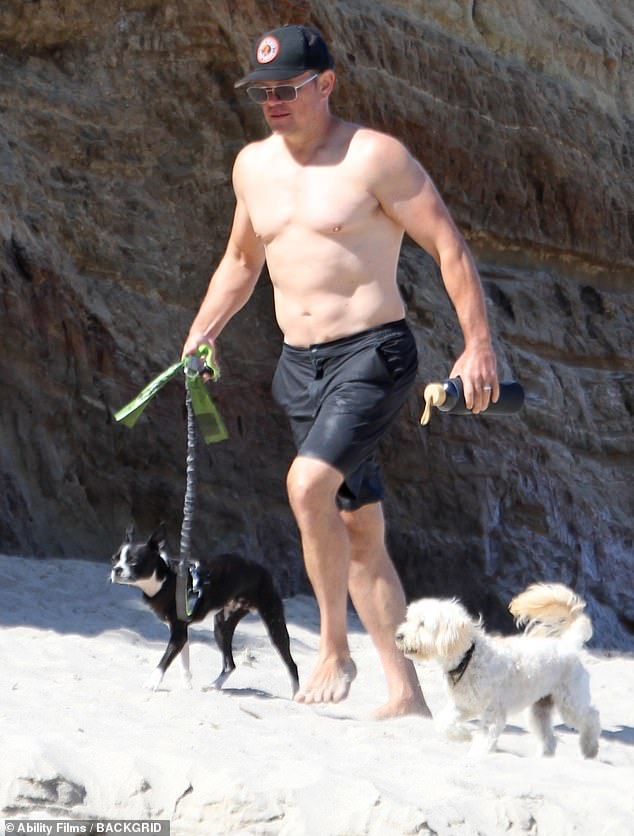 Taut: Matt debuted his toned stomach and broad shoulders as he enjoyed a leisurely stroll accompanied by two pooches

The Good Will Hunting star went for a dip in the ocean with his family before emerging to rejoin the group.

His pals were seen conversing and laughing as they made the most of the picturesque location and and the sea-salt air.

Earlier this year it was first revealed that Matt and his family were isolating in Ireland after becoming stuck by a travel ban enforced on the country.

The Hollywood star had been residing in a lavish €8million (£7million) pad in the rural area. 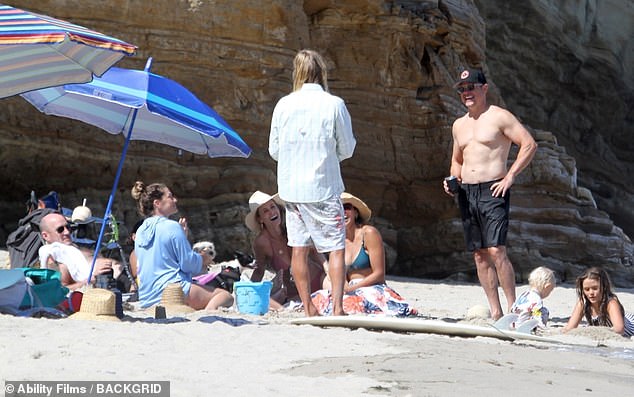 Matt first spoke about living in lockdown in the Emerald Isle during an interview with Graham O’Toole and Nathan O’Reilly on Ireland’s Spin 103.8’s Fully Charged.

During the interview the star also revealed that his daughter Alexia, 21, had made a full recovery from coronavirus while living in New York City.

Alexia is his wife Luciana’s daughter from a previous relationship however he referred to her as his ‘eldest daughter.’

He said: ‘Our oldest daughter is in college, she’s in NYC. She had COVID really early on, along with her roommates and got through it fine. But everybody’s OK…

‘For Lucy’s mum and my mum, it’s scary for that generation. I think we’ve all got the message now, everyone’s doing the isolation and social distancing and hand-washing and everything we can to mitigate this but it’s frightening, certainly for our parents.’

Speaking about his time in Ireland, he said: ‘It’s incredible. This is one of the most beautiful places I’ve ever been. It feels a little like a fairytale here. Bono lives over there, Enya lives over there’.

The star and his family have since jetted back to their home in California where they can make the most of the sun-soaked beaches and beautiful weather. 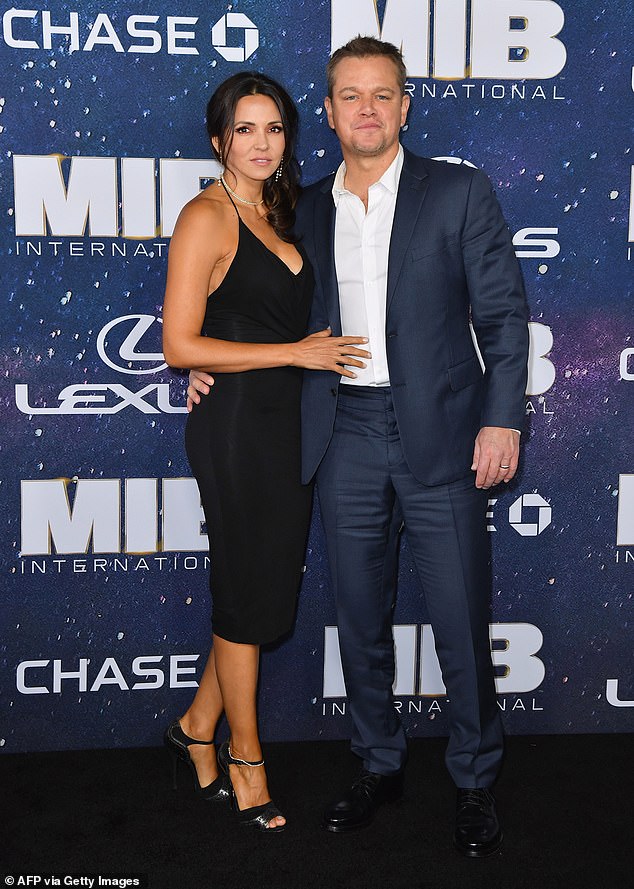 Lockdown: Matt and his family were forced to isolate in Ireland after becoming stuck by a travel ban enforced on the country (pictured with wife Luciana in 2019)