Melanie Sykes steps out in London after fling with gondolier

Melanie Sykes, 50, tries to keep a low profile as she steps out on her return to London after whirlwind six-day fling with 23-year-old gondolier in Venice

Melanie Sykes was spotted back in London on Sunday – having returned from her whirlwind fling with a gondolier in Venice.

The presenter, 50, looked to be keeping her head down as best she could as she ran errands in dark shades and a casual ensemble, having left Riccardo Simionato, 23, behind her in Italy.

The ex-Des And Mel host wore ripped skinny jeans and a white Tee, with a cropped cream jacket over the top, a warm scarf and heeled ankle boots. 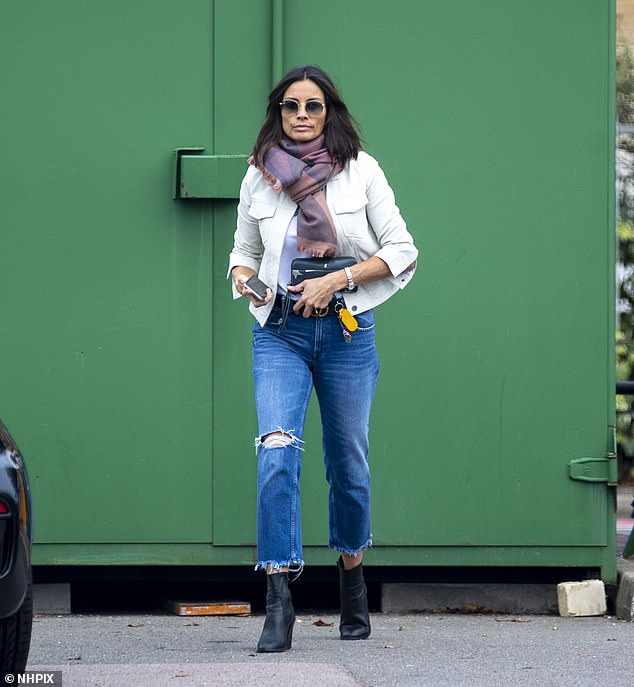 Back to reality: Melanie Sykes was spotted back in London on Sunday – having returned from her whirlwind fling with a gondolier in Venice

She wore a bronzing wash of make-up and allowed her raven tresses to fall loose.

She was seen clutching her phone as she headed to her car, also seen enquiring at a customer service kiosk.

Mel was pictured in Venice kissing the handsome young man passionately, draping her arms around his neck as he clung tightly to her waist.

The TV and radio presenter, who found fame in the 1990s as the face of Boddingtons bitter, told her online followers she was feeling ‘just a bit giddy’. 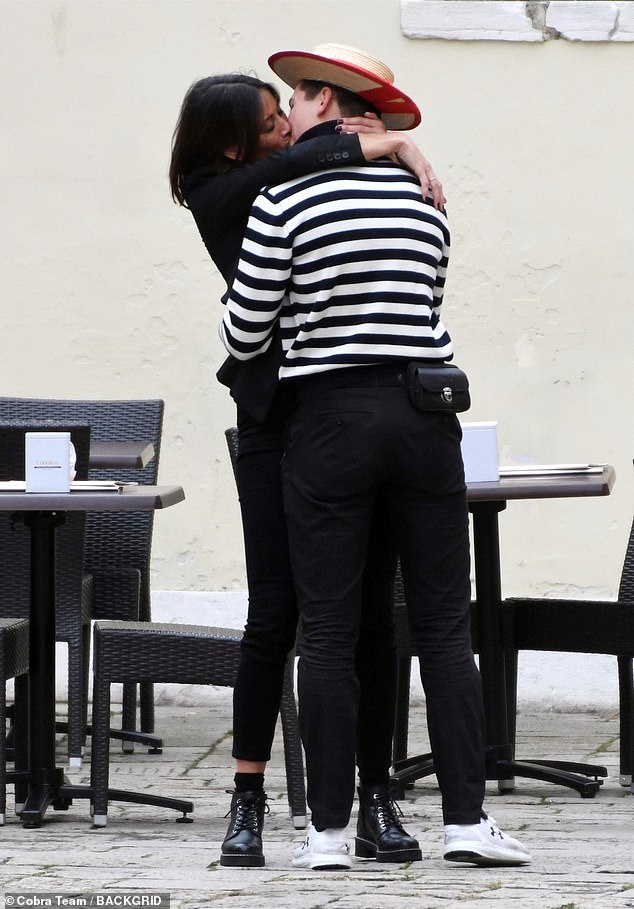 Passion: The presenter, 50, left Riccardo Simionato, 23, behind her in Italy, having been spotted making out furiously with him on the piazza 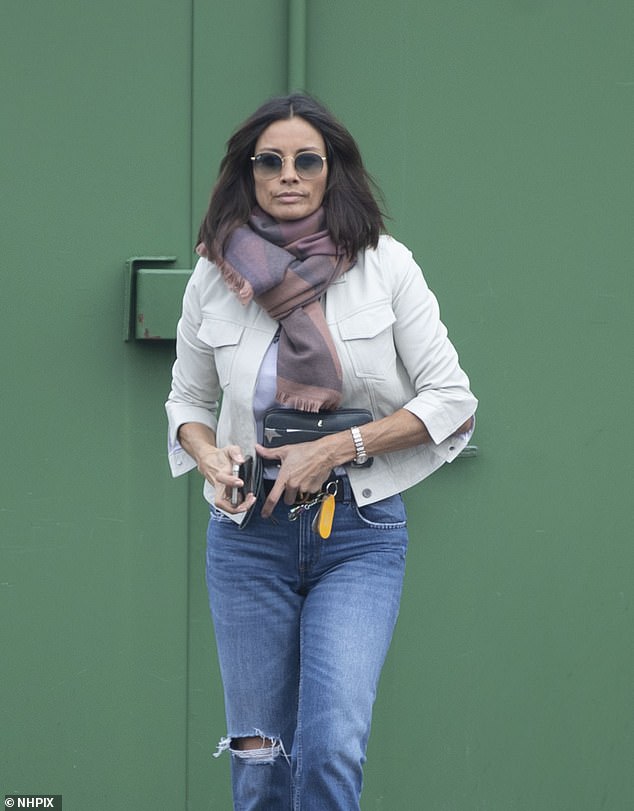 The honeymoon’s over: Mel looked to be keeping her head down as best she could as she ran errands in dark shades and a casual ensemble

Mel and the handsome gent, who still lives with his parents, went on to enjoy a six-day fling in the Floating City.

The gondolier declined to discuss their dalliance, apart from making one comment on the age difference.

He said of Melanie, who is the mother of sons Roman, 18, and Valentino, 16: ‘Beauty is relative.’

Manchester-born Ms Sykes was in Venice on a mini-break with a female friend and first posted a picture of herself being punted along a canal by obliging Riccardo last Saturday.

Glum: The ex-Des And Mel host wore ripped skinny jeans and a white Tee, with a cropped cream jacket over the top, a warm scarf and heeled ankle boots 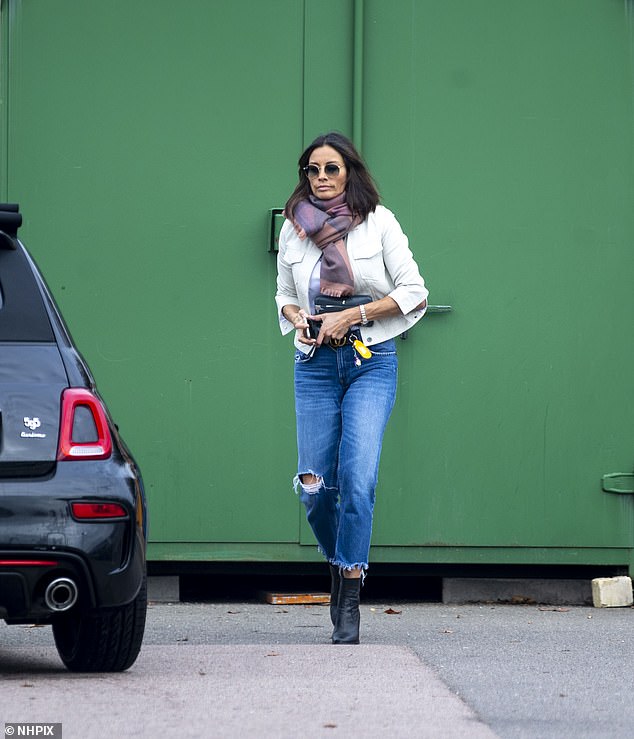 All made up: She wore a bronzing wash of make-up and allowed her raven tresses to fall loose

The pictured embrace came less than 48 hours later, on Monday, and the next day she was seen enjoying an alfresco breakfast in the gondolier’s company in the intimate Campo San Toma square.

The following morning, Riccardo abandoned his gondola and joined Ms Sykes for a sightseeing boat trip along the Grand Canal.

Of his relationship with the former Big Breakfast star, Riccardo was coy. Speaking back on board his gondola, he grinned broadly as he told The Mail on Sunday: ‘I don’t remember. I meet a lot of people.’

Pressed further, Riccardo, who was not born when Ms Sykes first found fame, acknowledged the 27-year age gap but added: ‘Beauty is relative. Maybe what in your eyes is beautiful, isn’t to me.’ 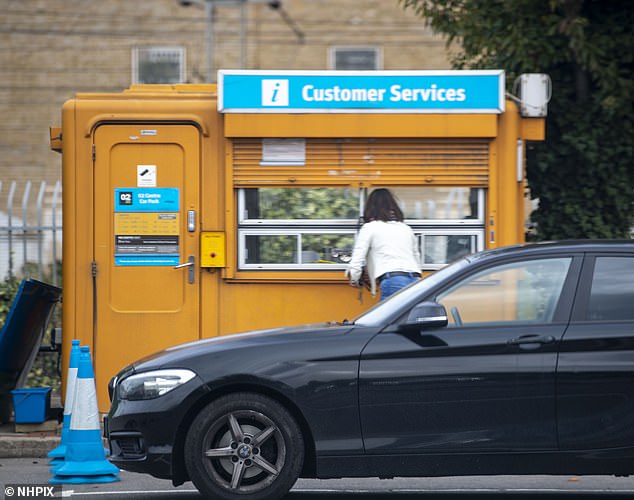 May I help you? She was seen inquiring at a customer service kiosk 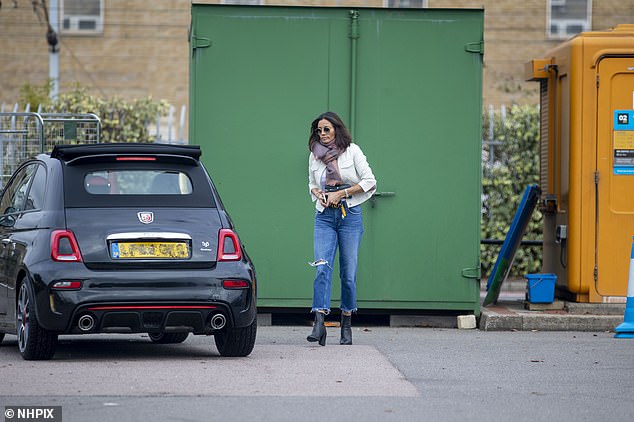 Back down to Earth: She was seen clutching her phone as she headed to her car

He remained with Ms Sykes until Thursday, the last day of her holiday, when they were pictured arm-in-arm under an umbrella.

Riccardo wheeled Ms Sykes’s suitcase on to a water taxi that took them both to the city’s Marco Polo airport, where he waved her off as she made her way to passport control.

But he clammed up when asked if he planned to see Ms Sykes again. For Ms Sykes’s part, she posted a tantalising picture on social media of the famous Rialto bridge with the caption: ‘Ciao for now.’ 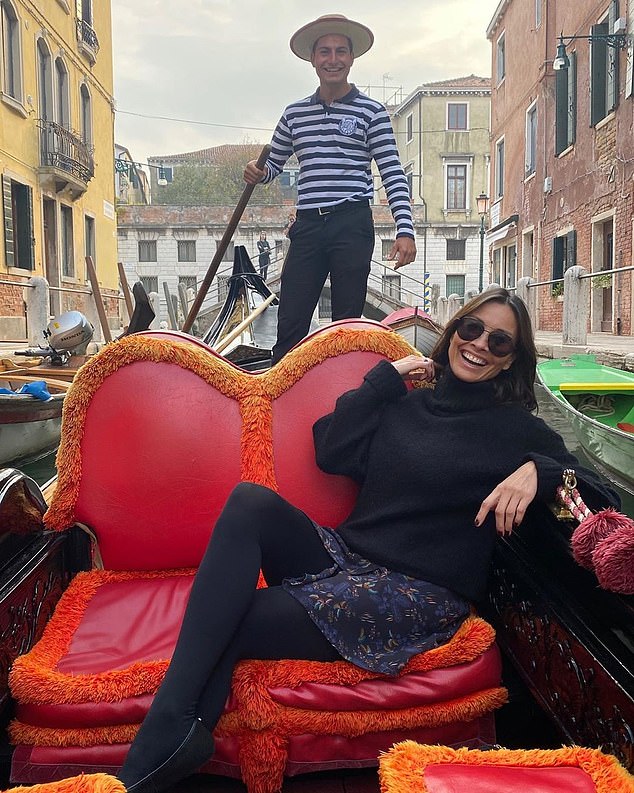 Saturday: On her first day in Venice, and Melanie headed straight for the gondolas, where she met her holiday romance Riccardo

A former chef who followed in his father’s footsteps to become a gondolier three years ago, Riccardo earns €80 (£72) for each half-hour boat ride.

Ms Sykes’s dalliance is in keeping with her penchant for younger men. ‘Men of my age tend to have shut down in some way, or they’re not as confident,’ she said three years ago.

‘One of the reasons I think I end up with [younger men] is because they don’t seem to have a problem approaching me. They have a bit more about them and they’re more confident and I need someone with confidence.’

Ms Sykes made her name pulling pints from an ice cream van in adverts for Boddingtons beer in 1996.

Coincidentally, a subsequent Boddingtons advert, this time starring actress Anna Chancellor, showed two Venetian gondolas drifting down a canal in Manchester, where the beer is made. 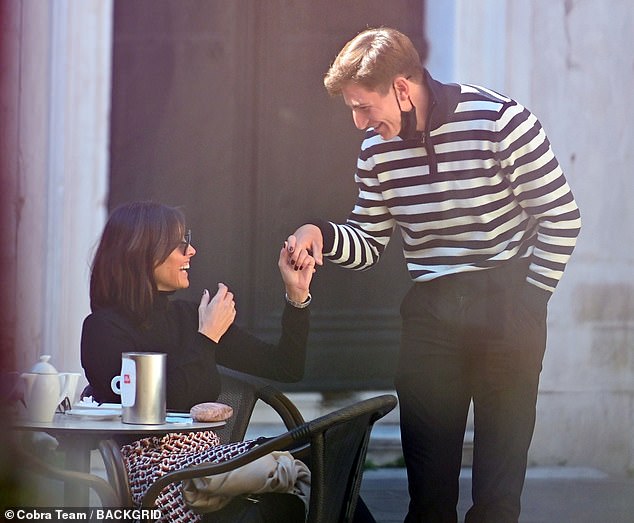 Tuesday: Melanie was seen enjoying an alfresco breakfast in the gondolier’s company in the intimate Campo San Toma square

Ms Sykes went on to host a number of TV shows including ITV’s Today With Des and Mel, with Des O’Connor, and Channel 4’s The Big Breakfast.

She also finished third in I’m A Celebrity in 2014 and has co-hosted a Radio 2 show with comedian Alan Carr, as well as having her own show on Capital Radio.

After the collapse of her first marriage to actor Daniel Caltagirone, Ms Sykes embarked on a whirlwind romance with Jack Cockings, a roofer, who she met on Twitter. Aged 28 at the time, he was 16 years her junior.

They wed in 2013, but she filed for divorce after just seven months of marriage, later admitting she married ‘the wrong person’.

She was briefly then linked to singer Olly Murs, 14 years her junior, and German golfer Martin Kaymer, who is 15 years younger, before dating comedian Steve Coogan, 55, for six months last year.