Miley Cyrus showcased and new beau Cody Simpson dressed as Billy Idol and his longtime flame Perri Lister for Halloween – and the pair could not stop kissing.

At one point, Idol and Lister were the toast of the post-punk scene of New York City following the huge success of the rock legend’s 1983 album Rebel Yell.

Then later that evening, Cody, 22, shared a snap of himself with Miley in a sexy corset and fishnets from their own personal ‘afterparty’. 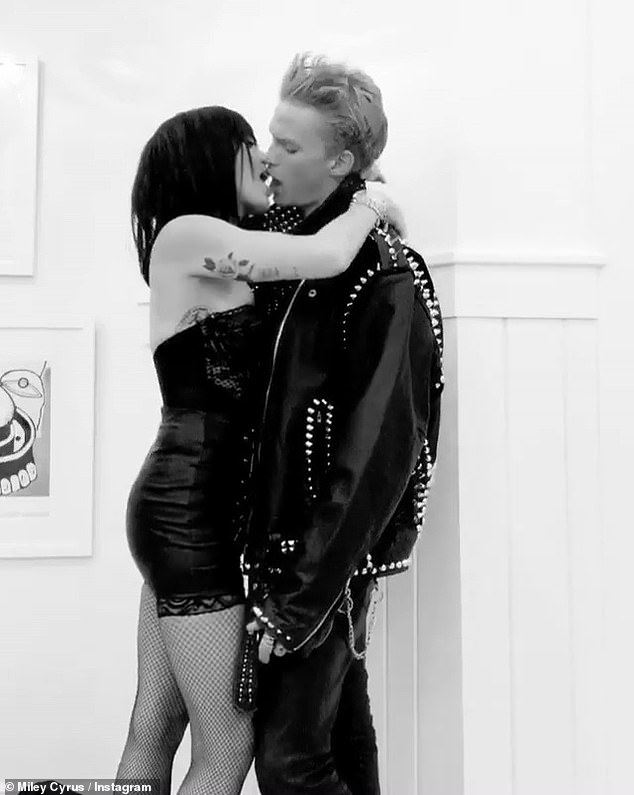 Puckering up: Miley Cyrus and beau Cody Simpson couldn’t stop kissing as they dressed up for Halloween as rocker Billy Idol and his 1980s flame Perri Lister 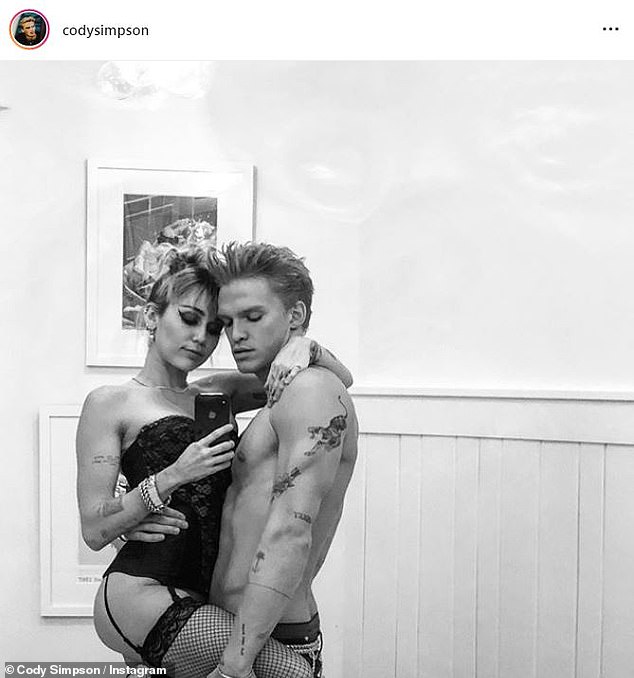 We don’t all need to know: The look was clearly working for Cody as later on, he shared this even racier snap, writing that this was the after party

Before heading out on the town, Cyrus, 26, shared a snap of herself and Simpson in full costume with the caption: ‘BILLY ❤️ PERRI.’

Simpson opted to wear a classic black leather jacket with metal studs, along with black fitted pants and a black tank top, all staples of Idol.

Of course, the Aussie star tried to recreate the White Wedding singer’s signature spiky blonde hairdo that has made him an easily recognizable rock star to the present day.

Cyrus, who was dressed in leggings and a white crop top, had not yet changed into her costume. 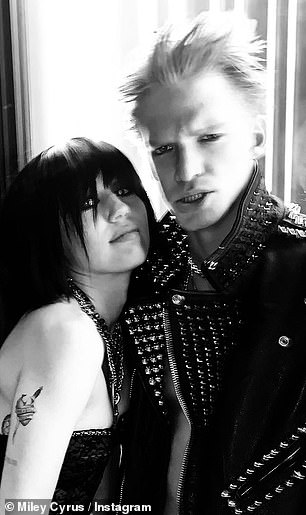 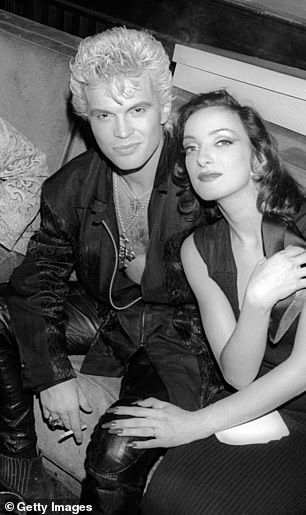 Going for it: They went all out with their costumes, with Miley wearing a dark wig 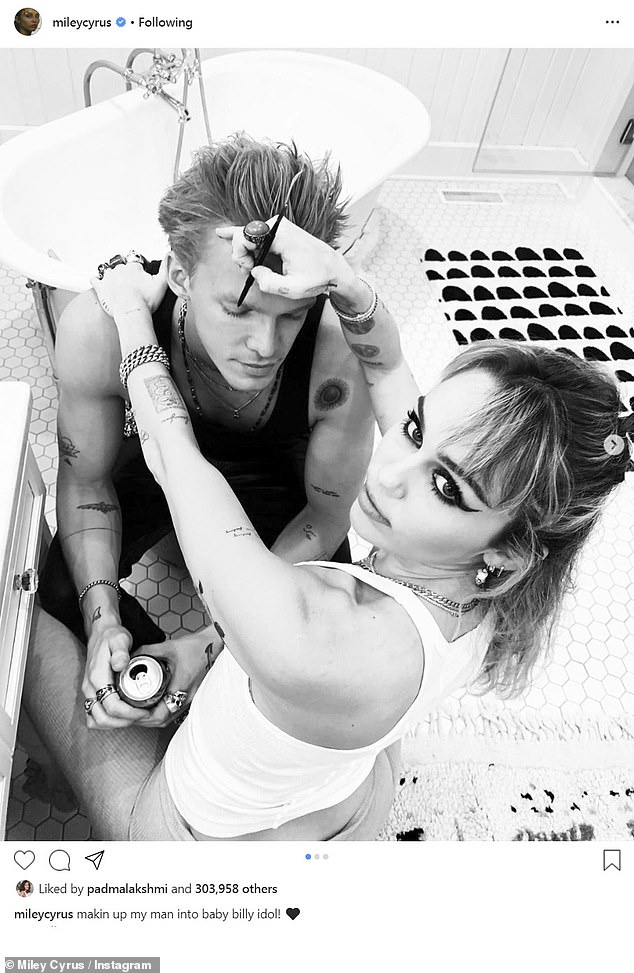 ‘It’s a nice day to start again’: The Wrecking Ball singer, 26, helped apply make-up to Simpson during his transformation into the rock legend 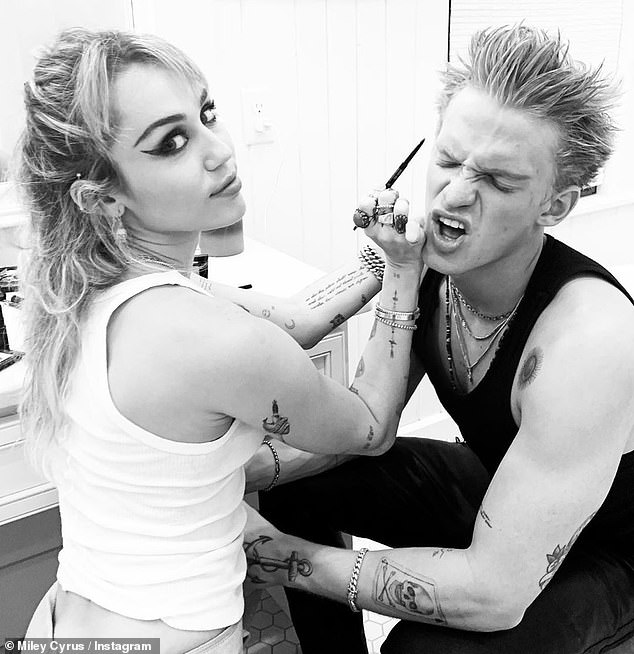 His Rebel Yell: Simpson even tried to recreate the White Wedding singer’s signature spiky blonde hairdo and lip-curling snarl that has made him an easily recognizable rock star

For comparison, Cyrus also shared a snap of the real Idol and Lister snuggled up during their heyday as a couple in the mid-eighties.

The pop superstar also gave her 100 million Instagram followers a behind-the-scenes look at how she helped transform her beau in three more black-and-white photos.

‘makin up my man into baby billy idol! ❤️’ she shared in the caption.

Cyrus can be seen applying eye make-up to Simpson in two of the snaps that were presumably taken in her bathroom at her Los Angeles home.

He tried to emulate Idol’s famous lip-curling snarl in one of them. 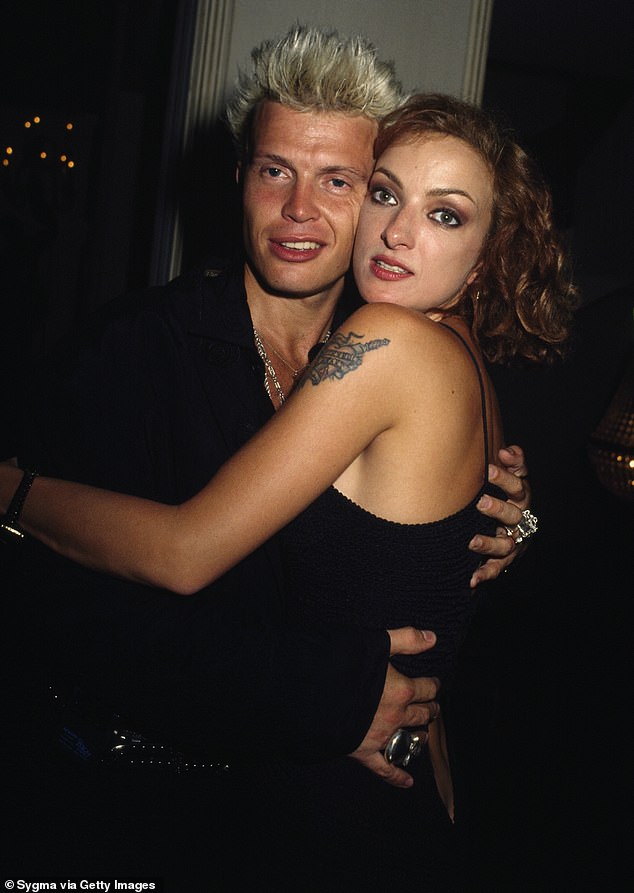 Rock royalty:  Cyrus has been very open about er love of Billy Idol’s music; Idol and Lister are pictured when they were the toast of the post-punk scene of New York City in the 1980s 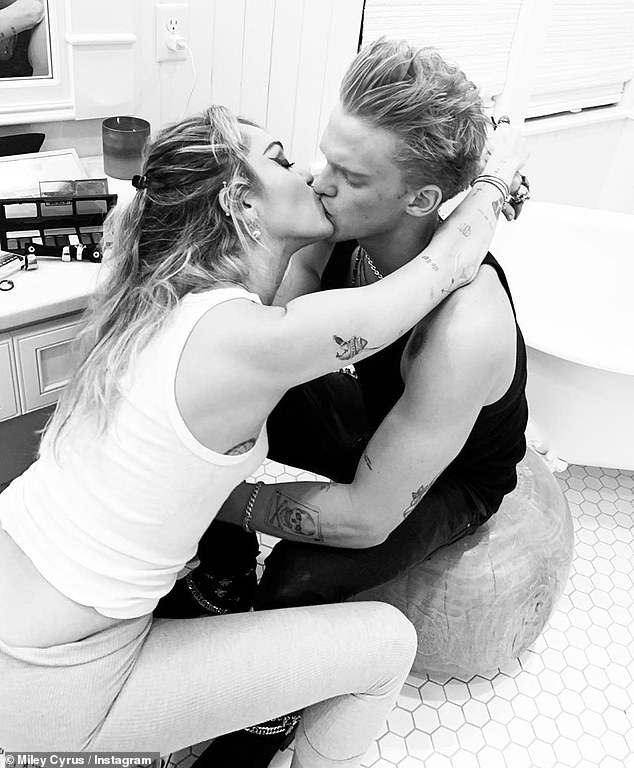 Cradle Of Love: The couple shared a passionate kiss in one of the three prep photos 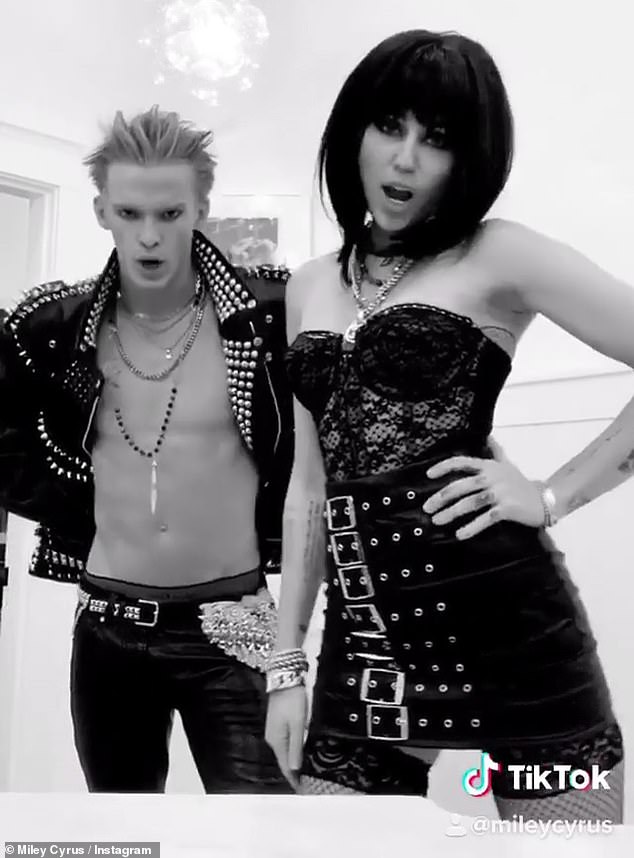 Wild: The couple seemed to enjoy getting into character 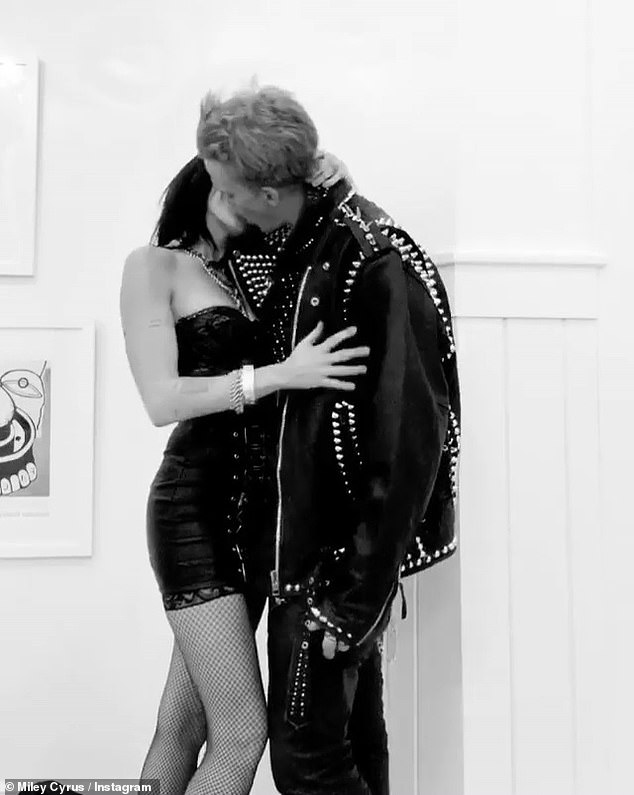 Smooching: The couple could barely keep away from one another 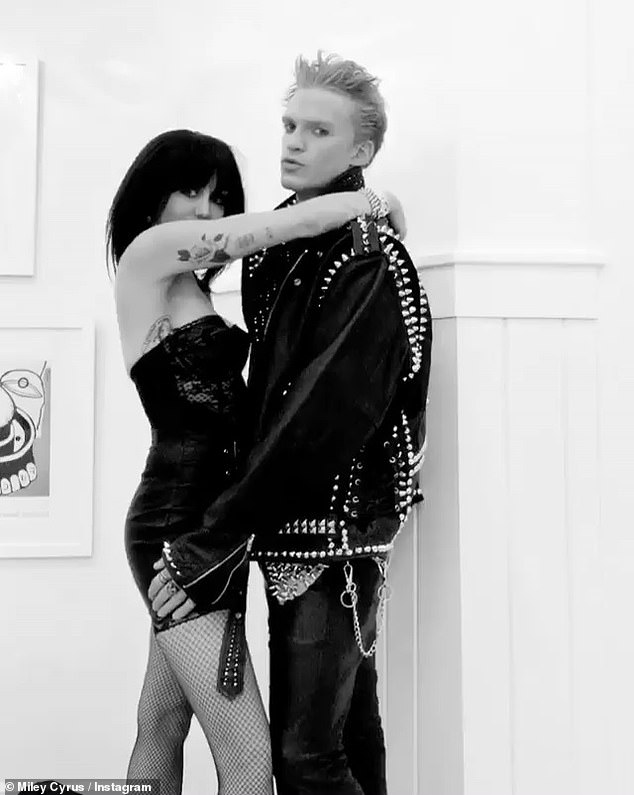 Into it: They seemed to love posing just as much as they loved kissing

The third picture in the series showed the two sharing a passionate kiss as the Wrecking Ball singer wrapped her arms around her man’s shoulders.

Idol and Lister were an item starting in 1980, one year before Idol’s first-wave punk band Generation X broke up, and Lister had made a name for herself in the British risqué dance troupe Hot Gossip.

Lister gave birth to the couple’s son, Willem Wolf, in 1988, and eventually they broke up for good in 1989.

Cyrus has been very open about her love Billy Idol’s music, and has even joined him on stage to perform his classic song Rebel Yell at the 2016 iHeartRadio festival in Las Vegas. 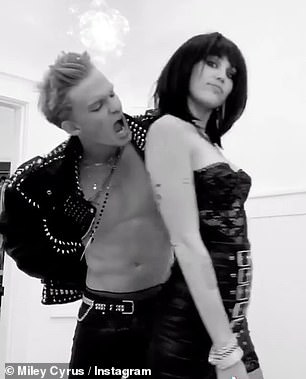 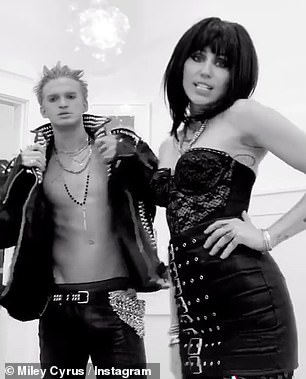 Close: The couple had lots of fun in their outfits as they made some Tik Tok videos together Love? The new couple couldn’t seem to get enough of one another 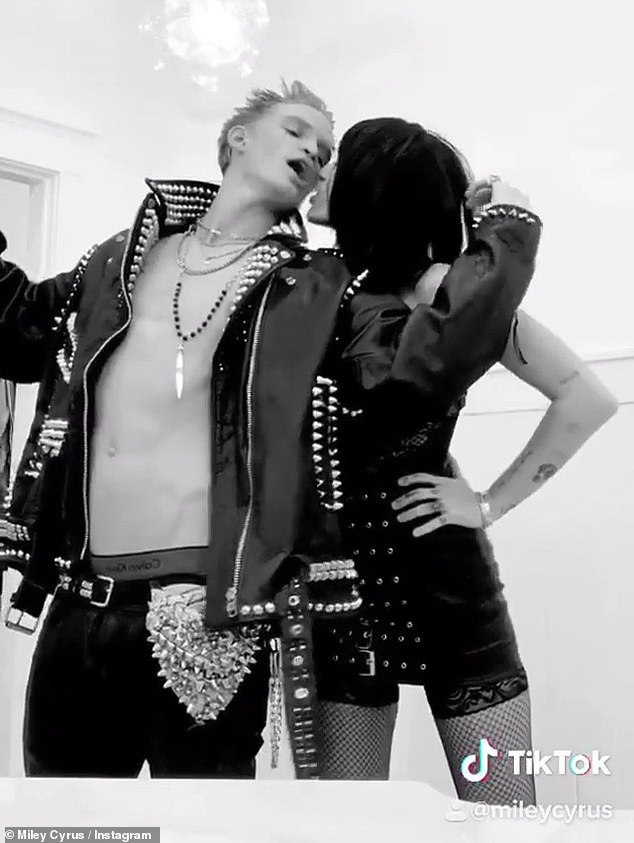 Oh get a room! Cody pulled Miley close towards him for yet more shots 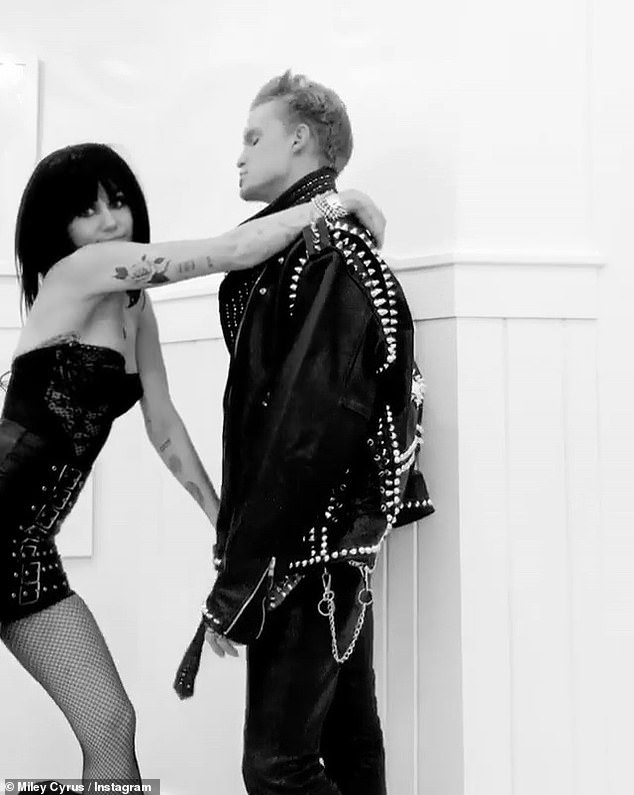 Necessary? Miley leaned in to grab her beau’s crotch as they documented their evening for all to see