Naomi Campbell is feted by the fashion industry after 30 years

Never-changing Naomi: She’s faced controversy during her career, but as the supermodel is feted by the fashion industry after 30 years, just what IS the ageless secret of Naomi Campbell?

She’s long been lauded for her feline beauty. And last night Naomi Campbell was honoured with the Fashion Icon Award by the British Fashion Council.

It was a fitting milestone in a modelling career that began more than three decades ago.

At 17, when she first appeared on a Vogue cover, she was the impossibly beautiful girl with the cat-like eyes, cheekbones that could have been carved by Michelangelo and skin so luminous, even in real life. 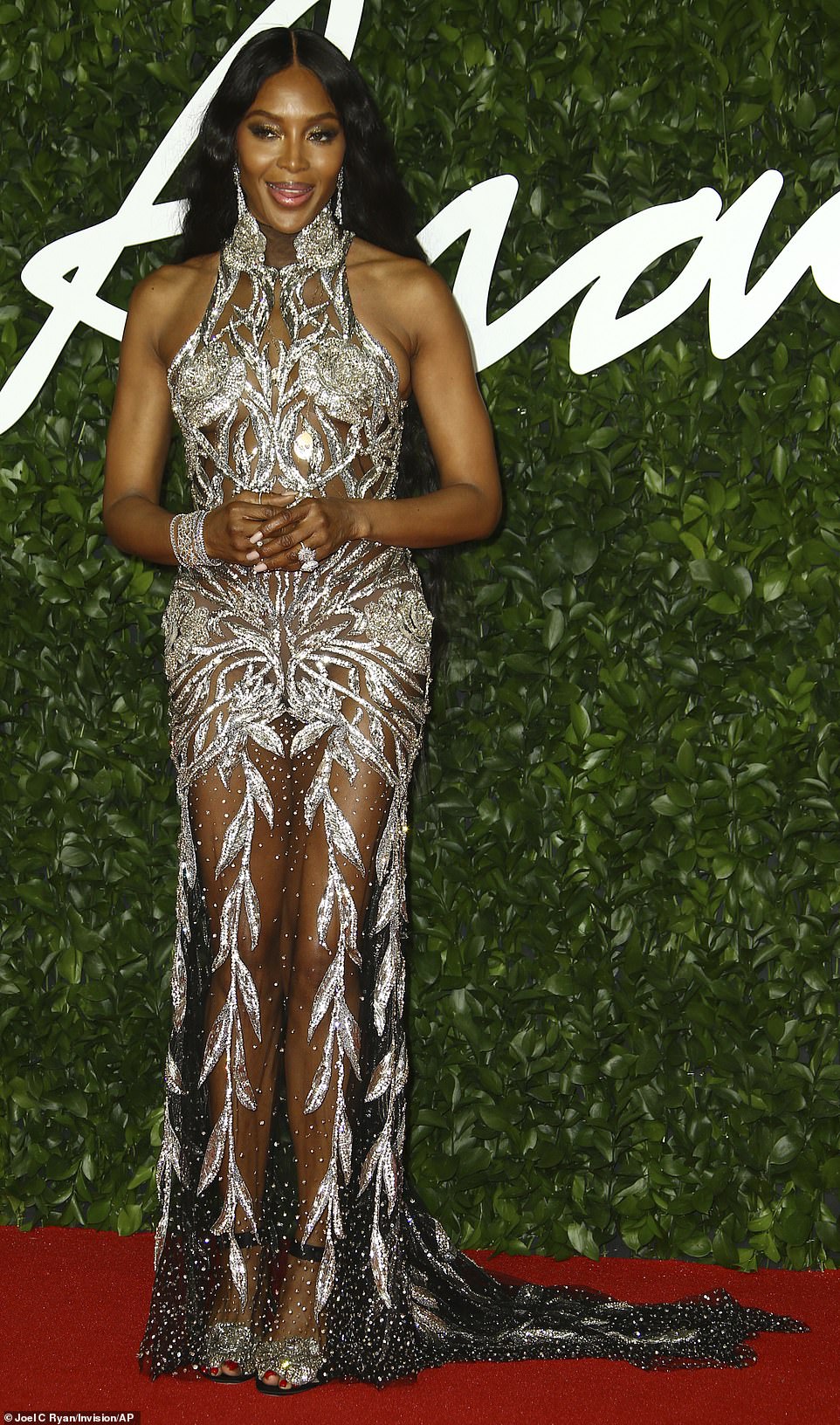 Today, at 49, she looks… well, almost exactly the same. She looked characteristically eye-catching in a dramatic, semi-see‑through, floor-length gown when she glided down the red carpet last night at The Fashion Awards.

The resulting photos of her could, at first glance, have been taken at any point in the past 30 years.

Perhaps she is even more gorgeously glowing as she hovers close to 50, matured and mellowed, yet still bagging Vogue covers and having become a passionate advocate for younger black girls in the fashion business.

See her in the transparent Versace dress she wore in 1993 and another sparkly Versace number she paraded in at a gala earlier this year, and you’ll be hard-pressed to spot much difference.

It could be argued that of all the models of her generation, she has gone the distance best of all, continuing to appear in top magazines and on the catwalks on a regular basis.

She’s notched up more than 500 covers in the course of her career as well as campaigns for Burberry, Chanel, Prada and Louis Vuitton to name just a few of the world’s most prestigious brands.

It wasn’t all plain sailing for Naomi, though, starting out in the Eighties after being discovered by a model scout on the streets of London’s Covent Garden.

In the early days, as the only black model in the original supermodel gang of Cindy Crawford, Christy Turlington, Linda Evangelista and Tatjana Patitz, it was only thanks to their support that she got some of the top jobs. 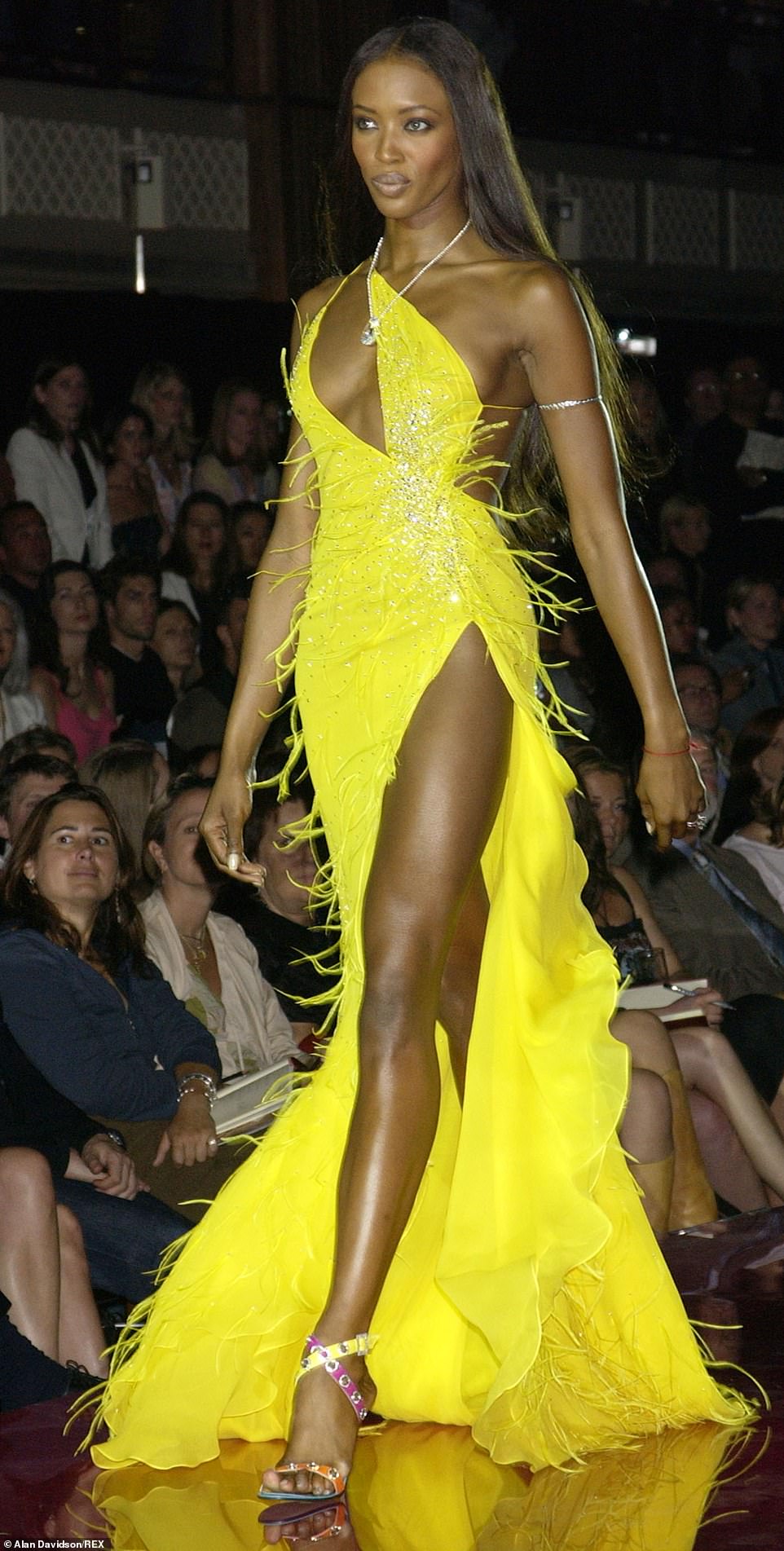 2002: Naomi Campbell took to the catwalk in a flamboyant yellow dress aged 32 for the Julien Macdonald Fashion Show in London

Turlington and Evangelista told Dolce & Gabbana they wouldn’t work for them unless they used Campbell as well. Yves Saint Laurent threatened to withdraw his advertising from French Vogue unless it put her on the cover.

The prejudice is no exaggeration. As editor of Cosmopolitan in the Eighties, I recall just how hard it was for a black model to break through back then.

When we shot another beautiful young girl of colour (not Naomi) for the cover, before going to press I was advised by the sales team from our distribution company that sales plummeted when black girls showcased the magazine.

2007: At aged 37,  she took strides down the catwalk for Miss Bikini LUXE during Milan Fashion Week

The fact was that no one used black girls as cover models in those days, so how could they possibly know? I refused to pull it, and when the sales figures came in they were unaffected.

Over the years, Naomi has been both praised for her beauty and pilloried for her behaviour.

Ironically, though, her diva reputation, admission of drug addiction and pleading guilty to assaulting a housekeeper by lobbing a mobile phone at her, seem only to have added to her iconic status.

BA may have banned her from flying wth them after she rowed with police officers at Heathrow, and she admits to still dealing with ‘anger management issues’, but the fashion industry is fast to forgive bad behaviour.

At times mauled by the media, she has never stopped working or being a trouper.

When she famously toppled over on the catwalk at a Vivienne Westwood show, thanks to a pair of skyscraper purple platforms that resembled instruments of torture, she managed to quickly rescue the situation.

2018: At aged 48, she attended the CFDA fashion awards in a captivating red ensemble

As the great and good of the fashion business exclaimed in horror and dozens of hungry news photographers snapped her sprawled on the floor, she turned a grimace of shock into a broad grin.

‘I’m no perfect human being,’ she has said.

Breathing? Breathtaking, more like, as these pictures of the pout-perfect, body-perfect (if not always behaviour-perfect), newly anointed Fashion Icon prove.