Naomi Campbell poses with a surgical mask, rubber gloves and anti-bacterial wipes as she reveals her meticulous cleaning routine when flying

She is supermodel who is high in demand, jetting all over the world.

But Naomi Campbell revealed her elaborate get-up to avoid germs while flying, as she shared a snap wearing a surgical mask and rubber gloves while brandishing anti-bacterial wipes.

The British model, 49, took to Twitter to share the hilarious snap, as she lounged in her seat ready for take off. Keeping clean: Naomi Campbell revealed her elaborate get-up to avoid germs while flying, as she shared a snap wearing a surgical mask and rubber gloves while brandishing anti-bacterial wipes

Looking as glamorous as ever, the star wore her hair long and sleek – but opted to accessorise her outfit with an array of cleaning garb.

The self-confessed germophobe held up her hand donned with a latex glove, as she she covered her stunning good looks with a mask and sunglasses.

In her other hand, the star toted a pack of Dettol wipes which she no doubt used to clean the surfaces before take-off. 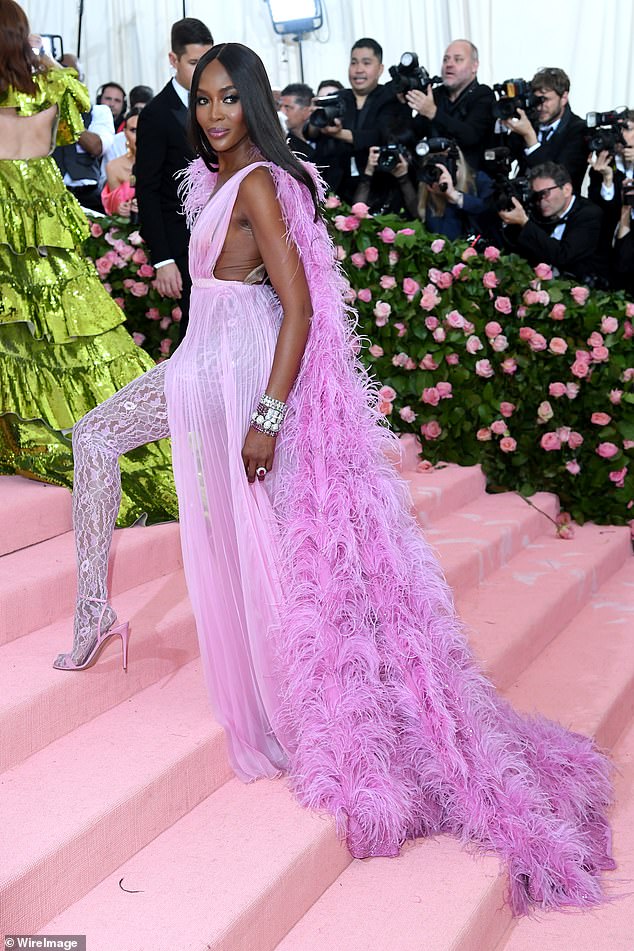 Germophobe: The British model, 49, took to Twitter to share the hilarious snap, as she lounged in her seat ready for take off

It isn’t the first time Naomi has shared in insight into her elaborate hygiene rules with fans.

Last month, the model posted a video on her YouTube channel where she chronicled her airport routine as she travelled from France to Qatar.

‘I love traveling. I was born traveling,’ Campbell tells the camera in the clip. ‘I love being everywhere but yet nowhere at the same time.’ 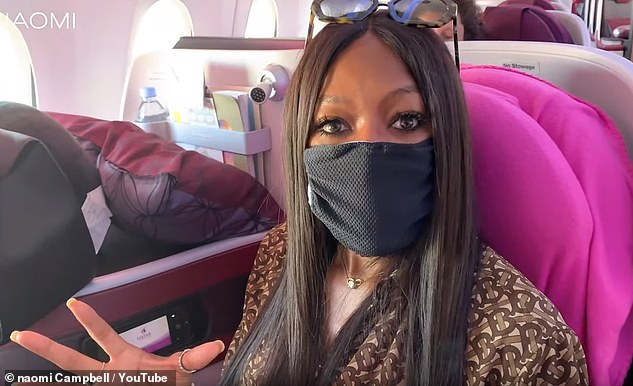 Hygiene routine: Last month, the model posted a video on her YouTube channel where she chronicled her airport routine as she travelled from France to Qatar

NAOMI’S ROUTINE: OVER THE TOP OR A GOOD WAY TO AVOID GERMS ON A FLIGHT?

With an aeroplane’s enclosed space, recycled air and spluttering passengers, many people complain of feeling under the weather after a flight.

Planes may not be crawling with bacteria and viruses as much as people think, with air filters keeping out many pathogens.

However, the pressure of transporting thousands of passengers a day can leave cabin crew unable to clean, resulting in tray tables that are ‘more germ ridden than toilets’.

While supermodel Naomi Campbell may rely on masks, wipes and seat covers to keep her fighting fit in flight, medics are conflicted as to whether such extreme measures are over the top or just common sense.

Passengers use tray tables for everything from eating and reading to even resting their heads on while they try and catch some shut eye.

This makes these fold-down plastic trays one of the most germ-ridden places on an aeroplane, Dr Abinash Virk, an infectious-disease expert at the Mayo Clinic, told Frommer’s.

He told ABC News: ‘The flu virus will live on a hard surface for about 24 hours.

‘Intrinsically, the bathroom is cleaner’.

Dr Virk recommends passengers run an alcohol-based wipe over the trays to kill any lingering germs.

Pharmacist Shamir Patel of Chemist-4-u.com told MailOnline: ‘I would advise passengers to take their own disinfectant wipes – like Naomi Campbell revealed she does.’

However, Dr Frank Contacessa, an internist at Westchester Health, New York, urges us to take it one step further and avoid using tray tables altogether.

He told The Points Guy: ‘Don’t use the tray table and if you really have to, make sure you carry sanitary wipes with you and clean it before you use it.’

However, Dr Tina Joshi, lecturer in molecular microbiology at the University of Plymouth, disagreed.

She told MailOnline: ‘This is a matter of personal preference but I don’t believe this is entirely necessary.

‘An everyday public environment (buses and trains, door handles, money etc) is likely to harbour many microorganisms and these may not necessarily be infectious to a person – unless the person is heavily immunocompromised.’

Germaphobes could wipe down every surface or even wear disposable gloves à la Naomi.

However, Dr Virk insists simply washing your hands with soap and water, or using a sanitiser, will be sufficient to keep you germ-free while in flight.

‘This means a combination of good hand hygiene with either soap or water or an alcohol-based hand sanitiser.’

He told MailOnline: ‘This is not necessary, simply wash your hands with soap and water before you leave. Plane toilets no different to public toilets.

‘Interesting to know Naomi has an additional job as a toilet cleaner!!’

Naomi’s mask may seem over-the-top, however, one medic called it a ‘good idea’.

Dr Nathan Favini, medical lead at the healthcare start-up Forward, said: ‘Respiratory viruses are the most common cause of illness while traveling and are transmitted through the air.

‘It’s a good idea to carry a mask to protect yourself if you sit near someone who has symptoms of a respiratory infection.’

However, some studies suggest masks are only effective if worn by an infected person, rather than as a preventative measure by healthy passengers.

‘And this air passes through a high efficiency particle air filter (HEPA) before re-entering the cabin.

‘These filters effectively remove dust, vapors, bacteria, fungi and the droplets via which most viruses are spread.’

Dr Smith argued the air on a plane is filtered more than in other enclosed spaces, like an office.

He added anxiety over flying in general may prompt people to become panicked about infections while in the air.

While countless infected passengers may have sat in your seat before you, Dr Virk stresses the risk of catching something from your chair is low.

This is because your clothes act as a barrier between you and the cushion.

And don’t worry about the arm rests either.

‘Unless you have a skin break, you’re not going to pick up anything from here,’ Dr Virk said.

The medic admits, however, he does not put his hand all the way in the seat-back pocket in front of him.

‘This isn’t based on a study but I don’t know what’s down there,’ he said.

However, Mr Patel warned passengers could pick up lice from head rests.

‘Headrest covers are regularly checked for “cleanliness”, but they’re rarely changed after every short haul flight,’ he told MailOnline.

‘And there can be four or five flights every single day.

‘If the seat comes into contact with a passenger with head lice, it’s very probable that some of the bugs could linger in the headrest.’

After boarding the plane, she busts out a pair of gloves and then cleanses the entire area around her seat — everything from the table and TV screen to the headrest, seatbelt, and the back of the seat in front.

‘Clean everything you touch,’ she advises. ‘Anything you could possibly touch. This is what I do on every plane I get on,’ she explains. ‘I do not care what people think of me. It’s my health and it makes me feel better.’

She also brings her own seat cover, which she gets hand-washed at her hotel, and masks up to ‘protect’ herself.

‘No matter what plane you take, private or commercial, people start coughing and sneezing and it makes me . . . I just can’t.’ 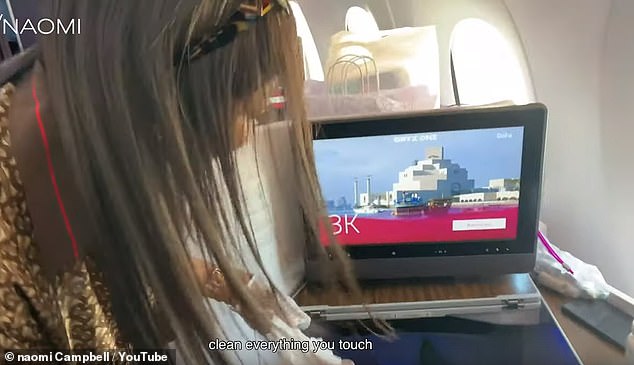 Giving it a scrub: After boarding the plane, she busts out a pair of gloves and then cleanses the entire area around her seat