When he was 13, Leo Mandella began posting photos of his streetwear outfits to his Instagram account, @gullyguyleo, and with his sophisticated colour sense, confident poses and baby face, he was a quick hit. His hundreds of posts earned him a follower count comfortably in the six figures, but still he craved more.

"I want to show that I'm more than a kid who wears outfits," Mandella, now 15, said. "I've always known if this blows up, I can create a brand on the back of it." 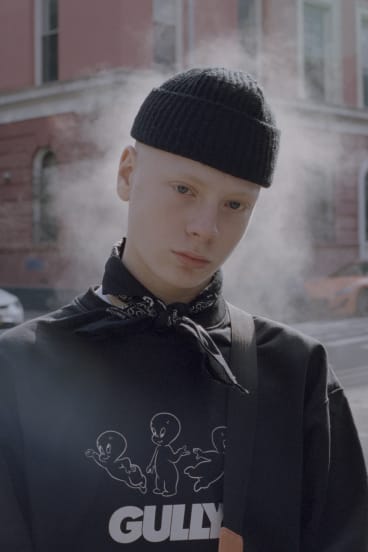 Making clothing of his own would be a natural extension of his brand — Mandella eventually released a few items under the Gully brand name — but he wanted to make a loud, unexpected splash. His idea: a colouring book, with 25 line illustrations of him wearing high-end streetwear, accompanied by a pack of Gully crayons. Released late last year, it sold several hundred copies.

"We wanted to make it exclusive, for the people who were actually passionate about buying," Mandella said.

Which is to say, for the people who were so passionate about Mandella — a teenager living in Warwick, England, who invented himself online — that they craved an even more tactile connection. His colouring book is part of an emergent movement of micromerch: personal merchandise for niche public figures and celebrities (or even not-yet celebrities) made possible by innovations in manufacturing and distribution, and with mechanisms greased by the ease of the internet.

Consider it the modern-day equivalent of the private-press LP or the small-batch zine, amplified for social media and very late capitalism. 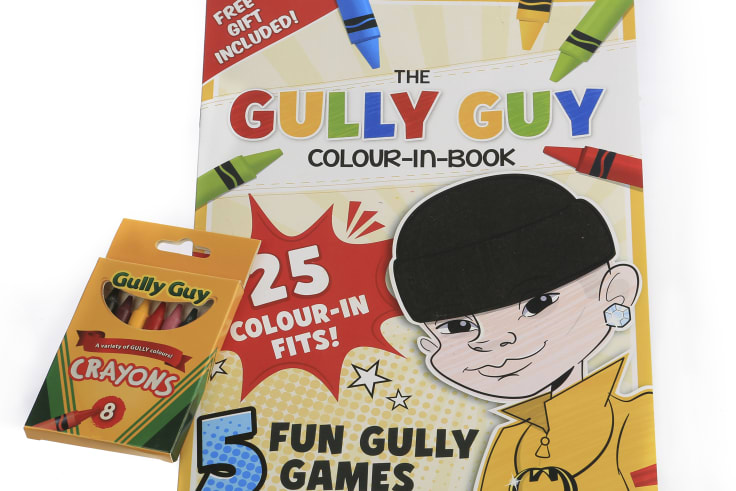 Buying merch — T-shirts, key chains, mugs — to support a band, or a favourite actress, has been a common expression of fandom for decades. And in recent years, merch has begun to infiltrate fashion on two fronts. Companies like Bravado, the merchandising arm of the Universal Music Group, have propelled traditional musician merch into the hypebeast cycle. And brands including Vetements and Balenciaga have absorbed merch aesthetics into meta-referential clothing.

Now, though, small-batch merch — a couple of dozen to a couple of thousand items — can be made available for almost anyone, from emergent social media or reality TV demi celebrities to casual dadaists who toy with the dissemination of ideas in the modern marketplace. In an era when personal branding is presumed, no following is too small to monetise.

Want to show support for Sean Bryan, aka the Papal Ninja, an American Ninja Warrior contestant and lay minister? There's a shirt (and laptop case) for that. Enthralled by the 1980s sunglasses worn by the rubber-legged teen social media star Roy Purdy in his absurdist dance videos? For a while, he sold them, too. Obsessed with Gordie, the French bulldog owned by Alex Tumay, who engineers Young Thug's records? Buy a shirt.

"I'd never pitched myself as a product to people," Tumay said. "It was kind of a sellout angle I was worried about." But he's sold around 50, and the money he took in paid for flights for him and his partners to go to the South by Southwest Music Festival in Austin last month.

At times, the micromerch comes before the notoriety. On the most recent US season of The Bachelorette, Lucas Yancey spent most of his energy screaming "WHABOOOOOOM," rather than pursuing Rachel Lindsay. Conveniently, he was already selling shirts with the phrase on his website.

In this, at least, he was ahead of the curve. Most graduates of the Bachelor ecosystem migrate into the murky worlds of paid Instagram posts and event appearances, but Ashley Iaconetti, a contestant known for persistent waterworks and committed virginity, decided to become the brand herself. "I always thought myself being so known for crying," she said. "Why don't I have a deal with Kleenex or Puffs?" 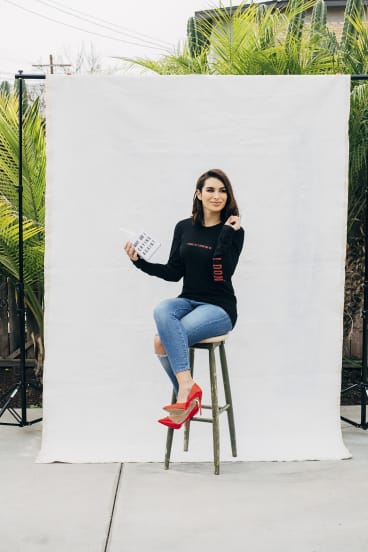 Ashley Iaconetti spun a penchant for crying into a brand.

Instead, she began selling her own tissue boxes (a printed sleeve with line drawings of Iaconetti's forlorn face over a plain white tissue box) along with other merchandise. "Snooki was Snooki, and now she's kind of her own brand," she said. "Also, Kylie lip kits subconsciously encouraged me." (Indeed, the peak micromerch endgame is something like Kim Kardashian West's Kimoji, which sells pool floats, mouse pads and Post-it notes shaped like her derriere, among other items.)

These nascent micro-personality businesses may never reach that level of name recognition or profitability, but they're something more than mere pet projects. "The easiest term is to call it a brand," Matthew Hwang of Pizzaslime said, but conceded that wasn't quite sufficient. "We almost need to come up with new words."

Pizzaslime is a creative agency specialising in creating viral moments, and also a rapid-response merchandise business specialising in capitalising on them. Early last year, a sharp-tongued teenager, Danielle Bregoli, went viral following a hilarious moment on US talk show Dr Phil where she threatened judgmental audience members to "cashmeoussidehowbowdah" (say it slow). Within two weeks, Pizzaslime had made a slew of merch for her featuring the catchphrase, including a $250 blanket featuring her face — all sold out. 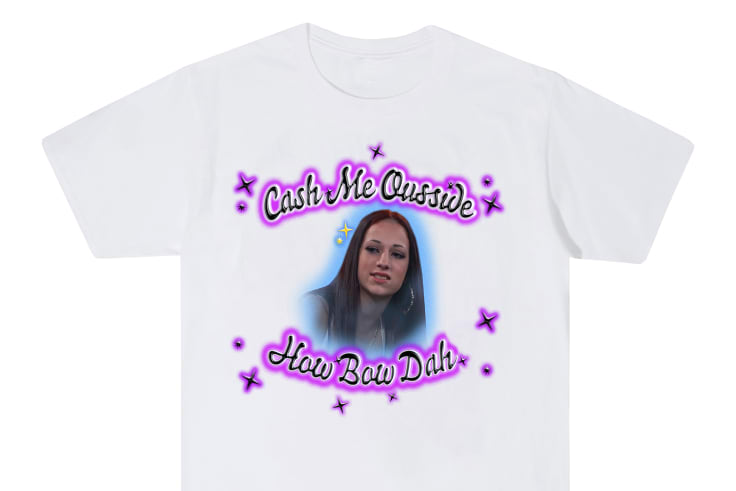 "When anyone is smart enough to build a following on social media, strategic in the ways they build their content, they can utilise those same sort of strategies for merchandise," Hwang said.

Which raises the question of what the smallest following a person can have while still being able to sell merchandise can be. "I've worked with people who have 10 million Instagram followers and they've done less than someone with 20,000," said Chase Ortega, who owns the Hyv (pronounced "hive"), a merchandise company that primarily handles emerging musicians, but which has employed the same infrastructure to service merch for several non-traditional clients, including feminist artists Grace Miceli and Molly Soda,  social media star Too Poor (an ex-girlfriend of Lil Peep and something of a modern-day Nancy Spungen) and the surrealist comic artist Zack Fox.

"I think of it as a new record label. I'm not trying to be Bravado," Ortega said. "I want to be the Matador. I want a cool roster."

That frees him up him to sell, with Fox, a couple of hundred water bottles emblazoned with a reclaimed bigoted phrase (that can't be published here) derived from a Twitter meme.

For Fox, merch isn't strictly about celebrity. "I've always leaned more into making things artistically valid to me," he said. In buying the water bottle, he explained, "you're buying a piece of performance; you're not really trying to rep Zack Fox." 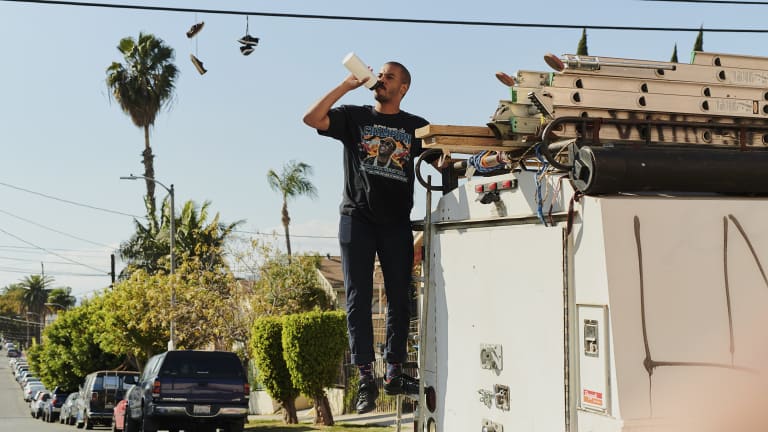 Surrealist comic artist Zack Fox with one of his water bottles.

That tension between the intentions of the purchaser and creator also intrigues Ayesha Siddiqi, a creative consultant specialising in trend forecasting with a robust Twitter following, who in partnership with the artist and musician Saba Moeel recently collaborated on the design of a collection of shirts and hoodies. Some are drawn directly from Siddiqi's tweets, like the hoodie that reads Spider Labor Solidarity.

"It means what it says — that my solidarity is with the workers, especially those who work quietly and alone and for the benefit of all those around them," Siddiqi wrote in an email.

But even though they weren't intended as personal merch, some people have been buying them, she said, "because they were fans of ours to begin with and liked the opportunity to support something we'd made."

In some cases, micromerch may be the pretense for providing an undersupported creative with some revenue, a cousin of Patreon subscriptions or Twitch micro payments. For Fox, selling merchandise has provided an alternate revenue stream, and one with ideological punch.

"The idea is a seed, and it's always going to upstream to someone making money off it," he said. "Me selling this stuff is a way to, in one moment, protect the idea and also give myself what's due."

It can also be a way to extend a moment that might otherwise be fleeting, give it physical form so that it might travel far beyond where it began. And it can lead to bigger things. Recently, Mandella was tapped by Converse to help reintroduce the One Star sneaker. On his Instagram, he posted a photo of himself inside a bus covered in a five-metre-high photo of him. Who's micro now?

The Masked Singer: Daisy May Cooper and Claire Richards are unmasked