‘She was one of my favourite people, full stop:’ Nick Grimshaw pays a heartfelt tribute to Caroline Flack after her death… as he pleads with listeners to ‘reach out if they’re struggling’

Nick Grimshaw has paid an emotional tribute to Caroline Flack following her death on Saturday.

Speaking on his Radio 1 show, the DJ, 35, described the presenter, 40, as ‘one of his favourite people,’ as he recalled learning the ‘really brutal’ news of her death.

Nick them pleaded with his listeners to ‘reach out if they’re struggling,’ and ended his tribute by sending his love to Caroline’s friends and family. 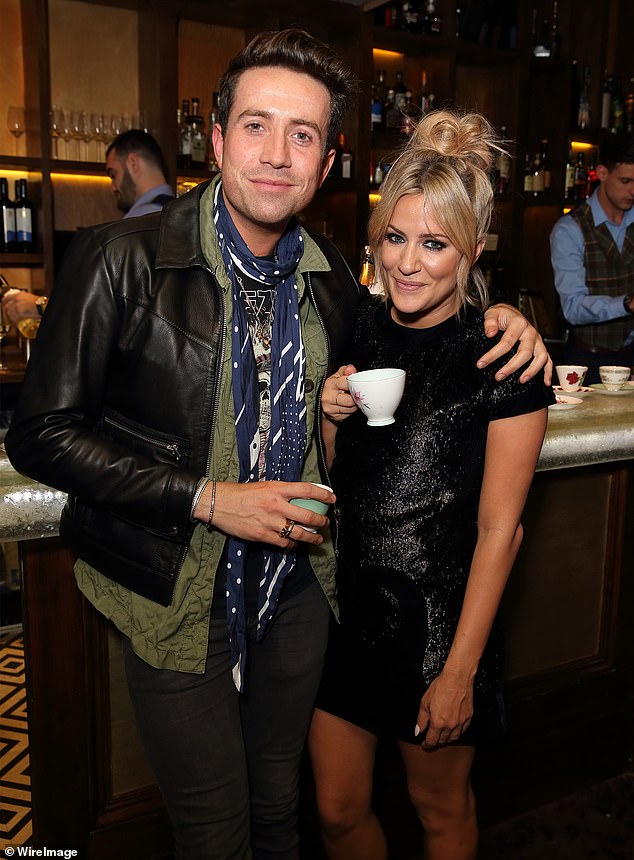 ‘She was one of my favourite people’: Nick Grimshaw has paid an emotional tribute to Caroline Flack following her death on Saturday (pictured together in 2015)

Speaking at the start of his show Nick’s voice cracked with emotion as he paid tribute to Caroline following her death.

He said: ‘I just wanted to start the show by saying something about our friend, Caroline. I just feel really weird today, I feel really sad. I’m obviously very shocked about what happened this weekend.

‘I know a lot of you listening were also big fans of Caroline. It’s been very tough for me and her friends, anyone who knew her personally. And anyone who enjoyed watching Caroline and seeing her on the telly and hearing her here on Radio 1.’ 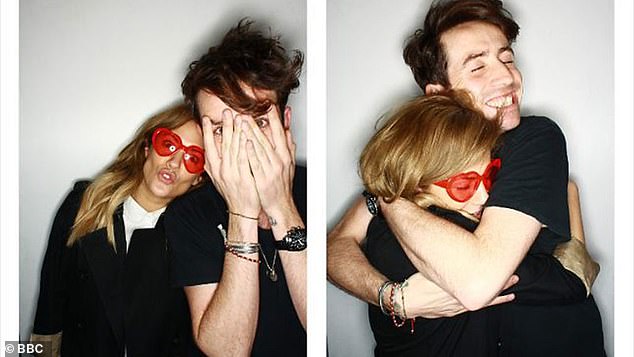 Sad: The DJ paid tribute to Caroline on his Radio 1 show on Monday, describing the news of her death as ‘really brutal’ (pictured following an appearance on his show)

Nick then re-iterated Caroline’s statement to ‘be kind,’ adding: ‘I think it’s a good lesson for all of us. You never know what someone is going through.

‘So I think kindness is key, and I think the other thing we can take from this is to take care of your mental wellbeing, I think it’s so important.

‘So if you are struggling, or going through anything, or having a hard time, I think the best thing you can do is just reach out and talk to someone, it really helps.

‘There’s a tendency to think you’re alone, or a crazy person, but you’re not. And the reality is, most people struggle and feel down from time to time, I know I do, and talking to people is key.

‘So I think those are the lessons we can learn from this, being kind to one another and speaking to someone if you need it.’ 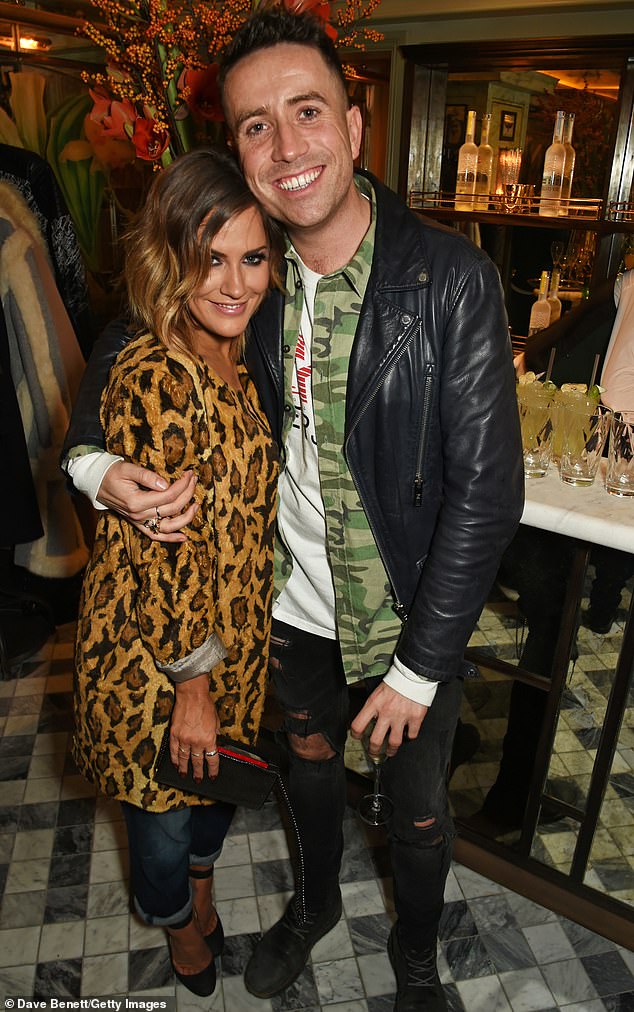 Pals: Nick and Caroline worked together on 2015’s The X Factor, which she hosted alongside Olly Murs while he appeared on the judging panel (pictured in 2016)

Nick finished his tribute by sending love to Caroline’s friends and family, and admitted he struggled to choose which song he could play as a tribute to Caroline.

The presenter then said he settled on a track that reminded him of his pal, Escape (The Pina Colada Song) by Rupert Holmes.

Nick and Caroline worked together on 2015’s The X Factor, which she hosted alongside Olly Murs while he appeared on the judging panel.

Caroline took her own life after a worried friend who was staying with her went to the shops, leaving the ex-Love Island presenter alone at her London flat.

It came just hours after she was told she would face trial for allegedly assaulting her boyfriend Lewis Burton, something she denied.

Her management have slammed the Crown Prosecution Service (CPS) for pursuing the ‘show trial’ after Lewis said he did not want to press charges. 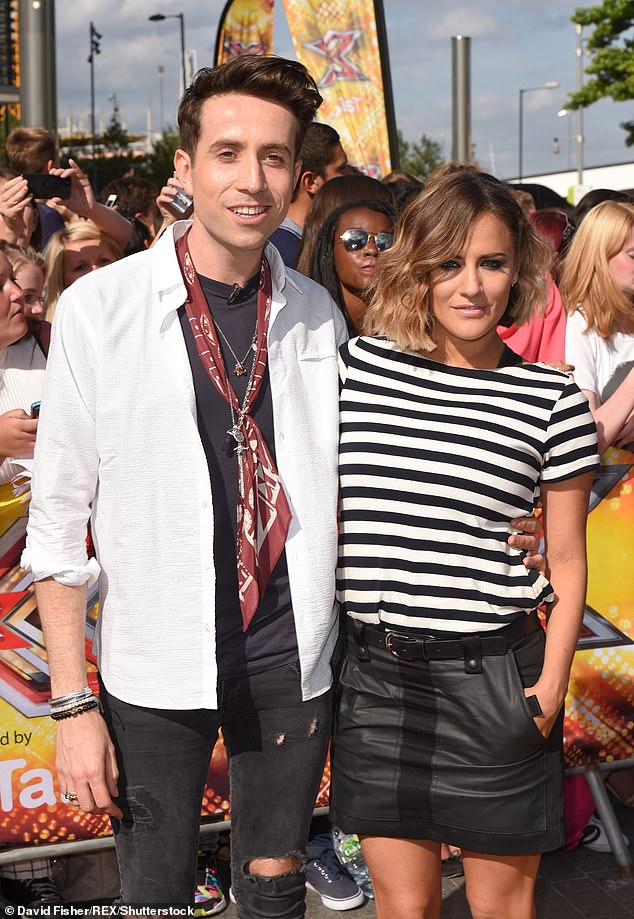 Close bond: Nick finished his tribute by sending love to Caroline’s friends and family, and played a song that reminded him of her (pictured in 2015)

Caroline had been described by friends as feeling ‘she was on her own’ and ‘couldn’t see a way out,’ according to The Mirror.

The TV presenter’s death was confirmed by a lawyer for the family. The Flack family said in a statement: ‘We can confirm that our Caroline passed away today on the 15th February. We would ask that the press respect the privacy of the family at this difficult time.’

A worried producer friend had been staying with the star but found she couldn’t get back into her flat after returning from the shops, a source said. She called Caroline’s father Ian who gained entry to the flat where he found the star’s body.

If you have been affected by this story, please call the Samaritans on 116 123 or visit www.samaritans.org.

CAROLINE FLACK: A CALL FOR HELP?

Caroline Flack spoke often about her struggles, both in interviews and on social media. 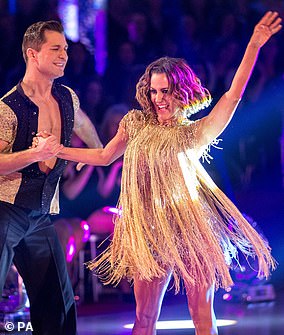 The Strictly Come Dancing 2014 winner has said that she felt depressed following her victory on the BBC show.

After she won the series along with professional partner Pasha Kovalev, she admitted that she felt like she was ‘being held together by a piece of string which could snap at any time’.

In an unearthed interview cited by the Daily Star following her death, Caroline claimed that, ‘It all started the day after I won Strictly. I woke up and felt like somebody had covered my body in clingfilm. I couldn’t get up and just couldn’t pick myself up at all that next year.’

She went on: ‘People see the celebrity lifestyle and assume everything is perfect, but we’re just like everyone else. Everyone is battling something emotional behind closed doors – that’s life. 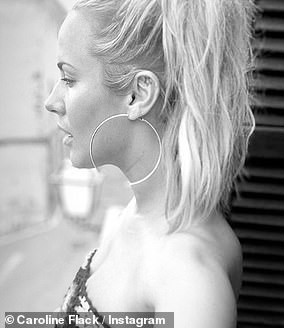 Ignored? ‘When I actually reached out to someone they said I was draining,’ Caroline admitted in October 2019

‘BEING A BURDEN IS MY BIGGEST FEAR’

In an Instagram post she uploaded on 14  October 2019 – to mark World Mental Health Day – Caroline captioned a photo of herself: ‘Some days it’s hard to write your feelings of your not in the right place.

‘The last few weeks I’ve been in a really weird place… I find it hard to talk about it… I guess it’s anxiety and pressure of life… and when I actually reached out to someone they said I was draining.

‘I feel like this is why some people keep their emotions to themselves. I certainly hate talking about my feelings. And being a burden is my biggest fear…

‘I’m lucky to be able to pick myself up when things feel s**t. But what happens if someone can’t. Be nice to people. You never know what’s going on. Ever.’ [sic] 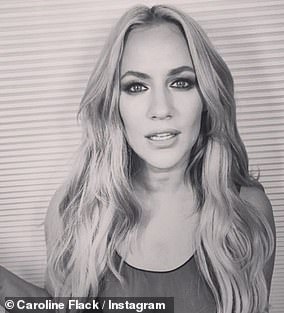 Signs of suicide? She liked tweets about calling The Samaritans over Christmas

Caroline was told to stay off social media following her assault charge in December 2019.

However, she notably liked a string of tweets in the days afterwards, before Christmas, encouraging those feeling lonely over the holidays to seek help.

The tweets – posted by the likes of actress Sheridan Smith, journalist Stacey Dooley and comedian Luke Kempner – included the telephone number for The Samaritans’ suicide hotline.

She also posted to Instagram around the same time: ‘This kind of scrutiny and speculation is a lot to take on for one person to take on their own… I’m a human being at the end of the day and I’m not going to be silenced when I have a story to tell and a life to keep going with…

‘I’m taking some time out to get feeling better and learn some lessons from situations I’ve got myself into to. I have nothing but love to give and best wishes for everyone.’

It was reported that Caroline had decided to write a book, during her recent time off.

‘Caroline has found the process incredibly cathartic,’ one of her friends told the Mail. ‘She wants it to be more than just a story about her. She wants to talk about the problems she’s encountered and how she’s overcome them.

‘She hopes to be able to help others who may be going through similar difficulties. Part self-help, part memoir is the style that Caroline is looking for.’

Brooke Shields tracks her daughters: ‘If they turn it off I will make their life miserable’

Lauren Goodger shows off her incredible curves in tight jeans