Rhian Sugden slipped her slimline frame in a busty two-piece on Sunday for a sultry Instagram snap.

The model, 33, looked pleased with herself as she snapped the image, modeling aquamarine lingerie to show off her svelte physique.

Tousling her dark blonde mane, Rhian displayed her toned waist and ample assets, as well as a flawless complexion, accentuated with deep mascara. 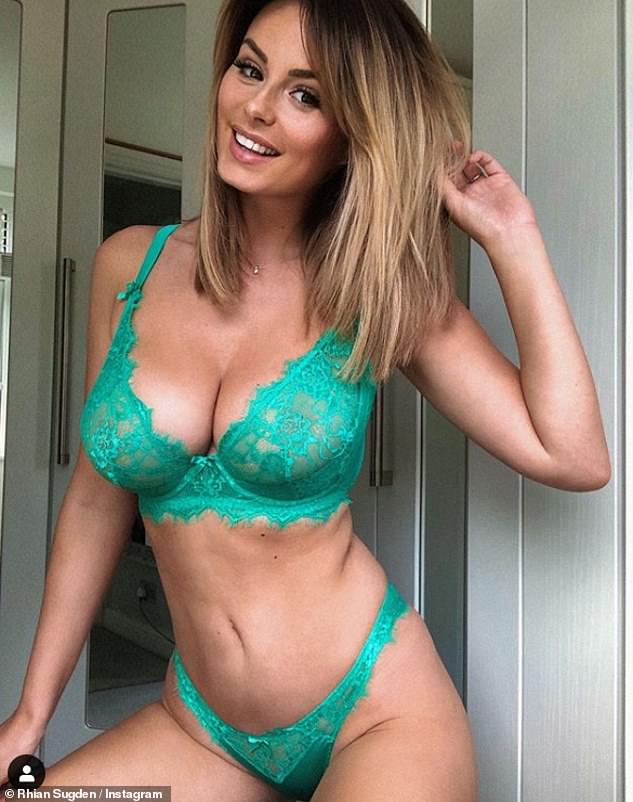 Looking good: Rhian Sugden slipped her slimline frame in a busty two-piece on Sunday for a sultry Instagram snap

Rhian was at it on Wednesday too, as she slipped into green lingerie from Rhianna’s clothing range Fenty to take a sizzling snap.

She showed off her cleavage in the plunging bra which was adorned with the Fenty logo.

The television personality captioned the snap: ‘New undies from @savagexfenty’.

Later in the day, Rhian took to her Instagram stories to share a make-up free snap of herself lying in bed. 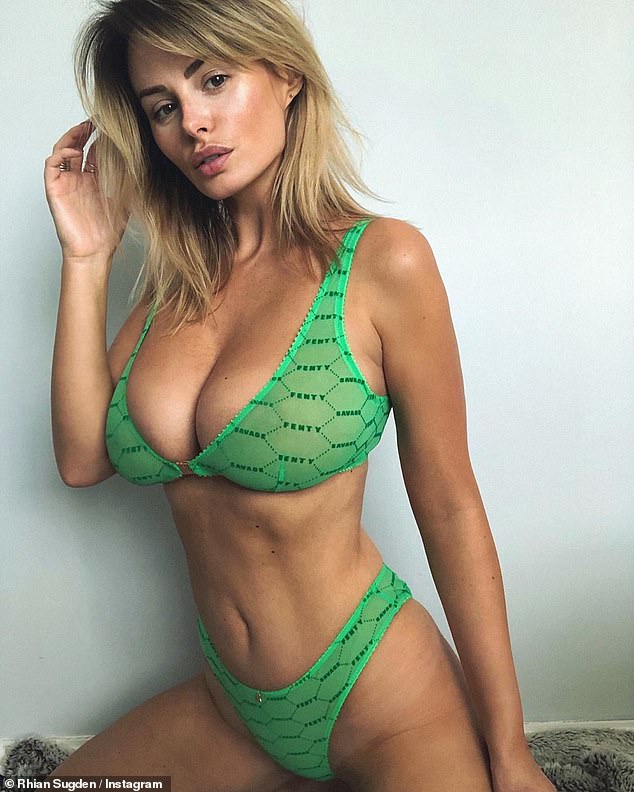 Green with envy: Rhian put on a busty display as she slipped into sheer green lingerie from Rihanna’s Fenty clothing line for an Instagram snap on Wednesday 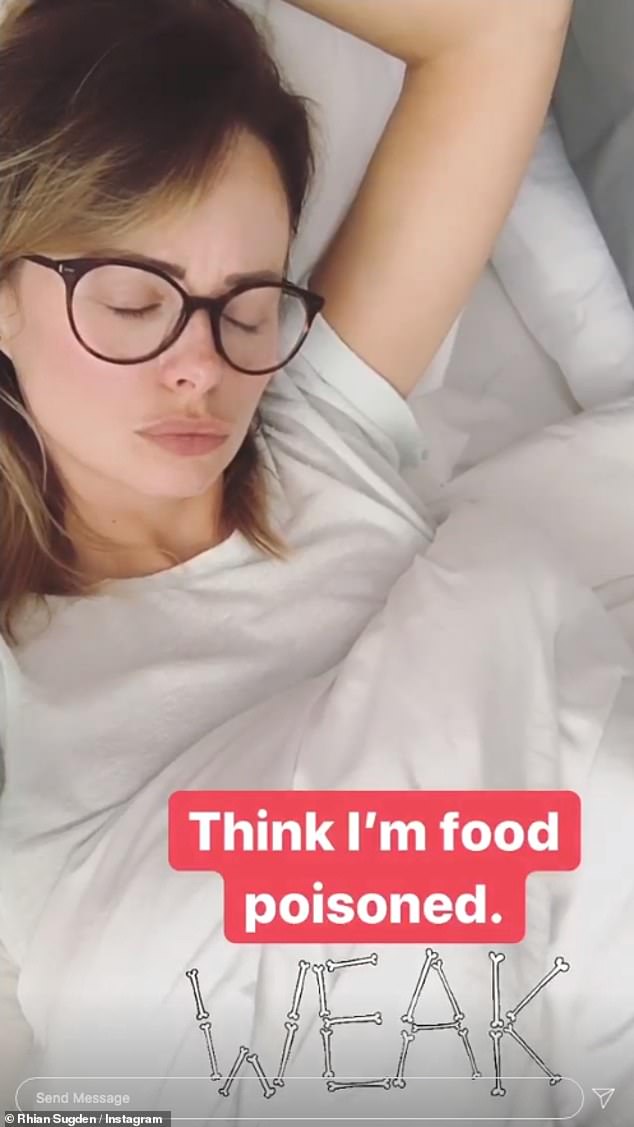 ‘Think I’m food poisoned’: Later in the day, Rhian took to her Instagram stories to share a make-up free snap of herself lying in bed

She wrote atop of it: ‘Think I’m food poisoned. Weak.’

Rhian’s sultry post comes after the model featured on the new documentary Page 3: The Naked Truth, and she spoke about the drama between her and Vernon Kay earlier this month.

Rhian appeared on the Channel 4 documentary to talk about her experience in the industry.

Yet talk soon turned to her ‘sexting scandal’ with married Vernon, 46, in 2010 and she admitted it was the lowest point of her life. 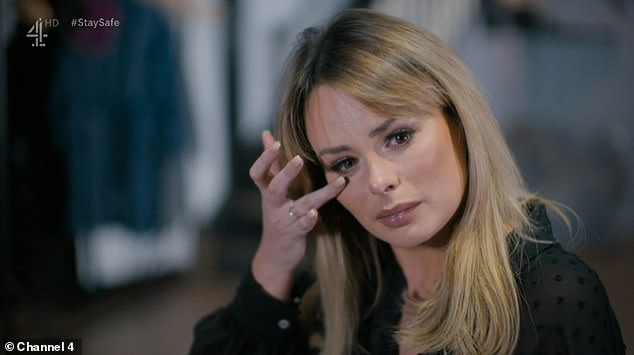 Candid: Rhian’s sultry post comes after she spoke about the 2010 sexting drama between her and Vernon Kay in a documentary aired earlier this month

Rhian lamented the fact that the presenter ‘got away with it’ after publicly apologising to wife Tess Daly, 51.

The model said: ‘There was an attraction there for both of us. I was a Page Three girl and he was Vernon Kay. He’s a good looking fella.

‘He came to Manchester and that was the first night we’d met. Things just stemmed from there.

‘It was all probably more bravado on text from him when he’d had a drink, “Oh, you look fit in that picture, sexy, wish I could see you more.”‘ 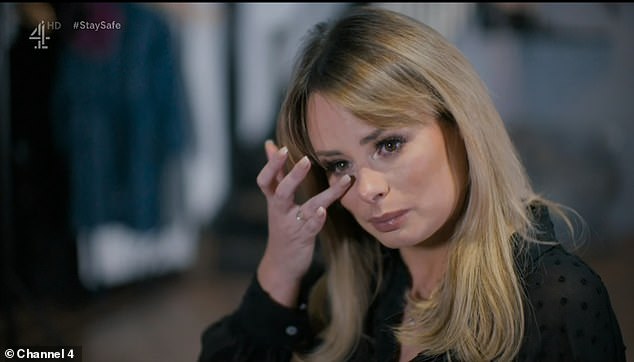 Emotional: Rhian lamented the fact the presenter ‘got away with it’ after publicly apologising to wife Tess Daly, 51

Rhian then spoke about the backlash after their texts were exposed, she said: ‘If I’d met this man, slept with him and had a full blown affair with him then I would understand the backlash. It was like I’d literally killed somebody.’

She then started crying as she recalled how her career was ruined and she had gone from having £15,000-a-month in her bank account to nothing.

Wiping away tears, the model, who is now married to soap actor Oliver Mellor, said: ‘I lost so much weight from stress. I have never been so low, apart from that time. It makes me upset. I am going to ruin my make-up.

‘It was awful, my whole family… they must have been so embarrassed. He just got away with it, it ruined everything for me. I was going up and up with my career, when that came along. I wish I had never met him.’

She emotionally added: ‘He got to give an apology on the radio and just got to carry on with Family Fortunes, ironically. It still makes me feel physically sick.’ 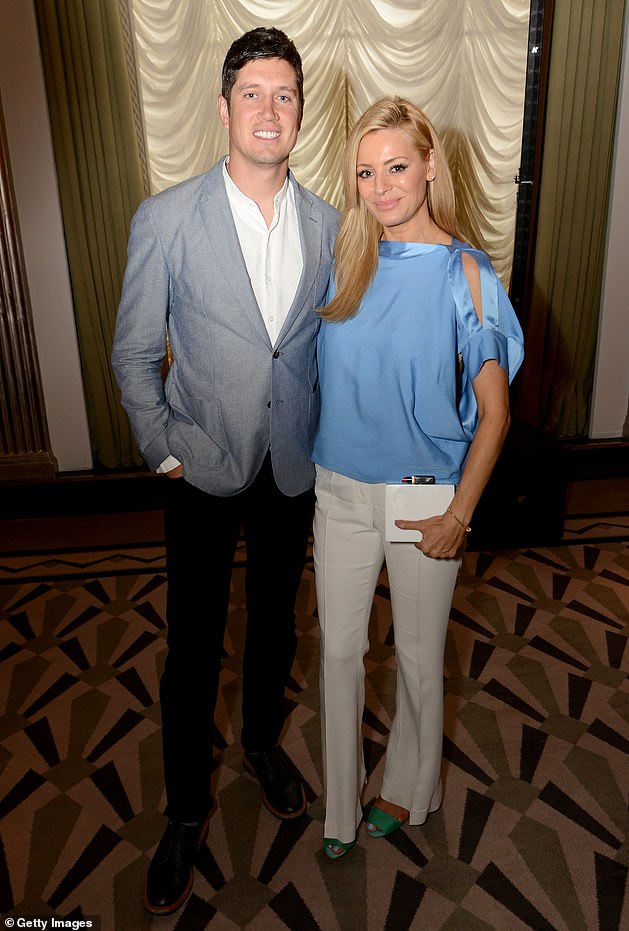 Apology: Vernon was famously forced to make a public apology to his wife Tess on BBC Radio 1 bafter a set of their saucy messages came to light (Vernon and wife Tess pictured in 2015)