They recently announced they are expecting their second child.

And Ronan Keating, 42, looked dapper in a black suit as he stepped out with his wife Storm at the 13th Emeralds & Ivy Ball in partnership with Cancer Research UK and The Marie Keating Foundation at Old Billingsgate in London on Saturday.

The fashion designer, 38, showed off her blossoming baby bump in a gorgeous blush pink strapless dress as she posed alongside her husband on the red carpet. 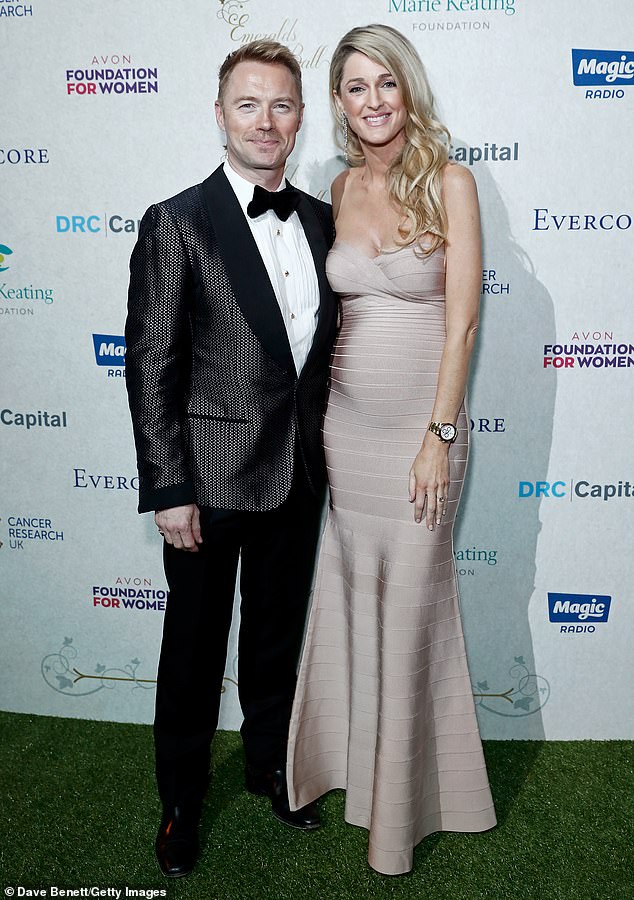 Dream team: Ronan Keating’s pregnant wife Storm showed off her baby bump in a pink gown as they stepped out for the 13th annual Emeralds & Ivy Ball in London on Saturday

Storm accessorised with stunning long drop earrings, and capped off the look by wearing a silver watch.

Her golden tresses were styled into delicate waves that fell around her bare shoulders, and she wore a natural palette of make-up for the occasion.

Completing her look, Storm added height to her frame and towered above her Irish husband in a pair of heels.

It was like father like son as their two-year-old son Cooper donned a suave tuxedo, just like his Boyzone legend father Ronan, while they presented on stage together. 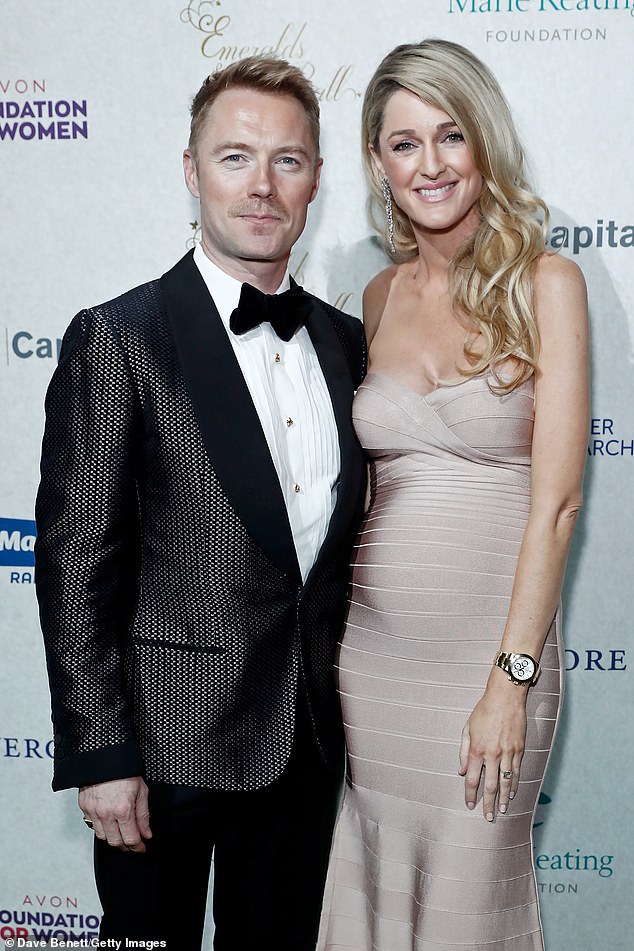 Glamorous: Storm accessorised with stunning long drop earrings, and capped off the look by wearing a silver watch 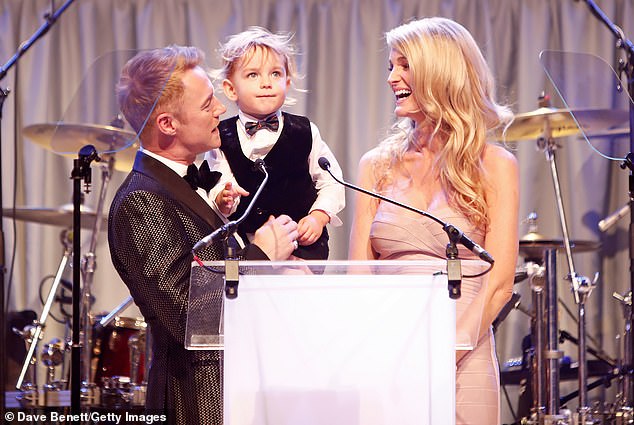 Happy family: It was like father like son as their son Cooper, two, donned a suave tuxedo, just like his Boyzone legend father Ronan, while they presented on stage together 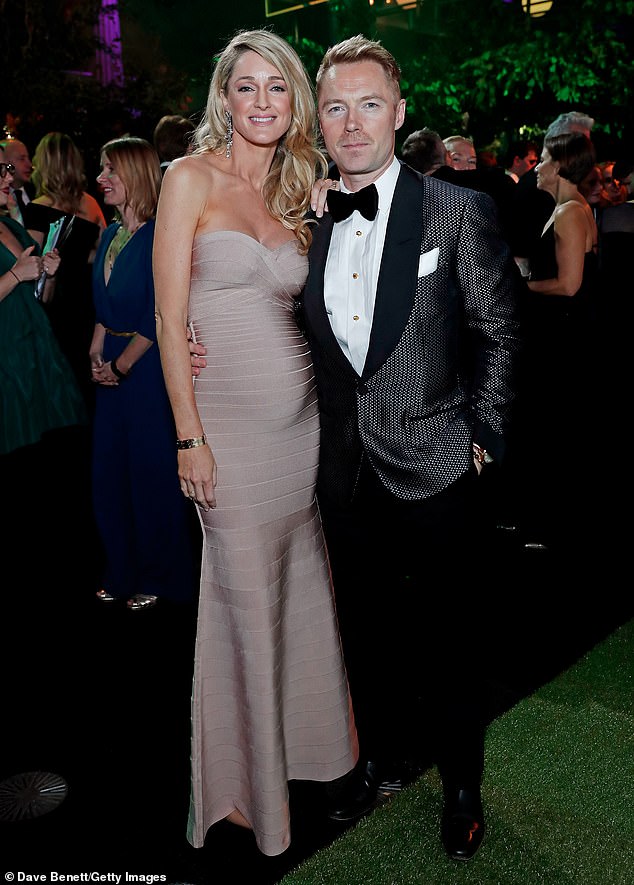 Mr and Mrs: Ronan and Storm were every inch the beaming parents-to-be as they made a glamorous arrival at the charity event 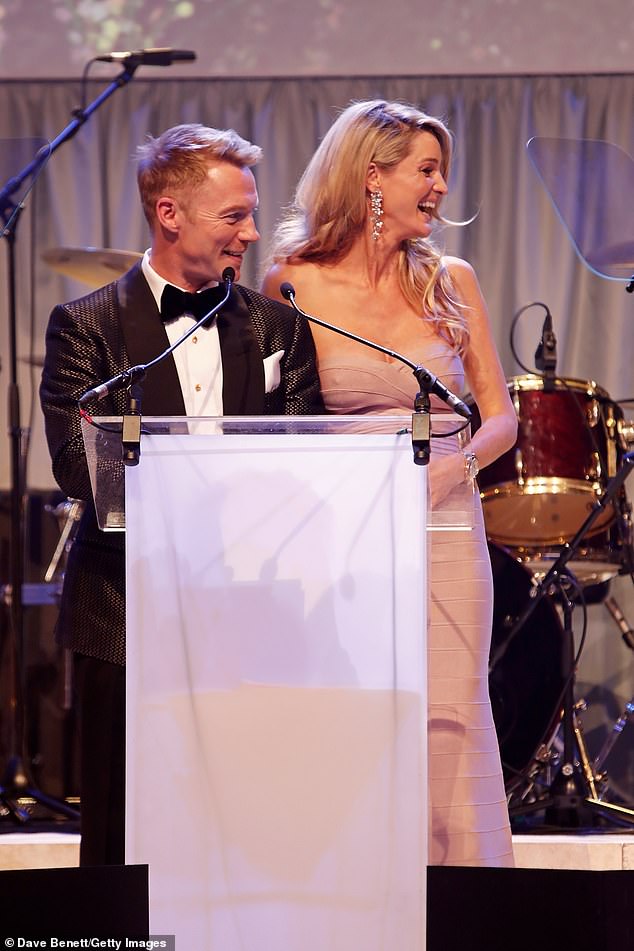 Sweet: The couple also took to the stage together for the glitzy charity event, after announcing their exciting baby news 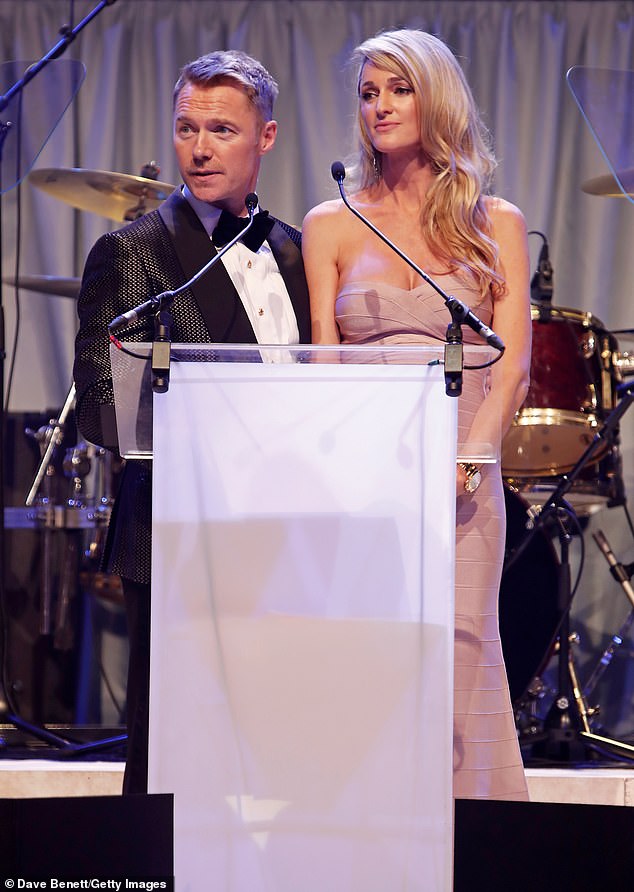 Lovely: The couple were among the many stars in attendance for the occasion 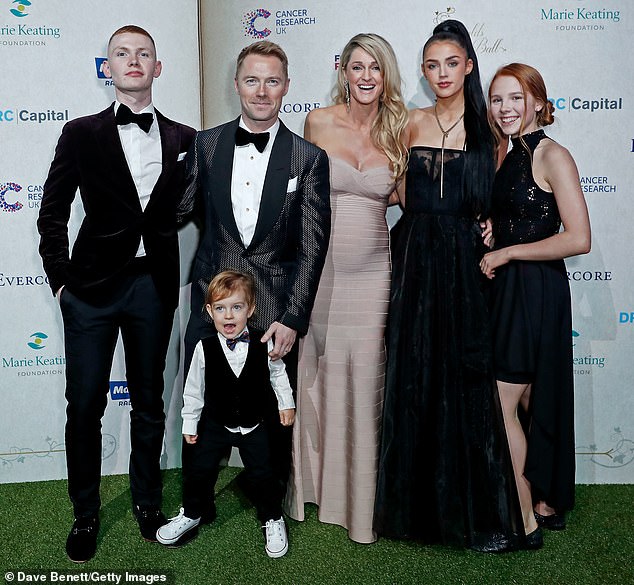 Family time: Ronan was joined by his sons Jack, 20, Cooper, and daughters Missy, 18, and Ali, 14, alongside his wife for the evening

While the little one tossed the jacket to one side, his father took the stage in a glitzy sequined dinner jacket complete with a black bow tie.

The event was A-lister laden with the likes of Mike and Zara Tindall revelling in the atmosphere alongside Chief Executive of Cancer Research UK Michelle Mitchell and Deborah James, Zak Johnson, Charli Fisher and Victoria Clay.

Ronan is well-known for his philanthropy and his compere gig alongside his wife comes after they announced her pregnancy on Good Morning Britain late last month.

The Australian designer showed off her blossoming baby bump for the first time in an Instagram post. 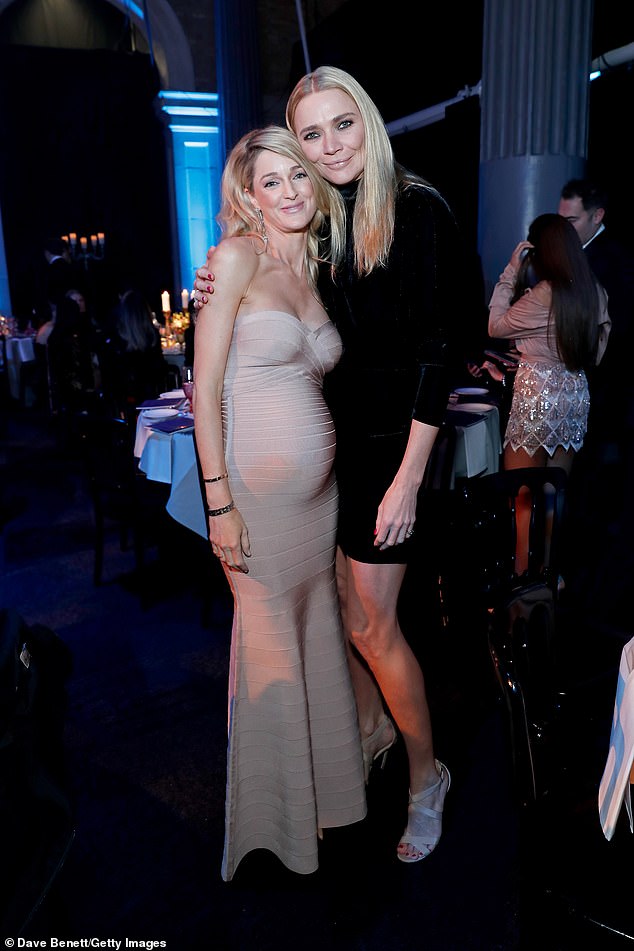 Picture perfect: Inside the event Storm also posed with model Jodie Kidd, who put on a leggy display in a black mini dress

Warm embrace: The event was A-lister laden with the likes of Mike and Zara Tindall revelling in the atmosphere and even seen in a warm embrace with both Ronan and Storm 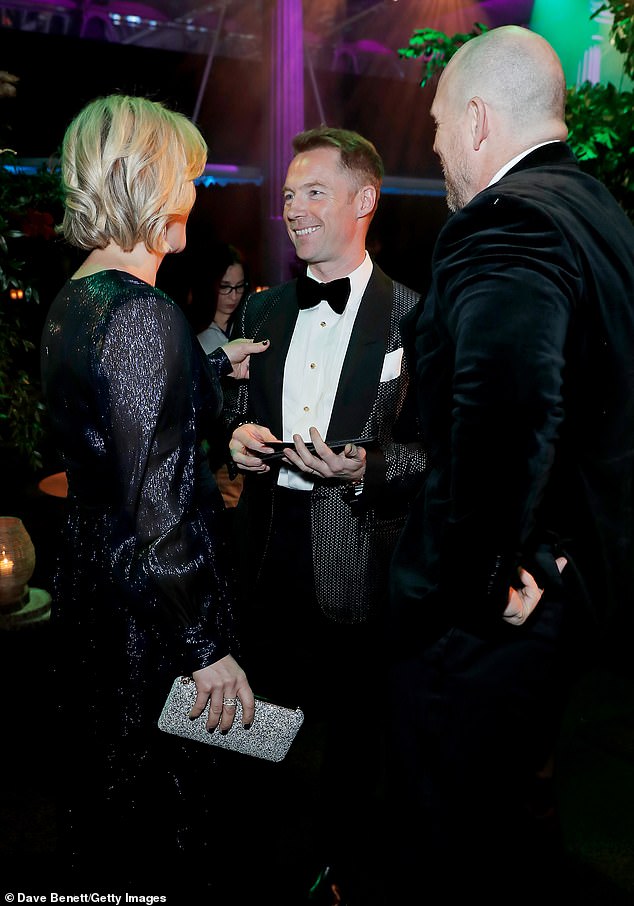 Friends in high places: Ronan enjoys a chat with Zara Tindall, the daughter of Princess Anne and Mark Phillips and the eldest granddaughter of Queen Elizabeth II, and her husband Mike

Storm shared an adorable snap with her son Cooper kissing her baby bump as she announced: ‘Another little Keating on the way’.

Storm was immediately flooded with congratulations by her celebrity pals, with Denise Van Outen and Vogue Williams quick to pass on their well wishes.

As Piers ribbed him by stating ‘when you say “we”, you mean Storm’s pregnant…’ Ronan jumped in, quipping ‘Some mornings I get up and I feel I am!’ 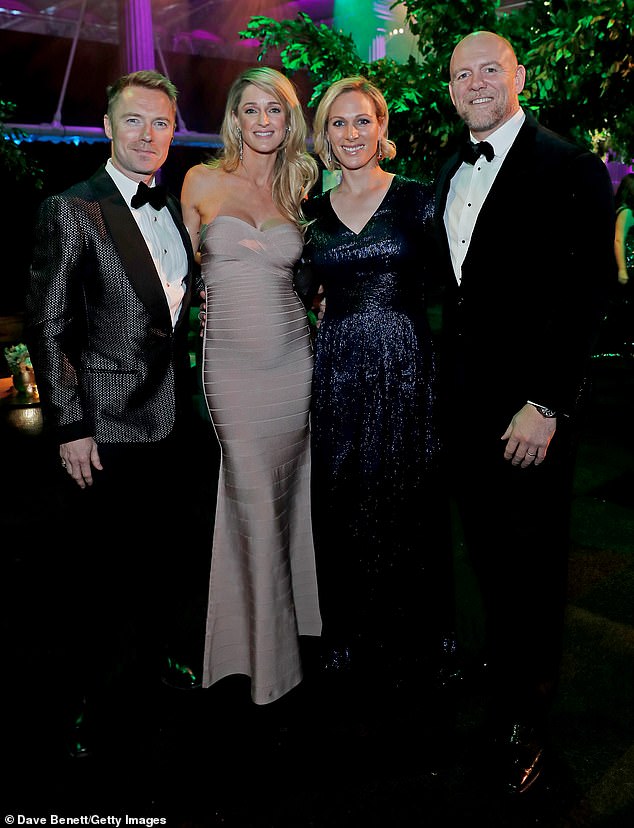 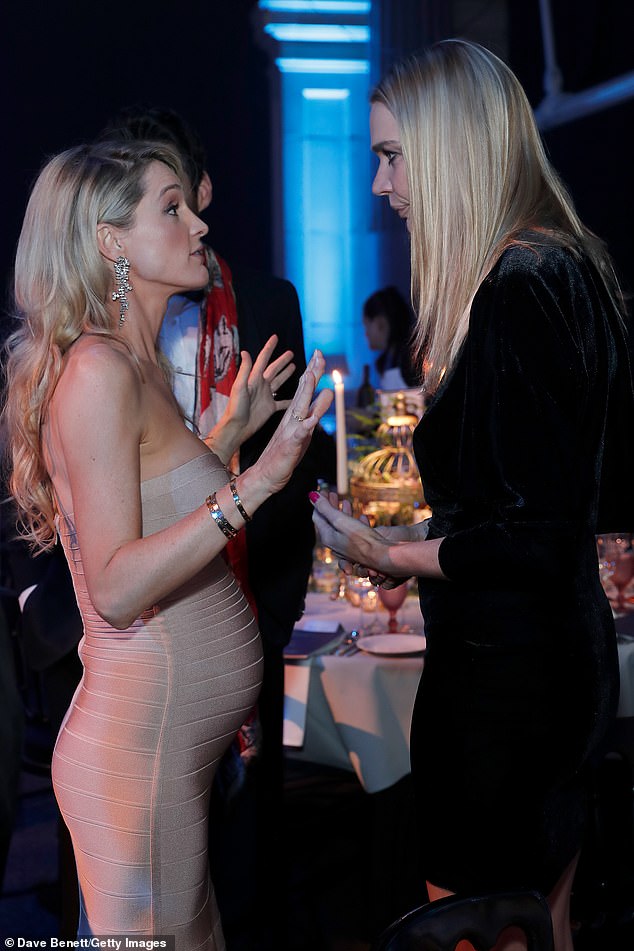 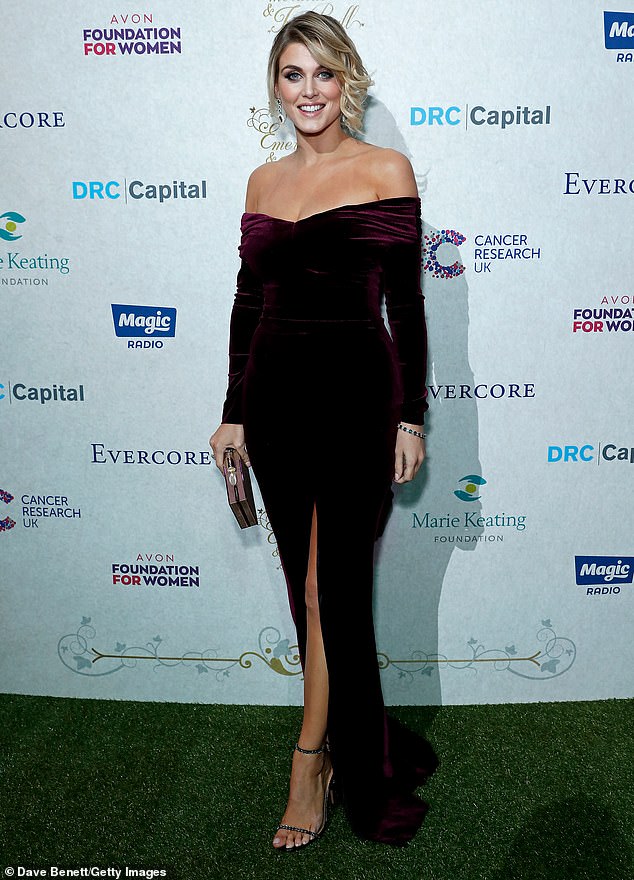 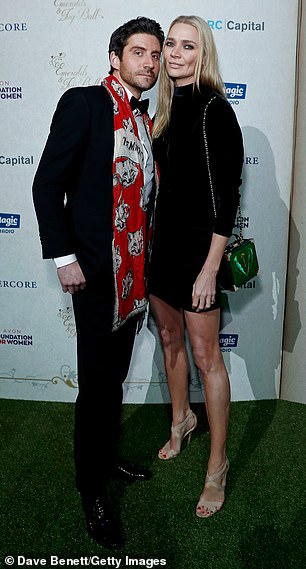 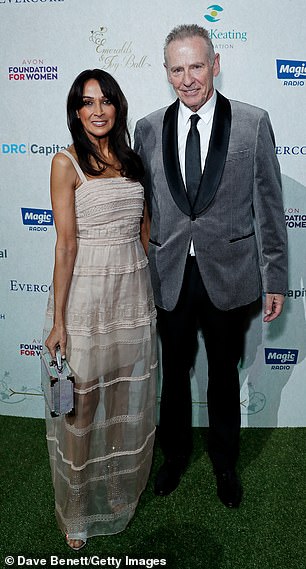 Ronan added on his Magic Radio Breakfast show: ‘Storm and I are having a baby! It’s really exciting. She’s feeling great.’

Ronan and Storm’s baby news may come as a shock to fans as they recently admitted that although they wanted to have more children, they were concerned about their busy schedules.

The Boyzone singer and the Australian designer welcomed son Cooper in April 2017, two years after tying the knot in a stunning outdoor ceremony in Scotland. 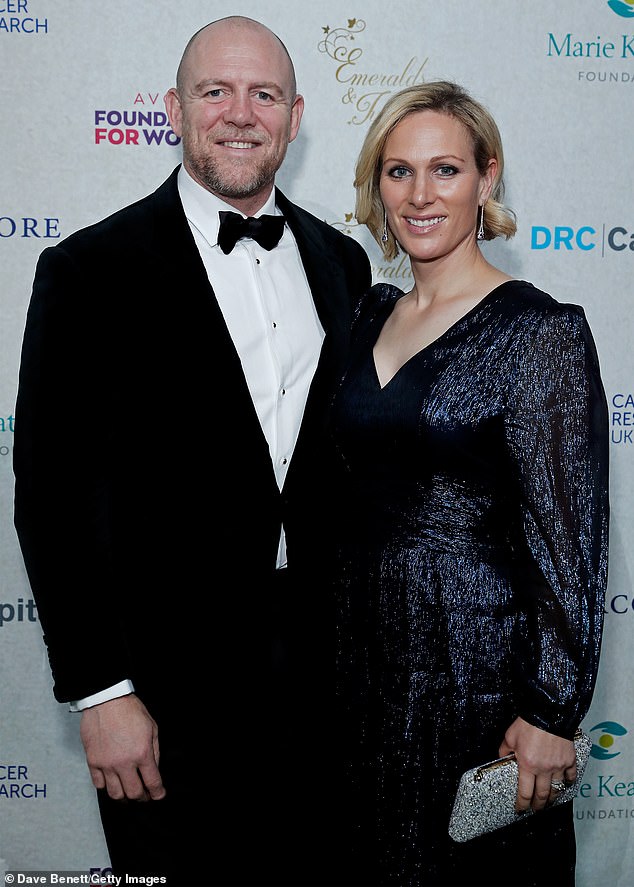 Royalty: Mike and Zara Tindall put on a loved-up display as they arrived at the event 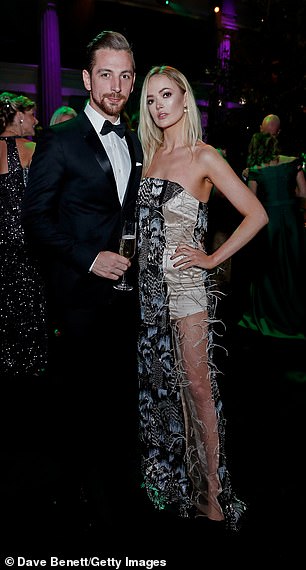 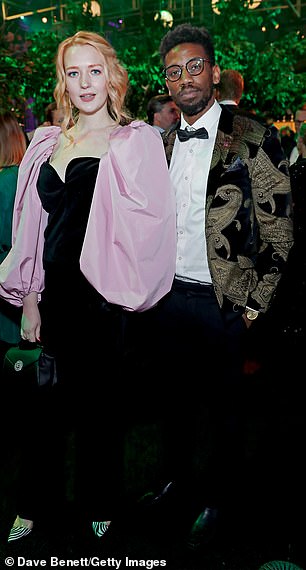 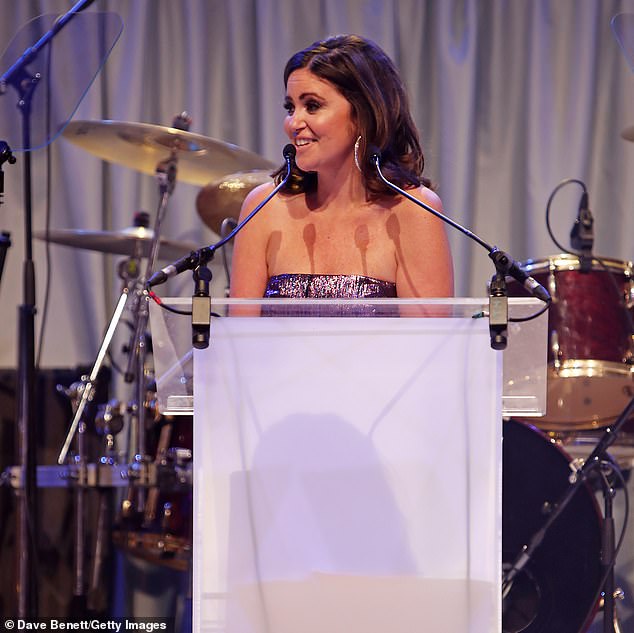 Beaming: Author Deborah James, who wrote F*** You Cancer: How to Face the Big C, Live Your Life and Still be Yourself, takes the stage during the evening 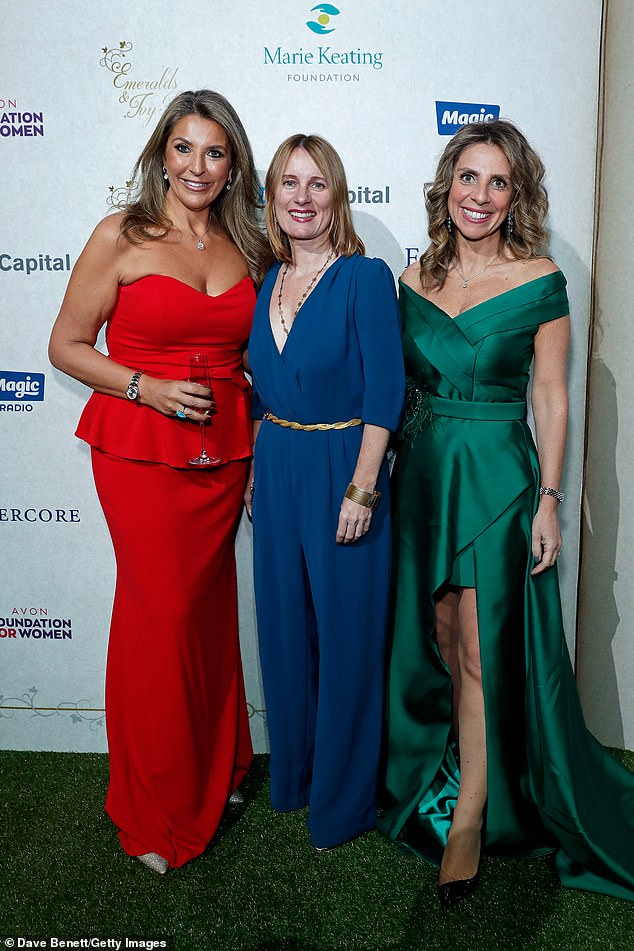 Belles of the ball: (L to R) The Apprentice’s Claudine Collins, Chief Executive of Cancer Research UK Michelle Mitchell and Nicola Mendelsohn also made an appearance

Victoria shares snap of Harper in her 'favourite floral dress'

Kim Kardashian and Kanye West 'jet to Caribbean to save marriage'