SEBASTIAN SHAKESPEARE: Music on menu for singer and chieftain's heir

SEBASTIAN SHAKESPEARE: Sweet music on the menu for X Factor star and chieftain’s heir as they crusade to let musicians perform when pubs and restaurants reopen

She is the mixed-race singer from Liverpool who had been a teenage mother before bursting to stardom on The X Factor. He is the society restaurateur who’s in line to become the 25th Chief of Clanranald and can trace his forebears to the 3rd century.

But, improbable allies though they may sound, I can disclose that Rebecca Ferguson and Ranald Macdonald are standing shoulder to shoulder in a crusade to let musicians perform in pubs, bars and restaurants after they reopen on Saturday.

‘We cannot allow musicians to be overlooked,’ Ferguson tells me. ‘Every citizen deserves to be able to work.’

The singer has spoken out after learning of the innovative measures which Macdonald is taking at Boisdale, his restaurant in London’s Belgravia which reopens next Wednesday. 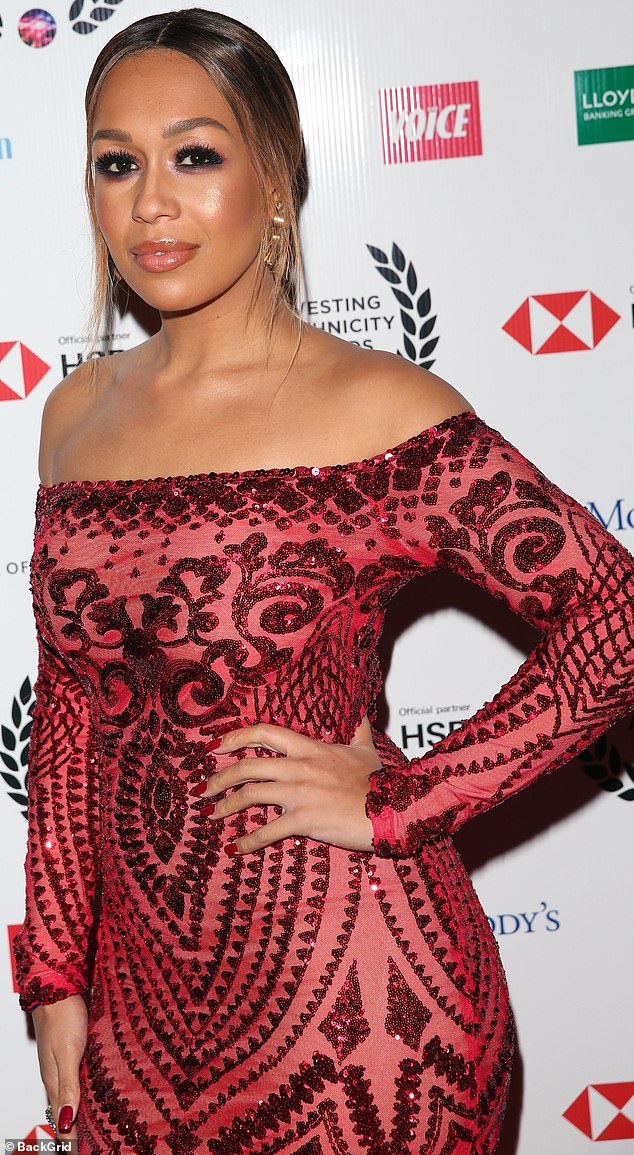 Improbable allies though they may sound, I can disclose that Rebecca Ferguson (pictured) and Ranald Macdonald are standing shoulder to shoulder in a crusade to let musicians perform in pubs, bars and restaurants after they reopen on Saturday

‘I believe the precautions Boisdale are putting in place — with Perspex screens separating the band from the public — allow for two things,’ explains Ferguson, who has performed two ten-day residences at the restaurant. ‘First, people to stay in employment, and, secondly, the enjoyment of music by the customer.’

Macdonald, who has lured everyone from Jools Holland — the restaurant’s Patron of Music — to Mel C to perform in the past 21 years, is heartened by her support. ‘The guidelines [banning live music] seem to have been rushed through,’ he tells me, pointing out that they mean that ‘recorded music, at a volume that doesn’t cause customers to raise their voices’ is deemed acceptable, while live music — ‘at the same volume’ — is not.

This, he says, is catastrophic for performers. ‘We employ more than 1,000 musicians a year. A lot of quite brilliant musicians are now on Universal Credit.’

His installation of a floor-to-ceiling Perspex screen allows vocalists and fellow musicians — socially distanced, of course — to perform without risk to those dining on 28-day aged Buccleuch beef and other Boisdale staples. Ferguson is thrilled. ‘I can’t wait to be back as a performer — or customer,’ she tells me. 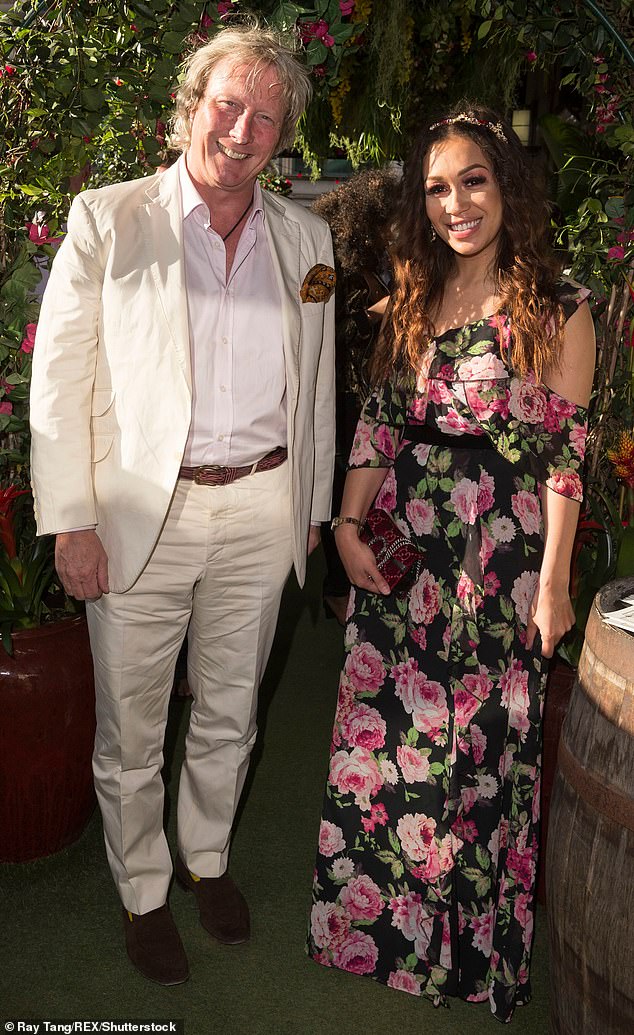 The singer (right) has spoken out after learning of the innovative measures which Macdonald (left) is taking at Boisdale, his restaurant in London’s Belgravia which reopens next Wednesday

There’s a price to pay for starring in a Harry Potter movie, as Sir Kenneth Branagh found. ‘Once you’ve been in a Potter film, there’s suddenly this vast audience you never had before. I was at Grand Central Station in New York and this little lad almost fell over and came up to ask for my autograph.’

Kirstie: I can’t wait to get back on telly

Kirstie Allsopp is itching to get back onto our screens.

She tells me: ‘Like all of us, I’m just waiting until everyone can resume their various jobs, I’m longing to get back to work.

‘In March when all this happened, I had a diary that was full until December and now it’s completely tattered.’

‘I am just desperate to get back. In the first part of lockdown I was filming and so I didn’t have such an acute awareness of what it’s like to be not filming.’

Perky TV star Georgia ‘Toff’ Toffolo admits that with fewer nightclub tables on which to dance during lockdown, she’s had to find new ways to move her body.

And it seems jumping around outside does the trick. The 25-year-old I’m A Celeb . . . winner demonstrated her skills next to a running track in London.

‘Exercise has lifted so many of my worries, and dare I say it is making me happy,’ she explains with this picture online. 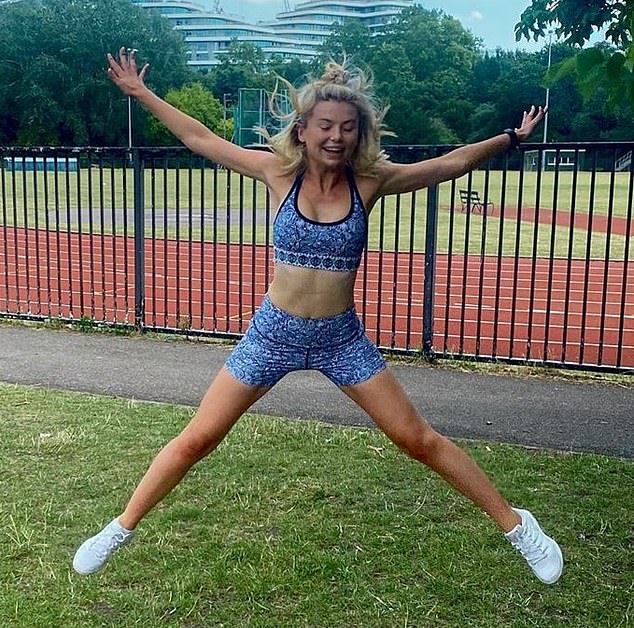 It seems jumping around outside does the trick. The 25-year-old I’m A Celeb . . . winner demonstrated her skills next to a running track in London

Princess Margaret may have died 18 years ago, but her gifts have proved invaluable during lockdown for her friend Lady Glenconner. ‘Princess Margaret gave me lots of silk scarves, which have come in terribly useful now, as we’re not able to go to a hairdresser,’ says Anne, who was Extra Lady-in-Waiting to the Queen’s sister for 31 years. Her late husband, Lord Glenconner, gave Margaret a plot of land on Mustique for a wedding present.

Angel Ella chills in a waterfall

That’s one way to celebrate the end of the academic year! London-born Charlie’s Angels star Ella Balinska celebrated finishing summer term at university by immersing herself in an ice-cold waterfall near her home in Los Angeles.

The 23-year-old daughter of model-turned-chef Lorraine Pascale and Polish musician Count Kaz Balinski-Jundzill shared a picture of herself in athletic gear while taking a dip.

‘Grateful to have an incredible support system which apparently includes friends that take me on hikes to stand under FREEZING waterfalls,’ she joked, just a week after pulling a ‘classic uni deadline all-nighter’.

Her brother Sir Richard Branson founded Virgin Records, but Vanessa Branson had a brief pop career of her own — reciting Froggy Went A-Courting on the B side of the Tubular Bells single by her ex, Mike Oldfield. ‘We had a very brief relationship,’ recalls Vanessa, wincing at the memory of her schoolgirl foray into pop. ‘It was absolutely dreadful!’

Sheila Hancock has reached the age at which she is scolded by her children. The outspoken actress, 87, says: ‘I used to tell them off for being naughty — now they tell me off. If I’m going on a discussion programme, I get a call. “Mum, please don’t offend anyone else.”’ But her mischief-making pleases some members of her family. She says: ‘My grandchildren love it.’

English rose Rosamund Pike refuses to play characters known only for their looks.

The Gone Girl star, who has played war reporter Marie Colvin and more recently, the Nobel scientist Marie Curie, declares: ‘There’s something quite liberating in playing a woman who doesn’t need to lead with charm.

‘As we know the looks of the woman is the surface — the really interesting stuff is when you go beyond that.’

Pike adds: ‘Sure, we can all admire beauty, but the real reason I’m drawn to people is way deeper than that.’ 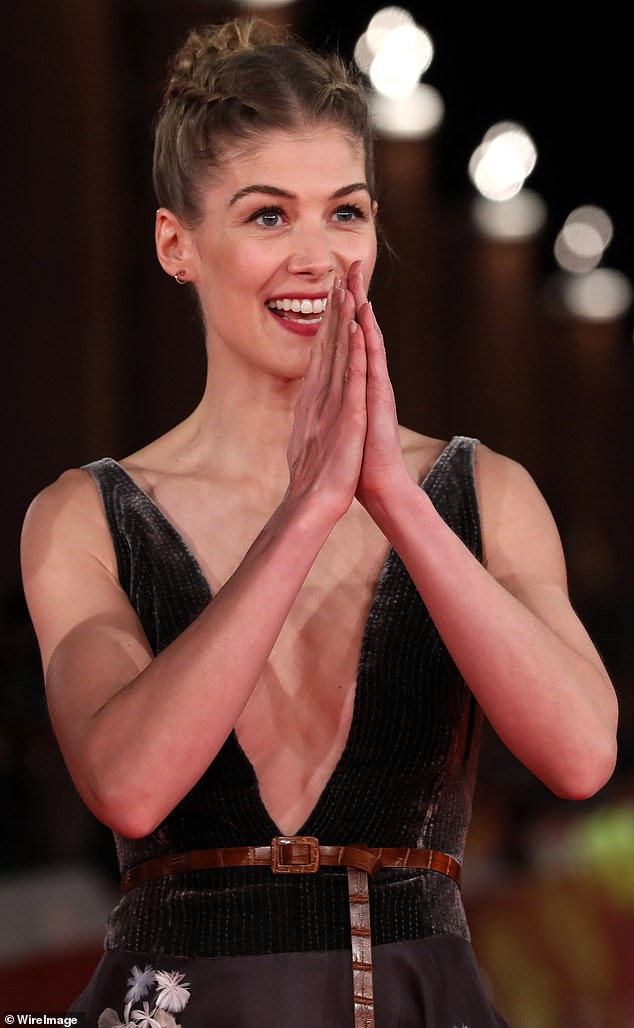 Sir Mick Jagger’s ex-wife Bianca Jagger, who wants to make the wearing of masks mandatory, is urging the Government to use up-and-coming designers to make the coverings more fashionable. ‘I want to remove the stigma about wearing masks by making masks for young people that they would like to wear,’ she tells me.

‘In order to do this, I’m asking prominent people from the world of art, science and the movers and shakers around the country, to send a short message and create a work of art on a mask.’ Maybe she could ask Mick?

Nigora Bannatyne, 40, flaunts her figure in a pink cut-out swimsuit

Khloe Kardashian shows off her gym-honed body on Instagram