Home » Celebrities » Simon Cowell, 61, smokes a cigarette on a jet ski in Barbados

Simon Cowell, 61, smokes a cigarette on a jet ski in Barbados

Simon Cowell, 61, smokes a cigarette on a jet ski as he hits the beach with Lauren Silverman, 43, in Barbados… four months after breaking his back in electric bike accident

He has headed to Barbados for his annual festive getaway with partner Lauren Silverman, 43, son Eric, six, Lauren’s eldest son Adam and dogs Squiggly and Diddly.

And while Simon Cowell has adopted a healthy vegan diet, it appears he hasn’t given up smoking as he was spotted puffing on a cigarette while riding a jet ski on Sunday.

The music mogul, 61, looked on the road to recovery as he drove the water vehicle one-handed, four months after breaking his back in an electric bike accident. 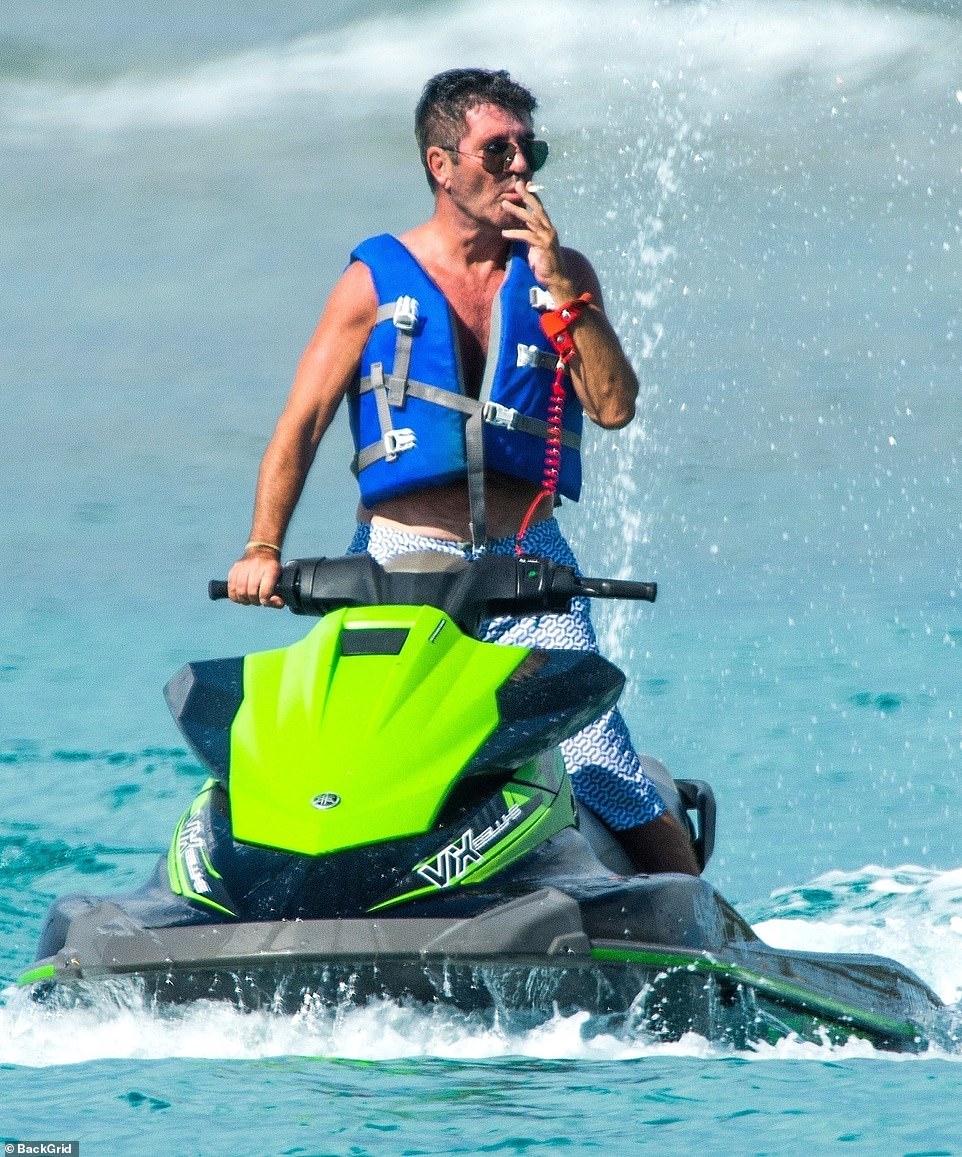 Vice: Simon Cowell, 61, smoked a cigarette on a jet ski as he hit the beach with Lauren Silverman, 43, in Barbados on Sunday… four months after breaking his back in electric bike accident

Simon, who is said to be walking five miles a day to aid his recovery, showed off his svelte figure in blue patterned board shorts.

He donned a blue life jacket and shielded his eyes from the sun with black aviators.

The X Factor creator has shed a whopping 4st after adopting a strict vegan diet and overhauling his exercise. 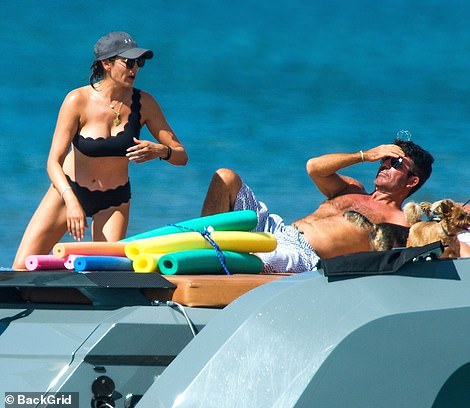 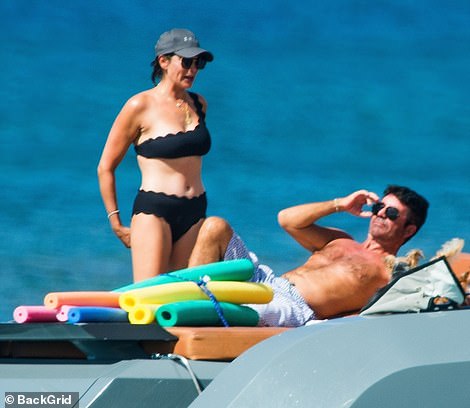 Family trip: The couple relaxed on a yacht joined by their dogs Squiggly and Diddly 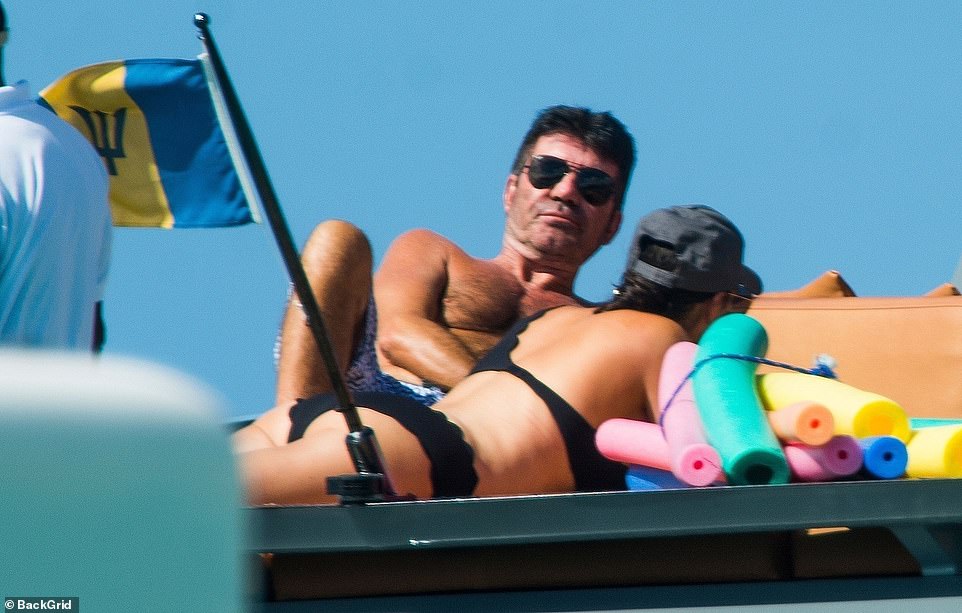 Time to relax: Simon and Lauren topped up their tans as Eric and Adam played on the boat 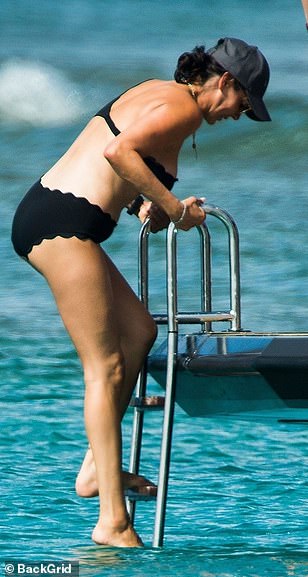 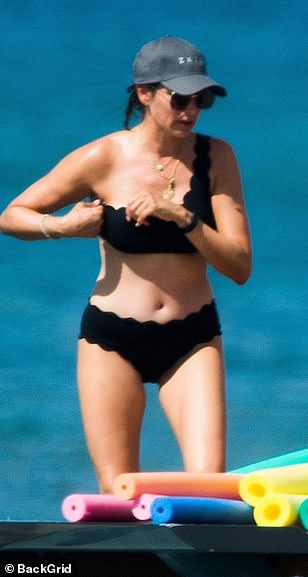 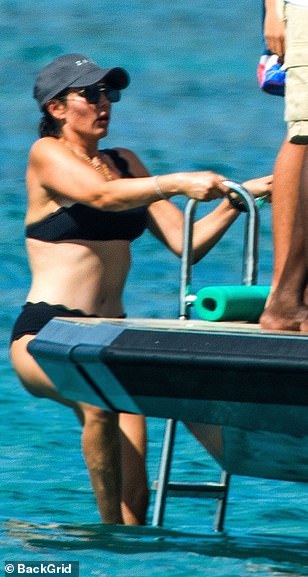 Gorgeous: Lauren, meanwhile, showcased her figure in a scalloped one shouldered bikini 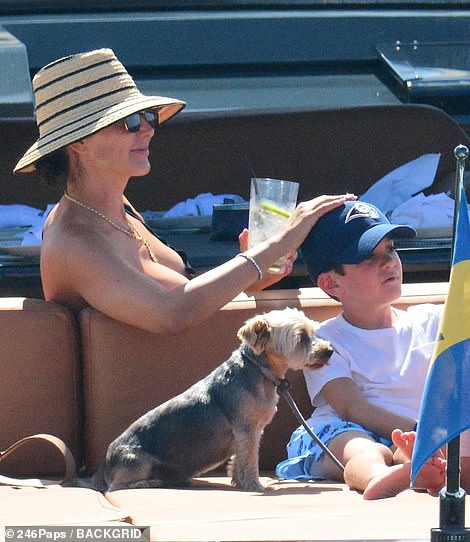 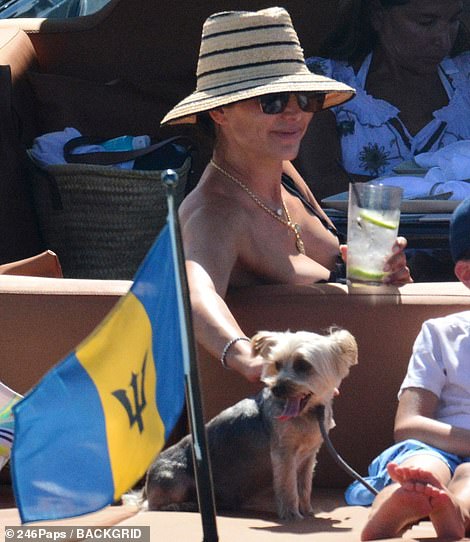 Living the life! Lauren sipped on a refreshing lime drink in the sunshine as she relaxed with Eric and the dogs

Lauren, meanwhile, showcased her figure in a scalloped one shouldered bikini.

The socialite completed her beach look with a grey baseball cap, black round sunglasses and a white shirt.

The couple appeared to be having fun as they headed out on a boat for the day, with Simon later doing some scuba diving with Eric.

Lauren’s son Adam, whom she shares with her ex husband Andrew Silverman, joined the family on the boat trip.

The holiday no doubt comes as a welcome break for Simon, who was taken to hospital in August to undergo six hours of surgery after breaking his back. 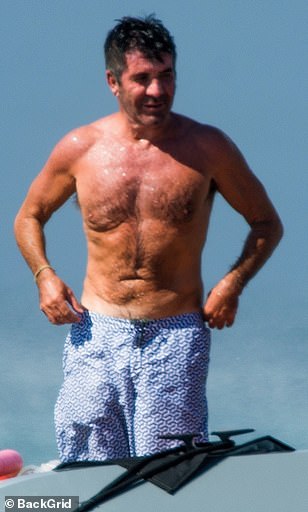 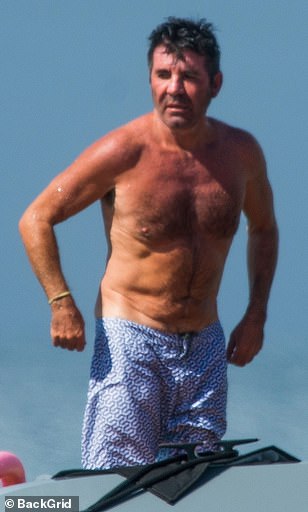 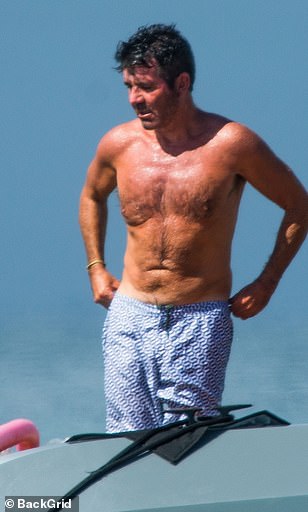 Keeping fit: Simon, who is said to be walking five miles a day to aid his recovery, showed off his svelte figure in blue patterned board shorts 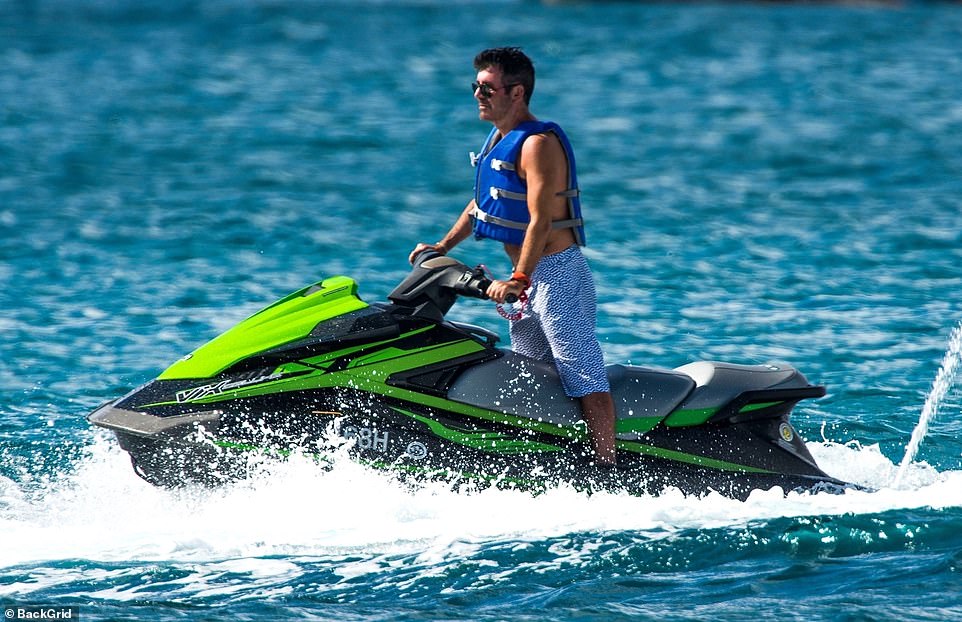 Adrenaline seeker: Simon showed no fear of zooming around on a jet ski, after his nasty bike incident over the summer 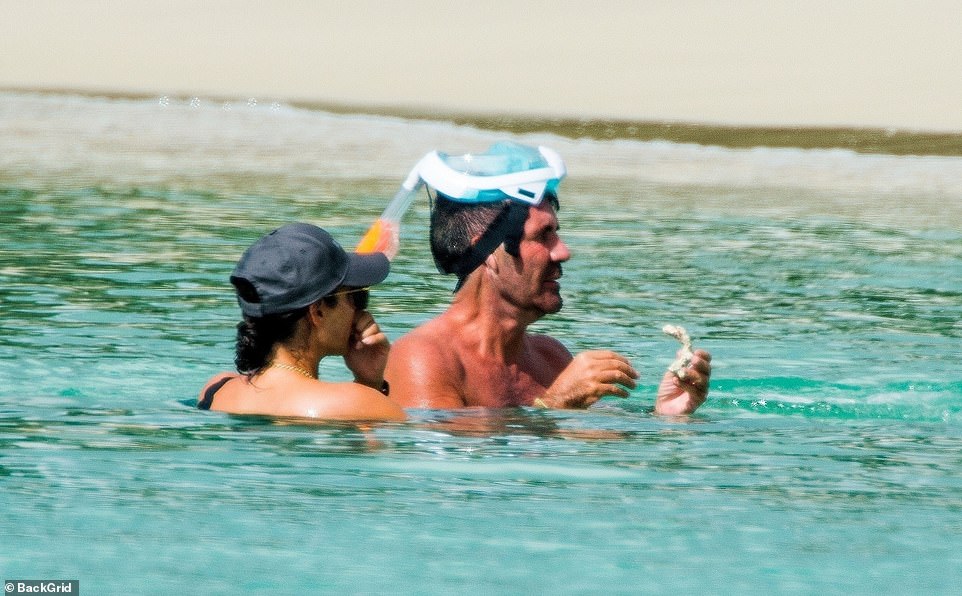 Taking to the water: The couple appeared to be having fun as they headed out on a boat for the day, with Simon later doing some scuba diving

He had to cancel all his planned TV work for the rest of the year, including Britain’s Got Talent.

Simon continues his recovery during the festive getaway. Sinitta, 52, who once dated the Britain’s Got Talent judge, has disclosed that he is now walking a gruelling five miles a day amid his continued recovery.

She told The Sun: ‘Simon has worked hard at his recovery and told me he’s walking 10,000 steps a day that’s around five miles – way more than he was before the accident. He’s got one of those watches that measures every step.’

It comes after sources claimed last week that Simon was considering legal action against the manufacturers of his electric bike after breaking his back. 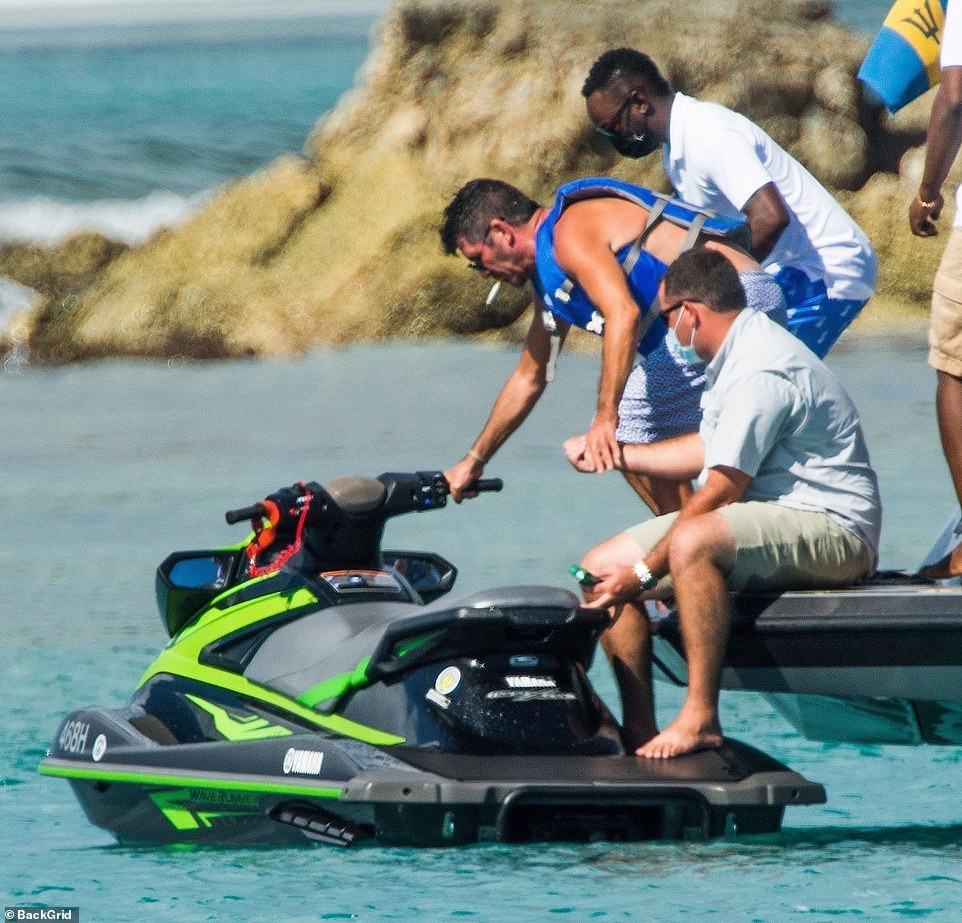 Helping hand: Simon was helped onto the jet ski while he puffed away on his cigarette 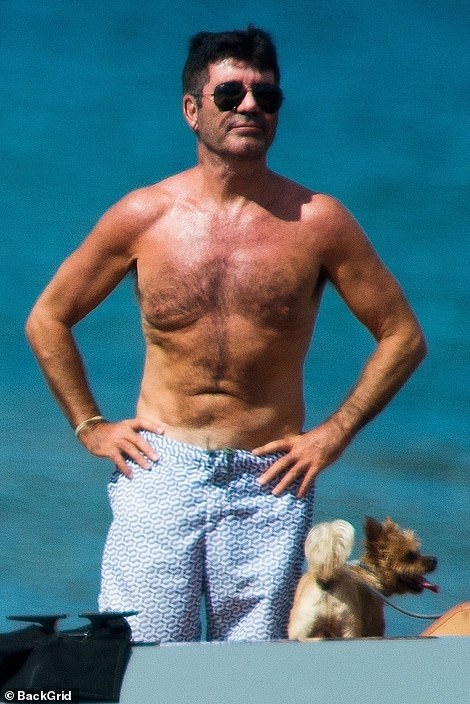 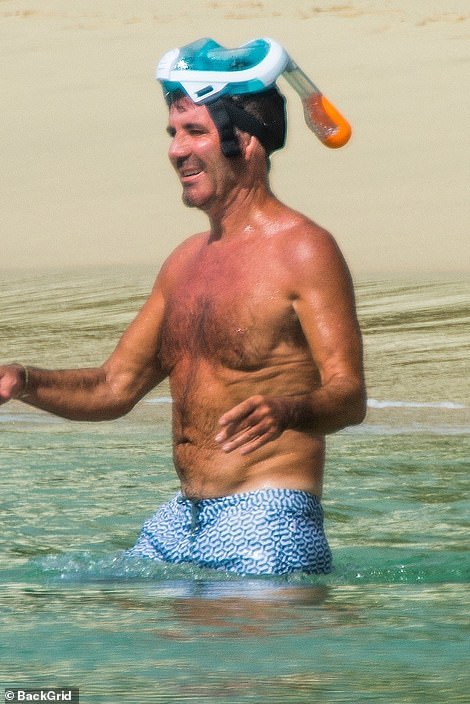 Looking good: The X Factor creator has shed a whopping 4st after adopting a strict vegan diet and overhauling his exercise 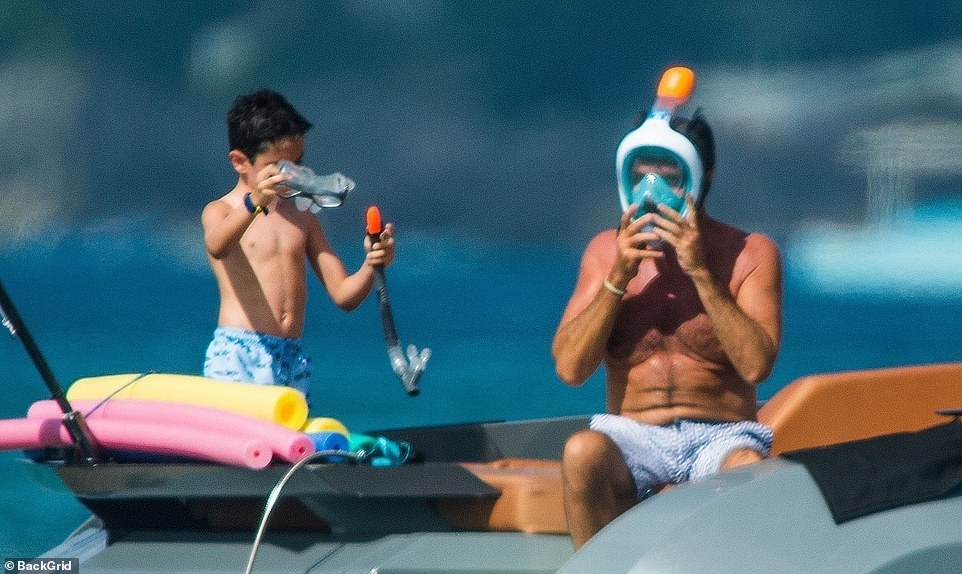 Sea life: Simon put on his snorkeling gear with Eric also having his own kit

The TV mogul and his team are said to be ‘weighing up’ legal options and have been ‘pressing’ the manufacturers, Swindon Powertrain.

One lawyer claimed that a successful lawsuit could see Simon get up to £10million for medical bills and loss of earnings, The Sun reported.

It comes as a whistleblower from the manufacturers reportedly claimed the £20,000 electric bike an ‘accident waiting to happen’ due to Simon’s lack of training. 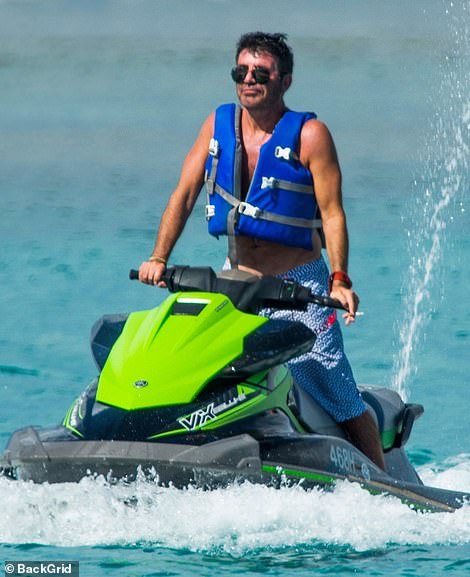 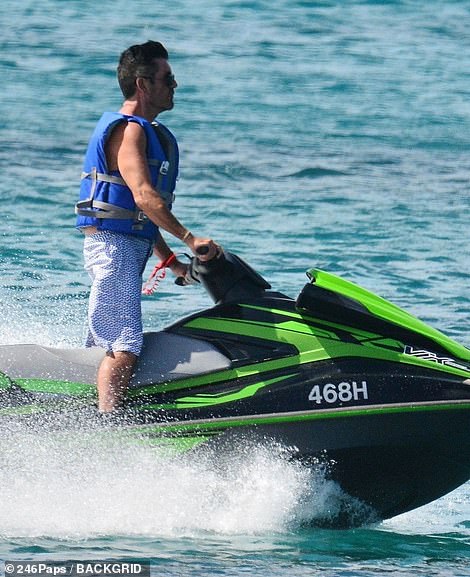 Fury: The holiday will no doubt spark envy among some of Simon’s followers who are forced to spend Christmas alone after Boris Johnson imposed Tier 4 ban on London and the South East earlier this week 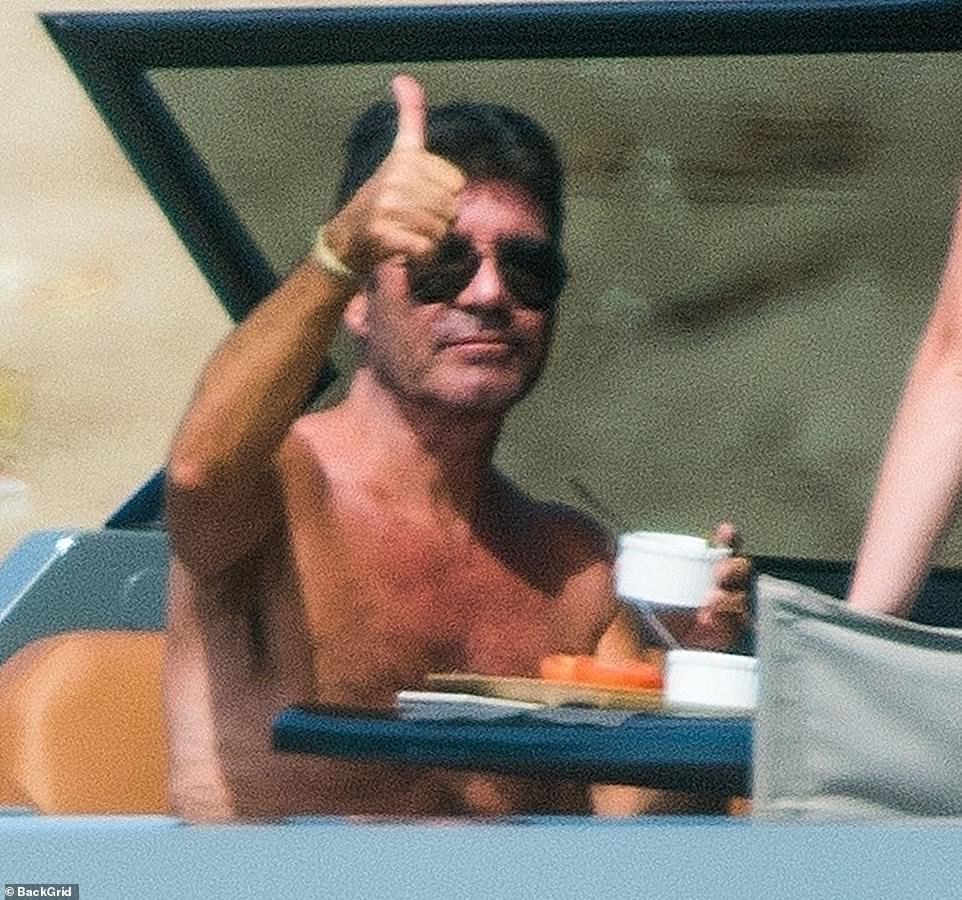 Delicious: Simon gave a thumbs up as he tucked into some lunch

He told the publication: ‘It should never have been sold to Simon without him being taught how to use it.’

The former employee claimed the Swind EB-01 bike, which can reach up to 60mph and is banned on public roads in the UK, should not be used without specialist training.

The source continued: ‘I said to my boss, “Are you showing Simon how to use this?” He said he was just dropping it off and I said, “Are you serious?”‘

The X Factor boss’ team are studying the claims made by the former employee and are ‘pressing the manufacturers’ about the safety of the bike. 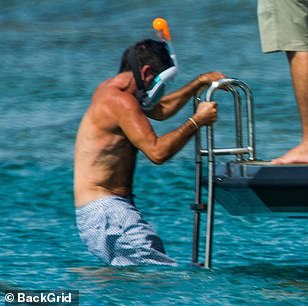 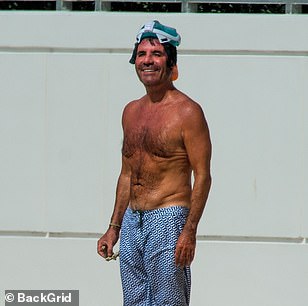 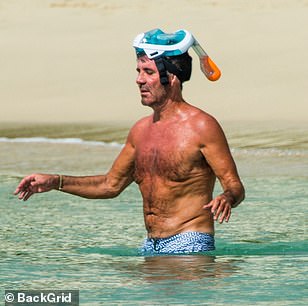 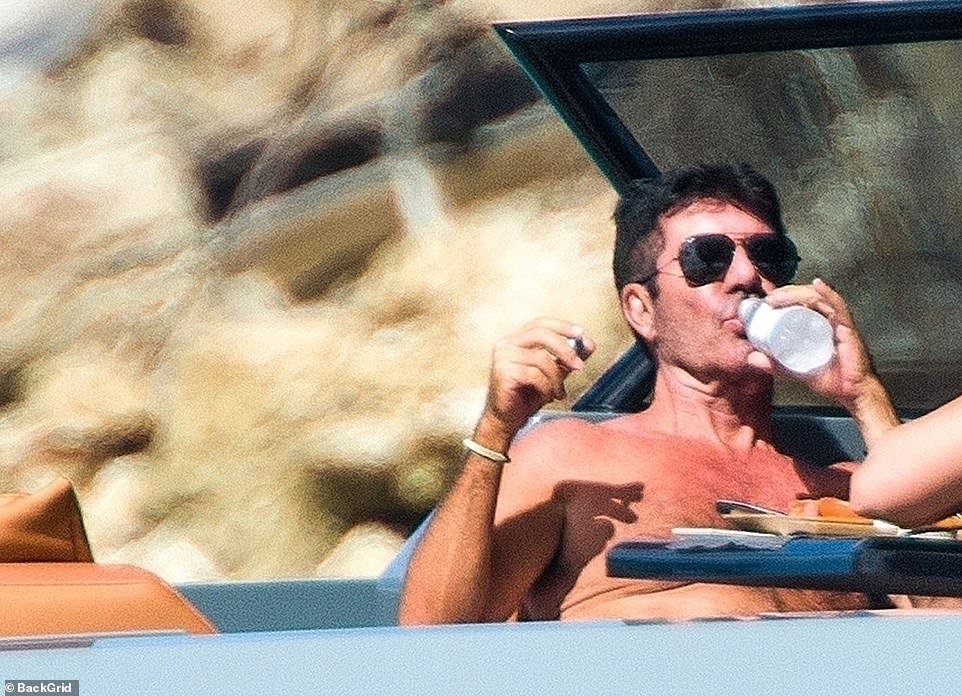 Time for some sun cream: The star had certainly caught the sun as he relaxed on the boat

A spokesperson for Simon told MailOnline: ‘Simon is understandably extremely concerned for other peoples’ safety in relation to this bike.

‘We have been pressing the manufacturers about this and will continue to press them, including in relation to the claims of the former member of staff.’

A spokesperson for Manufacturers Swindon Powertrain told MailOnline: ‘With any device, it is important to read the user manual before attempting to operate, acknowledged by Mr Cowell himself. 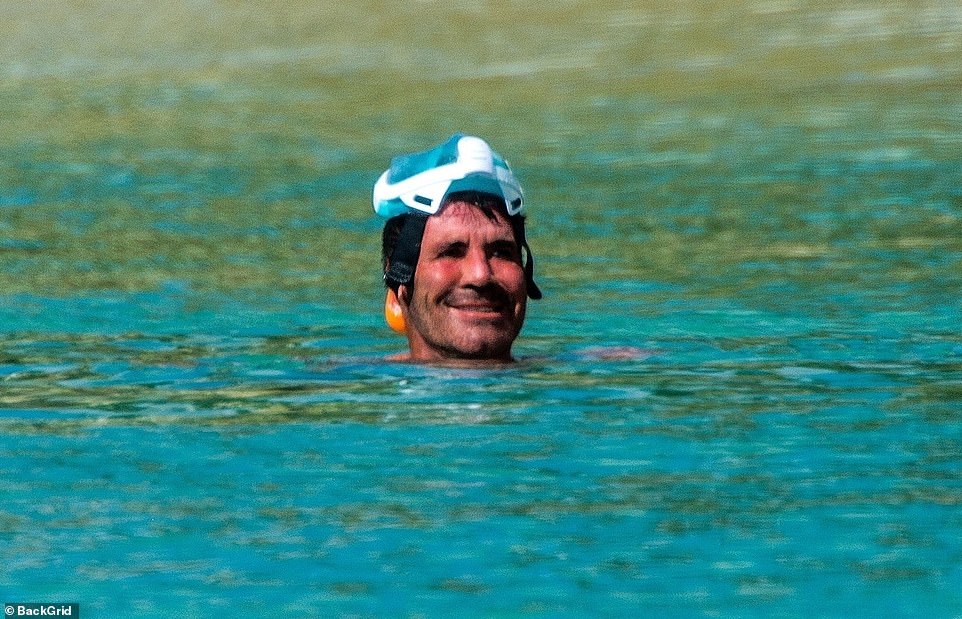 Amazing getaway: Simon smiled as he enjoyed a swim in the sea

‘The EB-01 user manual includes a detailed process of how to familiarise oneself with the performance features and procedures to follow.’

They added that they are ‘in contact with Mr Cowell’s aides to progress this’, noting, ‘the company has acted in good faith at all times.’

Simon broke his back in August after falling from his electric bike, leaving him forced to undergo a six-hour surgery to try and fix the injuries.

The accident occurred when the powerful machine ‘flew up in the air and did an accidental wheelie’ after he tried to change gears.

The music boss is thought to have been ‘surprised by the power’ of the bike and knew immediately that he ‘was in trouble’.

Following the accident, Simon tweeted: ‘Some good advice… If you buy an electric trail bike, read the manual before you ride it for the first time.’ 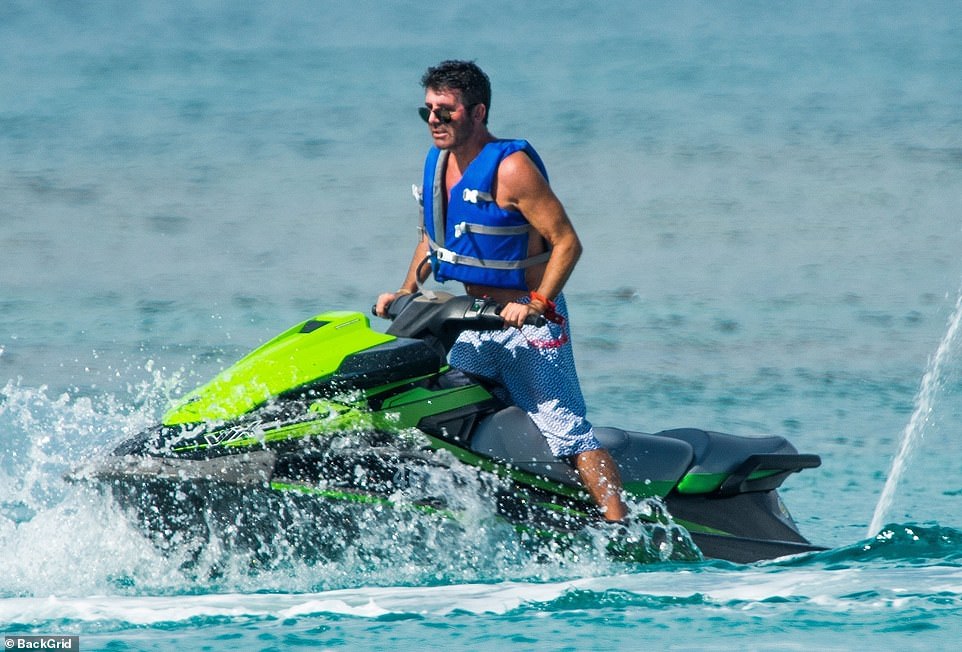 Tough: Simon’s recent injuries and ongoing recovery saw him sit out of the resumed 2020 series of Britain’s Got Talent after it returned following England’s first lockdown

He went on: ‘I have broken part of my back. Thank you to everyone for your kind messages.’

He then added in a second tweet: ‘And a massive thank you to all the nurses and doctors. Some of the nicest people I have ever met. Stay safe everyone Simon.’

His recent injuries and ongoing recovery saw him sit out of the resumed 2020 series of Britain’s Got Talent after it returned following England’s first lockdown.

But only recently Simon’s BGT colleague Amanda Holden confirmed he’d be back to work filming the new series in January, telling the Loose Women panel: ‘He is, Mr Cowell is coming back. I spoke to him on the phone a few weeks ago and he feels on top of the world and apparently he looks fantastic as well.

‘So he’ll be back for the new season which we’re filming in January. I can’t wait for it.’ 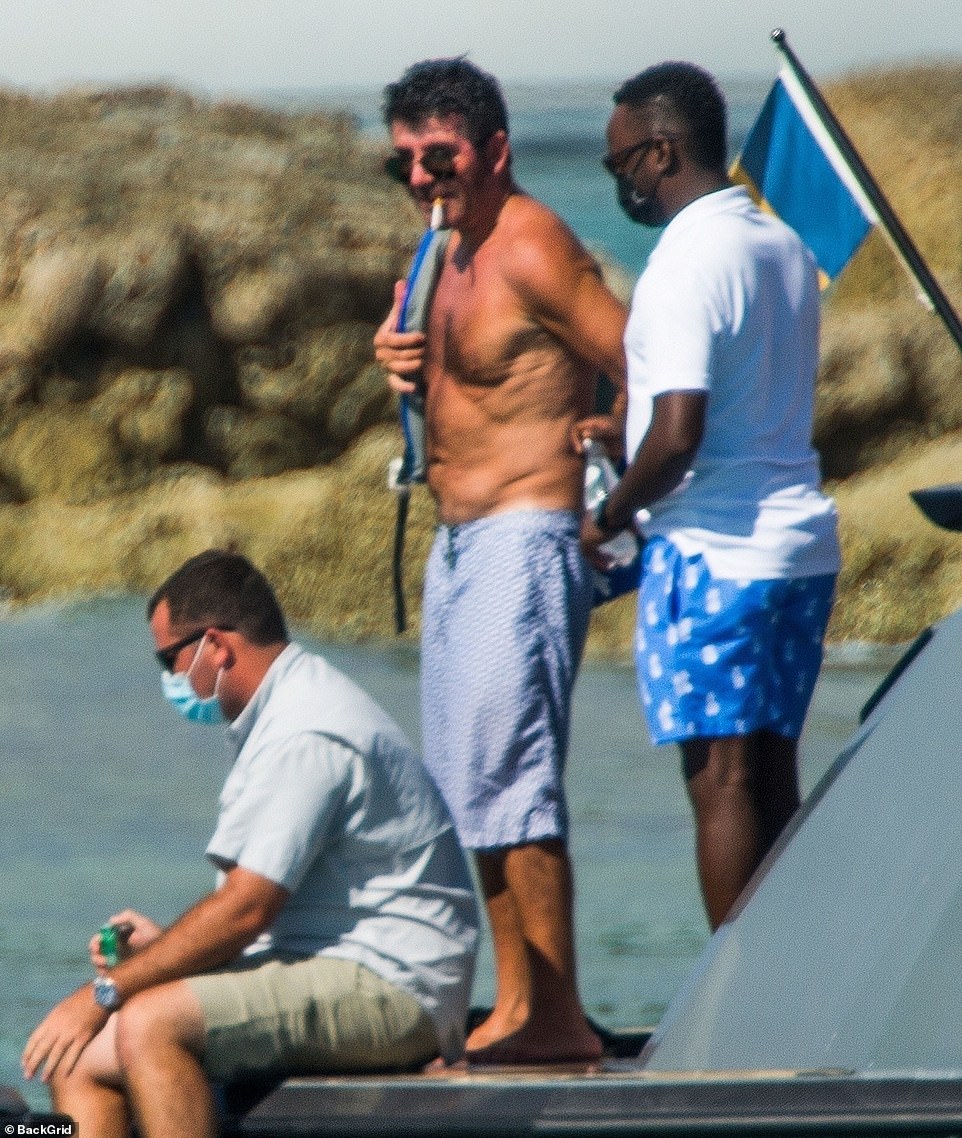 ‘He’ll be back’: But only recently Simon’s BGT colleague Amanda Holden confirmed he’d be back to work filming the new series in January

Bella Thorne DEFENDS Armie Hammer – And If You Are Too, You Should Read This