She recently called Kylie Jenner her best friend after joining her on a lavish yacht trip to some of Europe’s most glitzy destinations with family and friends.

And Sofia Richie, 21, showed that she and the 22-year-old billionaire have much in common on Monday, when she stepped boasting a plump pout not unlike her pal’s.

The model drew attention as she arrived at the Alice + Olivia by Stacey Bendet New York Fashion Week presentation sporting her new and hard-to-miss look. 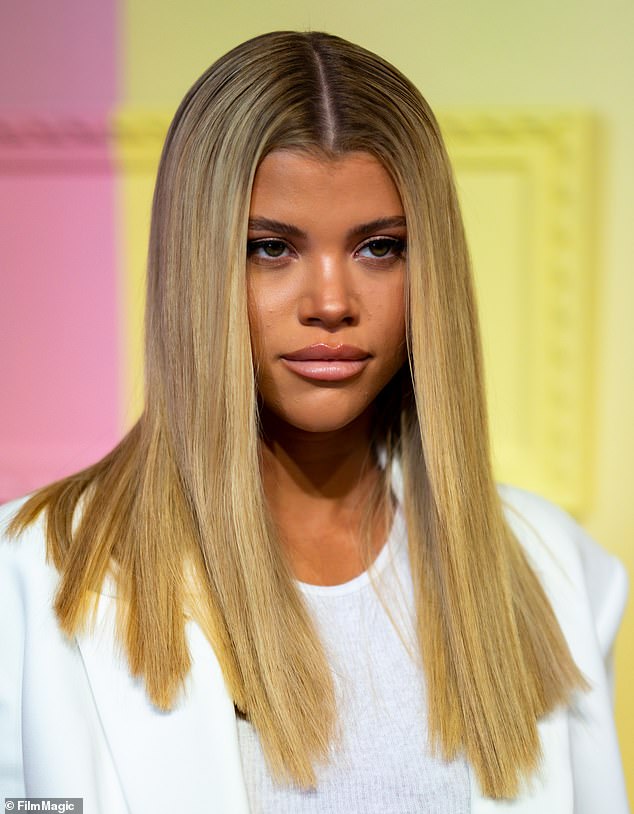 Cutting a glamorous figure in a pristine white ensemble — which included shorts and a blazer over a matching top — the daughter of legendary musician posed, and pouted, up a storm as she hit the red carpet at the Big Apple event.

Rounding out her ensemble with black strappy heels, Sofia — who is dating Kylie’s sister Kourtney Kardashian’s ex Scott Disick, 36 — wore her blonde tresses in a sleek straight style with a centre parting.

She joined a host of familiar faces at the exclusive event, including Suki Waterhouse, Delilah Hamlin, Paris Hilton and her sister Nicky Hilton Rothschild. 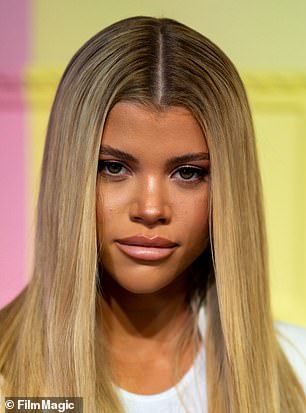 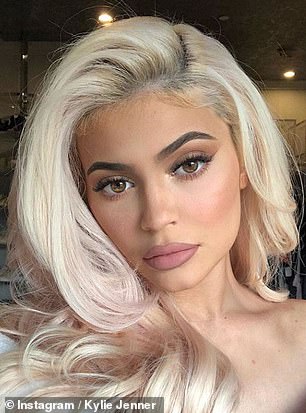 Lip service: The 21-year-old beauty displayed a decidedly plump pout during her outing, not unlike that of her pal, Kylie Jenner’s, right 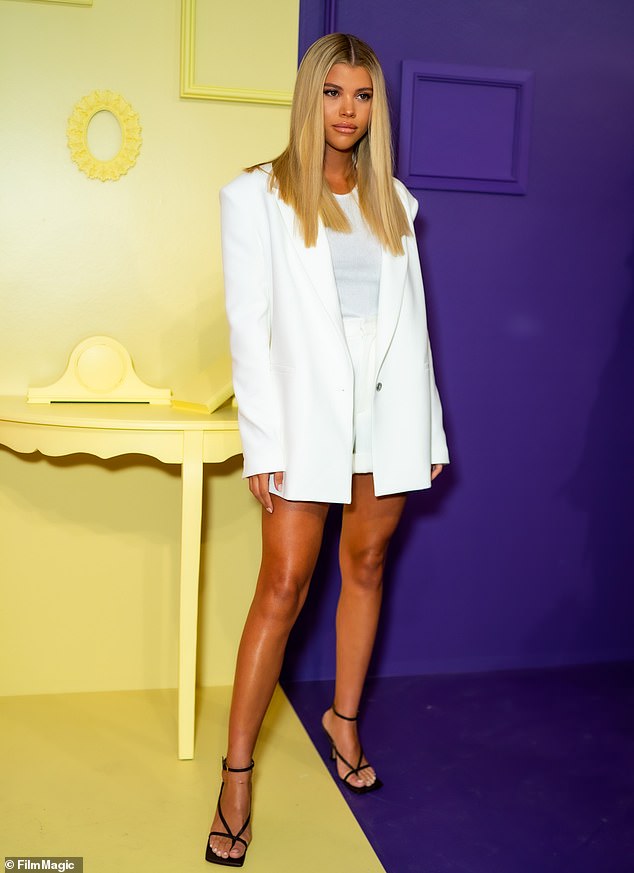 Glam: She cut a glam figure in a pristine white ensemble, which included shorts and a blazer 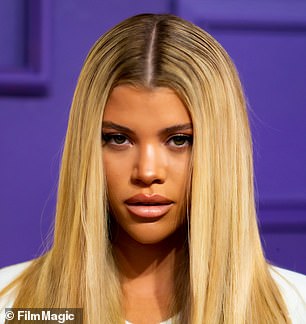 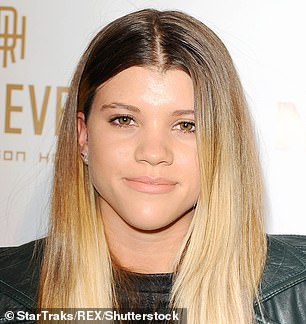 Changing looks: Sofia’s eye-catching look was notably different from when she first burst onto the Hollywood scene. Pictured left in May 2014

Sofia’s eye-catching look comes almost a year after makeup mogul Kylie revealed she had resumed using lip fillers, months after having them removed.

In October, Kylie showed off a return to much fuller lips on her social media while thanking a dermatology clinic for ‘coming through late night with a lip touch up’.

The Kylie Cosmetics founder first got lip fillers at the age of 16 after a boy told her he was surprised she was a good kisser with her ‘small’ lips.

A fan had written beneath the July photo of Kylie with pal Stassi ‘She looks like the old Kylie here idk why,’ to which Kylie responded: ‘I got rid of all my filler.’ [sic] 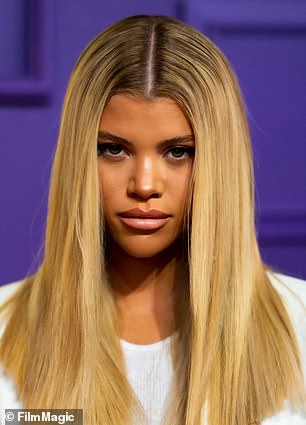 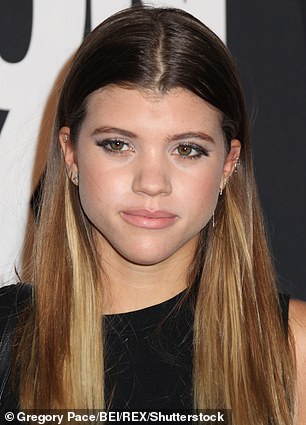 Bronzed: Sofia’s new look also appeared to include a more generous use of bronzer. Pictured left in September 2014 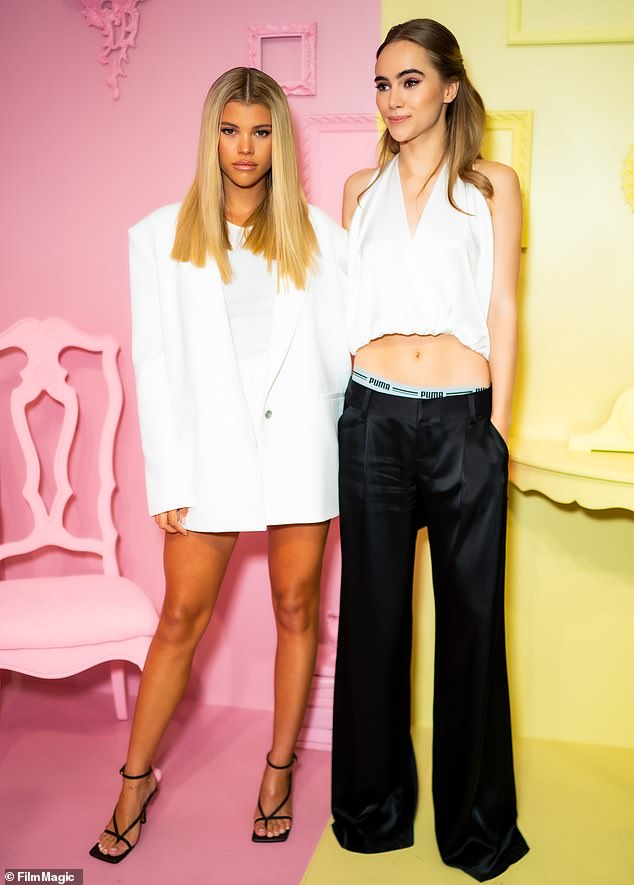 Posing up a storm: At the event, she posed up a storm with British beauty Suki Waterhouse 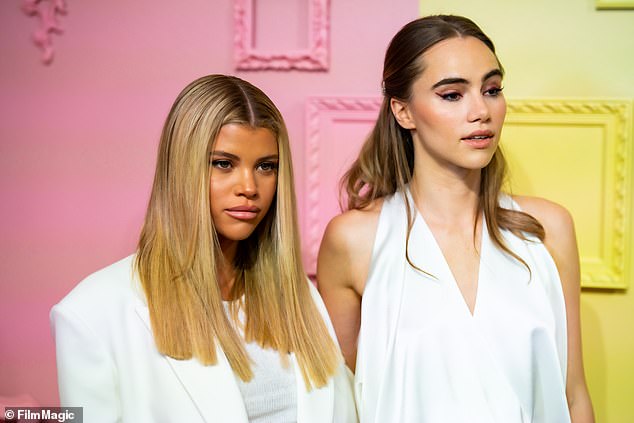 Sleek: The daughter of iconic musician Lionel Richie wore her blonde tresses in a sleek style 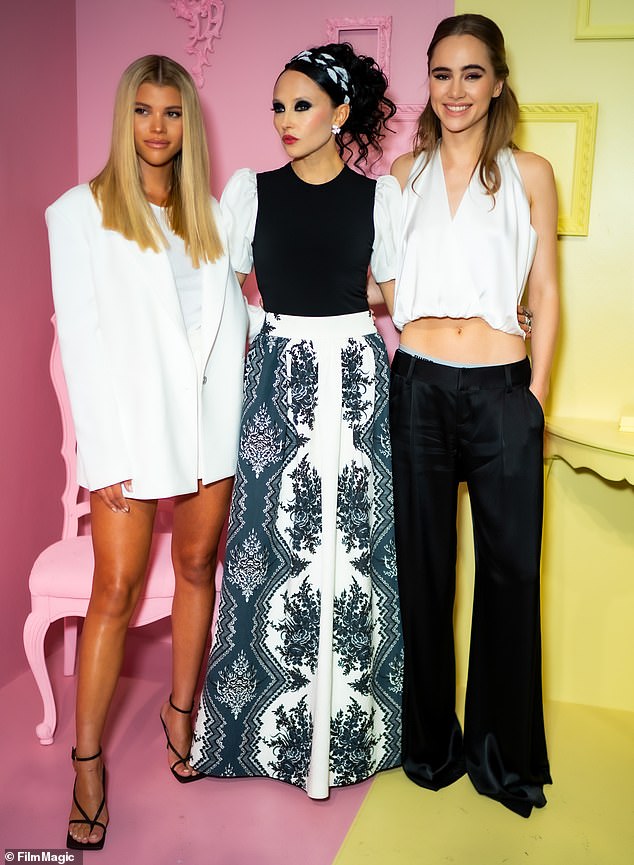 Chic style: During the event, they posed with designer Stacey Bendet, who cut a chic figure

The raven haired beauty has been open about her insecurities about her lip size when when she was growing up.

In May 2015, she admitted to getting lip fillers because of the insecurity; before that, she had used the popular technique of overlining her lips.

Kylie, who gave birth to daughter Stormi on February 1, 2018, first felt insecure about the size of her lips when she was 15 years old.

The Kylie Cosmetics founder said in a YouTube video published in July that Stormi has ‘the most perfect lips,’ adding that: ‘She didn’t get those from me, I thank her dad for those.’ 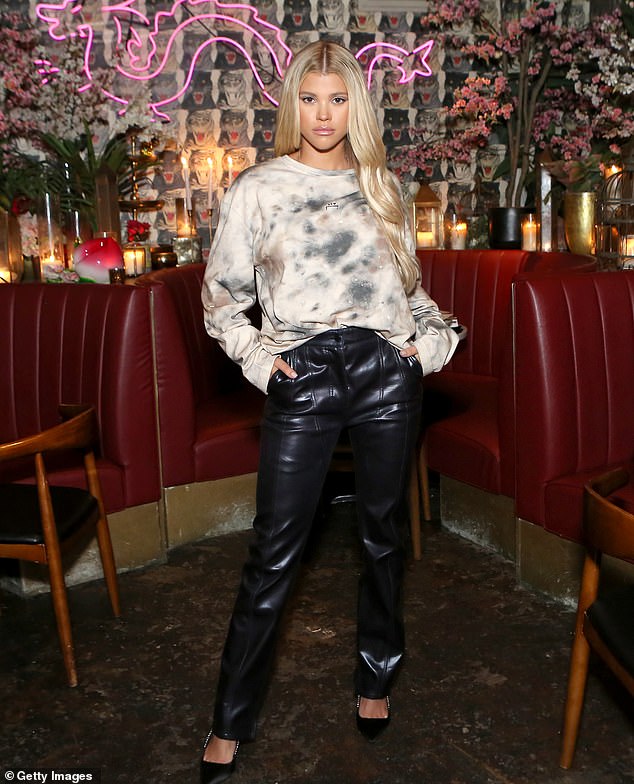 Change clothes: Later in the evening, she switched ensembles and crossed town for the Diesel x A-Cold-Wall Dinner at Chinese Tuxedo 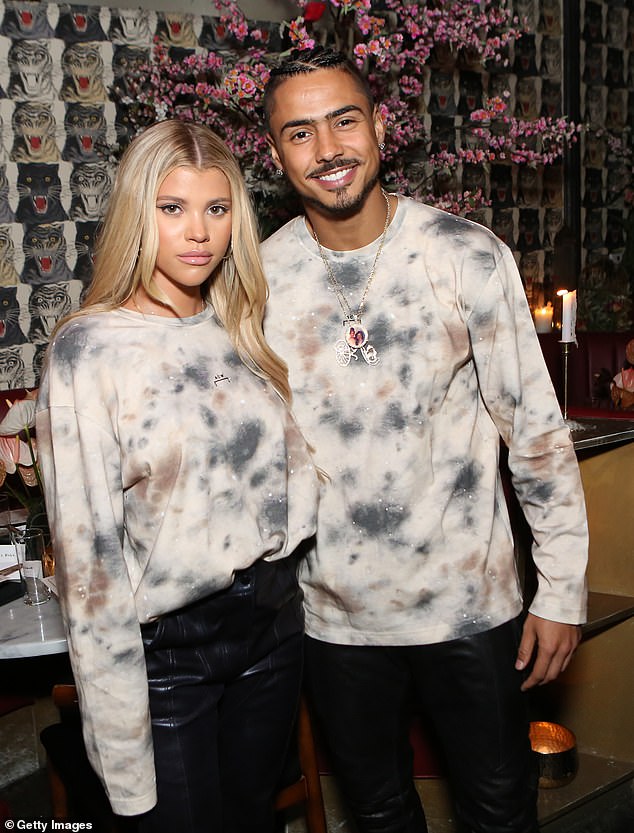 We like to party: The beauty posed for a snapshot with the late Kim Porter’s actor son Quincy 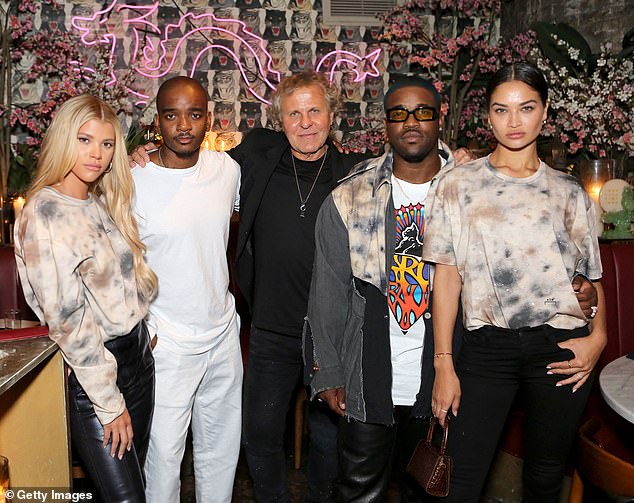 ‘The one thing I was insecure about, she has,’ she said, referring to full lips.

Kylie added: ‘She has the most perfect lips in the whole entire world,’ as she noted that those are due to dad Travis.

The mother of one said on her E! reality series Life Of Kylie: ‘I was 15 and I was insecure about my lips. I have really small lips.

‘And it was like one of my first kisses and a guy was like, “I didn’t think you would be a good kisser because you have such small lips.” But I took that really hard.’ via People. 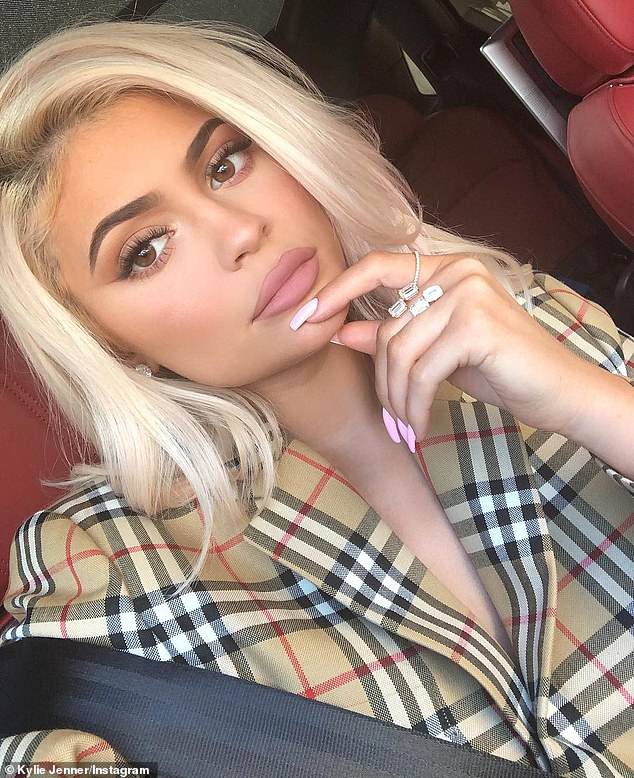 Sharing all the details: Sofia’s pal Kylie has been open about her use of lip fillers over the years 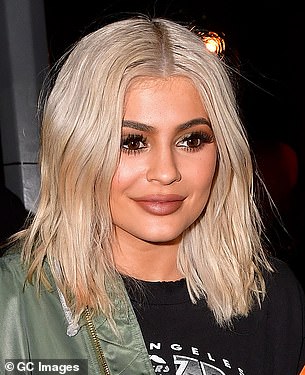 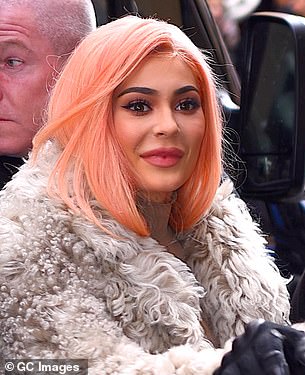 Through the years: Kylie pictured on left on September 7, 2016, and on the right February 13, 2017. Both pictures were taken in New York City 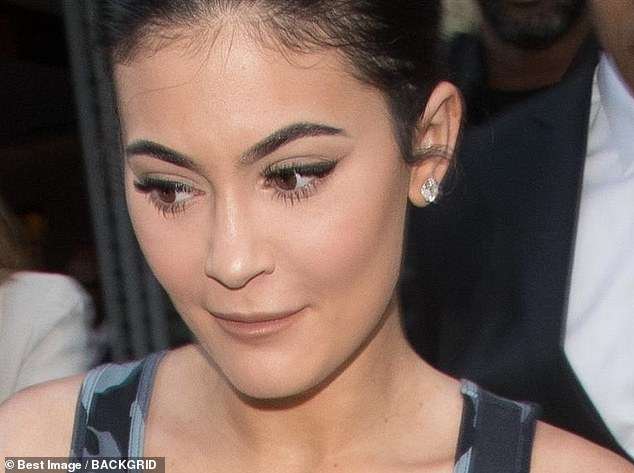 Memories: The Kylie Cosmetics founder first got lip fillers at the age of 16 after a boy told her he was surprised she was a good kisser with her ‘small’ lips