Stacey Solomon has embraced her so-called ‘chin fuzz’ as she revealed that her seven-month-old son ‘plays with it to go to sleep’.

The singer took to Instagram to share a cute video of little Rex sound asleep, as she joked the tot loves to stroke her ‘beard.’

Stacey has been no stranger to sharing sweet videos of her adorable son, who she welcomed with boyfriend Joe Swash in May. 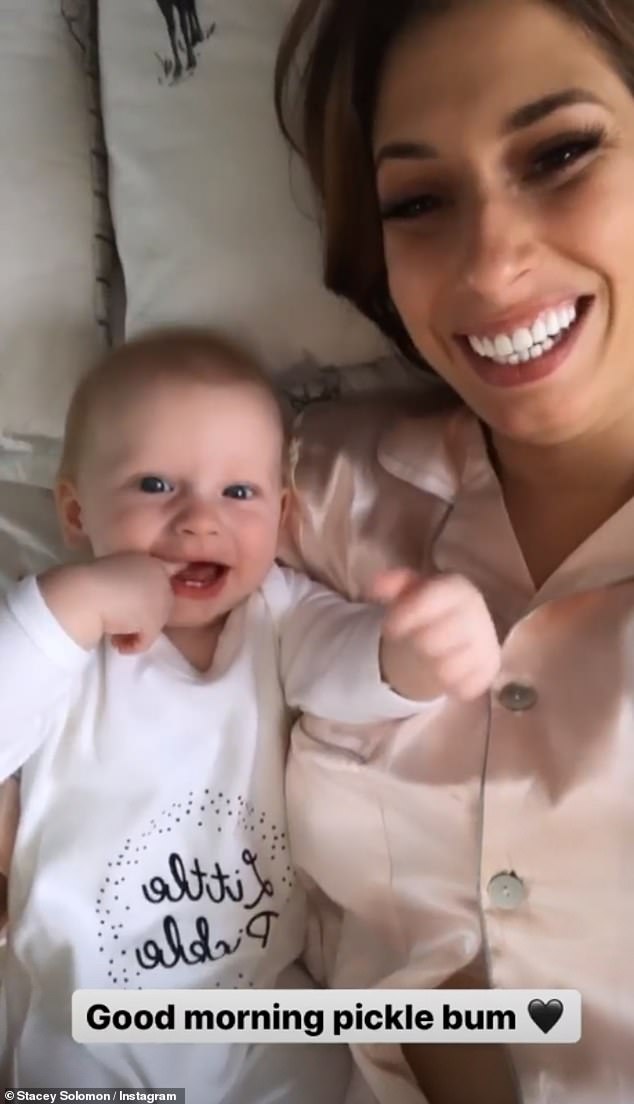 Cute! Stacey Solomon has revealed she ‘loves her chin fuzz’ because her seven-month-old son Rex ‘plays with it to go to sleep’

Stacey said in the video: ‘My favourite thing ever is how he strokes my beard to go to sleep! I have little fuzzy hairs on my chin and it just makes me so happy.

And she captioned the clip: ‘Honestly love my chin fuzz more than ever right now!’

The mother-of-three also shared a clip of baby Rex laughing as he kissed her hand while the pair laid on her bed.

She wrote in the caption, ‘good morning pickle bum,’ and ‘he melts my heart’. 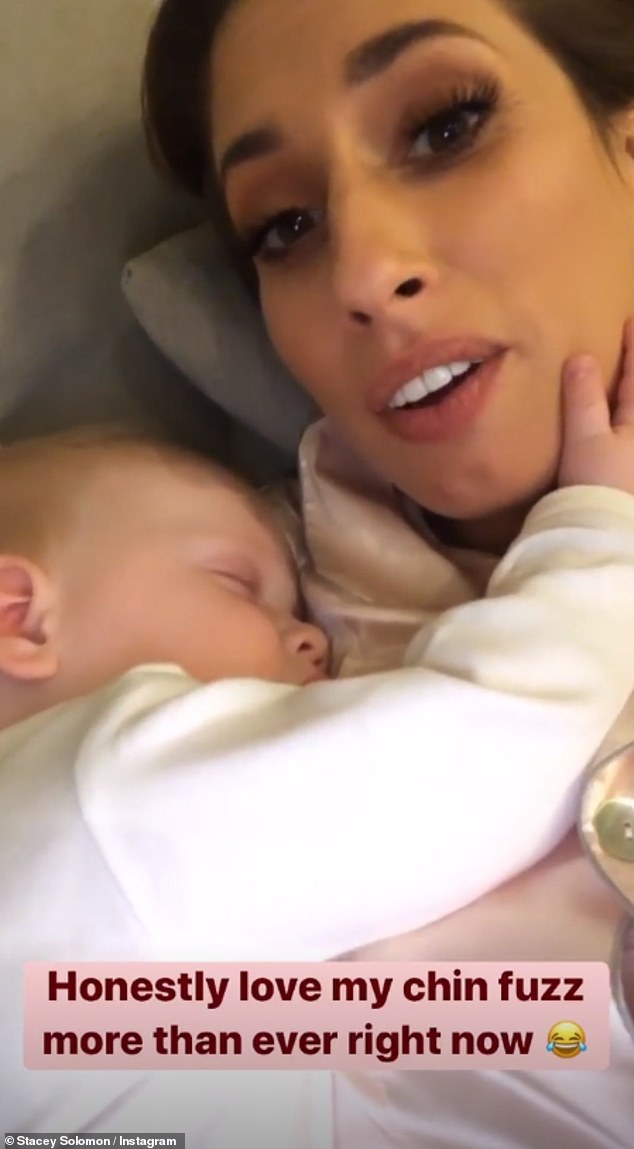 Funny: The presenter shared a cute video on her Instagram story of Rex with his hand wresting on her face while he was asleep, writing that she ‘loves her chin fuzz more than ever’

The Loose Women panellist’s post comes after she revealed on the programme on Friday that she asked her two sons for their permission to have another baby with her partner Joe.

Stace who has sons Leighton, seven, and Zachary, 11, from previous relationships, said she wouldn’t have had another baby without her children’s blessing, because she wouldn’t want to make their lives ‘miserable’.

Last night, Stacey also addressed questions from fans about why Joe’s son from a previous relationship didn’t appear on their family Christmas card, saying the situation is ‘a bit more complicated than it seems’.

She said: ‘We’re a very open family, I think it’s always complicated when you’re in a blended family and you know there are different dynamics. 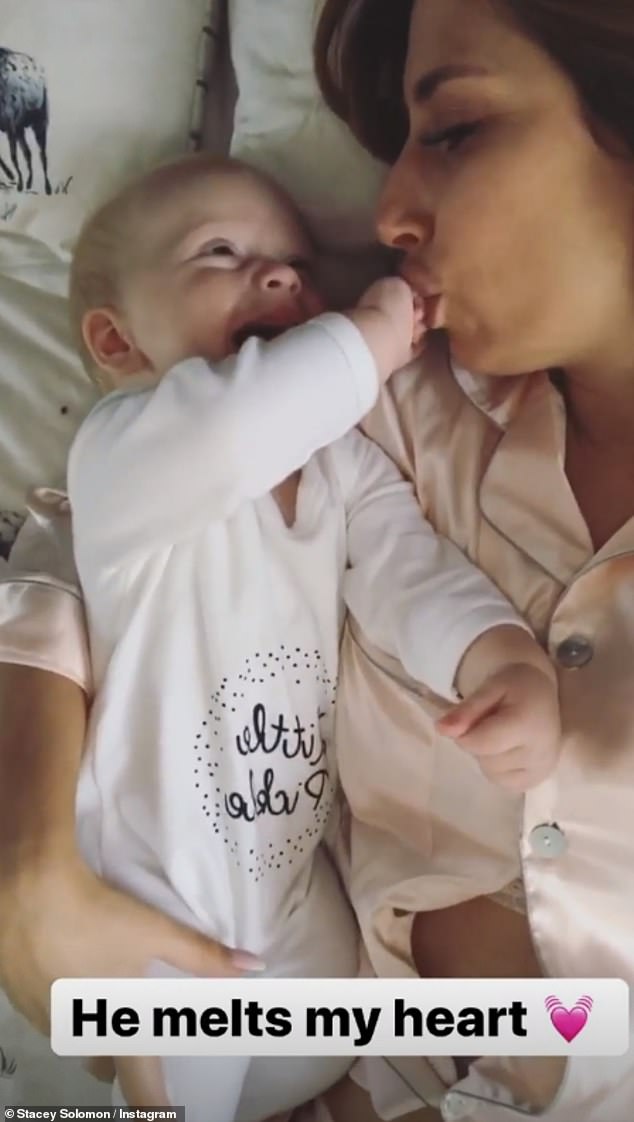 Mother and son: The mother-of-three also shared a clip of baby Rex laughing as he kissed her hand while the pair laid on her bed

‘When Joe and I decided to have Rex, we had to have a conversation with the children first to make sure that they were comfortable with that.’

She told that the pair hadn’t even started trying before seeking the permission of Stacey’s children. 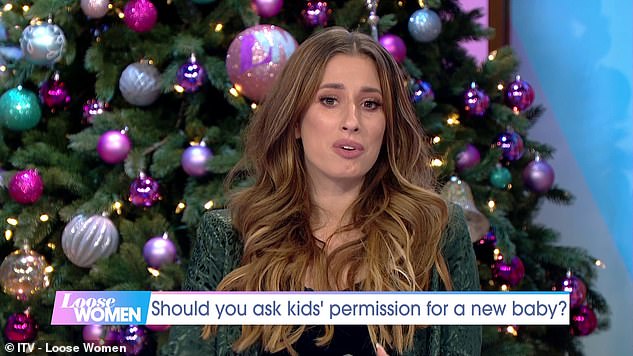 Please let me! Loose Women panellist Stacey Solomon (pictured) confessed that she asked her two sons for their permission to have another baby

‘Before we started trying, we sat down with all of our children and spoke about the notion of adding more to the family.’, said Stacey.

‘Because it just didn’t feel right to go on ahead without making sure they were happy.’

‘I feel so privileged to have two children in my life. If that would have made their life miserable – no I wouldn’t have gone ahead and changed that.’ 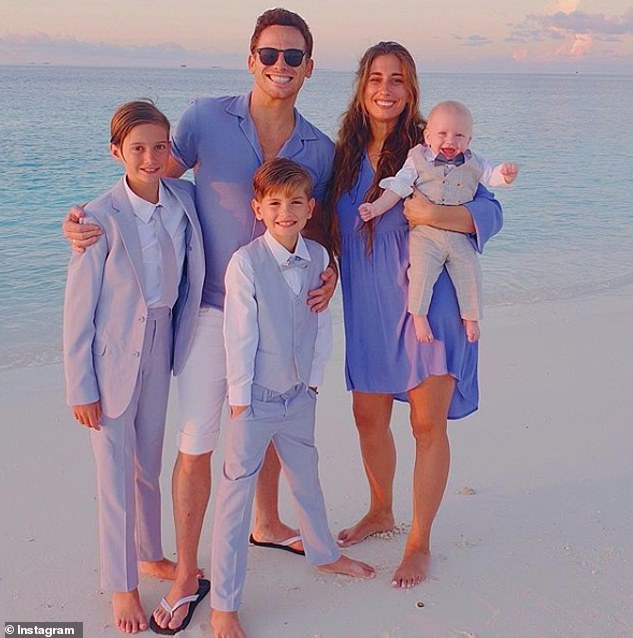 Children: The TV personality shares Rex with presenter Joe Swash (Pictured with Joe and her three children Zachary, 11, Leighton, seven, and baby Rex, on holiday in The Maldives)