Strictly's Ranvir Singh breaks down in tears after show exit

‘I adore him!’ Strictly’s Ranvir Singh breaks down in tears after Giovanni Pernice praises their ‘strong connection’… as she vows they’ll ‘stay friends’ amid romance rumours

The broadcaster, 43, gushed on Tuesday she still ‘adores’ the professional dancer and she hopes to ‘stay friends’ with him, following repeated rumours about an off-screen romance between the pair.

Ranvir reflected on her Strictly experience after she and Giovanni narrowly missed out on a place in the Strictly final as they lost out to Jamie Laing in the dance-off on  Sunday night. 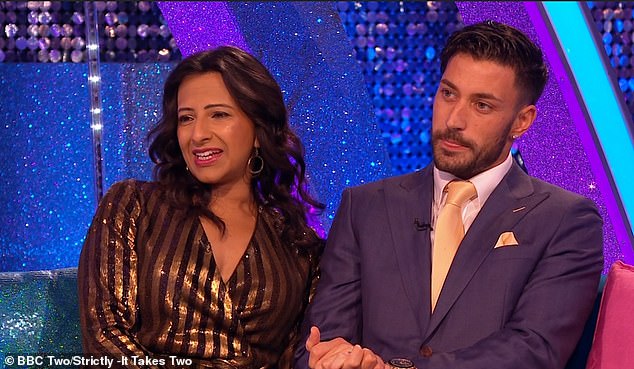 She said: ‘I sort of found myself weeping every now and then out of nowhere. It’s a strange feeling. You want to finish your story.

‘Being this close to the final, you were so close to doing the final dance and having your moment. But it was an amazing time. I thought I’d have December free, I didn’t think I’d still be there.

‘You can’t think about how many people are watching. So many women and so many people have said, you’ve really got me thinking about what I could do. 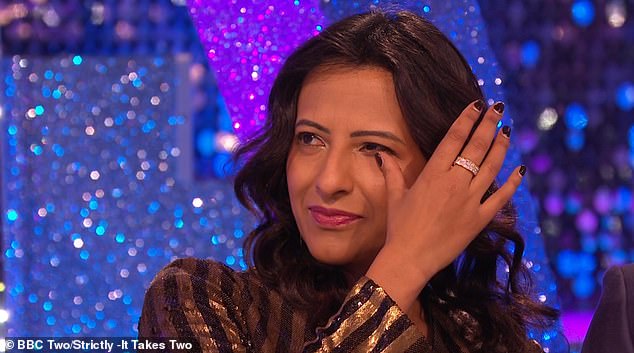 Moving: The broadcaster fought her emotions during her exit interview on It Takes Two, before going onto gush that she still ‘adores’ the professional dancer 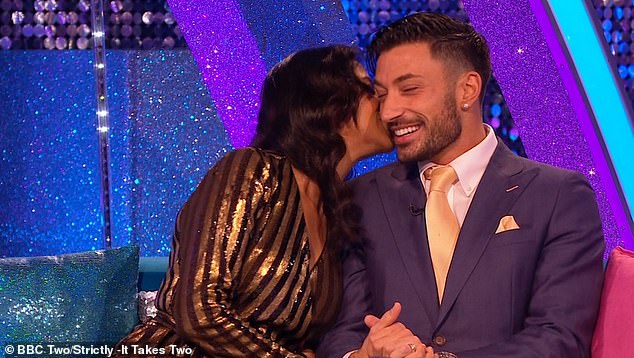 Kind: Ranvir even gave Giovanni a tender kiss on the cheek as he reflected on watching her grow into a ‘different person’ as she learned to dance

‘I could do something different for myself. I think honestly won the day in the end. Even though it didn’t get me to the final, other people have found they can relate to my insecurities.’

Ranvir added that Giovanni was a massive boost when it came to improving her confidence, saying: ‘He doesn’t accept anything less than what he thinks you can do. He’s very challenging, he’s so driven.

‘If you’re on his time you’re duty bound to be as driven as him. I found that very challenging. He had to change the way he was teaching me because I found it very difficult.

‘I was finding it so exposing. Dancing is very much look at me, don’t listen to me, just look at me. That has never been me. I’m not the sort of person who puts my body out there.’ 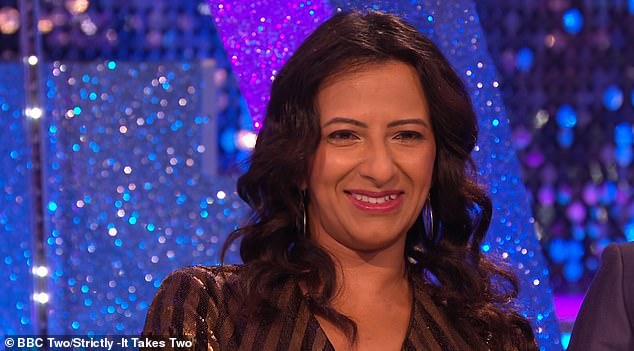 What an experience! Ranvir wiped away tears as she admitted that dancing had brought so many underlying emotions to the surface 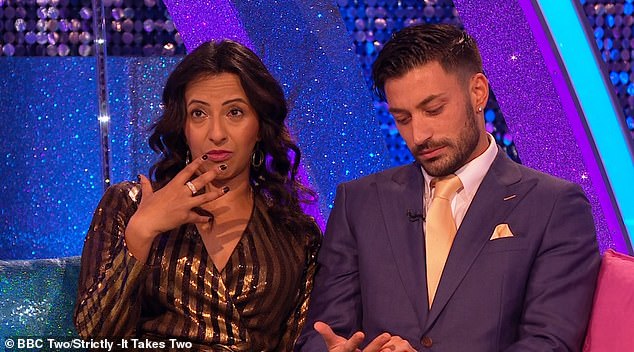 Candid: She said: ‘I didn’t know that learning to dance with someone like him would expose so much of me as a person’

Ranvir was awarded with the People’s Champion trophy by her GMB colleagues Piers and Susanna, before being asked whether she and Giovanni plan to stay in touch.

She said: ‘I’m going to see him today because we’re doing a group dance for Saturday.

‘I think we will stay friends, why not? We’ve experienced something quite deep. I adore him actually, he’s a sweet little soul.’

On Monday night Ranvir fought back tears as she paid tribute to Giovanni during their exit interview on Strictly’s It Takes Two.

The presenter even gave the pro a tender kiss on the cheek as he reflected on watching her grow into a ‘different person’ as she learned to dance. 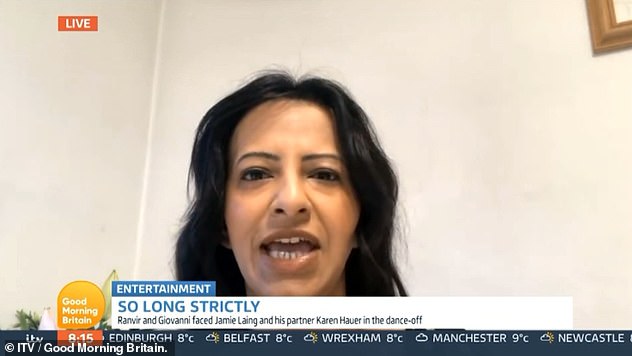 Reflecting: On Tuesday Ranvir appeared on Good Morning Britain to chat about her Strictly experience, and said she and Giovanni plan to ‘stay friends’

Ranvir struggled to contain her emotions as Giovanni praised her, saying: ‘You really feel like a different person and as a teacher that’s everything I can ask for.

‘This show’s a dance competition but it’s not all about that, and that’s the reason, I think, she maybe deserved a place in the final.’

The Italian added that he and Ranvir share a ‘strong connection’ and they hope to keep dancing when the series is over.

Ranvir wiped away tears as she admitted that dancing had brought so many underlying emotions to the surface. 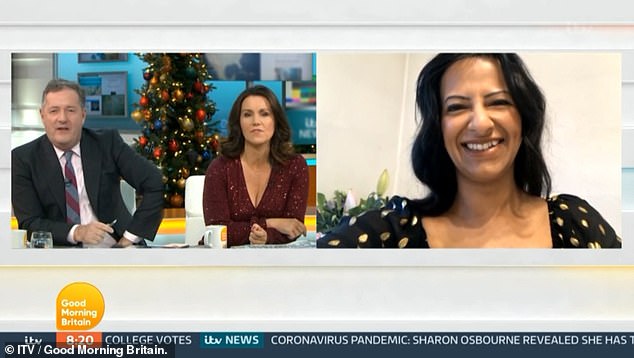 You were amazing! Piers and Susanna awarded Ranvir the title of People’s Champion, as she gushed she ‘adores’ pro Giovanni

She said: ‘It was about more than just the dancing, and I didn’t expect that.

‘I thought it was that you come in and learn a few routines and then you leave, I didn’t know that learning to dance with someone like him would expose so much of me as a person.

‘And not just on the telly that’s a different thing, kind of just in the training room it exposed so much and in a private way so much emerged out of me just our of years that you buried away. I don’t know dancing does that but it does.’

Earlier in the day Strictly pro Anton Du Beke praised Ranvir and Giovanni for creating some of the ‘best ballroom dances’ he’d ever seen in Strictly’s history.

Speaking on Steph’s Packed Lunch, he said:’ She [Ranvir] was absolutely beautiful. Her ballroom dancing has been some of the best ballroom dancing we’ve ever had on Strictly Come Dancing. Her poise is remarkable, really.’ 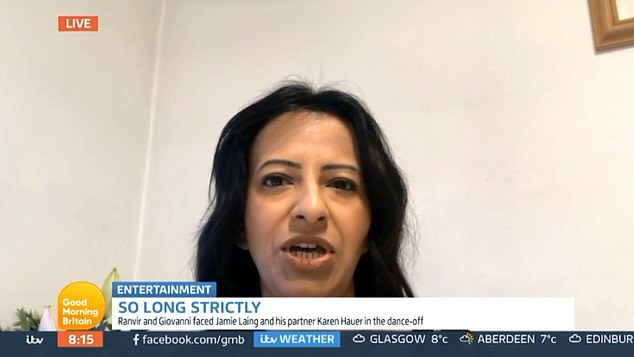 Inspiring: She added: ‘I could do something different for myself. I think honestly won the day in the end’

Anton went onto agree with Steph that Ranvir was ‘robbed’ of a place in the final, and should have gone through over Jamie Laing given she scored higher for her waltz earlier in the show.

On Sunday Ranvir and Giovanni was eliminated from Strictly after the judges opted to save Jamie and his partner Karen Hauer.

Her departure from the show means that the line-up for the highly anticipated final includes HRVY, Maisie Smith, Bill Bailey and Jamie Laing. 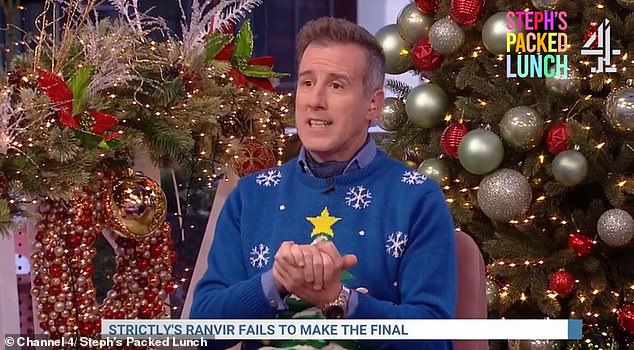 She was amazing! Earlier in the day Strictly pro Anton Du Beke praised Ranvir and Giovanni for creating some of the ‘best ballroom dances’ he’d ever seen in Strictly’s history

When asked by Strictly host Tess Daly about her time on the show, Ranvir said: ‘I’m just really sorry for him [Giovanni], he’s worked so hard and been in so many finals that I’m really sorry I couldn’t do it for you. Sorry.’

Giovanni responded: ‘You don’t have to be sorry at all, we’ve both worked very hard, you’ve been an absolute dream to work with. You are a true hero, your job at 3 o’clock in the morning then you come in the room and dance with me.

‘More than anything, you’ve grown as a person and this for me is the most rewarding thing that I could ask for, so well done to you. Well done.’

Looking back on her time on the show, Ranvir said: ‘There’s some really beautiful moments in there and so much more than I ever expected and I’m sad not to be in the final. 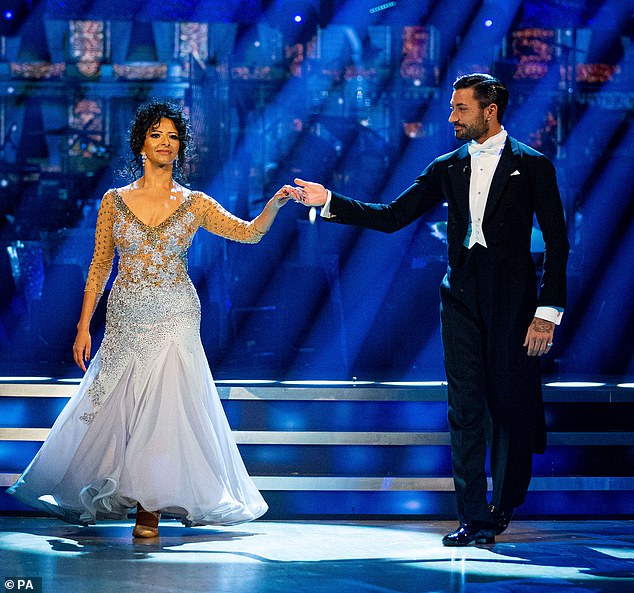 Sensational: Despite Ranvir and Giovanni pulling off a breathtaking Waltz on Saturday, a poor jive left them in the dance-off, where the judges opted to save Jamie Laing

‘But at the same time, I am glad that we’ve moved people to tears and the Argentine tango was an amazing moment. We’ve had some really fantastic memorable moments and I know I couldn’t have got this far without you.’

When asked if he had any words for Ranvir, Giovanni said: ‘I’m really hoping from this experience you just feel a better person because you truly are an amazing person inside and out.

‘Yes, you’ve grown as a dancer but more I hope you feel happier in your life because you deserve it.’ 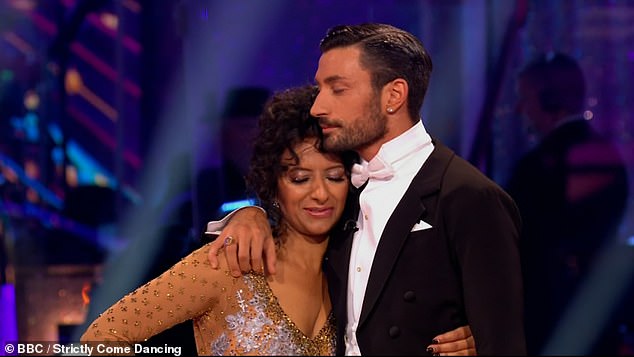 Sweet: Following their elimination, Giovanni said Ranvir had ‘grown into a different person’ during her time on the show