Home » Celebrities » Trump Mocked For Baffling ‘Prople’ Typo With Hilarious Tweets: ‘We The Prople Voted Him Out’

Trump Mocked For Baffling ‘Prople’ Typo With Hilarious Tweets: ‘We The Prople Voted Him Out’

Donald Trump made yet another bizarre typo in an angry rant, and it’s got ‘prople’ rolling on Twitter.

The prople have spoken. Donald Trump‘s latest and most bizarre Twitter typo has led to the president getting openly mocked on the social media site by users throwing it back in his face. In a since-deleted tweet Trump wrote, “THE COVID DRUGS NOW AVAILABLE TO MAKE PROPLE BETTER ARE AMAZING, BUT SELDOM TALKED ABOUT BY THE MEDIA! Mortality rate is 85% down!” The tweet stayed up for about four hours before being deleted.

The tweet responses started coming in immediately after Trump posted, and didn’t stop for hours. “WE THE PROPLE voted him out,” a comedian tweeted. “More PROPLE voted for the PROPSEN who ran against you, so that means you PROPLEY lost,” another joked. “He’ll get only the best ‘prople.’ Well #DumbDonald, you better concede because the ‘prople’ have spoken. JFC, what a moron.” Another person changed the lyrics to “Purple People Eater” to fit the theme.

One Twitter user put it succinctly: “The Prople can’t wait for you to vacate the White House.” Trump’s tweet (which has now been reposted with the proper spelling of “people”) was part of a larger nonsensical rant spanning the entire morning of November 19. That included a claim that COVID-19 vaccines are “coming fast,” and three tweets about alleged voter fraud in the 2020 election that were flagged false by Twitter. 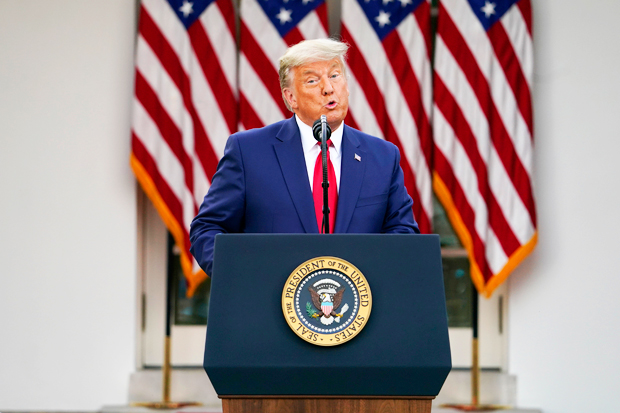 Trump, of course, is no stranger to a wild Twitter typo. Who could forget the “covfefe” controversy of 2017 — when the president tried to rally against “negative press [coverage]” and wound up inventing an entirely new word. Or that time he bragged about serving the Clemson Tigers “over 1000 hamberders” at the White House for dinner. Taking a look back at Trump’s Twitter feed, this is actually the third (at least) time he’s typed “prople.” At least this time he caught the mistake.