Peter Starkie, a founding member of Australian rock band Skyhooks, has died at 72 after falling from a ladder.

His brother, Bob, who was also a member of the group, confirmed the news on Wednesday, describing it as a tragedy and remembering the big brother he looked up to."He was still playing guitar, he was still very good," Bob wrote on Facebook. "Peter learned to play guitar while we were living in England, which was when The Beatles and The Rolling Stones were just starting, so by time we got back to Australia, he was kind of a bit ahead of his time." 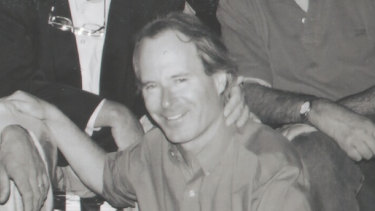 Music promoter Michael Gudinski, who signed Skyhooks to his Mushroom Records label in the early 1970s, remembered Starkie for the impact he had on the music scene in Melbourne at the time.

"He was actually a better guitar player than both [Skyhooks member] Red [Symons] and Bob," Gudinski said. "He was a very key figure in the Melbourne music scene around that time and it is just very sad."

Starkie was undertaking renovations at his mother-in-law's home in Shepparton when he fell from a ladder. He was airlifted to the Royal Melbourne Hospital but was unable to be saved.

Bob Starkie said Starkie's death was a huge shock to the family and particularly difficult to cope with in Victoria's current lockdown.

"His daughters and his partner Dianna are still very raw. It was a silly, tragic accident with dire consequences," he said. 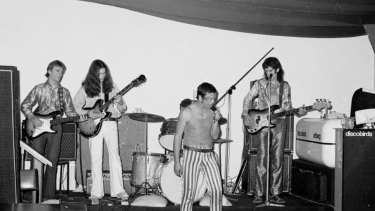 The original line-up of Skyhooks at one of their early gigs.

Starkie was part of the original line-up of Skyhooks along with Steve Hill, Peter Inglis, Greg Macainsh and Freddie Strauks and formed the foundation of what the group would become. He left the group shortly after and joined Joe Camilleri in Jo Jo Zep & the Falcons. Starkie and Inglis stayed close over the years and performed together frequently, including in the band Spanner.

"He'd want to be remembered for the lovely guy he was," Bob said. "He didn't have an aggressive personality, he was a really decent guy, a very approachable, quiet guy. From the messages I have received today everyone loved him for that."

Skyhooks were inducted into the ARIA Hall of Fame in 1992 and on Wednesday ARIA chief executive Dan Rosen paid tribute to Starkie's contribution to the Australian music industry.

"Everyone at ARIA and [in] the music industry was shocked and saddened to hear about the death of Peter Starkie," Rosen said. "He was an essential part of one of the most distinctive and singular bands in Australian history and his contribution to Australian music will not be forgotten. Our thoughts are with his family, friends and fellow band mates."

"I learned a lot about playing the guitar from him without ever knowing I was going to be in the band that he had been in," Symons said. "He had been my friend since we met at university doing the same subjects, and it was five years later that I filled the position which he had filled in the Skyhooks."

Starkie is survived by his daughters Alice, Ruby and Stella, and his partner of 20 years, Dianna.

‘Sneakerheads’ Star Allen Maldonado: Why He Wanted To Showcase A ‘Different’ Side Of Himself