AFL under fire over use of volunteer performers at grand final

The AFL and Cochrane Entertainment, the organisation engaged to produce next month's grand final entertainment, have been caught in a furore over a call-out for performers who will not be paid.

Dance schools in Brisbane and on the Gold Coast were invited by email to have dancers apply to participate in a "large scale performance" on October 24 that was looking for "strong performers" over the age of 15. 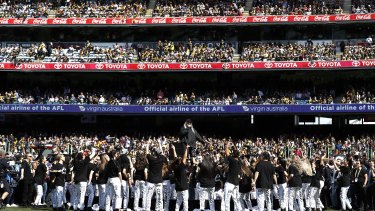 Last year hitmaker Tones and I was part of the AFL grand final entertainment.Credit:Getty

The event is the half-time entertainment at the AFL Grand Final, which will take place at The Gabba this year, with a dance ensemble of 300 people. Those who were successful began rehearsals on Sunday.

The dance community said the AFL Grand Final was an example of performers being exploited.

"If they wanted people to volunteer they would have put out a public advertisement and invited every man and their dog to take part," Melbourne dancer Elijah Ziegeler said. "They have asked for specific, professional skills. They wouldn't ask AFL footballers who have been training their whole lives to play for free. It is quite galling to see our services being exploited in such a way."

There will be two tiers of dancers used at the event: professional paid dancers will perform on stage with an as yet unnamed singer, and the mass volunteer dance ensemble. Volunteers will receive merchandise and meals during rehearsals.

Volunteer performers have been used in many major events in the past including as part of Katy Perry's performance at the Women's T20 Cricket World Cup Final and the Royal Edinburgh Military Tattoo in Sydney last year. During the Sydney Olympics more than 3000 volunteer performers were used in the opening and closing ceremonies.

“As is done for most major sporting events, including the Commonwealth Games opening and closing ceremonies on the Gold Coast, organisers try and involve as many local community dancers to take part in a mass activation,” Thea Jeanes-Cochrane, from Cochrane Entertainment, said.

“This is an opportunity to give community performers a chance on a big stage and the reason we have included it is to give an opportunity to hundreds of dancers who would never normally have the opportunity to perform in front of a crowd and a huge TV audience. They are not paid dancers – they are amateurs and this part of the program was never intended to be a performance for professionals."

Tens of thousands of performing artists are out of work due to the coronavirus pandemic with many unable to access JobKeeper as a result of the transient nature of their employment.

A spokeswoman for the Media Entertainment and Arts Alliance, the union that represents dancers, said it had been assured only dance students would be used in the production.

A spokesman for the AFL said the volunteer performers were engaged in addition to paid performers. "With the 2020 AFL Grand Final being in Queensland for the first time, our executive producers Cochrane Entertainment and our production team have asked local Queensland community and amateur dance clubs and (physical culture) movement groups to take part in a mass activation that is in addition to organising paid singers and musicians to perform on stage," he said.