Boy, bye! 16-year-old is applauded on Twitter after revealing she DUMPED her boyfriend because he told her she ‘looked like slut’ in her prom dress

A high school sophomore who was slut-shamed by her own boyfriend after she sent him a photo in her prom dress received a slew of praise online after revealing that she dumped him over the cruel exchange.

Madison Witham from Lakeland High School was so excited to show her beau the dress she bought for their upcoming prom but to her dismay the boy didn’t like her dress because it showed too much skin so she dumped him.

The 16-year-old from Indiana posted the screenshots of their text exchange to Twitter with the caption: ‘So today I bought a prom dress and dropped a dude, eventful day!’ which sent the internet into hysterics over how proud they were of her.

Dropped a dude: A high school sophomore was slut-shamed by her own boyfriend after she sent him a photo in her prom dress 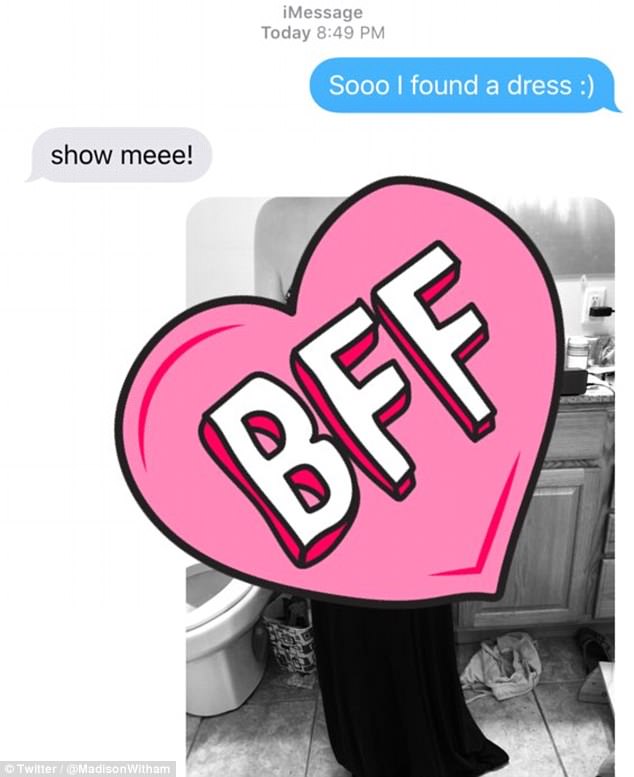 Shameful: Madison Witham, 16, a student at Lakeland High School, was so excited to show her beau the dress she bought for their upcoming prom 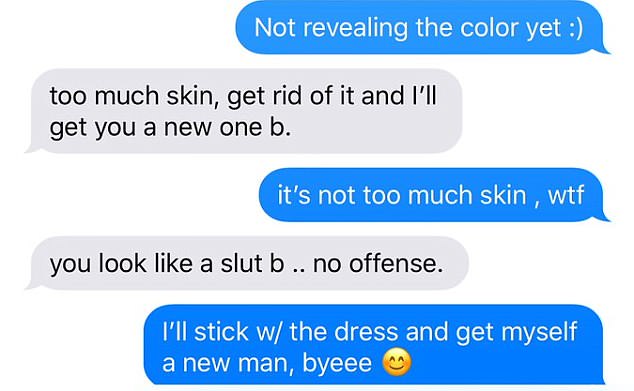 Disgusting: To her dismay the boy didn’t like her dress because it showed too much skin and he even said she looks like ‘a slut’ 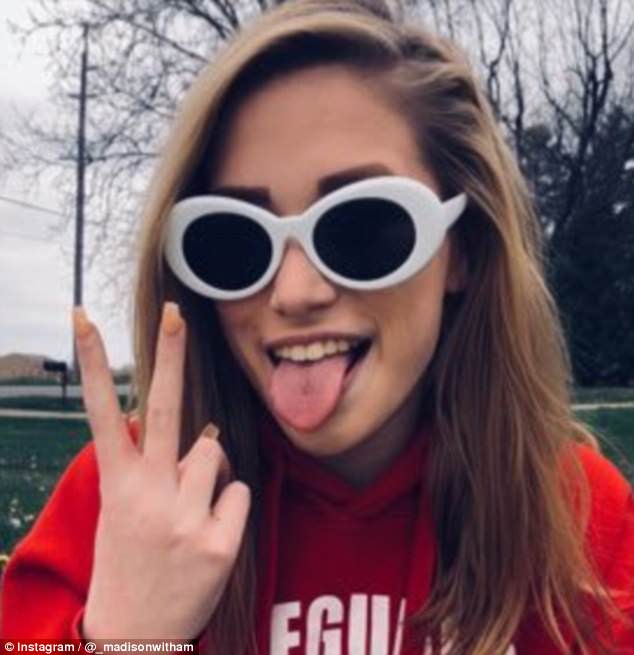 So long: Instead of giving in to him, Maddie stood her ground and immediately replied that she’ll keep the dress and get a new boyfriend instead

Maddie posted the innocent tweet of the couple’s conversation and it has since amassed over 250,000 likes and 46,000 retweets with thousands of people commenting on proud they are of her as well as how disgusted they are with her ex.

It all started last week when Madison sent a black and white photo of her in her prom dress to her boyfriend who she chose to keep anonymous, writing: ‘Not revealing the color yet,’ with a smiley face.

From the looks of the photo she posted, the dress has a slit on the front as you can see part of her legs and the top seems to be a bedazzled halter featuring a keyhole cutout down the front that shows ample cleavage.

In response to her picture, the boy wrote back: ‘Too much skin get rid of it and I’ll get you a new one b.’

Responding to her text, the boyfriend horribly wrote back: ‘You look like a slut b. No offense.’

Disgusted by his remarks, Maddie was not standing his mean comments so she took initiative and amazingly wrote back: ‘I’ll stick with the dress and get myself a new man, bye.’ 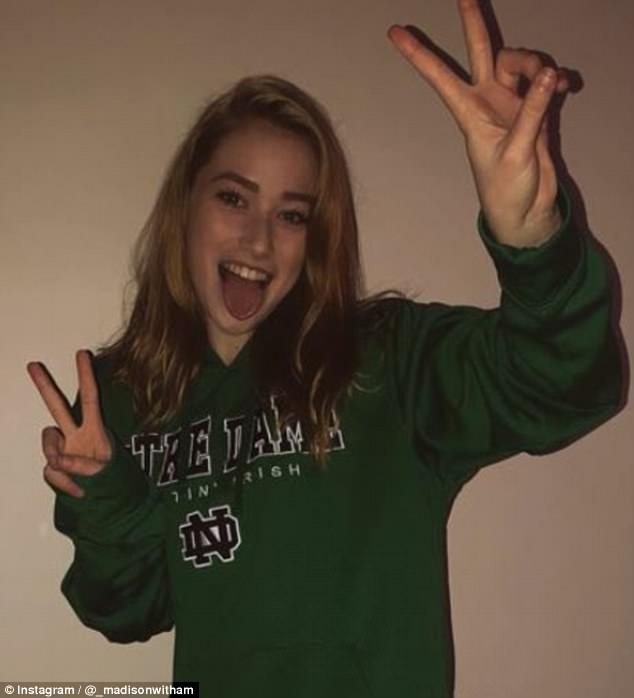 Strong woman: After Maddie posted the text exchange to Twitter showing how she dumped her boyfriend, the tweet amassed over 250,000 likes and 46,000 retweets 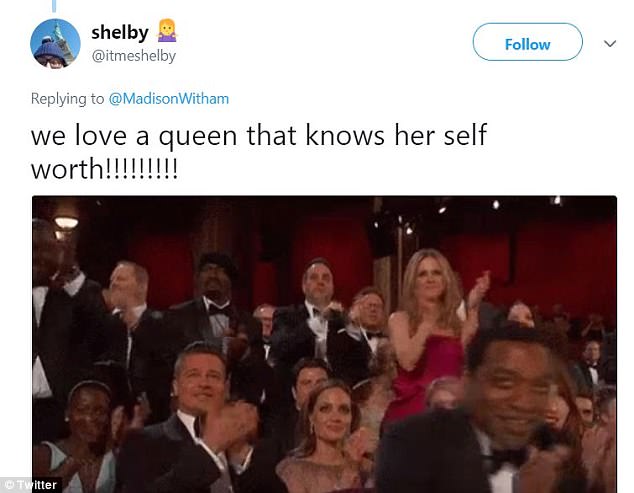 Queen: Complete strangers were commenting on her post saying how proud they were of her

Real man: One woman told Maddie to drop the boy and find a man instead

Proud: Another girl commented how proud she is of Maddie for not letting the boy control her 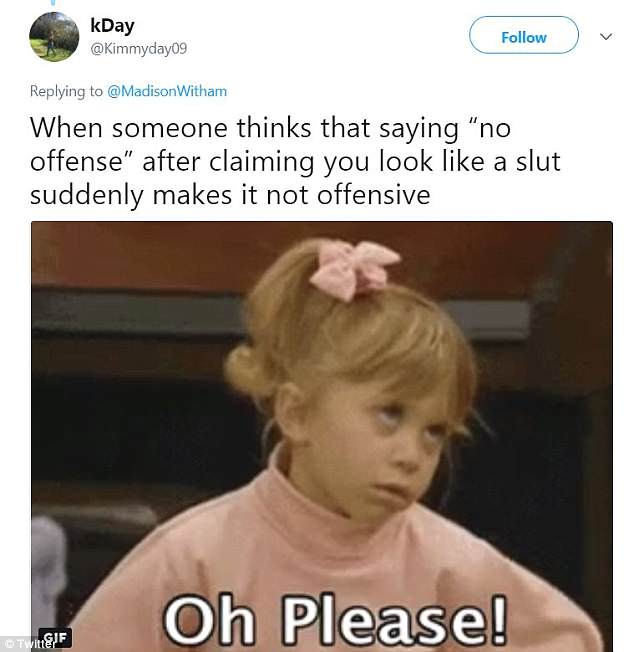 Eye roll: This user shared their disgust that the boy would write ‘no offense’ as if that would make a difference

Thousands of people came to Maddie’s defense and showed their support on Twitter with one person even writing, ‘HELL YEAH GIRL SO PROUD OF YOU.’

‘The fact that he calls you “b” is enough to dump him alone,’ one girl wrote while another replied, ‘Yes girl drop that boy and find yourself a real man!’

Meanwhile, complete strangers were backing up the student with one person confessing: ‘Idk you but I’m so proud of ya for not letting any dude control your life! If he gonna judge ya like that he ain’t the one for ya.’

‘When someone thinks that saying “no offense” after claiming you look like a slut suddenly makes it not offensive,’ someone quizzically wrote.

One man who stepped up to the plate even offered to be a stand-in for her prom date writing: ‘If you need someone to give you a great night and treat you the way you deserve let me know. You deserve better than that. Respect.’

Mom: One user who was a middle-aged mom shared her two cents and gave Maddie some dating advice

The dress: While many people defended Maddie and shared how amazing they think she is, others were dying to see the dress

Show us! Tons of people commented on her tweet begging her to show them the dress 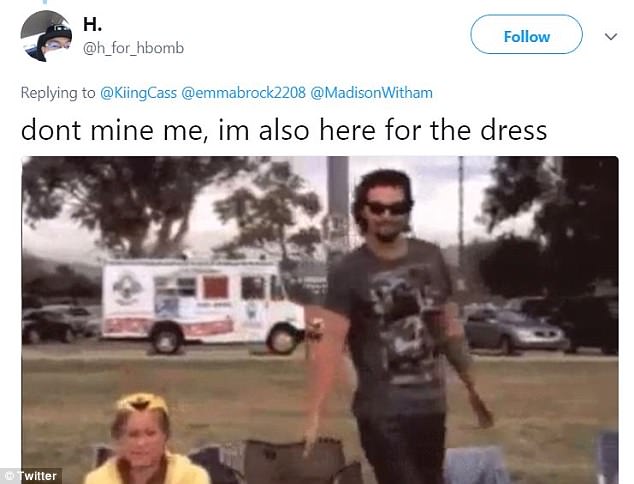 Don’t mind me: Another user wanted to see the dress but Maddie said she won’t show it until prom day 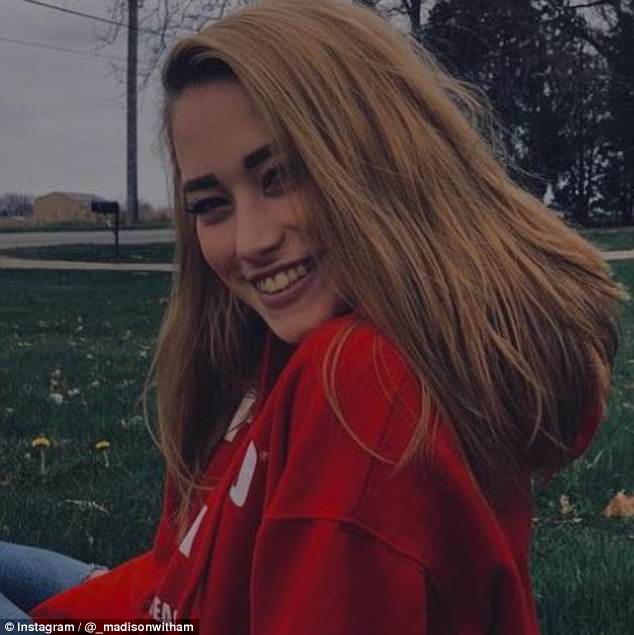 Independent: Maddie is no longer dating her boyfriend and said she posted the texts to show people how mean he was to her but never expected it to go viral

In response to the texts going viral, Maddie admitted to Insider that she was blown away by all the support and it was never her intention to earn so much fame.

‘I put it on Twitter just to expose him and show how mean he was to me. I was so surprised when I saw that it went viral because I did not even mean for it to go viral,’ she told the site.

Maddie also confirmed to the site that she is broken up with her boyfriend and told people to be on the lookout for her dress which she will post to Instagram when prom rolls around.

Prom season seems to be bringing out the worst in people as just recently another high school student named Maddie who is also from Indiana, believe it or not, was fat-shamed by internet trolls regarding her prom photos.

After Maddie and her boyfriend Tre Booker attended prom they both posted photos of their looks and random people started bashing Maddie for being ‘too fat’ to wear the pink sequin gown she chose to wear.

However, the difference is that Tre is a stand-up guy as he shut down all of the haters who were being mean to his girlfriend and even wrote: ‘God made you just for me!’