Days after making her Twitter private, Cardi B is back on the social media platform to publicly weigh in on her now-controversial collaboration “Girls” with Rita Ora, Charli XCX and Bebe Rexha.

The pregnant rapper made sure to apologize for the track released last week that explores bisexuality, which many, including performers Katie Gavin and Kehlani, have criticized online. Last Friday, singer Hayley Kiyoko, who is openly gay, took to social media to call the tune “tone-deaf” and “dangerous.” Many commenters online have echoed the “tone-deaf” sentiment.

On Tuesday, Cardi apologized on Twitter, writing, “Listen to ‘GIRLS’ by Rita Ora ft me @BebeRexha @charli_xcx .We never try to cause harm or had bad intentions with the song .I personally myself had experiences with other woman ,shiieeett with a lot of woman ! I though the song was a good song and i remember my experience [sic].”

On the criticism that the words and terminology used in the song was offensive, Cardi tweeted, “I know i have use words before that i wasn’t aware that they are offensive to the LGBT community .I apologize for that .Not everybody knows the correct ‘terms’ to use.I learned and i stopped using it [sic].”

Alluding to the slur “d-ke” used in the song, Cardi added, “My own friends be like ‘I’m a d-ke so i never thought it was offensive word. I was like wtf.” 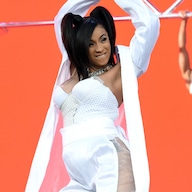 In “Girls,” Cardi raps, “Now I could be your lipstick just for one night (one night) / Girls just wanna have fun, they have their funds right (yeah) / I mean, say my name, say my name, say my name (say my name). It tastes good just running up your tongue, right? (hurrr) / I put this smack on your lips all so pucker up (mwah) / We ain’t never heard of you ’cause you ain’t gun enough / And I don’t gotta introduce myself (Cardi) / I’m too sexy, I seduce myself (Bardi) / Seven figure, never need a n—a (nope) / I steal your chick, have her down with the scissor / Tonight, I don’t want a dog, I want a kitten / I might french your girls and break bread.”

The rapper’s public apology comes one day after Ora apologized to fans via a Twitter statement.

Yesterday, Ora wrote, “Girls was written to represent my truth and is an accurate account of a very real and honest experience in my life. I have had romantic relationships with women and men throughtout my life and this is my personal journey. I am sorry how I expressed myself in my song has hurt anyone [sic].”

In a previous statement, the British pop star called “Girls” a “celebration of love” “inspired by all the strong women I’ve seen who aren’t afraid to be themselves.”