Spoilers for the Westworld Season 2 premiere. Just when things were going so well for Dolores… The Westworld Season 2 premiere shows the newly self-aware host leading the park’s artificial inhabitants in a bloody uprising against their human overlords, literally gunning down Delos board members from horseback as they run away in terror. But her revolution seems destined to end almost as quickly as it began, if that shocking cliffhanger is any indication. What happened to the hosts on Westworld? Who or what killed them all?

Much like Season 1, the sophomore season of HBO’s sci-fi/Western is playing around time; but unlike, Season 1, it’s being upfront about it this time. The premiere establishes two timelines right off the bat: one that picks up right where Season 1 left off, as Dolores continues her bloody rampage through the park; and one that picks up two weeks later, as a disoriented Bernard wakes up on a beach during clean-up efforts led by new characters Karl Strand (Gustaf Skarsgård) and Antoine Costa (Fares Fares) — along with Ashley Stubbs, who is apparently just fine after his run-in with the Shadow Nation at the end of Season 1.

In this second, later timeline, it doesn’t appear that things have gone well for Dolores’ rebellion. Humans are reclaiming the territory she and her host army took for themselves, rounding up any hosts they can find and executing them on the spot. As if all of that wasn’t bad enough, an even bigger shock comes at the end of the premiere. Having noticed that all of the hosts seemed to be clustered at one spot, Strand and his team head out there to see what they were up to. But they don’t find the hosts having a robot convention in the middle of the desert; instead, they find a large lake that isn’t supposed to be there… and all of the hosts, including poor Teddy, floating dead in the water. 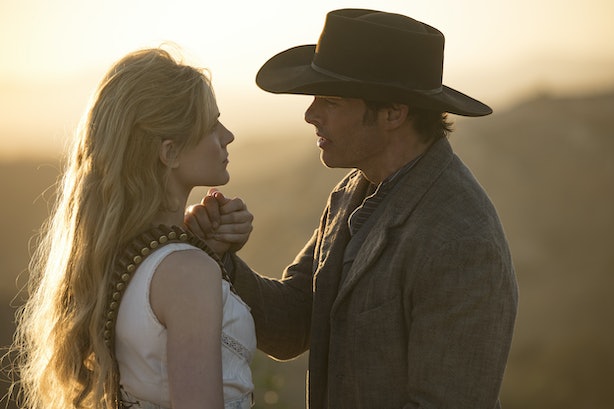 So what happened to them? Bernard claims to have killed them all, but given his spotty memory and the twisty nature of the show, I doubt it’s that simple. He could have been involved in whatever went down, though. Even if he didn’t directly murder each one of the dead hosts with his own two hands, he could have taken actions that led to their demise. In the earlier timeline, Bernard is helping Charlotte locate Peter Abernathy so she can complete her mission of smuggling the data implanted in his mind out of the park, afraid that if he refuses or acts strange at all, she’ll discover that he’s really a host. But if Charlotte were to succeed, she just might be ruthless enough to kill all of the hosts left in the park in order to ensure that she is the only one left with Ford’s proprietary technology… and thus holding all the power. By helping Charlotte, Bernard might therefore feel responsible for the deaths of the hosts.

Alternately, it’s possible that Dolores is the one who killed all of the hosts. Viewers have seen just how ruthless she has become since gaining consciousness, literally shooting unarmed people in the back and stating her desire to take over not just Westworld, but the entire outside world. If she somehow learned that one of the hosts was hiding data in his head that was going to be smuggled out of the park to be used against them, she might stop at nothing to ensure that didn’t happen — including killing every one of her robotic allies just to be sure. (Adding to the irony is the fact that the host in question is her beloved father, Peter Abernathy.)

Or maybe the shot of poor dead Teddy is a red herring, and he’s not a victim of the massacre… but its perpetrator. He seemed pretty dismayed by Dolores’ newfound brutality in the season premiere, and if the lovers continue to drift apart, he might find himself compelled to stop her bloody path to world domination by decimating her army… including himself. After all, the hosts are found in a body of water that somehow materialized in the middle of the desert, and what is the cowboy’s full name? Teddy Flood.