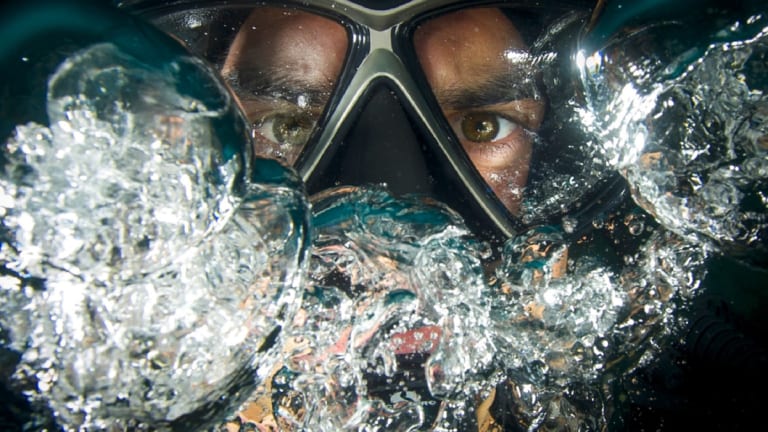 Virtual reality and theatre might seem an unlikely match but producers 'curious directive' have decided to swipe right anyway.

Frogman, billed as the first VR play, proves a bit of an awkward blind date between an emerging technology and an established art form but will interest anyone curious about the potential synergy between them.

Blending live solo performance with pre-filmed scenes in simulated environments – experienced via VR headsets you put on at various points during the show – Frogman deep-dives into a mystery set in Queensland in the mid-'90s.

In live sequences, young marine biologist Meera (Georgina Strawson) is interrogated by police about the disappearance of her childhood friend decades earlier. Ashleigh, a plucky loner from the wrong side of the tracks, was 16 when she went missing. A stolen speedboat she was in sank over the Great Barrier Reef; she was presumed lost at sea. Meera’s dad, a police diver, found Ashleigh’s backpack in the depths but not the body.

And there the mystery was laid to rest, until suddenly the boat is salvaged with incriminating blood samples still intact and the cold case reopened, with Meera’s father suspected of murder.

Spliced between the live theatre are extended VR set pieces. We get transported back to the bedroom of an 11-year-old Meera (Ava Ryan), with her friends Shaun (Sol Castanho) and Lily (Indiah Morris). It's a colourful, lovingly detailed recreation that feels like a half-forgotten childhood dream.

There are scuba-diving scenes over the reef and while these should be a spectacular drawcard, weirdly they’re the weakest link. Whatever sense of wonder and awe you might otherwise feel at the reef’s natural beauty gets bleached away by the mechanics of VR: the oppressive headset is hard to ignore, the graphics bend into asymptotic squiggles if you look directly up or down, and the quality of the underwater film isn’t good enough to immerse you fully.

The VR feels more liability than asset. All the challenges of using film in theatre are present, plus a few more, and until the tech is miniaturised and made as easy as 3D-glasses to use and remove, hybrid work like this is probably going to be clunky.

Another sign we’re still in the realm of gimmickry is that we’re told we’re members of a jury and must pay attention to the evidence we see in VR. But in the end we don’t actually have to decide anything, or get to influence the action in any way.

But the performances carry it over the line: the children do a superb job at making you feel like a fly on the wall and Strawson is understated and moving.