It took Karen Corbett two decades to realise that what she’d experienced as a young woman was homelessness.

“I was pregnant. I was on the run,” the award-winning theatremaker, now in her 60s, says. “I went to a home for unmarried mothers … from caravan to caravan, to couch surfing, to living in a boys’ boarding school when nobody was there during the holidays … [but] I didn’t consider it homelessness.”

Many people equate the term with living rough on the streets but, says Corbett, “the general nature of women’s homelessness is that it’s couch surfing and living in cars – a friend of mine raised her three children from a car''. 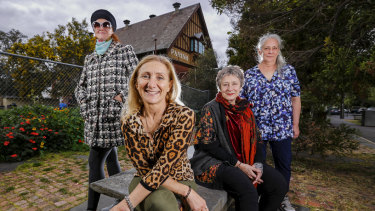 Corbett now lives in public housing but today’s growing demographic of older women experiencing homelessness – a 31 per cent jump in the last five years, Census data shows – is close to her heart.

“In the past, older women were invisible [on film and TV],” she says. “Then they were visible but … they all had houses, they all had enough money and they all had lovely clothes and my friends and I said, where the f— are we in this picture, really? Where are women living on the edge in their 60s? And so we decided to write about it.”

The result is UnHOWsed, written and performed by eight women, including Corbett, who have experienced homelessness.

These are our experiences, and I’m here. Look at me. See me.

Directed by Deborah Leiser-Moore, the show is layered with song, poetry, movement and speech.

“Their stories come out in different ways [but] it’s not about dwelling on all of that,” says Leiser-Moore. “It’s funny and real and raw.”

Corbett says for most of the cast members domestic violence was a factor in their stories. Many of the women in the play reveal events going back to childhood that inform how they got to where they are today.

Cast member Maurya Bourandanis didn’t experience homelessness until she was a grandmother.

“This can happen to any of us,” she says, and “some of it is still traumatic.” Corbett is a trained trauma therapist and provides counselling support to the group.

“It’s not depressing,” Leiser-Moore says. “I really want to stress that. Some of the stories are tough but there’s so much humour in it … The whole thrust of this piece is: these are our experiences, and I’m here. Look at me. See me."

“We still crack ourselves up on stage,” says Corbett, who initially wasn’t sure how she could interest the public in “a bunch of old ladies on stage”.

Now, she says, “I haven’t been this excited about theatre since I did Godspell at the age of 17".

“I feel like this is my next big one, even though I’ve done heaps of theatre in between and toured the world. This is beautiful … it’s the best show I’ve ever been in.”

The project has been possible thanks to funding from Theatre Works and City of Port Phillip, along with plenty of in-kind support. Bunnings is supplying the set, while the Christ Church, next to the theatre on Acland Street, has donated its beautiful interior as a rehearsal space. Much of the play was written by the cast in the adjacent kitchen over lunches, laughter and cups of tea.

UnHOWsed by Tashmadada and Voices of the South Side is at Theatre Works, St Kilda, October 23 to November 3. Tickets from $32.50 except for October 26 and 27, which are “pay what you can”.