Home » Lifestyle » Get ’em while they’re young: Opera’s plan for a new generation

Get ’em while they’re young: Opera’s plan for a new generation

Caught off-guard by the power of Georgia Wilkinson’s voice, a girl in the back row begins to cry – then tries to mask her tears with a yawn. Not that her classmates notice; they’re equally enthralled by Wilkinson’s soprano singing. “Can she shatter a glass?” one boy asks.

“Only if she knocks it over,” replies teacher Angus Grant. 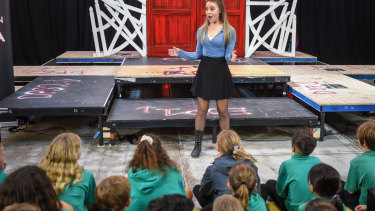 Spending less money on travel allowed the company to extend its program to four weekly cyber-workshops. Each lesson focuses on a different aspect of Alice Through the Opera Glass, which melds well-known opera numbers with a new story about Lewis Carroll's beloved characters. Today, the children spend time with the cast; next week, they’ll meet the costume and set designers. In June, they’ll attend a performance of Alice at the Arts Centre.

I thought opera was for old people because my grandmother loves it.

“Seeing it on stage is important,” Salmanidis says. “It helps them link all the different elements they’ve learned.”

It's a world away from the dreary music classes of yesteryear, where children were forced to rote-learn the names of important composers. This meant the very essence of opera – its drama,  romance and spectacle – was absent from its teaching, allowing misconceptions to flourish. 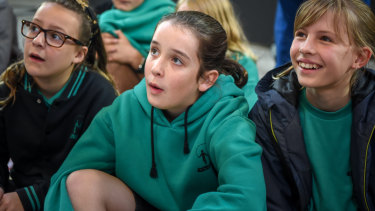 “I thought opera was for old people because my grandmother loves it,” says Stefanie, a student at Collingwood College. “But I really liked how Georgia could make her voice so high, and I’m thinking maybe I could do that when I grow up.”

Classmate Arlo is also considering a performance career. “My voice is loud but that means my breath comes out too quickly,” he says. “I really need to do a lot of training.”

Their enthusiasm is no surprise to Grant, an experienced music educator.

“When kids hear this kind of singing, you actually see a physical reaction,” he says. “They’re not prepared for the emotion.” 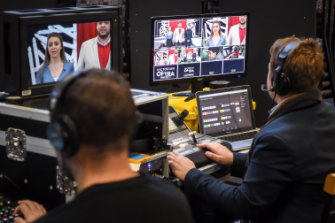 Victorian Opera’s Access All Areas program is live-streamed to 50 primary schools across the state.Credit:Justin McManus

When Grant asks the students, “When did opera begin?” one boy guesses, “100 years ago.” Most of his classmates agree – and they’re stunned by the correct answer. But Grant is careful not to portray opera as an antiquated art form.

“We say to the kids, ‘When you see a character in a film who looks perplexed, pay attention to the music underneath. See how that music is telling you how to feel? Well, that comes from opera.”

In its earliest days, opera was not observed in silent reverence; instead, audiences would whoop, holler and cheer.

“That’s one of the joys of working with these kids,” Grant says. “They laugh and giggle and make all these ‘ooh’ and ‘aah’ sounds. It almost feels like we’re in a 17th-century opera house.”

Producers respond to rumors ‘Ellen DeGeneres Show’ will be canceled

‘Sex Education’: Netflix Show On Track To Go Back Into Production In August