Girlfriends livid after their boyfriends joke about cheating on them

What REALLY happens on a lads’ holiday: Girlfriends spy on their unsuspecting partners and catch them flirting, lying about being engaged and even rapping about cheating

Five women who were given a fly-on-the-wall view of their partners on a lads’ holiday quickly ended up in tears when they witnessed the boys’ antics.

Five girlfriends put their partners to the test in the second season of Undercover Girlfriends, which airs tonight on Channel 5, which sees five men head off to Greece, believing they’re being filmed for a reality show.

What they didn’t realise was that their girlfriends were secretly watching their every move to find out if they could be trusted.

And Sophie, 19, was quickly overwhelmed when her boyfriend of nine months Ben, 22, started rapping about cheating on her early on during the trip.

Newly-engaged Chantal, 19, who doesn’t trust her boyfriend of two years, Joe, after he cheated on her during a trip to Ibiza was left in tears when he failed to mention his future wife to a hostess the girls sent to the villa as a test.

And Ines, who’s been with Matthew for the past three years, also ended up crying when she saw him speaking to a girl at a local club. 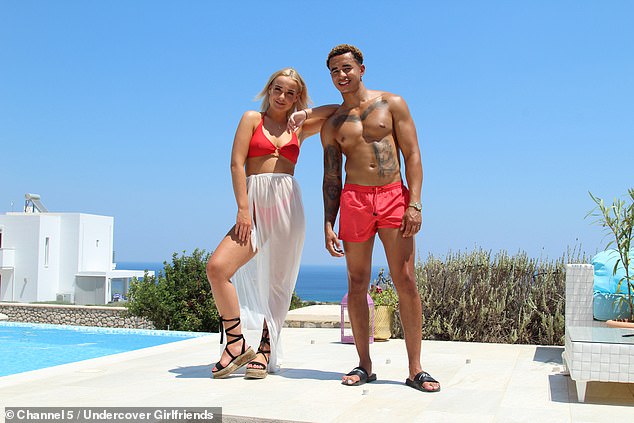 Sophie, 19, and Ben, 22, have been together for the past nine months. But trust between them has been broken after Sophie caught her boyfriend texting another girl. They are among the five couples featured on the new season of Undercover Girlfriends 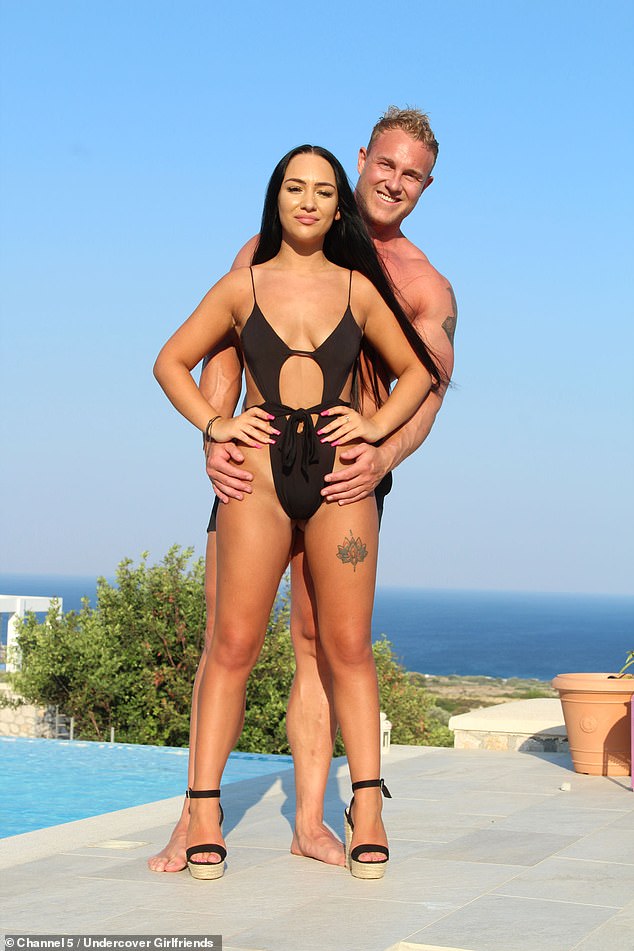 Ines says her boyfriends of three years and a half Matthew is perfect, expect when he’s showing off his muscular physique for attention after having a few drinks 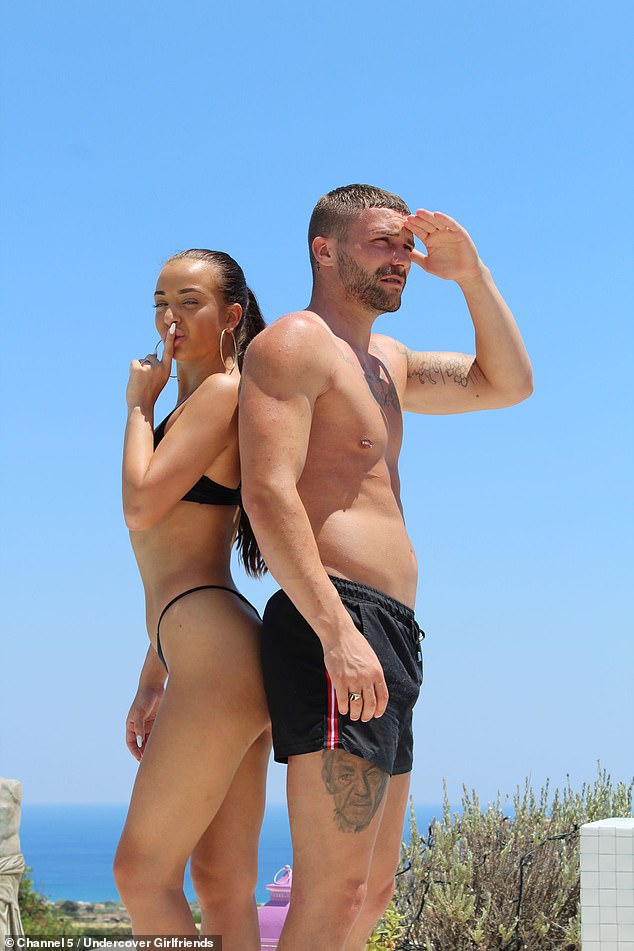 Models Chantal and Joe, both 19, are engaged. But Chantal’s family cannot forgive for cheating on her during a trip to Ibiza. The young woman hopes Joe can prove he’s a changed man

While ‘mature’ Steph wanted to see whether Aaron could be responsible and committed to their relationship, Ellie wanted to see if she could trust Saeen again after he cheated on her.

Right away, student Sophie was worried about fitness instructor and rapper Ben.

‘Before we met he was a bit of a ladies men,’ Sophie explained. ‘I don’t know if I really trust him.’ 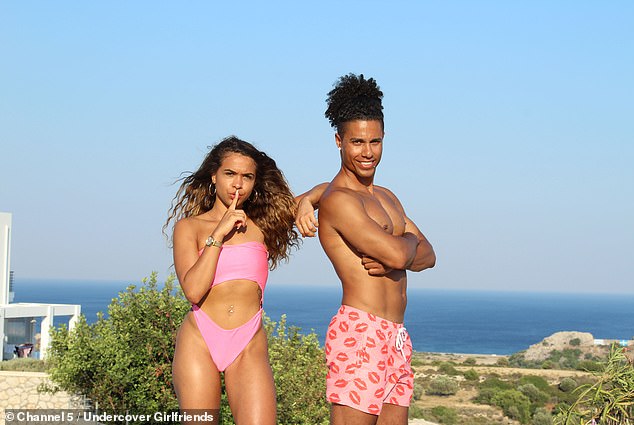 19-year-old Steph and 32 year old Aaron started dating over a year ago. The young woman wants to know whether her Peter Pan-like boyfriend can finally grow up and take their relationship seriously 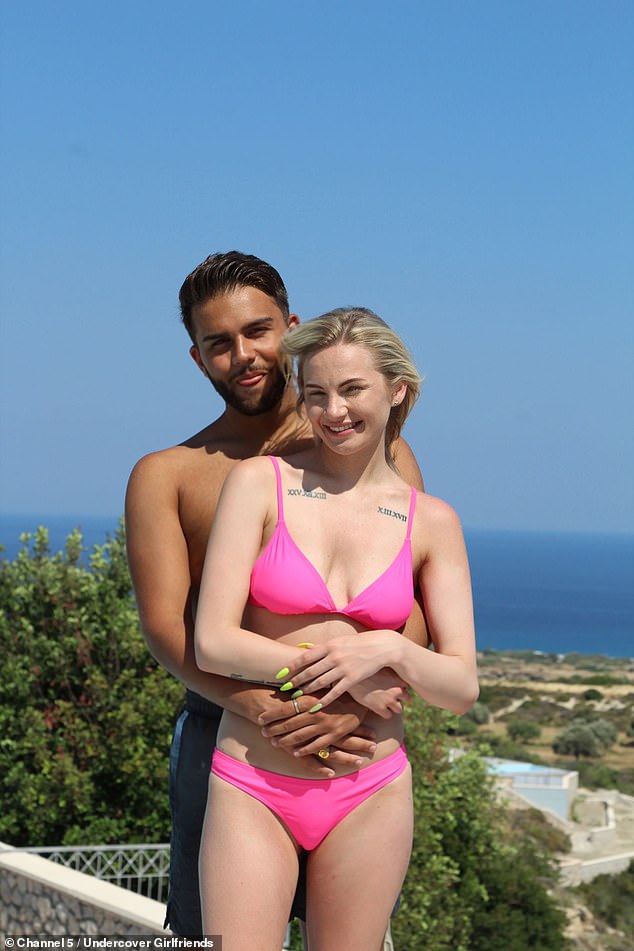 Saeen and Ellie have been dating for nine months. But their relationship took a tole when he cheated on her. Ellie hopes she can trust Saeen again, but is not sure she can

Despite being adamant that is flirtatious ways are in the past, Ben could not resist showing off in front of his new friends.

In the taxi on the way to the villa where they were staying, he improvised a rap, saying: ‘I told my girlfriend I won’t cheat but I can’t guarantee it.’

It was a blow for Sophie, who admitted she can be naive when it comes to Ben because he’s her first boyfriend.

While Sophie stepped away from the room to cry outside, Ben continued his taxi conversation with Saeen and admitted that he loves Sophie. 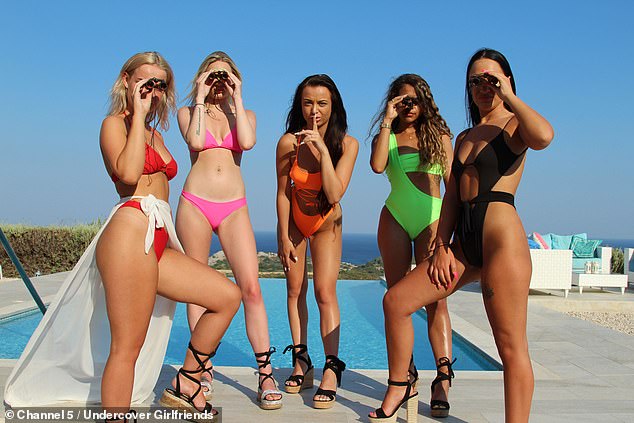 From left to right: Sophie, Ellie, Chantal, Steph and Ines. The girls will spy on their men’s every move during the programme

Later on in the episode, the girls got ready to spy on their men as they headed for a night out.

‘Tonight is a big night,’ Sophie said, explaining that Ben hasn’t been on a night out without her since she caught him texting another girl

Ben redeemed himself by saying he wished Sophie was on the holiday with him, and  she was able to relax.

Meanwhile, Chantal wanted to prove that she’s able to trust Joe again after he cheated on her during a holiday in Ibiza, but he got off to a bad start by acting up in front of his new friends. 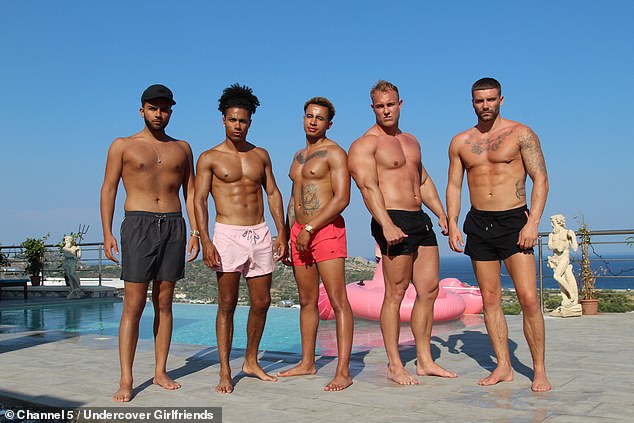 From left to right: Saeen, Aaron, Ben, Matthew and Joe. The boys have no idea their girlfriends are checking in on them 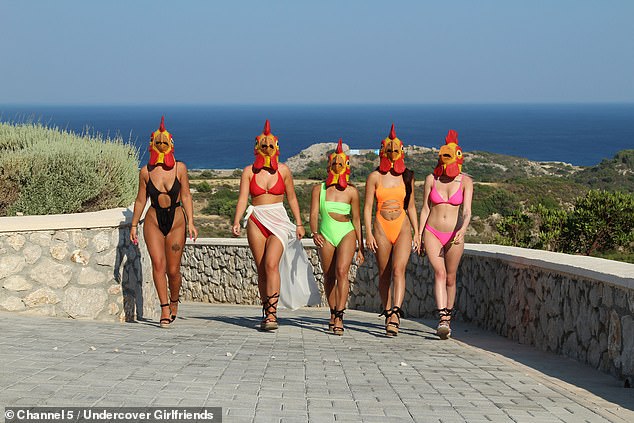 Talking to the  boys, Joe said that having a girlfriend ‘is a full-time job,’ which prompt Chantal to protest: ‘That’s not him!’

When two hostesses were sent to the boys villas by their spying girlfriends, Joe failed to mention right away that he’s engaged, which drove Chantal to tears.

‘It has really hit home because I never thought I would see that side of Joe,’ she said.

‘This is the old him,’ and I just worry he’s gonna change.’

When the boys headed out for a night of clubbing, Sophie told  Chantal to ‘hope for the best, expect the worst.

However, too busy with having fun with his friends, Joe didn’t even look at other girls on the dance floor, which reassured his fiancée.

The biggest blow came for Ines, who’s been dating boyfriend Matthew for three and a half years. 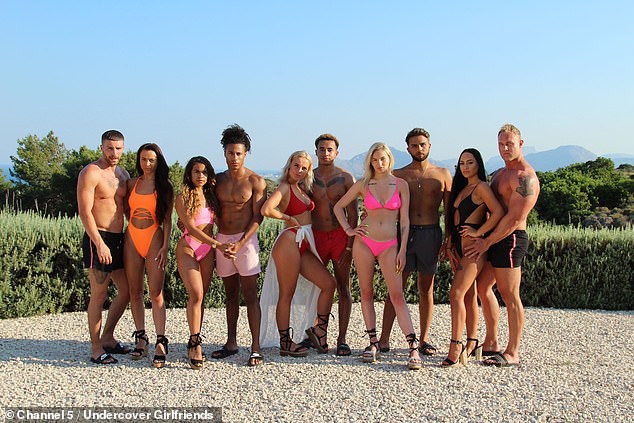 All the couples paired up. Joe and Chantal, Steph and Aaron, Sophie and Ben, Ellie and Saeen and Ines and Matthew all feature on the new season of Undercover Girlfriends

While Ines said early on in the programme that Matthew is perfect, except when he drinks, she did not seem to suspect him of ever being unfaithful.

She admitted that she doesn’t like how her boyfriends gets when he’d drunk, because he likes to take his shirt off and show off his muscles and strength.

As expected, Matthew, who admits he likes the attention, started to strip in the club.

Afterwards, a woman came up to him and they started to chat, with Matthew placing his hands on their hips.

Ines became increasingly aggravated when Matthew failed to mention he has a girlfriend.

She eventually left the room in tears when the others suggested Matthew should ‘go for it’ with the attractive stranger. 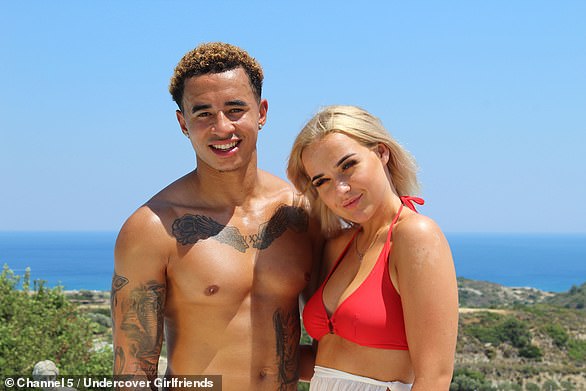 Sophie, 19, and Ben, 22 started dating nine months ago, but the young woman doesn’t know if she can trust her rapper and fitness instructor boyfriend.

Ben used to be a ladies’ man, and while he insists those days are behind him, Sophie is not sure whether he’ll stay on his behaviour while away.

Sophie admits she’s been called ‘naive’ regarding her relationship with Ben, but adds he is her first ever boyfriend and that ‘when you know, you know.’

Sophie caught Ben texting another girl recently and wants to know whether he can be true to her.

Sophie explains she wants to know whether Ben has changed. 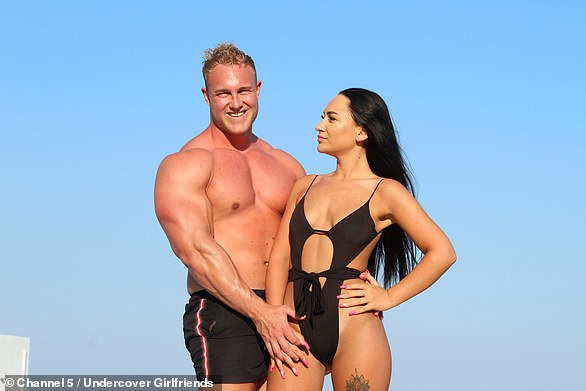 Ines thinks Matthew is perfect, but cannot stand to see him talk to another girl while on a night out

Ines and her boyfriend Matthew met on Tinder three and a half year ago.

Ines says her boyfriend is perfect, except when he drinks.

She told him she loved him within a date of knowing each other.

She is annoyed by his tendency to show off his strength and physique while on night outs.

She says the behaviour sometimes ‘puts her off’ her own boyfriend. 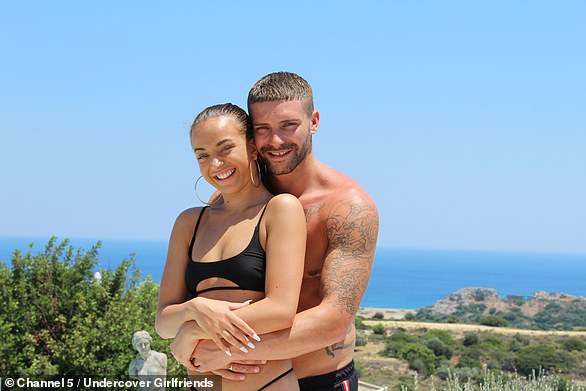 Chantal hopes Joe is a changed man, after he’s cheated on her during a trip to Ibiza, but doesn’t like seeing him showing off in front of the lads

Model Chantal, 19, fell in love with part-time model Joe, also 19, when they first met two years ago, and admits things have been going really fast between them ever since.

Joe is the one to have said ‘I love you’ first, but he cheated on Chantal with two women during a holiday in Ibiza.

Her father and brother never forgave though for treating Chantal this way, even though the couple are now engaged.

The young woman hopes to prove that Joe has changed and is a new man that can be true to her and their commitment. 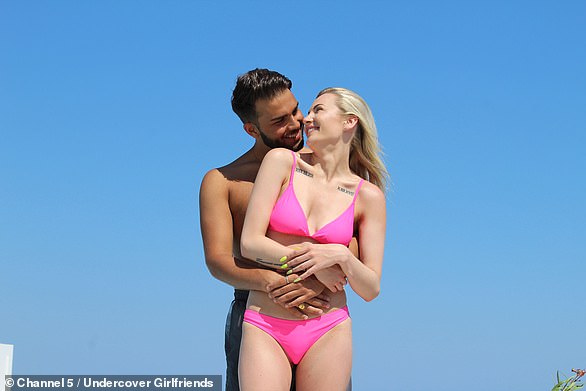 Saeen didn’t want a girlfriend but Ellie snatched his heart. The young woman struggles to

Ellie, 18 and Saeen, 19 have only been dating for nine months, and at first, the young man didn’t want a girlfriend.

When they finally got together, Saeen cheated on Ellie a few months later, putting their relationship in jeopardy.

Ellie says she doesn’t know if she can trust him again, but is hoping to learn to do so during the social experiment.

Steph and Aaron – One year 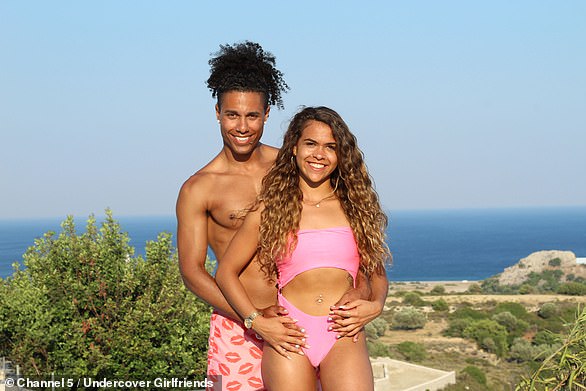 Aaron pursed Steph, 12 years younger than him. But noew the young woman hopes to see that he can act like a grown-up

Aaron pursued Steph on a trip in Napa a little over a year ago.

Steph, 19, fell for the spontaneous 32 year old, but says he doesn’t act his age and can be immature at time.

Aaron admits he didn’t think the relationship would last.

“I was angry at myself for not having a smear test”

The Life of Us review: Overwrought songs let down characters