The letters are newsy, affectionate and chatty. Above all, they are testaments to a grandma’s abiding love. Sue Ward has been writing them fortnightly to her absent grandchildren for the past seven years.

‘We all love and miss you and talk about you, wondering what you are doing — so much.

‘Please don’t forget you have a whole family who love you and would love to see you,’ she implores. Each letter is signed with lots of love and hugs, Nana and Grandpa. 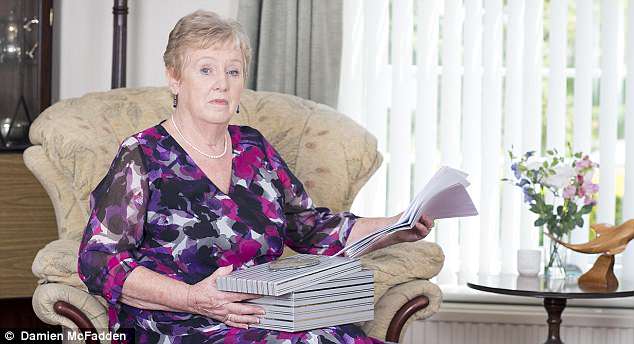 Although grandmother Sue Ward has been prevented from seeing her grandchildren since her former daughter-in-law divorced her son seven years ago, she writes touching, chatty letters to her grandchildren every fortnight

Yet Sue, 67, never gets an acknowledgement that they have been received, much less a reply. She could be sending them into an abyss: they may be thrown away before they are opened.

They may not be aware of how much she adores them, how fiercely she misses them, how their departure after their parents’ divorce has left an aching chasm in her life. 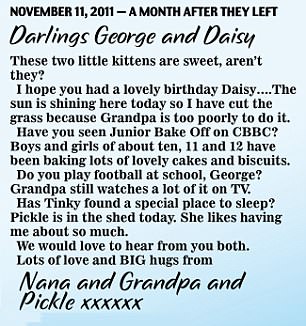 Yet still Sue clings on to hope. Still she writes. ‘Not a day goes by when I don’t think of them,’ she says. ‘It does not get any easier.

‘Sometimes I discover a little postcard or memento and the tears start. On good days I get by. On bad days I just cry.

‘In moments of madness I think I could just get in the car and drive to them, but I’m nervous about their reaction. Would I even recognise them?

‘I look at girls of 13 and think, What does my darling granddaughter look like now? Does she wear her blonde hair long?

‘I imagine my grandson is tall now, and he might have a deep voice. But they’re strangers.

‘I keep copies of all the letters I write to them in case one day we’re reunited and I can say, “Look, I always thought of you. I never stopped loving you”.’

The siblings were aged just eight and six when, in 2011, they ceased to be part of their grandparents’ lives. Their parents’ marriage had broken down and their mother — Sue’s former daughter-in-law — moved to another county. 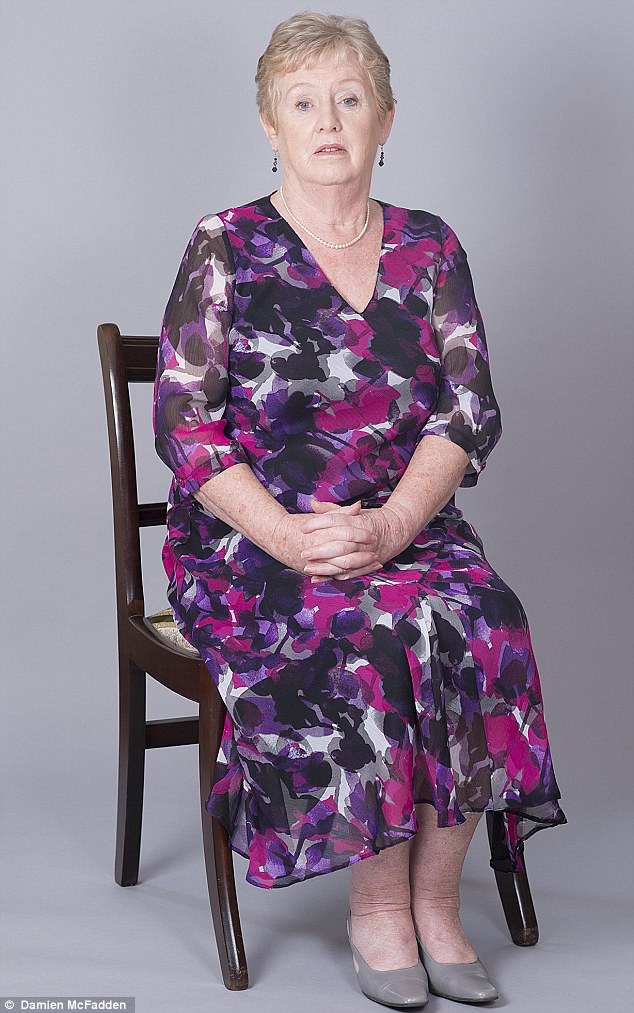 Heartache: Sue Ward, 67, has been estranged from her grandchildren for seven years, but cherishes memories of seeing them in nativity plays and eating ice creams at the last summer fete they attended together

Sue and John, 84, have not seen them since; neither has their father, Sue’s son Mark, a 41-year-old civil servant. It is the desperately sad situation, replicated across many families, that has prompted a re-think in the law.

Following a campaign backed by Dame Esther Rantzen, this week Government ministers promised to consider changes to the Children Act 1989 which would prioritise grandparents’ rights in the courts, giving them — and other extended family members — automatic access to grandchildren after a divorce. 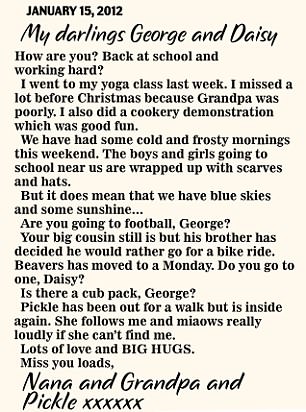 The story prompted a flood of letters in the Mail from grandparents, all describing their despair — often compared to a ‘living bereavement’ — at being cut out of their grandchildren’s lives.

How close-knit and happy Sue’s family was is poignantly evident from her letters.

Her grandchildren went to the same village school as their cousins, two boys aged 13 and 12, who are also estranged from them.

Sue has cherished memories of watching them in nativity plays (her granddaughter as a sheep; her grandson a king) and eating ice creams at the last summer fete they went to together.

Now, all she can do is pass on family news — usually on a card with a cat on the front. They both doted on their own cat, Tinkerbell, and Sue’s cat, Pickle.

There is frequent mention of dad Mark, too. Sue clearly aches with regret for his loss and writes of her sadness on Father’s Day. While Sue holds on to a slender hope that the proposed new ‘grandparents’ law’ might allow her to see her absent grandchildren again she says the legislation might come too late for Grandpa John who, as her letters relate, is in poor health, with heart problems and diabetes.

‘I do worry that they won’t see him again before he dies,’ she says, in tears.

They had been very hands-on grandparents, she says. When their mother worked on Sundays, and Mark was also at work, Sue would drive to their house to look after them. ‘My granddaughter would always fling her arms round me when I arrived.

‘They’d often say, “I love you Nana.” We’d cook together and I still chuckle at the memory of her giving an almighty sneeze into a bowl of coleslaw as she grated some carrot into it.

‘There was always laughter. They’d jump into bed with us in the morning when they stayed overnight.’

There is sadness, too, at the loss of her daughter-in-law, of whom she was very fond.

‘I remember saying to her that I’d seen all my grandchildren before they were 24 hours old, and she reminded me, “You saw your grandson even before that. Remember you were with me at the scan?” That’s how close we were.’ 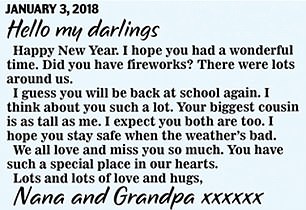 While she accepts that there always are aspects of a divorce that parents are not privy to, she simply wants to be able to share love and affection with her grandchildren.

In one letter she says: ‘It makes me feel so very sad not to see you or have a photo or phone call.’

‘When I write, I always say how very much I love them. And that will never change.’

SUE’S LETTERS OF LOVE AND LONGING

How are you both?

Nana hasn’t forgotten you, but I have been very busy.

I walked 5km with some other ladies to raise money for Cancer Research.

It was a hot sunny day but we raised nearly £3,000. Your Aunty and cousins cheered us on, which was lovely.

Poor Grandpa has had to have his big toe cut off. He was in hospital for ten days and now has a funny shoe on to protect his foot.

I hope your school is going well.

Have you got any sports days coming up? We saw Daddy at your Aunty’s birthday.

He was having water pistol fights with your cousins and they were all very wet.

The pussy cat on the front looks like Pickle, doesn’t she?

Please send a picture or a letter. We would love to hear from you.

Hello my darlings George and Daisy,

Are you on half-term? I expect it will be good to have a rest, George, from your new school — I do hope you are enjoying it.

Are you doing anything for Hallowe’en?

Your cousins came to stay this weekend and cut out their pumpkins.

Then they held them up so that it looked like their faces. I took a picture of them, they looked really spooky.

When they went home we met your Aunty and Uncle and went to watch your cousins play rugby.

Poor Grandpa has to go into hospital again.

Nana is feeling very sad and tired. I think about you every day and love you very much. Lots of love and BIG HUGS

Grandpa is watching football, the sun in shining, but it is VERY windy so I am in the conservatory reading a book.

Hope you are both well and enjoyed your Easter holidays.

I went to see Shaun the Sheep one afternoon. It was good, clever and very funny.

Do you read very much? I enjoy it. I like writing letters, too.

Do you use computers at your school? I think that you would probably know more about it than me and could help me sometimes.

I love you both very much.

BIG HUGS and lots of KISSES

I hope you have had a lovely Easter holiday and not too much chocolate!!!

I made a really yummy pudding when your Aunty and Uncle and cousins came to see us. It had lots of chocolate and cream in it.

Poor Grandpa has to go back into hospital again this week.

I have a singing competition this Saturday, which is quite exciting, but we are all quite nervous.

Please, please, please do write to us. We love you so much and you will always be very special.

How are you both?

I was so sad last weekend on Father’s Day.

I am sure you can remember some of the fun things you did with your lovely dad. He loves you both very much.

We all love and miss you and talk about you, wondering what you are doing, what you are good at at school, what music you like, football teams — so much.

Please don’t forget you have a whole family who love you and would love to see you.

Take good care and if you write to us or ring, it would make us all so happy.

Lots of love and hugs

Well, how are you both?

I hope you both had a good Bank Holiday weekend and have been able to enjoy the sunshine.

Do you have anywhere that you can go swimming?

I’m sorry I’ve not written for ages. Poor Grandpa was in hospital again. He has heart failure and is very weak.

It would cheer him up so much to hear from you.

Daddy and your Aunty keep in touch with me to cheer me up.

I still go to my choir and I have some good friends there. Grandpa doesn’t drive any more which he misses.

I hope school is going well and you both have some good friends.

We love you so much.