Colton Underwood may be the first Bachelor virgin in the franchise — a fact that the series is really playing up this season — but it turns out that one of his contestants is in a very similar boat when it comes to intimacy. Colton’s Bachelor contestant, Heather, has never been kissed, so when it comes to saving themselves for the right person, these two definitely see eye-to-eye. In fact, it could very well be what ends up bonding them throughout the season.

Much like Colton, Heather’s image thus far has centered around the fact that she’s never kissed anybody before. (It’s even listed as her occupation on her official ABC bio.) So the network definitely wants to make you aware of the fact that there are not one, but two virgins on the show this year. Could they end up being each other’s first? That’s something fans are sure to be wondering all throughout Colton’s journey to find love. But since that question most likely won’t be answered for quite some time — fantasy suites are weeks and weeks away right now and it’s really none of our business— let’s take a closer look at this contestant and see what else could make her the ideal match for the new Bachelor. 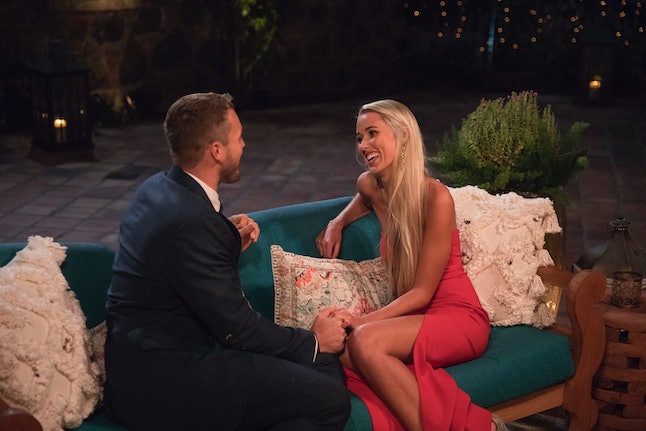 Unfortunately, given how focused the series is on amping up her never-been-kissed status, there’s very little else that we know about Heather, including what her actual job really is. But according to a photo caption on her Instagram, she does really have one. Back in December, she posted about being on Season 23 of The Bachelor and made note of her lack of an occupation listed in the bio. "Tune in to ABC January 7th to watch me voluntarily embarrass myself on national television," she wrote in the caption, while including the hashtags: "#ihaveajob #iswear #helpmeashleyi #oneuppedcolton."

After a little digging, though, Heather’s LinkedIn profile reveals that she’s an Assistant Program Manager at Aethercomm, an electronic manufacturing company located in Carlsbad, California, which is currently where Heather resides. But if things end up going well between her and Colton, perhaps she’ll be up for a little change of scenery.

Other takeaways from Heather’s bio includes the fact that she is the proud owner of a kitty cat, which is aptly named Kitty. (Hopefully the cat gets along with dogs, otherwise that could be a dealbreaker for Colton.) She also describes herself as "a thrill-seeker who enjoys bungee jumping, skydiving and river-rafting." Additionally, she’s afraid of snakes (who isn’t?) and her dream job is being a food critic. Plus, as we learned during last week’s premiere, she also kinda sorta met Colton prior to the show, though it was during a fan photo op, so it was a brief interaction at best.

All-in-all, she seems genuinely sweet and seemingly there for "the right reasons," so odds are she could be sticking around for quite some time this season. She’ll probably also get to experience her very first kiss on national television. Let’s just hope the show allows fans (and Colton) to get to know more about Heather aside from the fact that she’s never been kissed. There’s so much more to both of them outside of their virginities that deserves to be explored.

Money blogger explains how to get £1,274 to start your own business if you're on Universal Credit or benefits